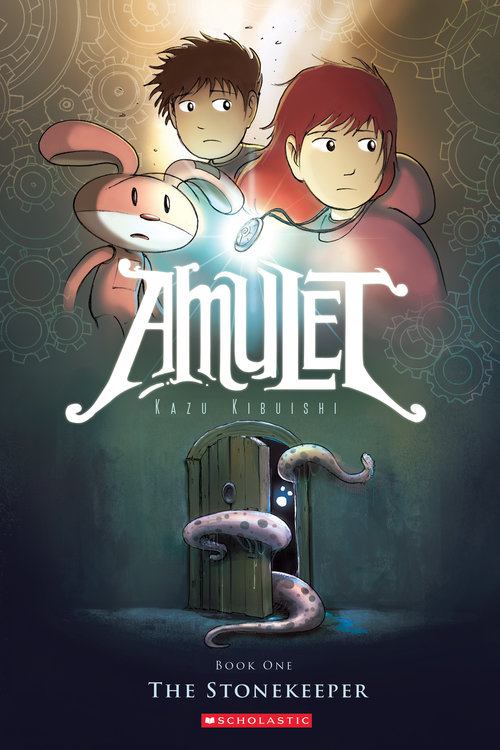 Amulet is currently an eight book series of children’s graphic novels with a ninth (and final) book on the way. This review will cover the overall story as it flows through the first eight books. That said, there may be spoilers for the first couple volumes since certain plot points are pivotal to the development of the story.

When their mother is kidnapped by a strange creature, siblings Emily and Navin follow her to another world armed only with a telepathic glowing necklace. In this new world, they discover a dying uncle, a robot rabbit, a devastating war, and a band of rebels awaiting their command. As the story progresses, Emily hones her magic skills, Navin trains to be a fighter, and their circle of friends and family grows. Each book in the series concludes a story arc which works as a single chapter in the overarching narrative.

Violence/Scary Images: Amulet is a graphic novel series for children, and its objectionable content is limited. The characters are involved in a war, but the violence is on par with Disney movies. Blood is usually relegated to a trickle down the face. While death does occur on and off the page, nothing is graphically portrayed. Disturbing scenes are present, even without the gore. Some characters become possessed by amulets, and others die in heartbreaking ways. I suggest an adult read through before giving it to younger children.

Language: Profanity is virtually nonexistent with one possible h*** or d*** per book, if that.

Drug/Alcohol References: At one point in the story, the children go into a bar to meet someone, and their mother is appalled. This situation is played off with humor, and no one is depicted drunk, even though a couple glasses of beer are shown. 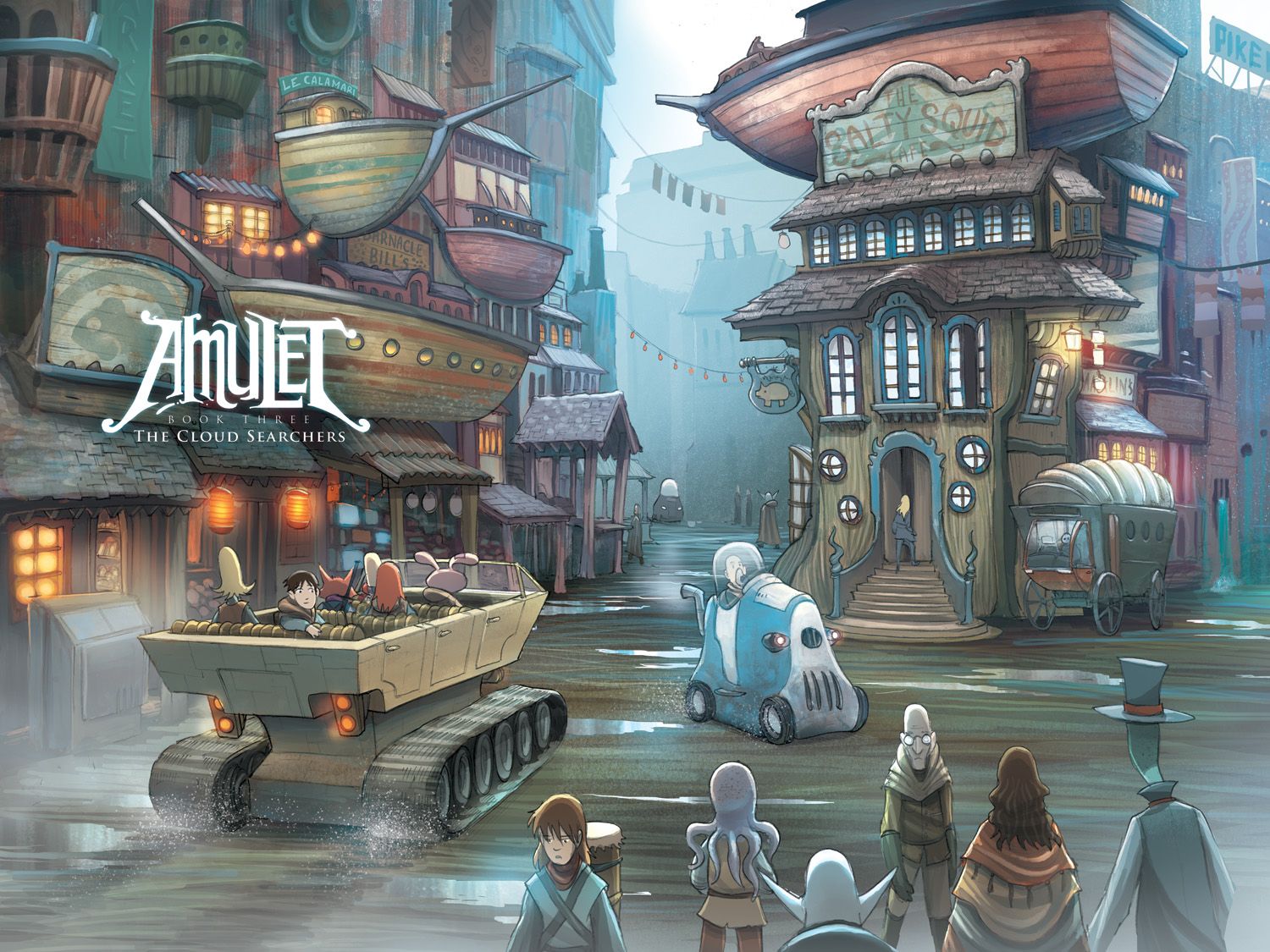 The bar in question, or as Navin insists, “the drinking hole”

Other Negative Content: Some minor characters act prejudiced toward a friendly elf due to their negative experiences with hostile elves in the past.

Positive Content: Amulet is full of positive content. Emily and Navin leap into another world in Book One to save their kidnapped mother. When they learn this fantastical place needs their help, they stay to save it. Character motivations are rarely selfish; when they are, they receive immediate negative consequences. The fight between good and evil is physically seen in the war, but also glimpsed in the characters themselves. Villains become allies, and heroes struggle with inner darkness.

Amulet Book One: The Stonekeeper was published in 2008, and Book Eight: Supernova, followed suit ten years later. Within that time, the series gained a following. A Google search of “Amulet fanart” yields a variety of artists and different takes on characters, including romantic entanglements for platonic relationships. This plethora of original art could be due to the playful character dynamics and incredible illustrations of the books themselves. Amulet practically begs its readers to draw it. 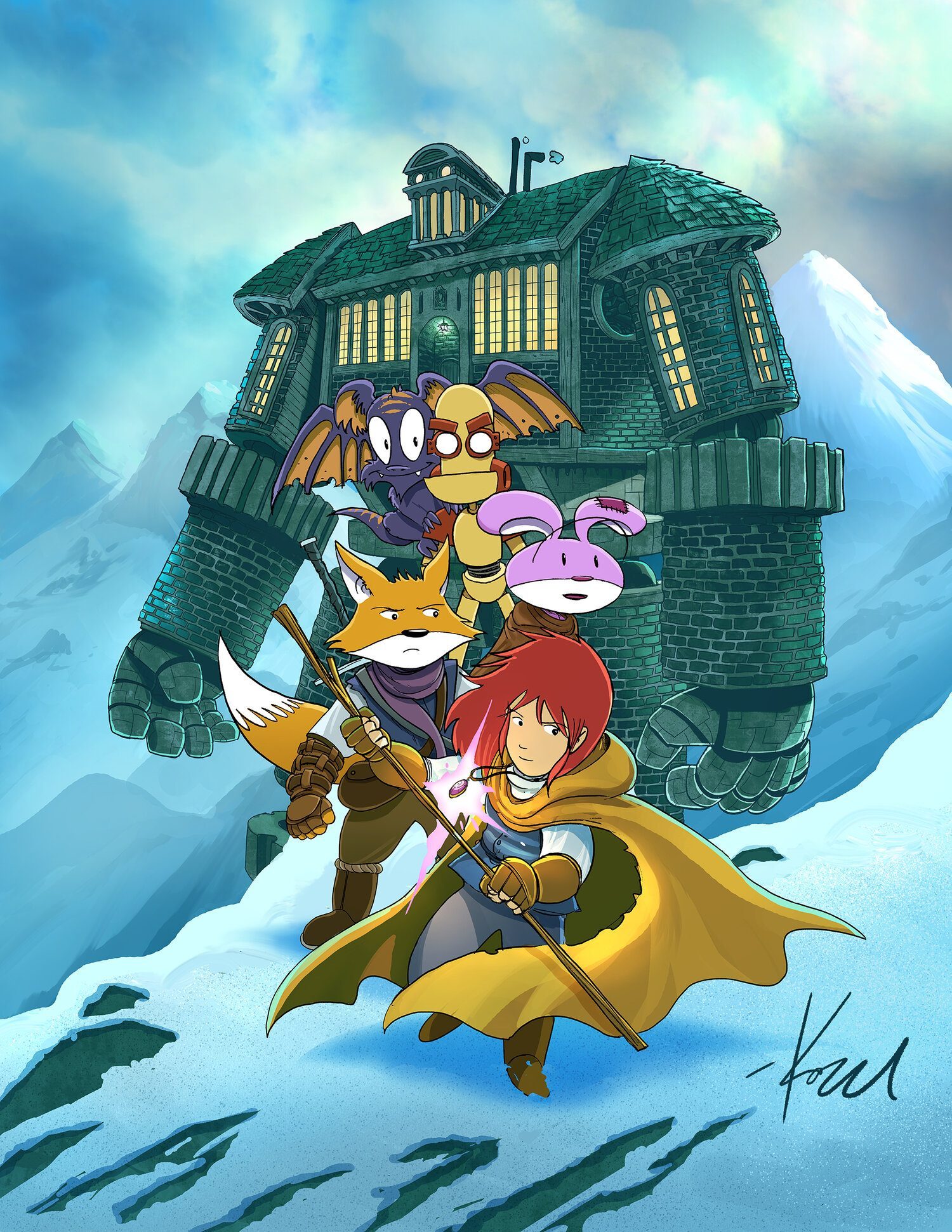 The art is a gorgeous blend of Japanese manga and Western style illustration. Kazu Kibuishi is a fourth generation Japanese American, which allows him a unique perspective in this regard. His character designs showcase personality through exuberant facial expressions and creative clothing. Each volume brings new faces, and readers will find themselves yearning to know more about random people in the background of the pictures.

The real place Kibuishi’s art shines is in its fantasy landscapes. Two page spreads surprise and delight with unorthodox color schemes and fluid shapes. He treats readers to a world they never could have imagined, yet can understand. For example, trees are not usually pink with faces, but in context, this image makes sense. 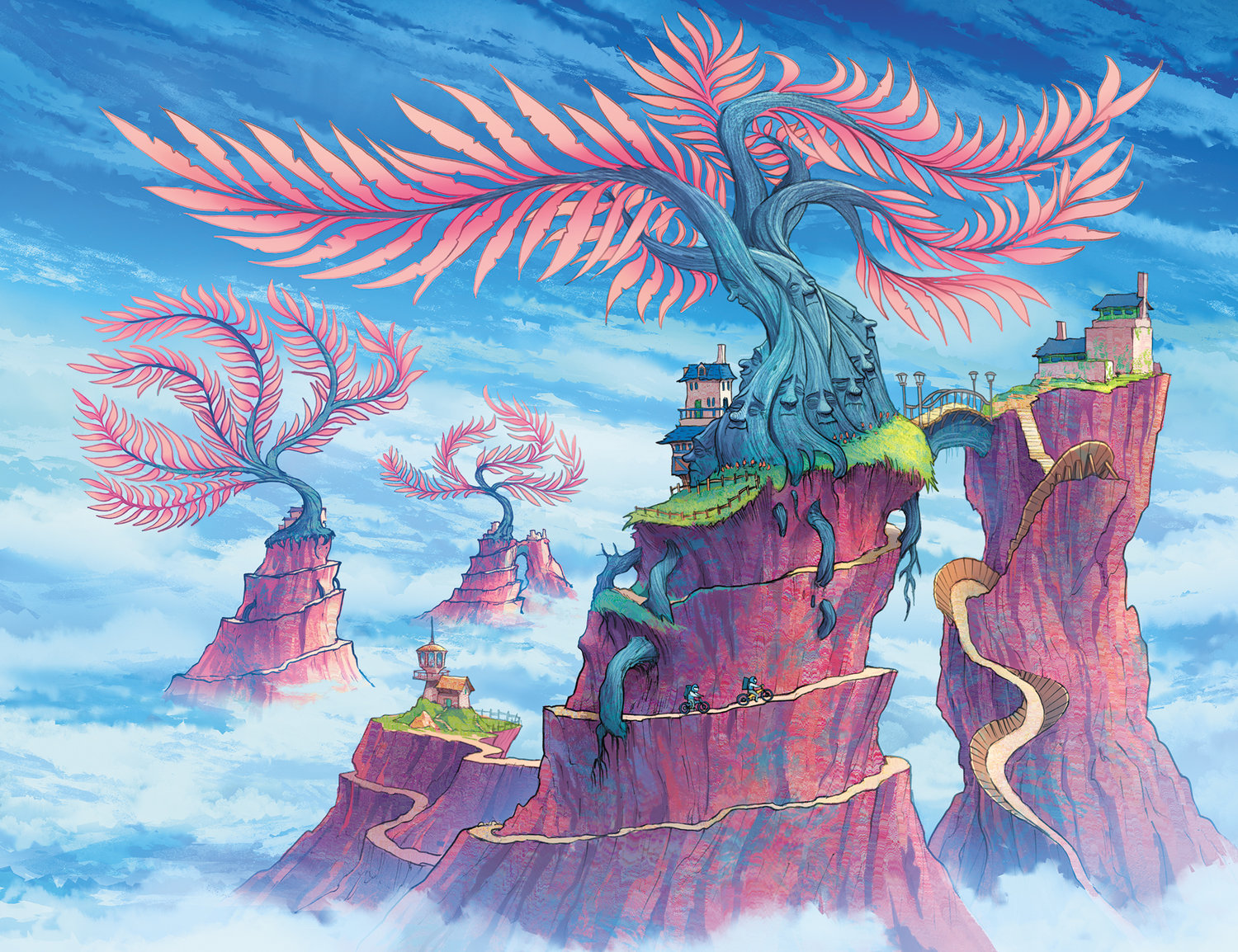 At first glance, the plot of Amulet sounds like an over-done children’s cartoon. Brother and sister find a strange necklace, discover a magical world, make new friends, fulfill a prophecy, and go home. Admittedly, the first book has the feel of a cliché, but everyone has to start somewhere. Emily in Book One is not the same Emily in Book Eight. She transforms from a reclusive, angry girl into a young lady dealing with her inner (and outer) demons. Readers are able to watch her grow and change into the hero she could never be in the first book.

The plot itself holds the same intentions. The Stonekeeper starts as a simple adventure, but later volumes morph into a child-friendly war epic, complete with tragic backstories and morally questionable decisions made by heroes and villains alike. When the party consists solely of Emily, Navin, and a pink metal rabbit, the events are limited to what these three can accomplish alone. However, as new characters and places are introduced, everyone discovers their strengths and teams become specialized. Readers are graced with seeing this conflict from multiple sides, including mech fighting, space travel, fights to the death, and more.

Note Navin in the mech while Emily is on the ground with her magical crew.

Since this is a review of the series as a whole, there is a recurring theme which must be included. However, expect slight spoilers for Books One, Two, and part of Three. Many books, movies, and TV shows include a redemption arc – some part of the story where the villain turns good. However, some of these recent so-called redemption arcs follow an unsettling trend. The redeemed character usually dies. This seems to defeat the purpose. If you are really redeemed, why do you have to sacrifice yourself to prove it?

Amulet breaks this trope by showing us what a real redemption arc can look like. Trellis is the elf prince, heir to a throne of corruption and bloodshed. Throughout Books One and Two, he tries to destroy Emily in an act of rebellion against his father. In fact, Emily’s amulet advises her to kill him before he can finish them off. However, the girl spares his life, leaving him vulnerable and confused. When his father sends assassins to kill him, Trellis decides to trust Emily’s goodness and joins her cause. 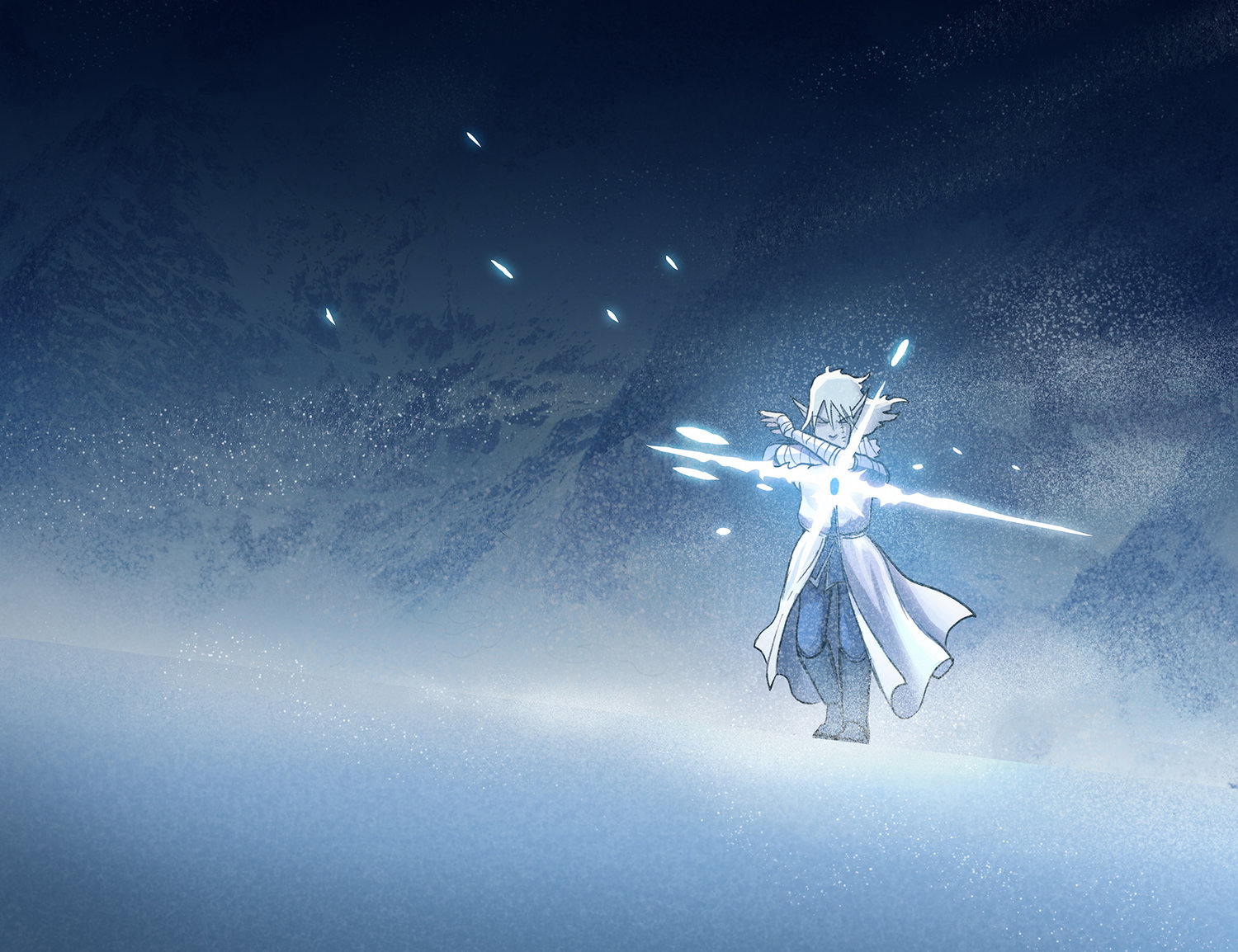 The former prince does not look for opportunities to die for his crimes. Instead, he spends the rest of the series saving innocents and undoing the damage caused by his father. When Emily struggles with her own darkness, he reminds her of the strength of doing what is right. He does not try to sacrifice himself for the greater good, for he has no need. Trellis understands the truth of forgiveness, a truth Christians should feel in their soul.

Amulet may be marketed toward children, but it is a delight for all ages. Its beautiful art is something out of a dream while its characters are rooted in the trials and growth of reality. If you want a clean story with some predictable aspects but also like to be surprised, Amulet will not disappoint.

The following video is a trailer for the eighth book. It is the perfect way to introduce the series, but beware of spoilers.

The Amulet series starts cliché, but develops into a well-rounded story with empathetic characters. It is a fun, clean adventure for young and old.