Assassin’s Creed began several years ago as a video game and has since become a wildly popular franchise. Now there is a host of games, each title different from the last with its own ups and downs in the series. In addition, it has also sparked a comic series produced by Titan Comics. They have taken the name and created a new story, but not one that is completely unfamiliar to fans of Assassin’s Creed.

Editor’s Note: Titan Comics graciously gave GUG this comic for an honest review. Please note that this issue happens in the middle of a series.

The main characters are already being held captive at the beginning of the issue; their captor wields a knife and threatens to gut them and, a little later. to take some fingers. However, he doesn’t get the chance, as they escape. Their captor is then thrown from the top of a wall when he gives chase. A man is shown with a spear through his neck. Outside the Animus, in the real world, Charlotte elbows a man in the jaw. A disembodied ear is shown.

A few instances of foul language. God’s name is taken in vain once, the words h***, a**, and bulls*** are each used once. A character is cut off before he can get the full word out, but it’s obvious he meant to say f***.

A character towards the beginning says he needs a drink. He later busts into a room, obviously drunk as he holds a mug, is hiccuping between words, and stumbles to the ground face first.

During the confrontation, after being taken out of the Animus, Charlotte shows a lack of respect for the decisions made by those who were seemingly put in charge.

Quila shows devotion to her duty as a Chasqui. Her passion for the truth and her desire to save the life of her emperor is also admirable. Charlotte stands for what she believes in. She saves a man who is being assaulted by a rather large brute while giving herself a pep talk about “sticking up for the little man, and stopping the bad guys.”

This issue opens with our heroes in bonds, being held by a madman with a knife. Once our heroes make their escape, they part ways over a disagreement. One heads off to get a drink, the other sets out to thwart a plan to murder the emperor.

After Quila is told to go home and stop spinning lies, she does exactly that. She goes back to the home that she left. Her former husband, Ayar, walks in and she fixes him a meal. After they’ve talked, she goes before his father, her former father-in-law and asks for an audience with the emperor. He refuses and later has her arrested and sentenced to death. The reason for this decision is twofold. First, the emperor believes that once Quila left his son, she brought shame to his son and to his family. Second, the 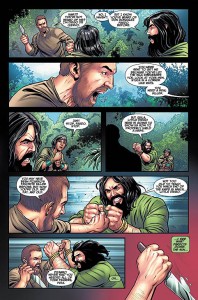 emperor truly believes that Quila is telling lies and seeks to cause discord among them on the eve of a great victory. On top of all this, Pardo bursts into the room — not a particularly wise thing to do since he is a Spanish Conquistador and they are Inca. Quila defends him and is sentenced to death consequently.

At this point, Charlotte is taken out of the Animus and a disagreement ensues,which results in her storming out. Once she’s had some time to walk it off, Galina finds her and reveals  that Charlotte going off on her own may have done more harm than good as the issue closes with a dramatic cliffhanger.

Assassin’s Creed can’t be a necessarily easy story to write, as there are two different stories to consider: one inside the Animus, in the memories of Charlotte’s ancestor’s, and one in the real world. Of course, these stories intertwine, but there are still events happening in both places that differ from each other. I was pulled into the story of Quila and Pardo, but once Charlotte was pulled out of the Animus, it was a difficult to switch gears to present day because I wanted to know what happens to Quila. Even so, the writers did a good job of making the transition and I found my focus shifting to present day as the drama ensued there.

The characters are all believable and I found myself rooting for them without even knowing the background of the story. This is the only issue of this story arc that I’ve read and I have to say that I was pleasantly surprised. I could almost feel Quila’s passion, Pardo’s protective instincts, and Charlotte’s desire to complete the task that she’s set out to do.

The art is quality and realistic. Despite being a comic, I could see the intensity and passion behind each character. The settings are all drawn with great detail.

The story was interesting. Fast paced action at the beginning into the dialogue between the characters was all well done and well thought out. More than anything, it felt like an Assassin’s Creed story. The transition from the Animus to present day was smooth and the story arc in the separate places is intertwined, but the character’s struggles were different in each place.

Overall, I enjoyed Assassin’s Creed #8. I like that they’ve taken on this new venture; it’s different from anything we’ve seen so far in the franchise. It is a classic good-triumphs-over-evil story, and I look forward to seeing what else they have in store.

+ The story is fluid, even when changing gears from animus to present day. + Characters are well written.

- The narration is a little confusing at first.

Assassin's Creed#8 is a well written, well thought-out comic. It's solid art, passionate characters, and fluid storytelling all make for an entertaining read, as long as you've read the comics that come before it.

Vince is a husband, father, and children's pastor in addition to the work he does for Geeks Under Grace.