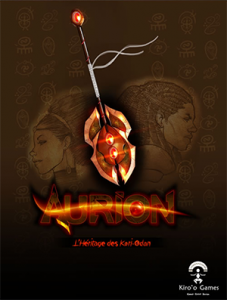 It has been three years since I wrote my review of Aurion: Legacy of the Kori-Odan for PC. Yet when Kiro’o Games recently informed me that not only would they be publishing a comic book version of their game, but they also would be sending me a copy, the indie developer turned publisher reignited passion that I had experienced during my first playthrough of Aurion. Of course I accepted, and that is what brings us here, once again, to the unparalleled land of Aurioma. 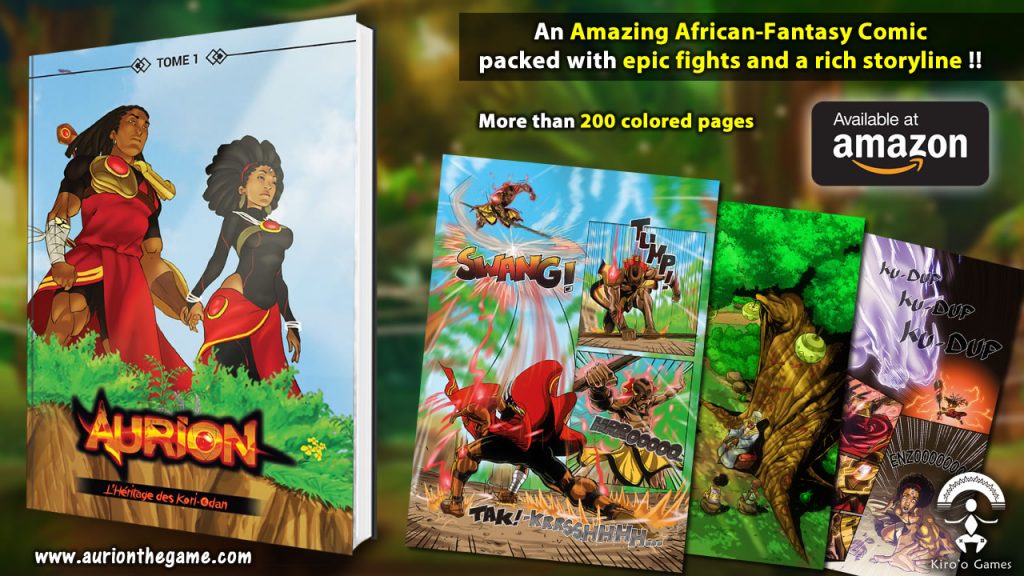 The only contents our readers should worry about here is that of their wallets!

I once again direct our readers to my original review of the Aurion game, for this book is an adaptation. Keep in mind that there is less room for what some may consider inappropriate material due to the textual format. Even so, Aurion the game raised little concern.

I will say this: sometimes, we at Geeks Under Grace include a Positive Content category for our content guides. I did not do so in my review of Aurion in the game, but I will say here that it is a story concerning the pursuit of the question of one’s purpose in life. Cliché notwithstanding, as the title indicates, Aurion is a story about legacy—kindred. Specifically encouraging is that the portrayal of marital relations between protagonists Enzo and  Erine is the most powerful that I have seen in fiction, even more than the couples featured in our very own Michael Mendis’ article, “Positive Marriages in Gaming.” In the examples he discusses, the main protagonists go on their adventures while their wives appear when danger to them is minimal; here in Aurion, Enzo and Erine brave the perils together. 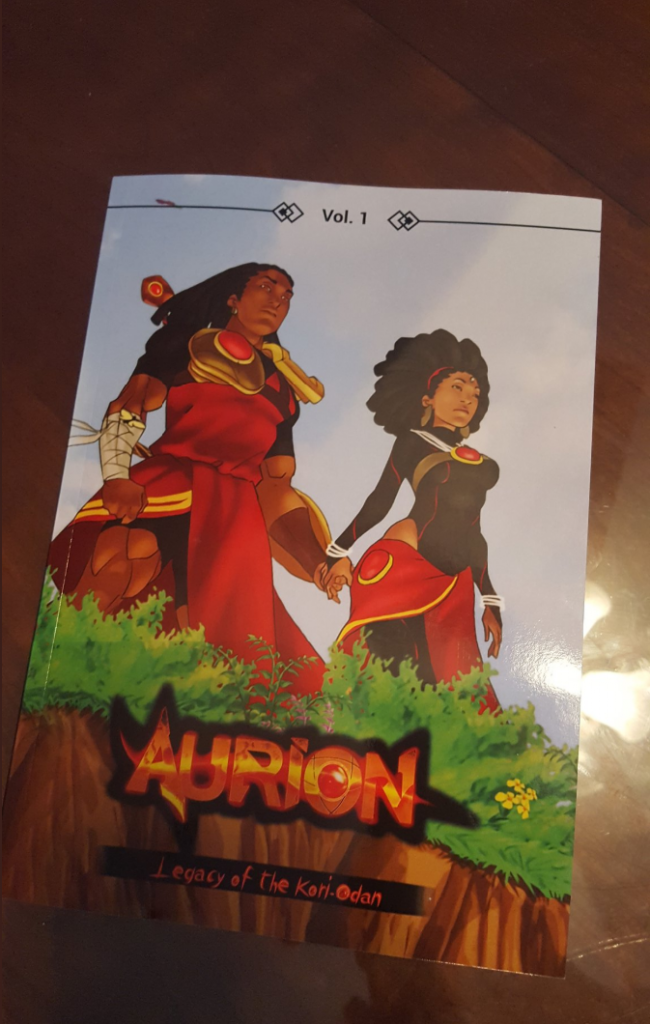 I am loving the glossy finish, and that powerful hand-holding…even if I might have selected a different image for the cover art.

An inherent problem with adaptations is that those already familiar with the material will consume the content in the new content but with expectations stemming from their experience with the original. Some do so with a more critical eye, while others simply might be grateful to get more, regardless of alterations to the lore. I am on the fence—I am excited for more Aurion, yet this book makes me yearn for the scope of the video game, beyond the limitations of a finite number of pages. 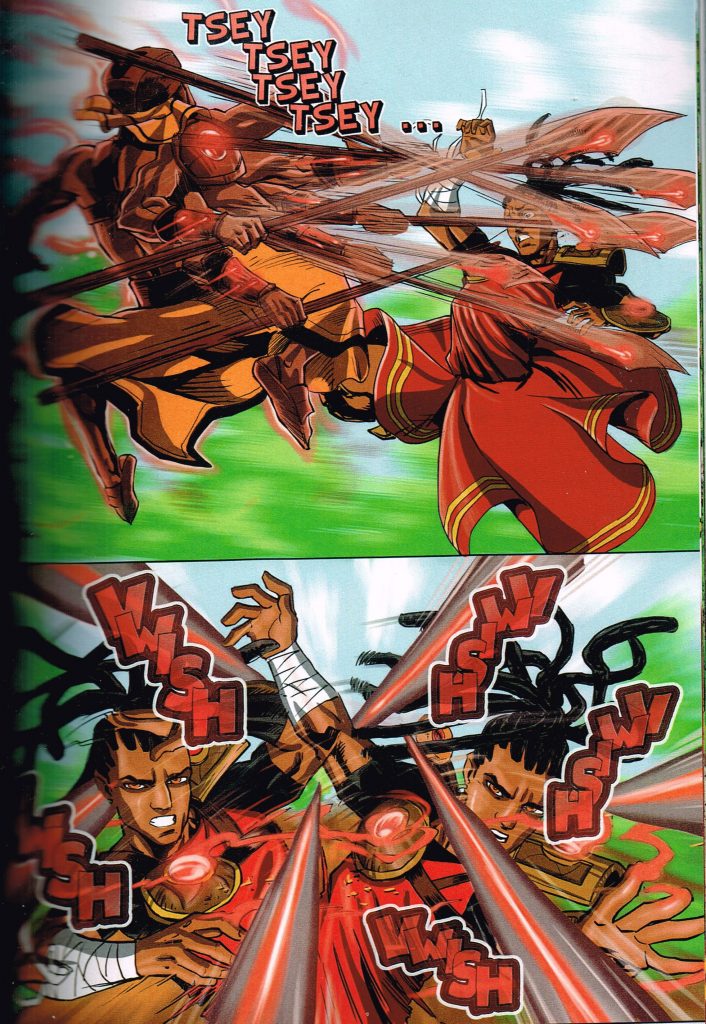 Perhaps that is the point: this comic serves the purpose of luring people into playing the video game. After all, the Aurion comic adaptation began as a free online publication. Kiro’o noticed 100k downloads and received a lot of positive feedback, encouraging the developer to test the waters of print publication. For that, I am glad, because while my children were not yet old enough to have the patience to play Aurion in 2016, in 2019, all three of them have all devoured Aurion as a graphic novel, and eagerly await the next volume. 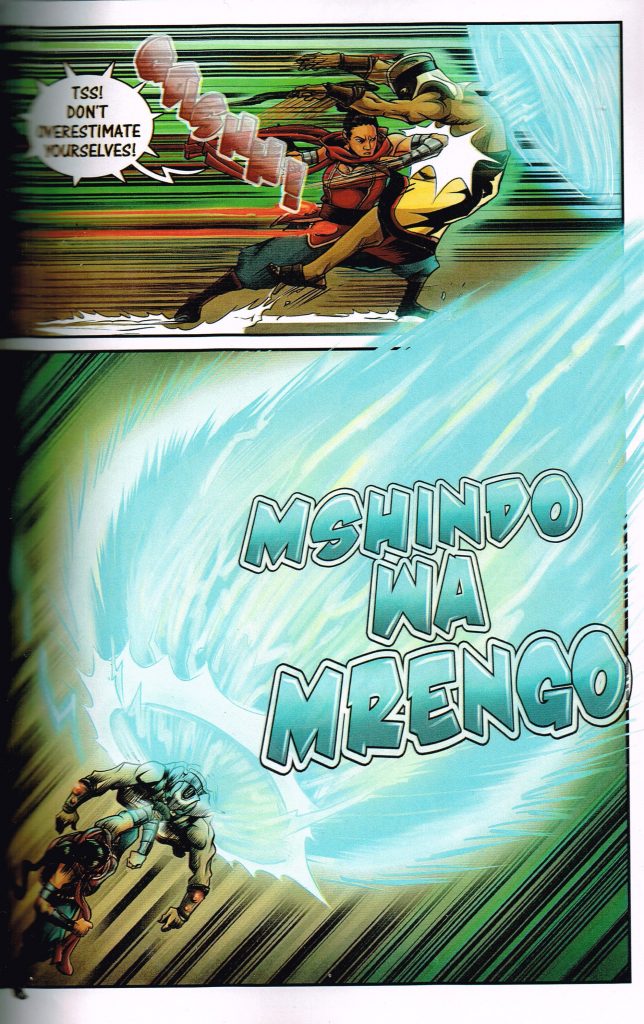 I swear I remember Vegeta or some other DBZ character hit someone this hard. Well, they can do this in Zama, too.

I share their sentiment, because this volume ends with Enzo battling his step-brother (Erine’s brother) Ngarba, while in the game, this confrontation is the final setpiece in what I would consider an introduction in an RPG. At the very least, readers will know that Enzo is the king of Zama, or “the land without walls,” and Erine is his queen. They will also know the name of Nama, Enzo’s  Ju’u (teacher/trainer), and learn that neither are no slouches. As auronics, they are able to repel an invasion of Zama, but at great personal cost to all involved. 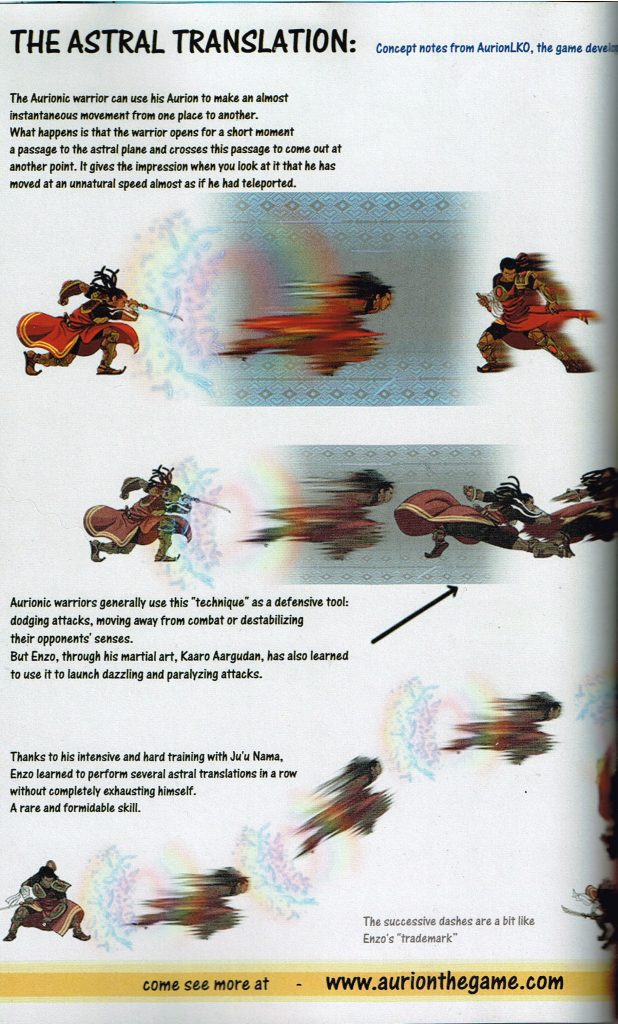 A highlight of this graphic novel ais re its descriptions of aurionic powers. Here, Enzo demonstrates how he moves faster than the untrained eye can see.

What is an aurionic? Well, I find the answers to questions like these the best part of this comic! Its expositions explain how things in this unfamiliar world work. After all,  Aurion is an original story penned by Cameroonian Oliver Madiba et. al., so there is plenty to learn. The text sufficiently addresses “what” questions concerning aurionite and auronics, but Auriona itself will need to be fleshed out in future volumes. 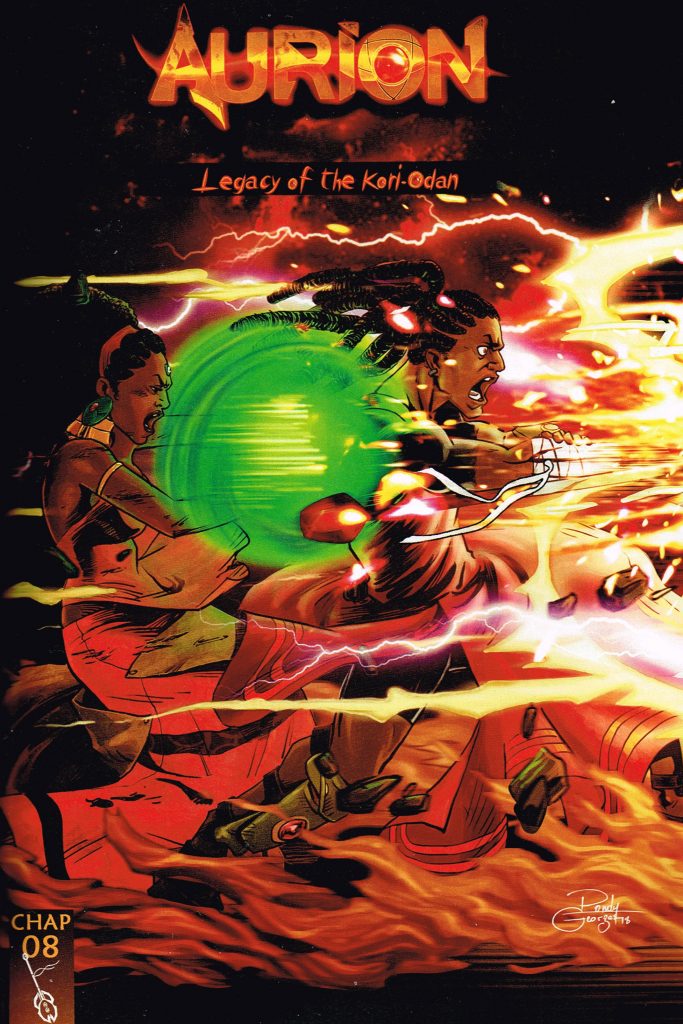 Cover art for one of the book’s chapters: a “family kamehameha,” except that it is called a “KORI-ODAN!” Just say it the same way Ryu says “Hadouken.”

As this Cameroon is a francophone country, this book contains a few translation issues. Even though I love the intent of the caption that appears between every chapter in the graphic novel, “A story without orcs, elves, dragons, angel or ninjas…well, maybe ninjas….” the word “angel” should also be plural; every time this caption appears, it is  excruciating for my brain. The few other localization errors within the text are comparatively negligible.

Aurion is a humorous game, but that does not translate well to the text. After all, the game would play Jean Yves Bassangna’s “Little Man” to initiate a humorous situation; of course, that is not possible in this format. The game also alludes to deeper topics concerning imperialism, but that is absent in the graphic novel. Because of this, Aurion Vol. 1 adheres to the conventions of a standard comic book: an introduction to the hero and their capabilities.

Perhaps the complexity of the story will improve in future volumes, but for now, the artwork and fighting sequences meet the expectations established in the game. I have compared Aurion to DBZ and Avatar: the Last Airbender; fans of the former will be pleased with what they read, while fans of the latter will have to wait until Enzo “levels up” his legacy in future publications. 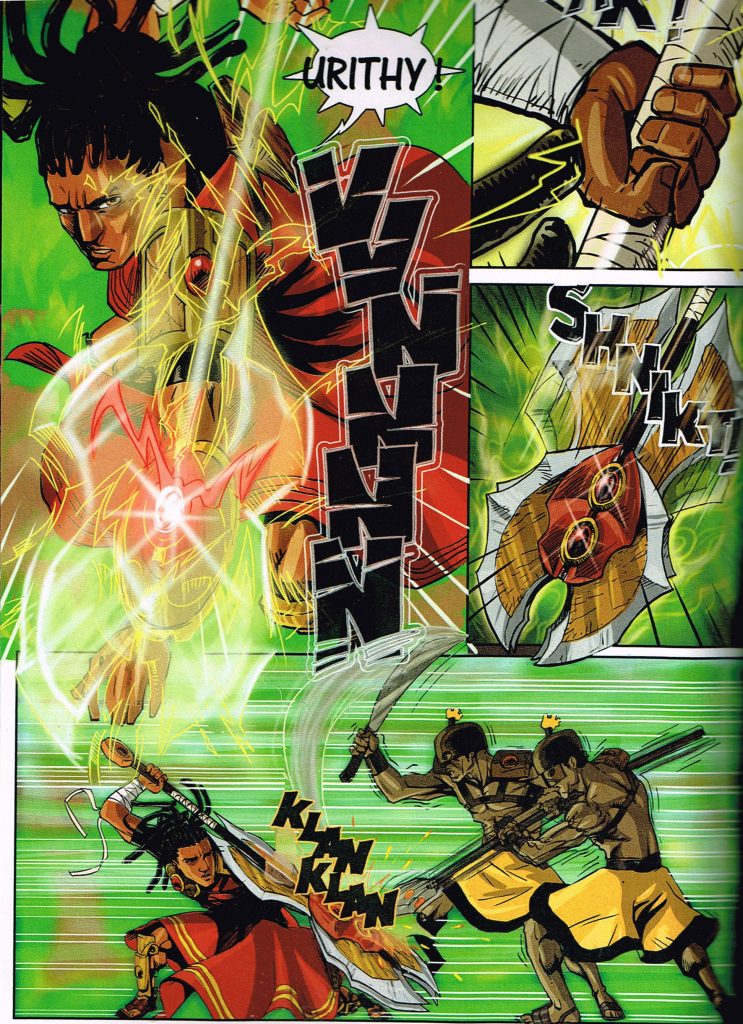 Playing the game, I did wonder where Enzo kept that awesome ceremonial spear. Now I know that it’s magical, or, aurionic!

Overall, I am pleased with Aurion: Legacy of the Kori-Odan (Vol 1). The expansion this book offers on the subject of Aurionic lore alone renders this text worth the asking price, which, at $40 USD, is no small cost. Potential buyers should take solace in the fact that even in this post-Black Panther world, Aurion remains a unique story, both in terms of Auriona itself, and also because of Kiro’o Games’ independent efforts; they are to Cameroon what Andrzej Sapkowski is to Poland. Fans of fantasy have little reason to skip out on this unless their concepts of fantasy are limited to elves, dwarves, and dragons. Pointedly, those who claim that they would like to see more Afro-fantasy should most definitely put their money where their mouths are, and I cannot think of a better opportunity to do so than with Aurion.

The graphic novel adaptation of Aurion: Legacy of the Kori-Odan is a worthy purchase for enthusiasts of fantasy and graphic novels.