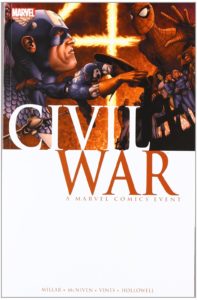 Fans of the Marvel Cinematic Universe’s 2016 outing Captain America: Civil War may recall a scene where Vision (Paul Bettany) suggests that the very existence of superheroes breeds discord. Their fantastic deeds of heroism invite challengers who wish to oppose their dynamic strength and will not hesitate to spread destruction and death. Hence, one reason why heroes need to be brought under government control. Tony Stark (Robert Downey Jr.) agrees; Steve Rogers (Chris Evans) doesn’t.

A decade prior to Team Iron Man and Team Captain America’s on-screen collision, the two sides fought on the printed page. Similar philosophical lines were drawn in Mark Millar (The Ultimates, Superior, Wanted, Kingsman) and Steve McNiven’s (Death of Wolverine, Marvel Knights 4) Civil War comic series, paralleling the film’s questions about responsibility. The limited series bore a tagline, an inquiry directed towards both the narrative’s costumed cast and the series’ audience as they debated the morals of each opposing side of heroes: “Whose side are you on?”

Violence: Civil War opens with an incident where an explosion kills over 600 people, including 60 children at a nearby school. Though the explosion itself is devastating, we don’t witness the immediate carnage. We are treated to scenes of the explosion’s aftermath, including limp bodies and injured civilians. Battles, on both larger and smaller scales, erupt between superhumans throughout the book. Pages are awash with characters throwing punches, firing lighting, and shooting energy rays and guns. Blood and teeth occasionally fly. One character is mugged by a mob early on. A hero is severely wounded by two criminals. Several villains are shot. Another hero is killed by a blast through his chest. We witness an illusion depicting the aftermath of a genocide.

Sexual Content: Some female characters wear low-cut or otherwise revealing outfits. An illicit relationship between two characters is implied. Siblings pretend to be married in order to hide their true identities. A character makes a crude joke about someone’s name. A wife mentions intercourse with her husband.

Drug/Alcohol Use: Someone mentions drinking wine in a letter. Another character is said to be “doped-up” on anti-depressants. Though unwillingly, a hero inhales hallucinogenic vapors.

Spiritual Content: A priest prays at a memorial service. A character calls another character “Judas.” A character chooses to address conflict through fasting and meditation.

Language/Crude Humor: Several uses of God and Jesus’ name in vain, as well as h**l and d**n. A** appears a handful of times, plus one use of b***h, a bleeped-out curse, and one unfinished “Son of a…”.

Other Negative Content: Characters frequently blame each other and occasionally hurl insults. A woman spits on a man in anger. A group of heroes fight crime for a popular TV show. Villains are brought in to work alongside heroes. A hero betrays her teammates. Another character clones a dead superhero.

Positive Content: A man pays for a friend’s funeral expenses. Heroes regularly come to each other’s aid during battle. A husband leaps in the way of an attack meant for his wife. Initially, heroes discuss their options and, even as tensions escalate, some sue for peace instead of violence.

It happens in an instant. Nitro, a supervillain with the ability to self-detonate his physical body, devastates a section of Stamford, Connecticut in an effort to wipe out the New Warriors, a team of superheroes fighting crime for a popular reality TV show. The damage is immense, the death toll shocking. 600 people, gone in the time it takes to snap one’s fingers. 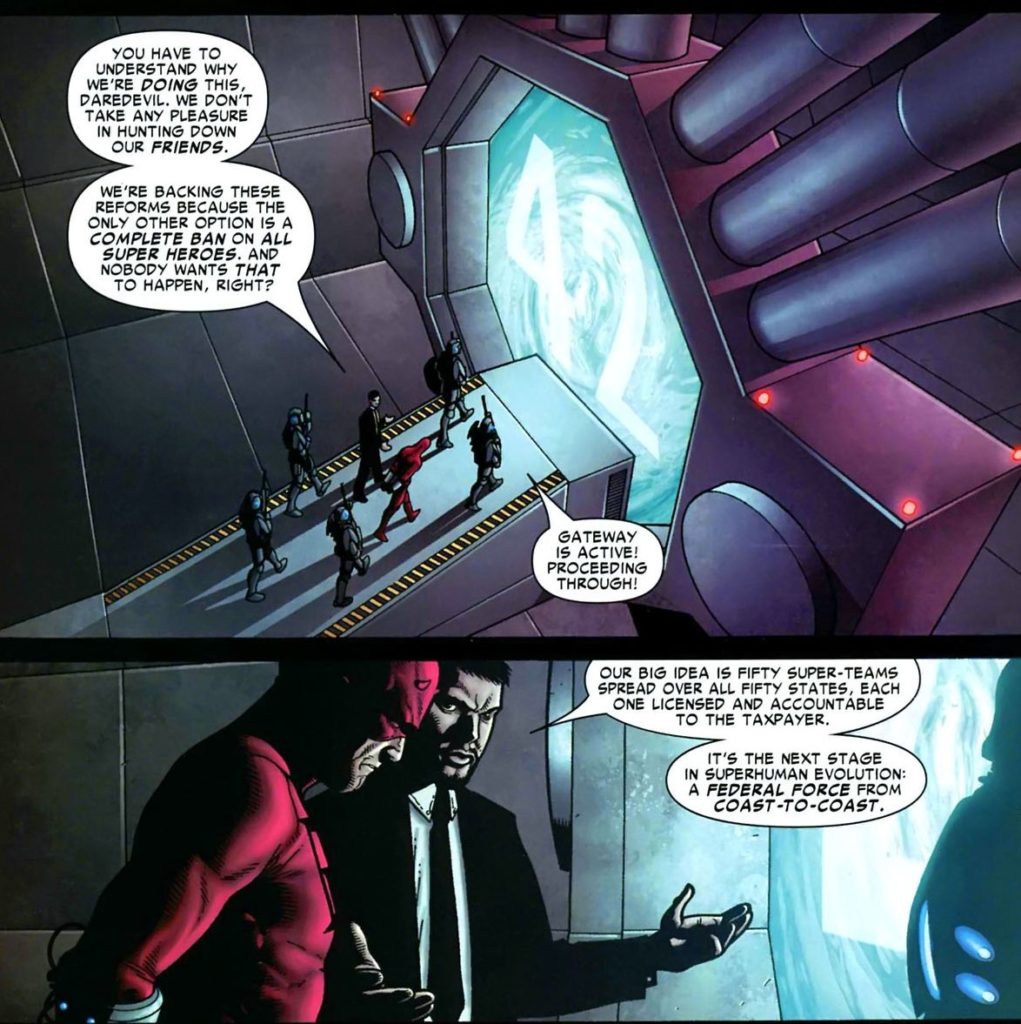 In the wake of Stamford, the government passes the Superhero Registration Act, declaring that all known superhuman individuals should, essentially, become civil servants. Vigilantes like Spider-Man and Daredevil, heroes like Dr. Strange and Captain America, and even teams like the Fantastic Four and X-Men are all instructed to conform to a system intending to regulate their abilities in order to curb casualties. The consequence for not registering is imprisonment in a giant, off-world concentration camp. It’s now illegal to run around with a mask, independent of oversight. Similar to the movie’s portrayal of the Act’s unintended fallout, Captain America forms a resistance group, a faction of the superhuman community splintering off and fighting for their freedom. Conversely, industrialist Tony Stark sides with the government.

As Millar presents this Civil War, two ideologies arise. For Iron Man’s pro-Registration camp, it’s a question of priorities — is the suspension of certain civil liberties (a hero’s ability to fight crime unhindered by governmental oversight) and implementation of seemingly unethical practices (imprisonment in the Negative Zone) acceptable if the greater good is achieved? For Captain America, it’s a question of personal freedoms (not surprising for a guy with “America” in his moniker) — if a hero’s identity and core values become a matter of legislation over personal responsibility, should that new norm be conformed to or fought against?

For such a provocative premise, Civil War doesn’t wholly live up to its lofty ideals. Characters are certainly waging a war of principles, but the philosophical differences come across as merely a reason for why characters trade blows rather than serving as the deep-seated underpinnings for such a conflict. Captain America, a paragon of freedom, certainly has an understandable position. However, his vaunted cries for independence, well planted by Millar earlier in the series, become muted once he rallies his forces and engages in combat. Iron Man, driven by sympathy for Stamford’s victims and a desire to keep the superhuman community responsible, seems to lose sight of his mission when he helps create a robot clone of Thor. This new Thor murders a friend and starts imprisoning former allies without trial. The series lacks any serious commentary about responsibility or the role of government in the lives of superhuman activities. While one side clearly wins by the story’s end, you’re left unsure whether the right conclusion has been reached.

This does not result in Millar’s characterizations feeling out of touch, however. Both Cap’s and Iron Man’s positions make perfect sense, given their histories. Cap’s legacy as a World War II veteran fuels his desire to thwart (what he sees as) government-sponsored injustice, while Stark’s history of alcoholism allows him to understand how destructive a lack of personal responsibility can be. Knowing this as you read, you are able to view both men through a fairly complicated lens. Their differences may not be significantly fleshed out and some of their actions may be questionable, but their individual approaches to the conflict are well written. Cap’s staunch resolution keeps him fighting until the final pages of the series, and Iron Man’s dedication pushes him to enforce his principles, controversial though some of his tactics are. 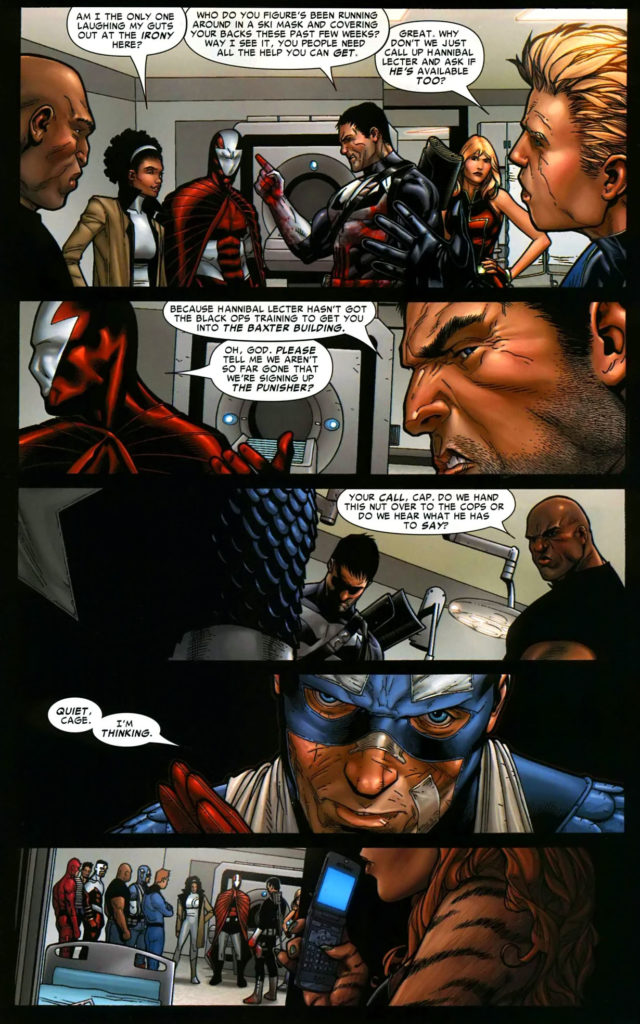 Millar straddles a fine line between wholly supporting one character and demonizing the other. Maintaining this crucial balancing act, the author keeps both Iron Man and Captain America in a moral “gray” area, allowing the reader to struggle over who they would choose to follow. The war veteran with a heart of gold, operating outside the law? Or the armored billionaire seeking to help the nation by enforcing mandated, regulated superhuman activity?

Within both camps, complex characterization flourishes. After the robotic Thor murders a hero, pro-Registration members Mr. Fantastic and Yellowjacket express dismay and remorse at the clone’s actions. The Punisher, though brutal in his modus operandi when it comes to fighting criminals, pledges himself to the resistance out of an unorthodox moral code. Spider-Man and the Invisible Woman, doubting the pro-Registration side’s motives and methods, switch to Cap’s camp and choose to fight against Stark and his allies. In several instances of “show, don’t tell,” Millar allows his characters to respond to the actions of others, proving that even in a war between two sides, not all combatants fall under the philosophical umbrellas of one faction or the other.

Interwoven through the seven-issue storyline are several subplots pertaining to various characters: Spider-Man unmasking in front of the world as a sign of solidarity with Iron Man, Black Panther’s choice to leave Wakanda and engage in the American conflict, and Mr. Fantastic and the Invisible Woman’s eroding relationship. These subplots are addressed more directly in various other series, but Millar juggles the narrative strands where he’s able to enhance his story. A few scenes feel a little rushed or unexplained. For example, X-Men member Bishop asks to talk with Tony after Emma Frost says the X-Men are remaining neutral, but the Stark/Bishop conversation and Bishop’s decision to join the pro-Registration side are never witnessed. Aside from an awkward moment or two, Millar properly incentivizes readers to check out tie-in series and issues focused on other heroes without making his tale feel incomplete. 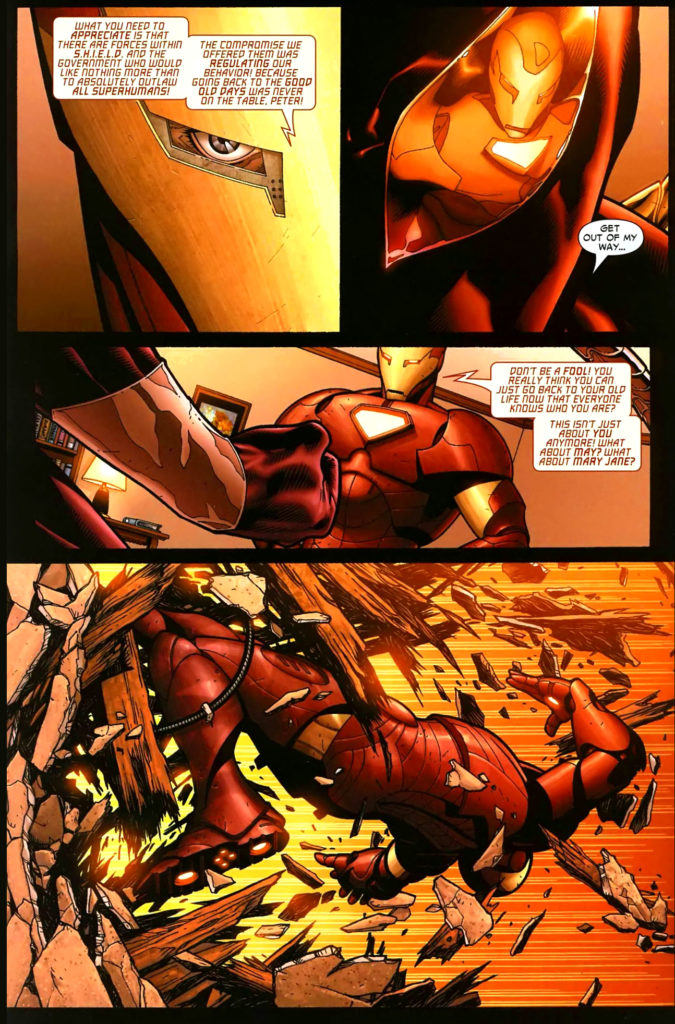 All of this is lovingly rendered by Steve McNiven. McNiven’s art doesn’t quite reach “photo-realistic” quality like Alex Ross achieves, but it is certainly more realistic than cartoonish. His people look like individuals you’d meet on the street, proportionally accurate and etched with enough detail to feel real. The action sequences are epic, each motion fluid, and each blow weighty. When Spider-Man wallops Mr. Fantastic or Captain America stomps Bishop into the ground, you can picture a whole scene in your mind, even from static images. McNiven’s art doesn’t fully balance out the weaknesses in Millar’s script, but it makes even those flawed moments engaging to behold.

A financially successful blockbuster, Civil War is perhaps not as groundbreaking as it strives to be. Nonetheless, the series is engaging, if primarily for its characters and the difficult choices they make in the face of oncoming war. The world of Civil War is one of absolutes. Though nuanced in their individual portrayals, each character is forced to select one of two sides, with only one of those factions coming out on top by the story’s end. Gray subjectivity may dilute some of the black-and-white objectiveness of each side’s philosophical rhetoric, but Millar always reminds readers that, at their core, both factions fight for a moral code. While never addressing audiences directly, the author makes it clear that, in a world where your beliefs and assertions will come under fire, you need to be willing to take a stand. We may never slug it out in the concrete belly of New York; but in matters of faith, race, morals, stewardship, and other areas, we still need to have an answer when the question comes:

“Whose side are you on?”

Millar and McNiven create an epic superhero romp that doesn't quite reach the philosophical zenith it claws its way towards. Regardless, Millar's strong characters and subplotting combined with McNiven's artistic flair make the series an engaging narrative for fans looking for an entertaining beat-em-up between premier Marvel superheroes.