Through the many decades that Wolverine’s been around he’s had quite the journey. Joining world wars, life in Japan, Weapon X, the X-Men, even becoming the head of the Jean Grey School for Higher Learning—Logan’s story seems endless. For now, however, it may be time to say goodbye (or see you later—this is comics, you know) to one of the most beloved X-Men characters.

Writer Charles Soule (whose work includes the current Inhumans and She-Hulk run) creates some of his best work in this miniseries. Contained in just four issues, the storytelling is remarkably cohesive. Wolverine, who can now feel pain, describes everything he feels as it happens. His inner monologues detail new smells and the first feelings of the breeze. Wolverine likely knows his end is coming; he’s taking time to enjoy things he often overlooked. The pacing of the story is extremely well done; there are no pages that seem slow or out of place.

One of my favorite aspects of this book is Steve McNiven’s art. This may be strange considering how much blood there is, but the pages are beautiful. McNiven’s intricate artwork makes each issue worth detailed study. We get to see Logan’s contemplative expressions; we experience the pain of each punch with him. The lines are crisp and the colors are rich. It’s interesting comparing the colors used in each of the issues. Issue #2 uses lots of greens and darker colors, while issue #3 has pink cherry blossoms and other pleasant color choices. Overall, this mini-series contains some of my new favorite Wolverine illustrations. 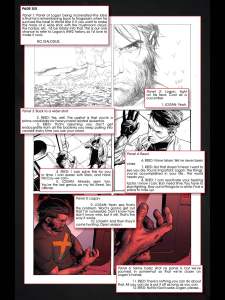 At the end of each issue, we have some of the best bonus features I’ve ever seen in a single issue. In the comic industry, many publishers save commentary and behind-the-scenes pages for trade paperback or hardcover releases of a story. Thankfully, Marvel didn’t hold back this time. Each issue of Death of Wolverine contains artist commentary and preliminary sketches. It was wonderful to see the original script next to individual panels. As someone who is writing his own graphic novel, I appreciate it when I can see professionals and their artistic process. If you are a fan of bonus features, you’re going to love what they have put together.

As we know, Wolverine is the best at what he does, but what he does isn’t very nice. So Death of Wolverine definitely has its share of mature content. This mini-series is officially rated for Teen+ readers. As to be expected by the nature of Wolverine and the plot summary, there’s a lot of violence and blood. We see eyes poked out, a man’s face crushed by repeated head-butting, someone’s hand severed—and that’s just off the top of my head. Needless to say, there’s a lot of graphic violence in the story that may be an issue for some readers. There’s also alcohol use and a few curse words spread among the four issues. There is a reference to suicide which may be difficult for some readers. An evil spirit temporarily possesses a character. Finally, on the cover of the fourth issue, Wolverine is featured naked, held in the arms of Death, though nothing is shown in detail.

Death of Wolverine begins with Reed Richards (of the Fantastic Four) testing Logan. Richards delivers bad news, but says that he can bring back Logan’s healing factor, he just needs time. He tells Logan to not use his claws. (Yeah, we’ll see how long that lasts.)

Shortly after, we find out that Wolverine has been living on a small island to help isolate himself from any enemies. Unfortunately, the seclusion does not last long; someone has placed a bounty on his head. This, of course, brings hundreds of bounty hunters to capture Logan. 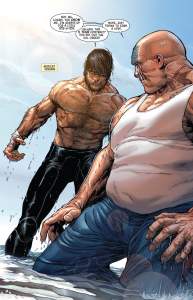 Realizing that his only chance at peace lies in stopping the originator of the bounty, Wolverine sets out on his journey. His first stop? Madripoor. Undercover, Logan finds Viper and a chained up Sabertooth in charge. After his cover is blown, Wolverine fights Sabertooth to the death. They’re interrupted by another fast-healing mutant, Lady Deathstrike. Deathstrike tells Logan that the originator of the bounty is Ogun, a ninja and one of Logan’s past mentors, who resides in Japan. Realizing that Wolvie has lost his healing abilities, Lady Deathstrike goes for the kill, until one of Wolverine’s closest friends arrives to save him: Kitty Pryde!

Thank goodness for Kitty Pryde in this story. For starters, we get to see Kitty Pryde’s abilities weaponized. In one of her most graphic battles yet, she severs Lady Deathstrike’s hand by becoming solid while phasing through it. As you may know, from the GUGcast, I’m a huge Kitty Pryde fan. It was great to see Kitty reunite with Wolverine to head back to Japan. It’s very reminiscent of X:Men: Kitty Pryde and Wolverine where they first travel to Japan to fight against Ogun.

While Logan and Kitty are in Japan, Kitty is temporarily possessed by Ogun. They fight and Kitty is able to shake him off. With Kitty weakened, Wolverine chooses to face Ogun alone. Logan finds that Ogun is not the originator of the bounty, but, in fact, Abraham Cornelius is. Dr. Cornelius, one of the senior scientists on the Weapon X program, was responsible for giving Logan his adamantium skeleton.

My dream date with Kitty.

[toggles behavior=”accordion”]
[toggle title=”Final-Issue-Spoilers”]Wolverine’s on his way to confront Cornelius. When he arrives at the lab, Logan finds the doctor experimenting on more people—putting adamantium inside their bodies. Most subjects have failed, and Cornelius, unaware of Logan’s current condition, needs Wolverine’s healing factor to help finalize these experiments. Wolverine chases the doctor after beating off his henchmen, but he’s distracted when he decides to save the test subjects. He breaks the container of heated adamantium, causing the hot metal to fall on top of him. In his last moments, he saves the test subjects and kills Cornelius. As the adamantium begins to harden, Logan looks back at some of his life’s highest points. He kneels down with his final thought: “enough.” The last panel of the miniseries shows his body encased in adamantium as the sun sets. It’s a very fitting way for Wolverine’s end. Who killed Wolverine? Technically, he killed himself, but he tried to save others who couldn’t protect themselves. Wolverine has been a lot of things in his past, a beast, a killer, a ninja, a principal; he definitely died a hero. 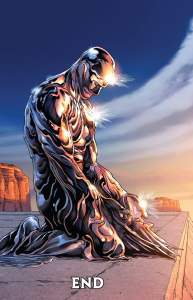 As we know, comic book deaths are rarely permanent. There’s no doubt that we’ll be seeing Wolverine again soon. According to a recent Marvel interview, there are no plans for Wolverine until 2016. Maybe we’ll see him sometime around the next X-Men film. Regardless, this was a great way for Logan’s current story to end. It gets me even more excited for his undoubted return.

Honestly, Death of Wolverine is very good for the X-Men franchise as a whole. Wolverine’s often been the character who saves the day. I’m looking forward to seeing the writers use other X-Men to their fullest potential, since they can no longer rely on Wolverine.

What did you think of Death of Wolverine? Did they give him a good send off? Anything you would change? When do you think we’ll see him again?

- Graphic violence may be too much for some readers - Worth every penny, the $4.99 price tag may still be steep

This is one of the best story arcs Marvel has produced in the past few years. The story and artwork alone are worth picking up these issues. The bonus features included in each issue add to the value of these books. Despite the graphic violence and steep price tag, Marvel delivers a great send-off to one of their most loved characters.