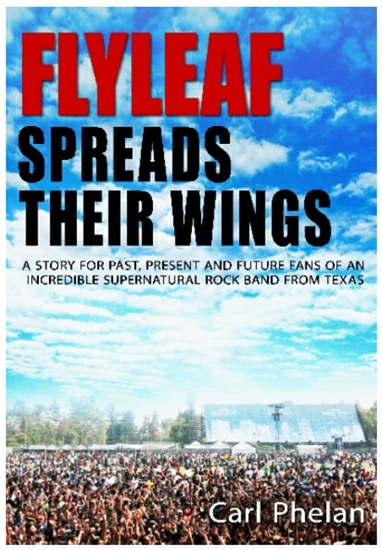 You may not see it directly, but what you listen to can affect your soul greatly. Satan can abide in music, but so can Jesus. Flyleaf has been promoting the Christian side of sound for over a decade. Carl Phelan’s book, Flyleaf Spreads Their Wings, is a beautiful, informational telling of the band’s history, stories of events in the members’ lives, and testimonies by the fans concerning how the Lord has used FlyLeaf to impact them  personally.

Flyleaf Spreads their Wings states clearly and simply how Flyleaf matured from the small-town, Temple/Belton Texas band named Passerby, to the world-wide mega-hit that has breathed the spirit of God into the homes of the hurt. Being a fan of the band for some time, I knew a lot about Flyleaf, but this book informed me far beyond even that. Carl Phelan should be applauded for gathering all the photos, information, and quotes that compose this 361-page love-letter to Flyleaf. Allow me to give you an example of some information unknown to me before reading this book:

Passerby had a break out year in 2003. They increased their fan base by playing in most parts of Texas. They had several gigs at The Vibe, Steamboat, 6 of Clubs, The Red-Eyed Fly, The Ale House and Spiros Amphitheater in Austin, Texas. They also played a few more times at The Door in Ft. Worth and Dallas, Texas. They played a couple of times at Bum’s in Temple, Texas. They also played at Venues in Belton, Cedar Park, Harker Heights, Tyler, Glen Rose, Weatherford, San Marcos, San Antonio,Galveston, Denton, Rockwall, Peaster, Waco, Garland, Odessa and Midland.

Thanks to the amazing compilation efforts of Lacey Sturm (amongst other band members) and Carl Phelan, the reader is not only informed about touring dates, but also about the amazing struggle the band went through and how they depended on God during it all. Many tidbits of information that wouldn’t come up on the standard Flyleaf informational webpage are present here, thanks to the personal input of the band itself.

Here is one of many quotes from the book that will no doubt be inspiring to any up-and-coming Christian band:

Red Sam was our first song.. I still felt like I was gonna puke… “Help me, help me, help, help, help… Oh, Jesus.. help me please.. Don’t let me puke.” The beginning riff happened and everything was building. I put my hands in my pockets and filled them with those tiny red stars. “here comes the hit…” I thought as soon as James smashed the cymbal I spun around and threw a handful of stars into the air above the kids who were all smashed together at the front of the stage. The second hit came and flung my arm across them again sending an arched streak of sparkling stars over them again.. this times their hands went up and they were reaching for them… “Oh, God bless them Lord, “ I prayed…“Especially the ones who struggle with wanting to be alive and not knowing who they are or why they are here. Pour out your love and grace and peace over them, Lord and let them know that you are close and here and that you care. Tell the devil to shut up, God.” Then I opened my mouth and sang the first line of the song.. “Here I stand, empty hands…” Right then peace fell over me and my nausea was gone. I knew in that moment for the first time that night, that I was not going throw up on the audience.

As previously stated, Lacey Sturm and some of the band’s other members helped with the information given in this book, so the reader isn’t consuming guess-work or Wikipedia copy-and-paste information. One minor complaint I have, however, is that the sentences seem overly simple and repetitive: They did this. Then they did this. Later they did that.

Flyleaf didn’t just happen. They struggled through attacks from Satan, but they weren’t alone. They had the Most Powerful player on their side, and He didn’t give up on them. Though Satan thought he could work his wretched ways against this band, God had bigger plans, and these are outlined in Flyleaf Spreads Their Wings.

In summary, while some may criticize the sentence structure of Flyleaf Spreads Their Wings, it is undeniably an amazing compilation of information that will be gobbled up by any Flyleaf fan who can get their hands on it. I considered myself a well-information fan of Flyleaf before reading this book, but after completing it, my knowledge was vastly multiplied. For fans of Flyleaf, this book is a worthy investment.

Geeks Under Grace would like to thank Carl Phelan for providing a review copy of this book.

+ Informative + Inspiring + Assisted by Lacey Sturm and other band members

Flyleaf Spreads Their Wings is a beautiful compilation of any knowledge a Flyleaf fan would desire.