Review: John Dies at the End

“Something coming back from the dead was almost always bad news. Movies taught me that. For every one Jesus you get a million zombies.” –David Wong

Say you stole the brains of famous authors. I won’t judge you; I’m sure you have your reasons. But if you had the brains of H.P. Lovecraft, Stephen King, comic book writer Grant Morrison, Douglas Adams, Jim Butcher, Brian Lee O’Malley (the guy that wrote the Scott Pilgrim comics), and Robert Rankin. If you tossed all those brains into a blender, mixed them up into a fluffy pink froth, then reanimated them like Frankenstein’s monster, you might end up with the brain of David Wong, the author of John Dies at the End (JDatE).

Horror-comedy is a tough genre hybrid to pull off. Usually if your story is too horrific, your reader won’t be laughing. And if it’s too funny, that tends to de-claw the horror elements of the story. One of the coolest things about David Wong’s novel is how committed he is to making it both funny and scary, and how well he succeeds in his effort.

The plot follows slacker friends John and Dave, who accidentally get exposed to this mysterious new drug called Soy Sauce. (Well, Dave gets accidentally exposed. John does it on purpose.) It allows them to see ghosts and monsters, and to realize that our universe might be on the brink of invasion by alien creatures from another reality. Have years of partying and playing video games prepared Dave and John to save the world?

JDatE was originally released as a web serial, and its lack of structure serves as a reminder of this. Then again, its unconventional nature is also part of its charm. It doesn’t feel like an ordinary adventure story. One chapter might find the characters facing off against extradimensional beings in Las Vegas, another might find them researching a dark god’s influence over people on an Internet chat room. And yet, it all kind of fits together by the end.

John and Dave are great characters. They are the kind of guys that walk into a warehouse and feel that the most sensible course of action is to break open every crate in case it holds something valuable like any self-respecting Legend of Zelda player. They also can be irresponsible, especially John, but there is something heroic about them too. Whenever I sit down to sacrifice the amount of hours I’m going to spend reading a book, I want to know that I’m going to enjoy the characters’ company. John and Dave are fun people to hang out with, and David Wong’s playful writing style will make you smile. 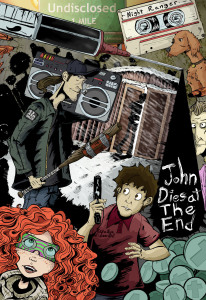 Content warnings: firmly in the “Rated-R” category. Expect violence, sex, drug use and language. Mostly language. There is a lot of swearing in the book. The sex tends to happen “off screen” but it’s it still should be mentioned.The violence is mostly fantastical, human-versus-monster stuff. It is a horror novel, so expect some scares and some gore. Reading this book while eating is not recommended. The comedy is also rather sophomoric at times. When you put the book down you might think, “Wow, that was surprisingly profound,” but you’re just as likely to think something along the lines of, “Wow, that was a lot of penis jokes.” I should also mention that the book has what might be considered occult content–think of the TV series Supernatural, but with more sci-fi elements.

One of the highlights of the book for me was its moral and philosophical explorations. In a world where science is starting to open up possibilities that are as scary as any offered by religion, how should human beings live? The novel opens with an old philosophical riddle (albeit told in a much funnier way than it’s usually posed in a philosophy class), one that doesn’t seem to make a lot of sense until you start getting closer to the end of the book. Lots of sci-fi storytelling deals with the question of what it means to be human, but John Dies at the End deals with the question in a way that is as entertaining as it is profound. One of my favorite scenes was when the old reporter, a man that used to be a soldier, described his feelings about modern first person shooter video games. The scene is chilling and while it probably won’t keep you from buying the next Call of Duty or Grand Theft Auto game, it will certainly make you consider just what the experience found in those games might be doing to you.

There are some Christian references in the story. For example, at one point the main character is kidnapped by a person possessed by an entity calling itself, well, not “Legion” exactly, but a modern equivalent. The book suggests the existence of an “awful secret” behind reality. Meanwhile, Christians often talk of a “fallen world.” John Dies at the End sheds some light on a fallen universe (Multiverse?)  I won’t say it displays a Christian worldview, because it doesn’t. His world isn’t quite as depressing as H.P. Lovecraft’s atheist vision, but there’s little evidence of a sovereign God in it. You can read David Wong’s articles on Cracked.com (where he serves as Executive Editor) for more insight into his particular views. Like the best comedians, he’s actually pretty insightful, and a lot of that insight is vested in this novel.

John Dies at the End is endlessly inventive.There are enough cool ideas in this book to fill several novels. (In fact there is a film adaptation of the book, and it covers less than half of the story.) It’s a funny book, one that more than once made me laugh out loud while reading it. It’s also genuinely frightening, and not because of the creepy monsters that crawl through its pages. Sure it has those, and they are scary and gross and everything you could want out of monsters in a horror novel, but it also offers a more existential kind of horror, one that can leave you deeply unsettled. If you’re looking for a good scary book to read this Halloween, I’d highly recommend it. It’s a fun book for geeks and gamers. So if my content warnings haven’t scared you off, put on your Scooby glasses and step through the ghost door, because what awaits you on the other side is a fun adventure story that isn’t quite like anything else out there.

If you can stomach the R-for-violence-and-language rating, this might be the most fun you have reading all year.