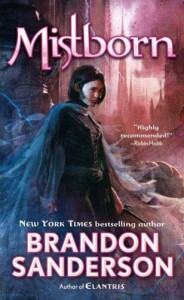 In a tyrannical world where the Lord Ruler has strict control over everything, including breeding, a team of thieves plots a rebellion. This seems an impossible task by the overwhelming history of failed attacks and overbearing power of the Lord Ruler. Nevertheless, Kelsier stands with his team of miscreants to defy the odds.

The world is wrought with chaos, where killing of innocents and skaa–commoners forced into slavery–are commonplace. Countrysides that were rumored to have been covered in beautiful green fields are now ashen wastelands. Nights that were filled with starry skies are now plagued with an ever-present mist that haunts the world’s inhabitants. Only nobility are afforded the luxury of nice palaces with clean floors, tirelessly cleaned at skaa’s expense.

The main protagonist, Vin, is a street urchin that is used to a life of misery and distrust. She has always been taught by her older brother not to trust anyone. As time goes on, her perspective of the world changes. She gets caught up in Kelsier’s scheme and plays a pivotal role in his plans of rebellion. While things continually go wrong, and cause plans to change, a twist at the end of the journey shows the leader’s true plans from the beginning.

While relatively light in possibly offensive content for Christians in comparison to other fantasy titles, this book does have some things that might cause you to decide against buying it.

As with most fantasy books, there is use of magic (though if this is something that turns you off from books, you likely wouldn’t be reading this review). The action in this book is done pretty tastefully, so unless that in and of itself will turn you off, you shouldn’t have any problems with those portions of this book.

Now for the things that might have turned me off from the book: Any time children are harmed or used to amplify the intensity of the moment, I will be sure to warn about. There are multitudes of other ways to get the desired effect without harming children in your stories. This title has some of this. While the details are left out, there are definitely parts I was not fond of. There is a pretty direct allusion to women and children being publicly beheaded, and a mother murdering her own child and rocking in a chair with the deceased child.

There are a few other scenes that depict gruesome scenes of people that the antagonists tortured and murdered as well. If you are able to look past these thing, this is actually a good book. These are things that are worth considering before you decide to purchase Mistborn, though. 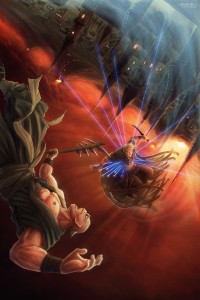 The character development in this book is done really well. Brandon Sanderson does a great job of painting the scene for you, and he gives a good amount of detail for the characters, too. You sympathize with a lot of the characters and the support roles aren’t two-dimensional. A lot of pieces are presented that don’t reveal how they fit together throughout the book, but they tie together at the end very well. This book is anything but predictable.

It does take a good majority of the book for the author to lay out the team’s plans to overthrow the Final Empire. I stopped reading the book for a long time because I got tired of reading dialogue that led to the action at the end. I would have liked to see more of Kelsier’s missions that stirred up the nobility. While this book was a good read, it was a little slow for me.

If you would like to purchase Mistborn from Amazon, you can use the link below: