Review: Shadows of Self

The adventures of Wax, Wayne, and Marasi continue in this almost-noir style adventure. Set in the same period of time as its predecessor, The Alloy of Law, Brandon Sanderson moves the clock forward three hundred years into the future from the events of the original Mistborn trilogy. We are now in a world where Vin, Elend, Sazed, and the rest of the crew are now legends and members of religion, faith, and history. This second book in the Wax and Wayne era takes on a more detective style feel where our characters are trying to investigate the crimes of an assassin during a tumultuous time in the city of Elendel. Let’s find out how well Sanderson pulls off a different style of adventure in Shadows of Self.

Violence: Similar to The Alloy of Law, Shadows of Self is full of violence. It is not overly grotesque, but people are kicked, punched, shot, stabbed, and beaten. There is blood and people do die, both innocent and guilty. The violence occurs from the very beginning to the very end of the book.

Sexual Content: Slightly more sexual than I’m used to from Sanderson, but once again, clean by comparison to many other fantasy writers out there. Wayne’s humor is often crude. One character in particular is very sexual and Sanderson calls that out. Her body is described in great detail, which is for a purpose. She is never described as nude, but it was more detailed than expected.

Drug/Alcohol Use: Minor content, but characters do drink and smoke. Wayne drinks a fair amount, but is able to heal himself from the effects of alcohol.

Spiritual Content: Shadows of Self expands on the very religious world Sanderson has built. The religion that was built in the Wax and Wayne era is essentially the backbone of the story. Harmony (the god of the story) is directly involved in the story and characters ask many questions about Harmony’s purposes and plans for this world. Shadows of Self tackles many questions of faith and religion throughout the story.

Language/Crude Humor: All I can say here is… Wayne… His crude nature is a part of his being. He makes numerous jokes about love, romance, and sex. Sanderson somehow keeps it as clean as that can possibly sound. While Wayne’s jokes are crude, his words are not overly descriptive, and there is nothing in Shadows of Self that one wouldn’t see in a PG-13 movie. Some minor language, such as d***, a***, and h***.

Other Negative Content: Society doesn’t change much in Sanderson’s worlds. There are still nobles who look down on the commoner. We see this boil up to the top in this particular story of what happens when common people are driven too hard by the nobility. The commoners may no longer be slaves, but wealth disparity is still alive and well.

Positive themes: Sanderson books are always filled with heroic characters who will make sacrifices for the greater good. One thing I found interesting in this book was Sanderson tackling issues such as worker rights and labor standards, addressing some very interesting issues that are still relevant today.

Ah… here we go again. Another Brandon Sanderson book ready to be reviewed! I’ll be honest, everyone, I cannot get enough of his books and if you saw my overall rating and read any of my previous reviews of Sanderson’s books, then you already know that I have nothing but positive opinions about his stories. Shadows of Self did not disappoint me. It took everything from the first book and added more on top of it with a nice little Sherlock Holmes flavor to make the book that much more enjoyable. If you have already read The Alloy of Law and the original trilogy, then you are quite familiar with the lore and magic system of the Mistborn universe, so I’ll withhold recapping his extensive magic system in this review. 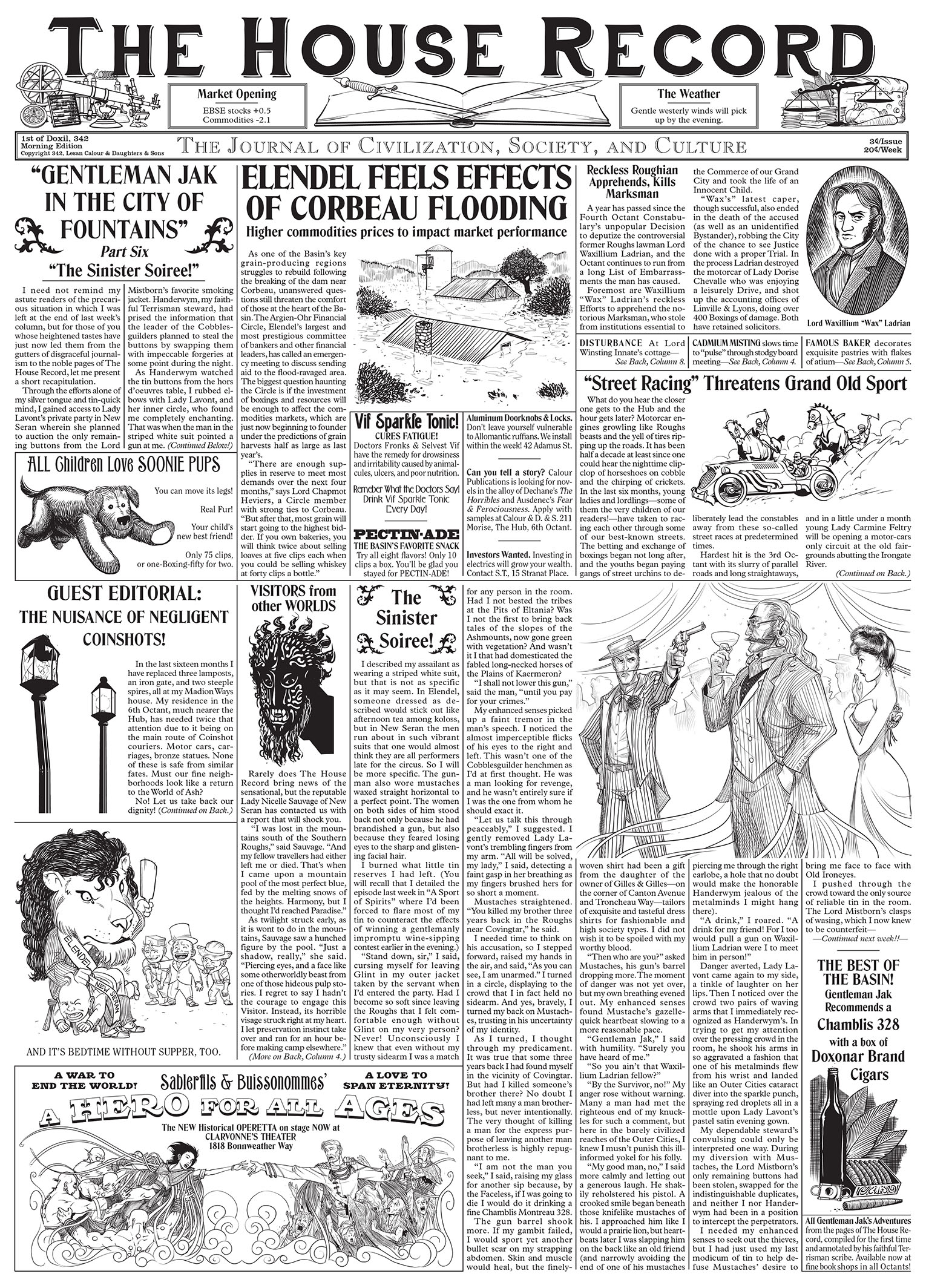 The reader gets treated to the news around Elendel!

Life in Elendel is changing, society is changing, technology is changing, and it’s messing with the beautiful-but-deeply-flawed city that we all know and love. Civil strife, murder, and assassinations are disrupting this once utopia-like city and Wax and Wayne, along with their companion, Marasi, are investigating. The story flows like a Sherlock Holmes’ novel, with our characters searching for a murderer; throughout most of the narrative, the team feels like they are one step behind at all times. Wax and Wayne use their powers as Twinborns in really impressive ways, particularly in this more modern society. For example, making a bullet cause a greater impact if Wax steel pushes it… very creative, Mr. Sanderson, well done!

On that note, one thing I really enjoyed in this book was the thought-provoking concept of, “In a world of more modern technology, where do allomancers fit in?” It is an interesting question that Sanderson teases, but proves that society is not there yet, as it still depends on the sharp mind of Wax and shaper wit of Wayne.

Overall, I thought the characters were fleshed out to a much greater extent in this book. Sanderson really chose to develop Wax, and the rest of the cast, in really fascinating ways. Using various forms of flashbacks, paragraphs dedicated to a single character, and diving into those characters through entertaining dialogue. Throughout the novel, the reader gets to see the hardship that shaped Wax and how he had to make the choice to reject not just the culture of nobility, but also his Terris heritage as well. The reader will also see that Wayne is more than jokes, as the narrative fleshes out what eats away at him and the guilt he carries. I won’t say anymore, but I really felt like I got to know these characters in this book, whereas they felt more surface level in the first book.

Religion takes on a much heavier tone in this book. Sanderson created a religion for the Wax and Wayne era, based off the events of the original Misborn trilogy. In The Alloy of Law, religion was a cornerstone of society, but there were only hints and whispers of how important it would be to the narrative. In Shadows of Self, it comes to the forefront of the story. The god of Sanderson’s Mistborn universe uses his agents and interacts directly to help our protagonists throughout the narrative. Religion is really where this newer Mistborn series harkens back to the original series with some very enjoyable cameo appearances from the characters of the days of Vin and Elend. I had a lot of fun when Sanderson interjected these characters from the original series and I think any fan will feel the same.

As for the writing overall, it is fantastic. As with the previous book, Shadows of Self takes on a much more action-packed and fast-paced tone. The action is impressive as always and put me on the edge of my seat, but it was not all fighting. It was also the race against time that added to the faster pace. Who is the murderer? Who is their next target? Who can help us? These are constant questions for our protagonists and Sanderson keeps the reader guessing. Let me be clear though, the fight scenes are still brilliant and no one does them as well as Sanderson.

As with the first book, Sanderson does a masterful job of creating fun action, and even does a great job of fleshing out our characters with less pages to work with, but we still know far less about the world than we did at this point in the original series. This will be perfectly fine for some readers, such as myself, but some will want more world building.

Shadows of Self raises an unreal number of spiritual and faith-based topics. We see the god in this book directly intervening in his world, we see different ways to worship that god, and those different groups do not always agree with each other. It tackles issues that we see even now, creating great conversational topics with non-Christians about who God is and the role of the different denominations in the Church. The biggest thing this book tackles is the limits of a god’s power and how a god operates under constraints. It was a great reminder to me that our God is not limited nor has constraints, but is omnipotent, omniscient, and omnipresent. This is another great opportunity to discuss why our God is all-powerful to a geek community that has likely read this book and is asking these questions.

Shadows of Self is a fantastic book and Sanderson does a great job of adding new spins and flavor. I think any reader who enjoyed his earlier Mistborn books will, without a doubt, enjoy this one. The real question is… Are you already on the way to the store or library to pick-up the next book in the series, The Bands of Mourning?

Shadows of Self is a strong sequel to the first book in the Wax and Wayne era. Despite some weaker character development than what most readers are probably used to with Sanderson, Shadows of Self does a great job of balancing fast paced action and fleshing out interesting characters.