Review: She Could Fly

“She could fly. I saw it. With my own eyes” (1). In She Could Fly, the first collected volume of the Dark Horse horror comics, teenage Luna Brewster is locked in an inner world of violence and self-loathing…until she sees the flying woman. This unknown lady in the clouds opens all kinds of hopes and dreams for the girl. When she watches the woman explode on television, Luna dives into the mystery surrounding her flight and death. She becomes engrossed in a conspiracy of huge proportions, fighting factions of company security, national governments, and her own destructive thoughts.

Violence/Scary Images: She Could Fly is an extremely graphic volume of comics. The main character suffers from an undiagnosed mental health disorder. Her inner world is full of blood, death, and destruction. Although none of these things are reality, the illustrator does not shy away from plunging the reader right into Luna’s head. The real world of this book is not innocent, either, as various groups fight each other relentlessly. Readers should expect to see severed heads, exploded bodies, grotesque transformations, and a myriad of other gore before reaching the end.

Drug/Alcohol References: Adult characters casually drink beer, but are not depicted drunk. Two adults meet in a bar which advertises “BEER, WINE, BOOZE” on a sign outside.

Sexual Content: One adult secondary character is a prostitute. Her opening scene is a job with another character. They are obviously having intercourse, but readers see nudity from the back and side. Private body parts remain unseen. Various characters mention the prostitute’s job throughout the volume, but they do not explore it in detail. In a fit of confession, Luna describes thoughts of raping her sickly neighbor and having intercourse with the dead. 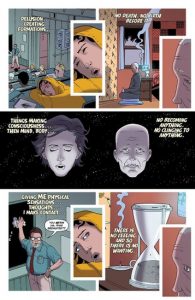 Other Negative Content: A voice in Luna’s head is constantly convincing her she is going to hurt other people. Because of this, she attempts an interrupted suicide. A secondary character plans to become a traitor to his country for money.

Spiritual Content: Luna’s grandmother returns from Japan as a spiritualist. Her ideas are along the lines of Buddhist thought about the absence of self and oneness with the universe. Luna’s mother is in a Christian mysticism group which discusses their personal experiences with Christ, usually involving ghosts or other supernatural phenomena. This group pushes Luna’s unstable mind into becoming a demon as their opposition.

Positive Content: Luna never wants to hurt her family, going so far as wanting herself gone to protect them. While her parents are clueless about the extent of her symptoms, they genuinely love their daughter and want to help. Luna’s guidance counselor goes to extreme lengths to mentor her and set her back on a healthy path. 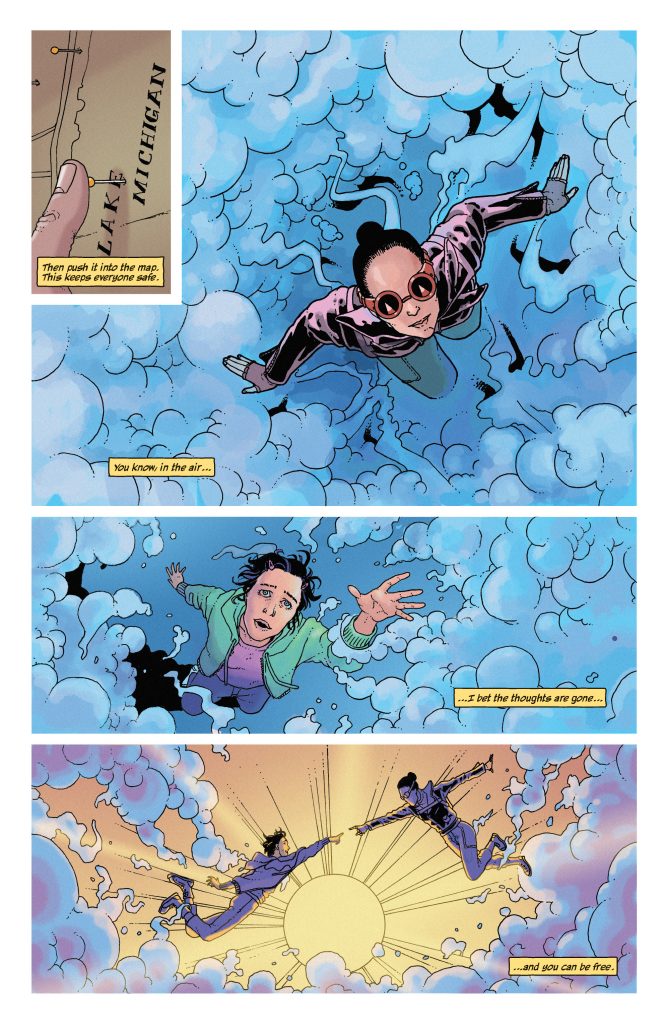 She Could Fly is a break from the norm of superpower literature. Young Luna is an observer, not a superhero or even the friend of one. She knows nothing about this flying woman and could even be described as a stalking fangirl. When an accident leaves the woman dead, Luna decides she must find out everything she can about this lady, no matter the consequences. She teams up with a physicist and his girlfriend to track the flying device and the woman’s family. As the seemingly harmless venture continues, she learns powerful people are after the device, and she will have to choose between her obsession with flight and the lives of her family.

A Look at Mental Illness

If a reader has ever wanted to experience the inner mindset of someone with severe mental illness, She Could Fly is a must-read. Author Christopher Cantwell has admitted Luna’s struggle is a battle he fought himself since he was a child (here is a link to the interview if you want more information, but be aware, there is some language). He and the illustrators do not hesitate to give readers a look inside Luna’s head. This glance is terrifying, dark, and humbling. 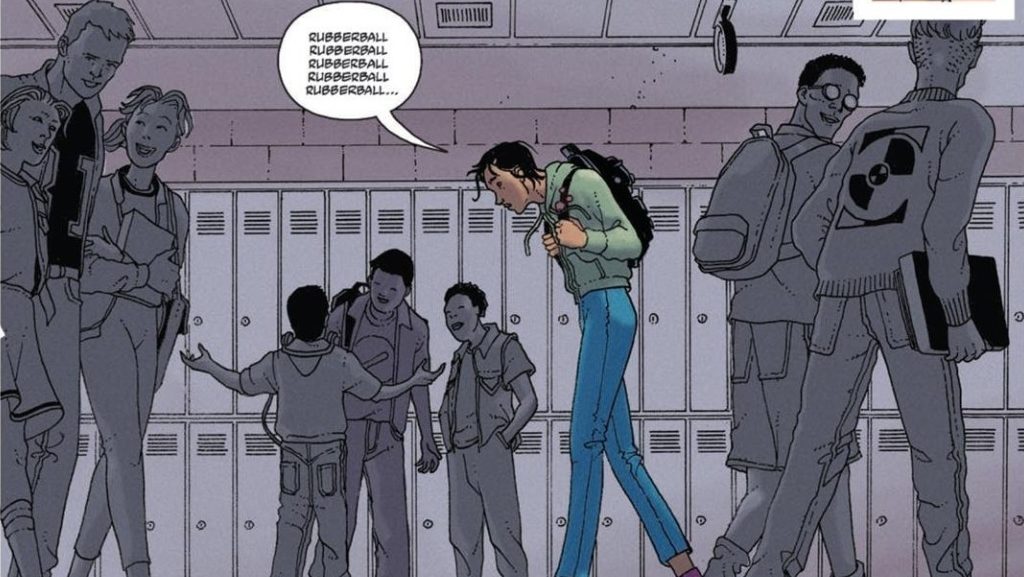 The back of the book describes the main character as a “disturbed 15-year old girl,” but this reader was not prepared for everything that entailed. Luna Brewster suffers from a terrifying mental illness which goes unnamed in the book, but Cantwell explains is Pure O, a form of Obsessive Compulsive Disorder (OCD). The girl imagines horrifying things happening to her parents and others, usually from something violent she did unwillingly. These images and the self-loathing accompanying them haunt her without end. That haunting crosses the fourth wall and reaches its arms into the reader’s heart and mind.

Comics: Not Just for Kids

Comic books were once considered childish, but they are the perfect medium for stories of this magnitude and complexity. Readers watch innocent moments turn into horror movies as Luna’s illness takes over her brain. There are no segues from fantasy to reality, and readers are thrown from a simple conversation into a gory vision and back again.

One of the most poignant examples occurs early in the book. Luna’s mother buys her a cactus. Luna eyes it for a moment and shoves it into her mouth, pricking through her skin. She then turns and plucks out her mother’s eyes while her father screams silently in the background. A second later, the cactus is still in her hand, and she thrusts it back to her mother, fleeing the room.

The picture below shows what happens when the guidance counselor asks if Luna is excited to start driving. She envisions a bloody scene of running over someone and the police locking her away as a monster. 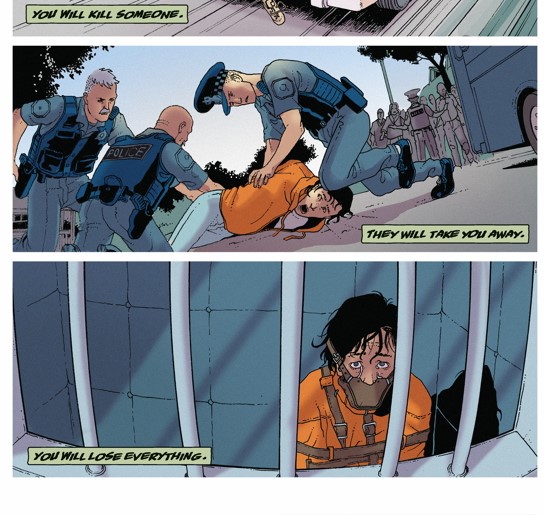 The book’s first jump into Luna’s head is terrifying, to say the least.

This graphic novel is an important one for understanding and discussing mental health, but it is very dark. Aside from the (sometimes unnecessary) gratuitous violence, its characters are flawed human beings with few redeeming qualities. Luna refuses to talk about her condition to anyone, instead fixating on the woman who could fly. The counselor knows this is unhealthy, yet she herself goes to extreme lengths to protect Luna. Readers later learn the counselor has her own mental struggles and sees herself in her young patient.

The Brewsters try to be good parents, but “her father and I respect her privacy” and never ask about things they know she is hiding from them (86). This mistake is nearly fatal when Luna’s obsession spills into their home. Gramma is a wealth of Buddhist wisdom, helping Luna lose herself to find her identity. However, the elderly woman has hallucinations and confusions of her own, so the reader is never sure how much to trust her.

She Could Fly is a hard book to read. Its bloodbath continues outside Luna’s brain. A fight over flying leads to a gory massacre, which could have been avoided if the parties involved had not been so caught up in their own interests. The characters are raw, unfiltered, and in desperate need of Jesus.

As human beings, and even more as Christians, we need to understand the struggle of people with mental illness, but this particular book is a rough place to dwell. Luna’s thoughts are gruesome and may trigger readers who are fighting their own battles. While the ending has a message of hope, it does not excuse the reality of carnage left in the wake of needlessly selfish characters. This reader describes it as a must-read she will never forget, but never read again.

- Some unnecessary gore (especially the parts set in reality) - Characters have few redeeming qualities - End of the story is somewhat hopeful, but remains ambiguous

She Could Fly is a dark graphic novel which blends reality and fantasy to pull the reader into the grotesque inner world of a girl with mental illness. Its characters overflow with personal flaws, but it is an eye-opening look at a life most readers never experience, but should be able to recognize.