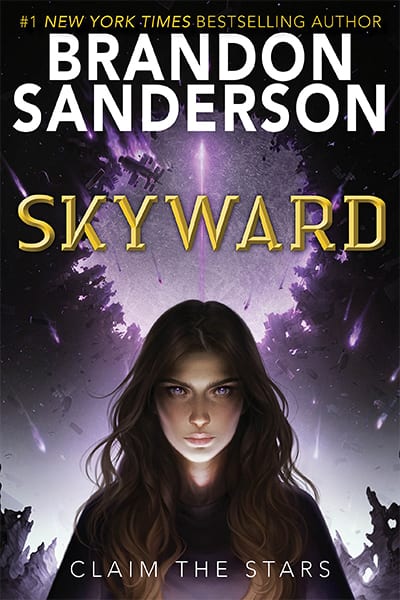 I think many of us dream of soaring among the clouds, and if you are a sci-fi geek like me, you dream of soaring among the stars. Skyward by Brandon Sanderson is the first book in the Skyward series that follows a girl named Spensa who has that same dream of flying among the stars, just as her father did before her. Spensa is unfortunately labeled as the daughter of a coward, making her longing of space flight a distant dream. However, the young woman will not allow that dream to be snuffed out easily.

Violence: Skyward contains a moderate amount of violence. There is quite a bit of ship-to-ship combat, and many characters, even notable ones, die in those encounters. However, the depictions of death are not gruesome.

Sexual Content: Almost none. There is some mild flirting, but nothing more.

Spiritual Content: Very little. One character is clearly religious, but her specific religion remains unclear. Society overall appears to be secular, but the first citizens who arrived on the planet engaged in idol worship.

Language/crude humor: Some minor swearing, such as d*** and h***. Spensa also tends to use swear words like “scud,” which is unique to the world of Skyward, and extreme phrases, like “I will bathe in the blood of my enemies,” to cause listeners shock.

Other Negative Content: The community in which Spensa lives is unforgiving and doesn’t treat its citizens fairly. Spensa’s father is branded as a coward, and his family must pay for that crime by being publicly ostracized. Additionally, anyone related to a famous pilot is given special privileges, which disadvantages others.

Positive themes: Skyward is full of acts of courage, sacrifice, and overcoming tremendous odds. Characters change their opinions and shake off preconceived notions about others. Spensa also begins to slowly forgive the unfair society around her.

Skyward was always on my list of Sanderson books to read because you know… I really like all things written by Brandon Sanderson. Although, I admit that it was not high on that list, largely because it is not part of Sanderson’s Cosmere universe and is labeled as young adult (YA). As I’ve said in my other reviews, I enjoy YA, but it’s not my go-to genre. However, I was in a rare YA mood and enjoyed Sanderson’s The Reckoners, leading me to give this one a shot. While it isn’t perfect, Skyward is a solid start to what could be Sanderson’s strongest young adult series.

The book follows the story of Spensa, a teenage girl branded the daughter of a coward. She lives on the planet Detritus. Here, citizens have been forced into caves from recurring attacks by an alien force called the Krell. However, after decades of living on this planet, the people have adapted and retrofitted technology from its former occupants, creating starfighters. These fighters’ pilots retaliate admirably and become legends in the society. Spensa’s father was a famous pilot who ran from battle, forever labeling Spensa as the daughter of a coward, but she does not let this get her down. On the contrary, she has every intention of defying the odds and joining flight school, becoming a pilot despite everyone rooting against her.

I found this element of the story really compelling. The reader feels for Spensa as she struggles to fight the forces working against her. The teen is definitely headstrong and ambitious, but throughout the narrative, we see her confidence get shaken. She is a realistic character with challenging obstacles to overcome and, subsequently, feels very human.

Despite the troubles, Spensa is not without allies and friends. She is surrounded by a variety of characters, particularly those in her flight school class. The group was fun to follow, and they all came together organically. The students do not start as best friends, and they have personal reasons for not trusting each other. However, the classmates overcome this distrust and grow closer artfully. Well done, Mr. Sanderson.

The primary antagonist is a believable villain, but here is the best part. Spensa’s main enemy is not the invading alien force but the leader of the Defiance Defense Force (the military government of humans on Detritus), who once flew with Spensa’s father. She isn’t evil, but she does everything she can to prevent the girl from walking in her father’s footsteps.

My only character complaint is that Spensa sometimes tries to overcompensate for her low status in society. She says really audacious statements, such as “I will destroy my enemies and dance upon their grave,” just to get reactions out of people. Spensa also uses childish language, like calling one classmate “jerkface.” That is more of a nickpick, but it caused me an eye-roll or two. The narrative would be moving along, and one of these statements would appear, pulling me out of the story.

My absolute favorite character in Skyward is not human. His name is M-bot, a sentient robot of a broken-down spaceship that Spensa discovers in the caves of Detritus. This spaceship is not of any design the DDF has in its fleet. Spensa spends much of the book fixing this starcraft with the help of one of her only friends in the colony. During this, they must bear the constant badgering of M-bot, who is absolutely hilarious and had me laughing out loud in his efforts to understand human nature. The robot is also more important than just comedic relief; his ship is a part of a larger mystery that unfolds as the reader works through Skyward.

Moving on to the action in the book. I felt like the space combat was one of the best parts in the story. This came as no surprise; Sanderson can write strong action sequences. The space battles were never too long or too short, including just enough action, tension, and suspense to keep the reader flying through the pages.

Now, my main complaint for the book is this, the world-building fell a little short. This surprised me because Sanderson is generally a very strong world-builder, arguably among the best in fantasy/sci-fi literature. My guess is that he chose to make a more simplistic story to appeal to the YA book market. Despite this reasoning, the setting could have been more fleshed out. There were numerous opportunities to make Detritus more interesting, especially since it is clear there are other colonies with different identities and cultures. I understand not every story needs massive world-building, but the setting was more shallow than I’m used to from Sanderson. Therefore, I did not care as much for the planet or anything outside Spensa, M-bot, and her classmates. I will concede that this is going to be a multi-book series, and Sanderson may have decided to flesh out the world in a different book.

Skyward presents some really powerful themes for Christians. One common idea throughout the narrative is longing. Spensa longs for friends, for her father’s redemption, for acceptance, and for the chance to fly among the stars. We see her constant struggle to grab and hold on to whatever she can despite the odds. As Christians, we have that same longing for something greater. We crave fellowship with other believers and, more importantly, an intimate relationship with our God. Skyward was a reminder to me, particularly in these times of social distancing and quarantine, that we need to pursue time with God and with other believers in Christ. It may come in the form of Zoom calls, Roll20 sessions with D&D buddies, or game nights with family; but that longing for connection with others is invaluable. Most importantly, just like Spensa’s need for the stars, we should make sure we satisfy our need for God in our daily walk with him.

Overall, Skyward was a solid first entry. It had some really fun characters and incredible action sequences, although it was a tad shallow on the world-building. I’ll be looking forward to reading the second book in the series, Starsight, and continuing Spensa’s journey to understand the stars above her.

Skyward is a solid start to Brandon Sanderson's new YA series. It features a great cast a characters with some epic and tense ship-to-ship combat. If the reader can look past some silly dialogue and weaker world-building, they will be in for a fun read.