With all the Sonic comics floating around, from spin-offs to TV Show adaptions, how can one keep up with the what’s-what of Sonic Comics? Well, ever since 2012, Sonic Super Digest has been an affordable and available alternative to selling all your precious possessions and buying every Sonic Comic released. Interested? Then check out a Geeks Under Grace look at the 10th issue of Sonic Super Digest. 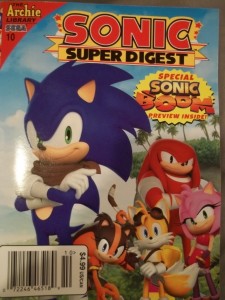 There are a few references to spirits as well as shrines. Also cleavage is revealed by multiple characters and an advertisement.

This digest consists of many different plots from many different comics, including the new Sonic Boom. Some plots dive deep into their story, and that sees Sonic and co. in foreign areas (such as “Meropis”, an underwater city) and even in classic places (such as Oil Ocean from Sonic the Hedgehog 2). Plot elements are even borrowed from past Sonic Games, such as Sonic Adventure 2 and Sonic Heroes. You’ll find lots of characters from the SatAM television series, like Bunnie Rabbot and Rotor the Walrus, as well as the Sonic Boom cast, with newcomer Sticks the Badger. I do wish that Dr. Robotnik was present more often, as he only appears in the Sonic Boom story.  I found the environments and character interaction very interesting, and there was even a tad of genuine comedy within the book. I did find that characters in the new environments seemed pretty cheap. Take a creature of some sort (in this case, fish and sharks), shape it like a human, give it a one-note personality and have it interact with Sonic and his friends. But then you have those quality new characters that have a funny and/or interesting personality, such as Sticks the Badger with her paranoia, which extends to a point that she reacts fearfully to a logo bearing her own name- ha!

But with much positive comes a bit of negative. Almost every story is heavily reference dependent. And it’s not explaining. It’s telling you to go check out some other comic or Game to get the necessary information. As I own nearly every Sonic Game, I was able to pick up on certain plot elements, such as the Charmy Bee having experienced ghosts before, which took place in the 2003 Game Sonic Heroes. Thankfully, the stories aren’t as dependent as they were in the last issue, and the Sonic Boom story is completely self-contained. I do wish there were more stories based on the show, as there is only one here. Lastly, there are, just like in last quarter’s issue, no classic comics. I do dearly hope that this does not become a normal thing, as the classic comics are a big part of why I purchase these digests.

The penciling here is fantastic. Sonic is just as memorable as he was back in the day. Characters never really seem to have off proportions and their body language demonstrates the emotion presented, like when Sonic sarcastically states “Oh, dear! I have been thrown with excessive force!“, His face shows his sarcasm as well as his dislike toward the situation with one hilarious look just before he slams through the Oil Ocean Refinery. Another notable example is when Sonic the Hedgehog is transitioning into Sonic the Werehog. The art amazingly depicts the ‘hog at a strange and scary-looking in-between point as he transforms from a tall and lean Hedgehog to a shorter, thicker, and furrier Werehog. You will definitely be satisfied with the amazing works of art here.

Issue #10 of Sonic Super Digest is a huge improvement over the previous issue #9 (a review of which can be viewed here) in the sense that it is less dependent upon references and in the sense that it contains stories that are much more interesting well-thought-out. While the occasional cheap characters and the revealing of cleavage are present and even combined, the digest over-all is a quality piece that is worth the buy.

- Some Cleavage Revealed - Some Cheap Characters

While it is not perfect, Sonic Super Digest Issue #10 is a much better issue than the previously released #9 and contains interesting stories and amazing artwork.