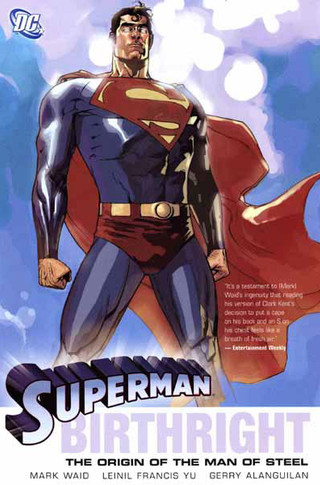 Clark Kent crashes on earth as a baby from the planet Krypton, after his biological parents sacrificially sent him to earth once Krypton was destroyed. He is adopted and raised by Jonathan and Martha Kent. Clark realizes the gift of his powers and decides to become Superman, protecting the citizens of Metropolis from Lex Luthor and numerous other villains. Clark holds a job as a journalist at a newspaper company called the Daily Planet. He works alongside his regular love interest, Lois Lane, and when he catches wind of something going wrong in the city, he jumps into his cape and costume and flies off to protect “Truth, Justice, and the American Way.”

DC Comics brings in Eisner Award-winning author Mark Waid for Superman: Birthright. Waid is known for his work on the Flash, Kingdom Come, Captain America, Fantastic Four, and Daredevil. Leinil Francis Yu is most well-known for his work on Wolverine from 1997 to 1999 and the X-men. He was also known for being a conceptual artist on the 2005 film Serenity.

Violence: We have standard comic book action, such as punching, kicking, fighting, and minor blood from this violence. There is a rather disturbing dissection scene where Lex Luthor is showing Clark and Lois a holographic display of his plans to dissect Superman. The autopsy of the body shows entrails and a severed skull, showing the brain. Weapons and guns are frequently used to attack innocent civilians who either end up dying from their wounds or suffer momentarily from bloody bullet wounds.

Drug/Alcohol Use: Very little, occasional drinking by some characters.

Language/Crude Humor: There is some swearing; God’s name is taken occasionally in vain, and D*** and H*** are used.

Other Negative Content: While Superman stands for truth and justice, he still acts outside the bounds of the law, hence giving him the title of vigilante. He is respected by the police force, but he still walks a fine line between protecting the innocent and breaking the law.

Positive Content: Superman truly cares about the people around him and seeks truth and justice for those in need. Superman is guided by his small town values and the morals and beliefs instilled in him by his parents, Jonathan and Martha Kent.

Superman really is the idyllic superhero; he very much sees the world in black and white like no one else. Unlike his very popular counterpart in Gotham who exists in a sea of gray, Superman has no intention to bludgeon a character to “near” death and stalk through night. He would rather be a visible symbol of light and hope. Villains do not need to look over their shoulders or around corners for Superman; they know the most powerful superhero is coming right at them in broad daylight.

Superman: Birthright is a Superman origin story, but rather than focus on when he first discovers his powers, the story begins when Clark decides he needs to do more with his powers. The world is a dangerous place, with so many vulnerable people in it.  Clark quickly decides that it would be a waste to not help those in need. 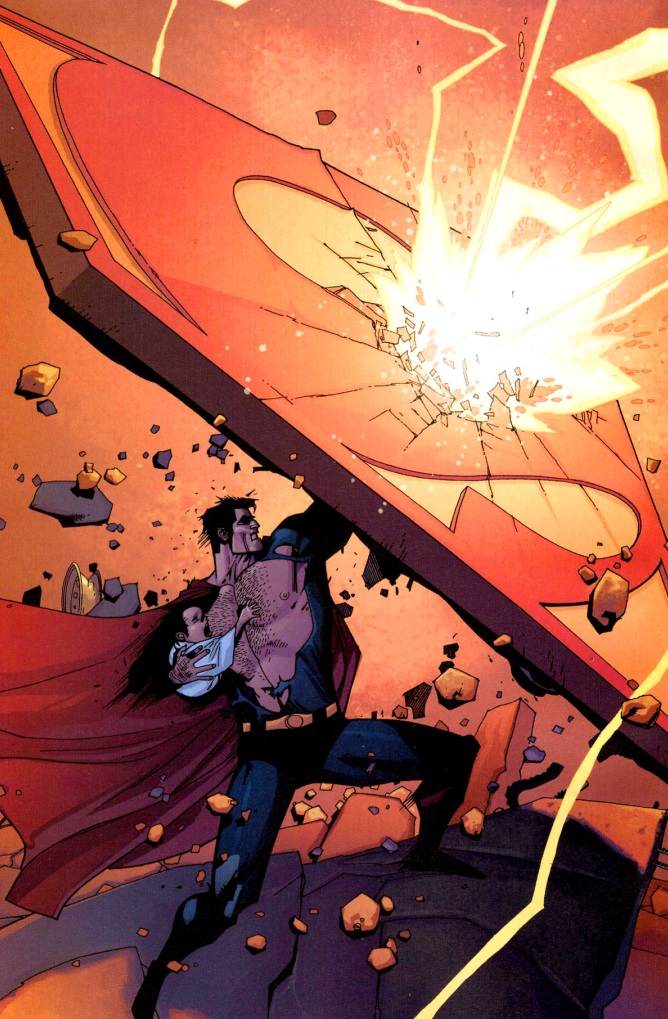 The beginning of Birthright kicks off with Clark doing some photo journalism in Africa. While he is there, he unexpectedly gets embroiled in a social conflict between two tribes, and attempts to help the people and find a peaceful resolution. As you might expect, the situation spirals into chaos and Clark tries to help the innocent people caught up in the conflict, while trying to be discreet about his powers. He realizes being discreet isn’t feasible and decides to find a new way to help others, use his powers, and hide his identity all at the same time.

His black and white approach to solving crime comes from his upbringing under Jonathan and Martha Kent in the small town of… Smallville. He is also propelled by a thirst to find answers to two specific questions: Where did I come from and why was I sent here? Birthright is all about Superman seeking answers to these questions and putting on the “S” uniform for the first time.

One of the most enjoyable scenes in the book was when Clark and his mother, Martha, are trying to create Clark’s secret identity. Superman, in pop culture, is often the butt of jokes when it comes to his “disguise.” Just toss on a simple pair of glasses… and KAPOW… new person! Well, Birthright actually makes a serious, and very believable, attempt to explain just how his disguise is far more elaborate than a simple pair of glasses. In order to hide that Clark is Superman, Martha tells Clark to put on baggier clothes, wear glasses that mask his eye color, adjust his hair, and slouch more. This changes Clark from a young and confident man, to someone less interesting and able to blend in with the crowd.

From here, Clark is off to Metropolis for his first job and to meet some of the most important characters in Superman lore. He will meet future love interest Lois Lane and his greatest foe and oldest friend, Lex Luthor. Mark Waid truly does a fantastic job of weaving these different characters and story lines together to create a complete and cohesive plotline. Waid stays focused on a single narrative throughout, telling the story of Superman’s early days without jumping down any rabbit trails, bringing in enough information for the reader to quickly understand the various characters. Even so, you never get lost in any one character other than Superman.

The artwork is superb! You really see the characters for who they represent, even down to the character’s posture. Clark is often depicted standing very tall, chest out, and shown as confident… except when he is at work, where he tries to pass off as someone boring. In those instances, he slouches more, puts his hands in his pockets, and remains in the background. Lex is often depicted in a menacing manner, appearing as if he is looking down at you, and Lois is very much characterized as a strong and hard-working woman with plenty of confidence.

The action scenes are some of the most powerful I’ve ever seen. Leinil Francis Yu and the rest of the creative team really bring in some moments that are truly breathtaking. The hair on my arm stood up on several occasions as I was reading! My only critique would be that some of the facial expressions, on rare occasions, didn’t quite match the context of the scene.

The few glimpses of Superman’s life as a teenager are usually his memories connected to Lex and they highlight the stark differences in their upbringing. Clark was raised in a warm home with a loving family, where he learned that money isn’t everything and family is important.  While Lex was raised with all the money in the world, but the lack of love in the home left him wanting and seeking so much more, leaving his motivations twisted and warped by his pessimistic worldview of humanity.

In many ways, Superman: Birthright is a story about two different men trying to find their identities, seeking to discover who they are and, more importantly, why they are here. Clark searches for where he came from and Lex, in the words of Superman, “is just trying to find someone to talk to….”  In many ways, Birthright is an impressive illustration of our identity in Christ.

While Clark Kent may dress up as Superman, it’s really Superman that is dressing up as Clark Kent. Clark is the everyday person who works and remains unnoticed, but it’s Superman who is the outward symbol of hope. We may dress up as workers, students, spouses, and/or parents, but our real identity is in Christ.  We may be able to do much in our “Clark Kent” persona, but our identity as Christians is what make us like “Superman”. We can’t fly, jump over buildings, or shoot lasers from our eyes, but our “super-powered gift” is the power to shine the love and hope of Jesus Christ.

While Clark Kent seeks his identity in being Superman, Lex Luthor takes a very different path. Lex is raised by a hard and distant father, and is regularly rejected by those around him. Almost every flashback to Superman’s youth highlights the rejection that Lex faces at every corner. There is one exception to this rule, and it’s that Clark consistently pursues Lex as a friend. Unfortunately, Lex chooses to dwell within his own darkness and develops a deep bitterness for anyone around him, which not only ruins his friendship with Clark, but it also drives him to try and destroy Superman and prop himself up as the savior of those around him. Just as Clark assessed, Lex just wants someone to care about him, but Lex chooses to push away those who do care about him and make himself a hero… only to have this backfire. Sadly, it leaves Lex even more alone.

Birthright is an incredible version of the origin of the Man of Steel. It takes an iconic and well-known character and makes every available effort to showcase why Superman is the beacon of what it means to be a hero. It is definitely one for the re-read shelf and is truly an inspiring story. Even when Superman struggles, he still seeks to protect those around him and stand for the symbol of hope that he has no intent to hide.

- One very gruesome dissection - Some odd, but rare, facial expressions

Superman is the most iconic superhero in comics. He uses his strong moral compass to drive him from Clark Kent to Superman. Superman: Birthright is an excellent graphic novel that really brings to life the Man of Steel. I would highly recommend this for anyone who is trying to get to know Superman better, and why he decided to stand for “Truth, Justice, and the American Way.”