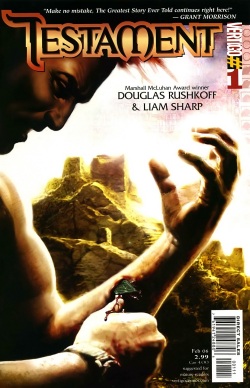 “Oh cool, a graphic novel about the Old Testament with a sci-fi twist!”  is what I said, scrolling through the sales section of the Comixcology webstore. Testament Vol 1, written by Douglas Rushkoff, was $2.99 for five comics and the first three-page sample was all about Abraham and his decision to sacrifice Isaac for God. How could I go wrong?

I neglected to review pages 4-119 of the story which took various turns into NC-17 land. The story is heavily dipped in explicit sexuality and nudity that would make a Game of Thrones fan cringe a little. The problem was that Douglas Rushkoff could have avoided all of that and still told an edgy biblical science fiction story.

Testament Vol. 1 is a parallel story taking stories from the biblical Abraham and weaving it into the dystopian future. Jake Stern’s father, Allan, created a tag that the government is requiring every citizen to have injected into their arm (see Mark of the Beast). This technology was originally used to help find missing children and AWOL soldiers, but now is a tool of the dark powers of the government to track people.  Jake rebels against this order and joins a group of Neonationalists who are uncovering the governments sinister uses of this technology.  There he meets, Dinah, an eighteen year old rebel who built a prophecy chamber that tells the future (think of a hot tub).

When Dr. Green, head of the tracking experiments, uses the trackers to incapacitate a bunch of protesters, Jake watches his ex-girlfriend, Miriam, get captured.  Now he must get the help of his father and the Neonationalists to get her back and uncover the powers behind this evil.

The twist is that Jake’s life is closely mirrored to the stories of Abraham. When Abraham has to decide to sacrifice his son to the One True God, Jake’s father has to decide if he will give his son the tracking chip. When Abraham negotiates with God on who to spare in Sodom and Gomorrah, Jake undergoes the conflict of convincing Miriam not to be part of the protest where she gets captured. Other parallel stories include Lot’s daughters deciding to sleep with their father to have children, while in Testament, Abraham has to save Lot from the forces of King Khammu-Rabi in the Valley of Siddim.

Behind the powers of the evil government that wishes to enslave America and the enemy of The One True God are Astarte and Moloch.  They are powerful gods that represent wrath and desire, constantly manipulating lives in an effort to take over the world.  They use the enemies of Abraham and Dr. Green as puppets for a much more devious world domination plot. The powers of God are controlled by the spirit, Melchizedek, who helps our heroes win battles and protects them. 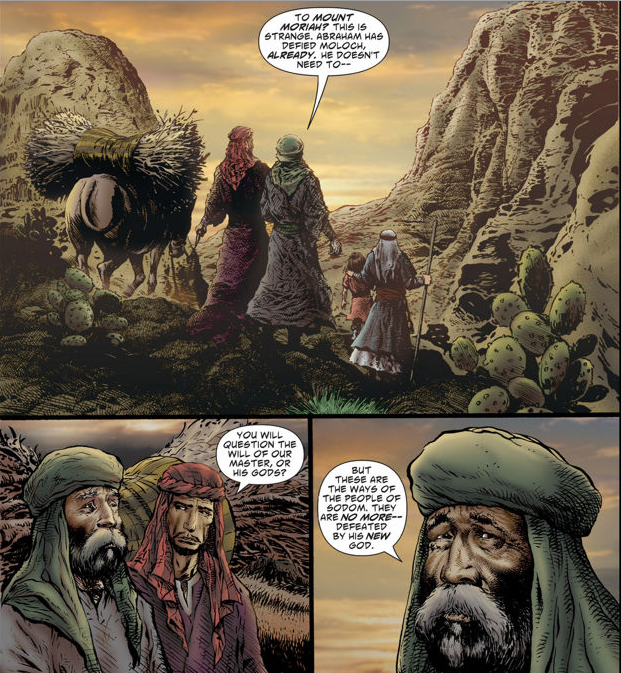 It is always welcoming to see the Word of God get treated to a creative outlet that lures in readers and teaches the faith filled stories of the Bible.  I wanted this series to be the graphic novel that showed writers that God’s word is not just for kids in Sunday School, but can be a compelling and action filled series. The writer, Rushkoff, even admits that the Bible was made for comic panels. For the most part, Testament, is all that and more. The story has a good pace and it leads the reader to the climatic end where Jake, his father and the Neonationalists must fight government robots to save Miriam. Astarte and Moloch are vicious villains that convince the reader they are trying to turn the world into an apocalyptic prison.

Starting with the story art style, Liam Sharpe is the artist behind the panels and the cover. I really didn’t like his style because his black pen lines were way too thick and some of the scenes looked muddy. You could tell he was trying to go for the artistic realism style of comic books from the 70’s, but it ends up being messy. For some reason he cannot draw Jamaicans. There is one Jamaican character who unintentionally looks like Toad from the X-men (not on purpose).

Now for the part I don’t understand. The nudity and sex in the story seems out of place within the scope of the work. It is as if Douglas Rushkoff couldn’t get anyone to read Testament so he ran back to his first draft and drew in a bunch of sex scenes. This story was also published under Vertigo, which has no problem with NC-17 material. I understand that the Old Testament—especially Sodom and Gomorrah—is filled with uncensored R-rated happenings, but the angle and force that Rushkoff takes to display it shows me that he  worships at the throne of Astarte.

80% of the sex in this story could have been adapted to a PG-13 level and still have the same impact. Do the characters really have to get naked in the hot tub of prophecy? Does Astarte really have to be naked to show she is the goddess of desire? Technically, I think most of these scenes  are provoked by the aspiration of attracting an older audience. Still, even the most secular graphic novel fan might feel bombarded by how often it appears.

It might be trite for a Christian writer to tell other Christians and concerned parents not to look at a comic book filled with swearing and nude scenes, but I also wanted to use this space to talk about the reality of the Bible and our responsibility to the art form. As Christians, we cannot stick our head in the sand and neglect the stories about sex, rape, incest, brutality in the scriptures.  We also cannot display them in a way that saturates the mind and takes away from the message. There’s no easy way around this. Can comic books about the faith be made so the young adult generation can appreciate it? Most Christian comic books are geared for middle school ages (The Action Bible, Manga Messiah). I don’t have the answers for the best formula to make edgy yet also God-honoring stories because particular about the matter. This is a good discussion to have, and something that we as Christians should be considering.

Violence: There is spousal abuse in Sodom and enemies getting stabbed with swords and scenes of war. One character, in an attempt to worship Moloch, sets his back on fire. There are scenes of someone ripping the tracker out of their arm.

Sex/Nudity: Astarte, the goddess of desire, is always bare-chested and she is in every issue. Everyone who goes into the hot tub of prophecy ends up naked. There are explicit scenes of sexuality between Jake and Dinah and members of Sodom and Gomorrah. There’s a party where everyone is naked though they are all in the background. Lot’s daughters discuss incest and share their past about being prostitute Priestesses of Astarte.

Swearing: There are couple F-bombs and a few S-bombs. The Lord’s name is taken in vain.

Spiritual: The underlying theme is that there is a battle between gods. You have The One True God who fights for Abraham and Jake and you have Astarte and Moloch who fight for domination. Melchizedek acts as the Holy Spirit who saves the day. The Prophet Elijah and Abraham also make a ghostly appearance to Jake to help him out. In the final battle, the forces of God must team up with Hare Krishna, goddess of the cosmos, to save the day.

Testament Vol 1, is just way too saturated in inappropriate material to be viewed as safe for reading reading. Any attempt for Douglas Rushkoff to make a fresh new take on biblical sci-fi is smeared by a poor choice of content.

+ Great concept of weaving Bible stories and science fiction into one

Testament Vol 1, is just way too saturated with inappropriate material to be viewed as safe reading for Christians. Any attempt for Douglas Rushkoff to make a fresh new take on biblical sci-fi is smeared by a poor choice of content.

I am a minister for Campus Ambassadors, a gymnastics customer service rep, a social media enthusiast and a writer. I try to collect obscure video games, I love comics and somewhere on Amazon I have a self published book. I am married to a beautiful and grounded woman. But most importantly, I have been seized by a great affection in the Lord.