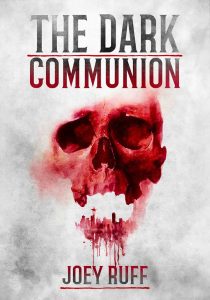 The first book in the “Midnight Defenders” series, “The Dark Communion” introduces us to widower/ex-priest/supernatural private investigator Jonathan Swift, his partner, nicknamed Ape, and a host of human and not-so-human characters dwelling on both sides of the law.

Caught up in a string of terrifying missing child cases, Swift and Ape make several very disturbing discoveries. Imaginary friends may not be “all in the mind,” and formerly weak foes may have accessed untold power. Before they can solve the mystery, Swift, Ape, and Swift’s adopted daughter, Nadia, will have to put themselves repeatedly in harm’s way, facing an evil they’ve never before witnessed…and they’ve seen some pretty crazy stuff.

Swift is a man of many gifts (interpersonal savvy not being one of them); he has the ability to trace the history of certain non-organic objects. He also has “friends in low places,” including otherworldly strip clubs. Both come in handy when he reluctantly takes on the case of a missing child.

It’s not long before he realizes this case is connected to the recent uptick in abductions in the Seattle area, and he finds himself on a path very different than what he had expected.

Toss in a handful of supernatural bullies, lonely kids, missing relatives, lost loves, an armed-to-the-teeth secret society, and plenty of folks with mysterious powers, and you have a combination for a quirky, blood-drenched, and unusual adventure.

All the moving parts come together for an intense finish, with a good payoff.

This is advertised as a horror novel, and it certainly fits into the genre. Despite the author’s desire to reach an “HBO fan base” with pro-Christian imagery and messages, readers should know this novel clearly contains mature themes. Overall, the content is what I might expect from a TV-14 supernatural series on a streaming site (with a little more swearing).

Spiritual Content: The main character has a complex relationship with God some readers might find difficult to manage. Multiple characters are either inhuman or formerly human.
Violence: Violence against children, fist-fights, gun violence, and paranormal battles.
Language/Crude Humor: There are several instances of crude language. F*** is used three times, along with numerous other curse words; the Lord’s name is taken in vain on several occasions; and slang terms for parts of male anatomy are present.
Sexual Content: A scene at a strip club is featured; a rather explicit (attempted) sex scene…Lorelai and her sirens, after all, are based on the seductresses of ancient myth, who lure men into their clutches with their beautiful bodies and voices. Women are frequently described from Swift’s POV in regards to how attracted he is to them.
Drug/Alcohol Use: Minimal. Scenes take place in bars, and one paranormal character enjoys drinking, but drugs/alcohol are not a major focus of the plot.
Other Negative Themes: Several characters have questionable ethics. Many characters lose or have lost family at some point in the story.
Positive Content: Swift’s relationship with his adopted daughter is inspirational and refreshingly positive in a book that deals with very dark material. A priest is an interesting and positive representation of the church. Swift’s dogged determination to solve a frightening mystery is admirable. Underlying theme of the dangers of isolation, especially for young people. We see several characters truly devoted to their families even amid very difficult circumstances.

+Tons. Of. Action. Jonathan Swift is very much a “blow-it-up-now-ask-questions-later” kind of guy, which makes for many exciting chase and fight sequences, bloody brawls, and gunfights.

+Ruff does a sly and effective job of blending the real world with a supernatural one. Swift has a “gift” for communicating with a wonderland of otherworldly friends and foes, and Ruff’s take on this makes for an interesting tale; some folks believe Swift is a madman, while others are unfazed by his chats and brawls among demons, sirens, and the like.

+ Nadia is a great female character. She is young but powerful, optimistic but not idealistic. She is allowed to have “fun” while taking “monster-hunting” seriously. At one point, she is seen having given serious thought to what she is going to wear on her first real mission (settling on something that looks suspiciously like something from the laundry basket of a post-apocalyptic superhero); a few scenes after that, we see her as a capable, intelligent, quick-thinking fighter. I am looking forward to watching her grow as a character, hero, and young woman.

+ Swift’s relationship with God is complicated – and believable. This series is meant to be an HBO-level entry into a pro-Christian world, and I feel Swift is ultimately being set up for some serious revelation about the nature of God, the universe, and faith, but clearly he is not there yet. I do want to see where he is headed and how he will be getting there.

+ This is a very different world than the typical one of supernatural horror. Instead of creepy spirits and demons invading our world, they co-exist (we humans, for the most part, don’t know it, of course). “Midnight Defenders” like Swift work in the shadows to keep us safe, but they also use supernatural creepies and beasties as informants and allies. Fae, demons, sirens, ghosts, and the supernatural cast of characters from many different cultures come into play, which definitely makes for an interesting read and some twisted relationships.

– Swift reads like a tone-deaf chauvinist in a post “#metoo” world. Nearly every female character is introduced in terms of Swift’s level of attraction to their bodies. One of his primary antagonists, a leggy law enforcement officer named Stone (who seems to be an old flame of Swift’s), is introduced as little more than an angry, shrill harpy, and it’s difficult to take most of his female characters seriously after that. They are entirely too one-sided: Stone is the shrew, Lorelei is the seductress, Nadia is the innocent, and Lara is the fallen angel. There’s not much in between. I desperately want to see more thoroughly-developed female characters in future novels.

– Swift’s back story is simultaneously trite and a little bit of a stretch, even for a tale of demons and fae. Without offering up too many spoilers, a tragic event happens to him and when he turns to God, he feels rejection and emptiness. He is now a “monster hunter” as well as a former priest.

– Swift’s “Britishness” seems forced at times. His language drips with the tacked-on pet name “love” for nearly everyone. Every time he describes himself, I see a less-than-appealing mashup of Spyke from “Buffy the Vampire Slayer” and John Constantine from “Legends of Tomorrow.”

– There is a lot of violence, including both graphic and “offstage” violence against children, which can be hard to read; I don’t assume it is a negative for all readers.

– Ruff’s writing is sometimes hard to follow. At times it is beautiful, borderline poetic, while other times it reads, albeit briefly, like a trashy pulp novel. I think future novels would do well with a more consistent narrative voice.

This is a compelling read that serves up a hefty dose of action, violence, and a protagonist you may dislike. But he, and the series, have potential if he is willing to learn from his mistakes. It's a book to avoid if you are sensitive about violence, crude language, or cruelty towards children. It's a book to pick up if you are thrilled with the supernatural and the promise that light, no matter how dim, is still stronger than darkness.