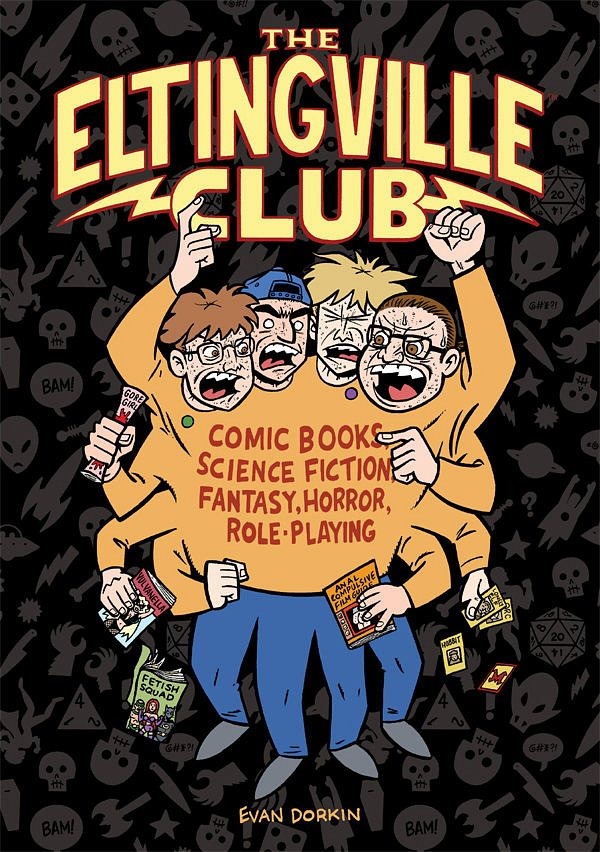 Rated Mature, for the most heartless of nerds, or those with a tough skin and good sense of humor.

The Eltingville Club is a hardback collection from Dark Horse comics that compiles all the stories from Evan Dorkin’s comic series “Dork!” into one glorious hardback edition. It focuses on the lives and horrendous adventures of a hard-to-the-core nerd club that seems to cause havoc wherever they go. See the honest and hilarious social and cultural commentary on everything wrong in fandom amped up to 11!

Violence: Tons of fist fights, using pop culture and nerd paraphernalia to settle disputes in a violent manner, people being nearly stomped to death at Comic Cons, zombie crawls, etc. It’s a comic, so its a tad over what you’d find in a Looney Tunes cartoon.

Language: Any word a sailor uses is good enough for most of the script in this comic. Used to settle disputes in nerd rhetoric, harassing QVC hosts over the air, and f-bombs to level the world over. I’m not going to sift through this comic word for word, but if you can think of it, it’s in there.

Sexual Content: Nerd male fantasies of receiving oral sex from cosplayers (nothing graphic is shown), cartoonish female cosplayers drawn (nothing revealing being shown), and some instances of poorly drawn nude women on books or magazines as background art here and there. Sexism towards women in this comic is made to be in poor taste, not supported.

Spiritual Content: The moral of the story is to never end up like these nerds. It’s satire done very well, but anyone with some sort of conscience and half a brain would never want to end up like those in The Eltingville Club. The reader can have an enjoyable chuckle in what they go through because they did it to themselves and deserve it.

“I call this meeting of The Eltingville Comic Book, Science-Fiction, Fantasy, Horror, and Role-Playing Club to order!” Well, it’s probably a good thing such a club doesn’t exist as far as I know, and I’ll explain why. Only a true comic dork could write something so foul, vile, and on the mark on the worst side of fandom that it could be translated so well to the fanbase it’s commenting on. Look no further than the true Eisner Award winner dork himself, Evan Dorkin. 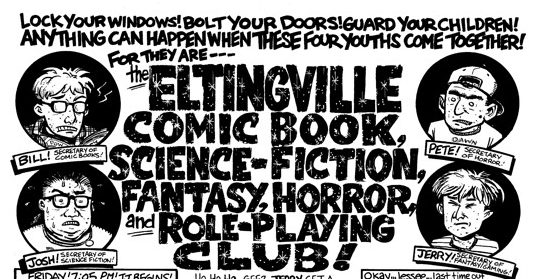 In 1994, Evan Dorkin was already a few issues into his comic series Dork! before he decided to say something about the world of nerd fandom, but in a unique way. He took everything out of anger and what he loved about fandom, morphed them into four separate beings on the comic pages, and gave them a club.

These characters are Bill, Josh, Jerry, and Pete; the four horsemen of the nerd-ocalypse! On the outside, people view them as a close-knit group of friends, but within that nerd circle is a dysfunction of over-inflated egos, close-minded ideas, ruthless dishonesty, criminal acts, and pure hatred crammed into every biological fiber of these super nerds. If you thought your group of nerdy friends acted bad at times, then they’re boy scouts compared to The Eltingville Club.

There are only a handful of stories done about The Eltingville Club, but each will hold its own for years to come. These stories should hit the heart of every person reading them, because it’s easily self-identifiable to the reader. They either know people who are like this, or are those people within the fandom. They serve as a warning sign to those who read this comic, and it may even offend them. This is Dorkin’s commentary on nerd culture the way he sees it, which is apparent if one were to be truly honest with themselves. At the same time, they are the most entertaining stories you will ever read.

The adventure of the club consists of members getting into physical brawls over trying to seduce women in Dungeons & Dragons while missing their own prom (I missed mine as well, but it wasn’t over D&D), fights over not seeing Tasha Yar naked, fighting over controlling a comic book shop, starting fights at the local zombie crawl, starting fights with QVC hosts on the air, and fighting over who gets to own a Kenner Boba Fett figure through the ultimate form of nerd rhetoric: THE TRIVIA OFF!

That’s just the fighting part, because we can’t forget the two counts of arson, starting riots at San Diego Comic-Con, home property damage over a Twilight Zone Marathon, getting kidnapped by anti-nerd groups to deprogram their nerd ways, and countless other offenses that would make any modern social justice warrior foam at the mouth for insulting their ideas with sexist remarks toward female fans. And guess what…that’s not the worst they can do. 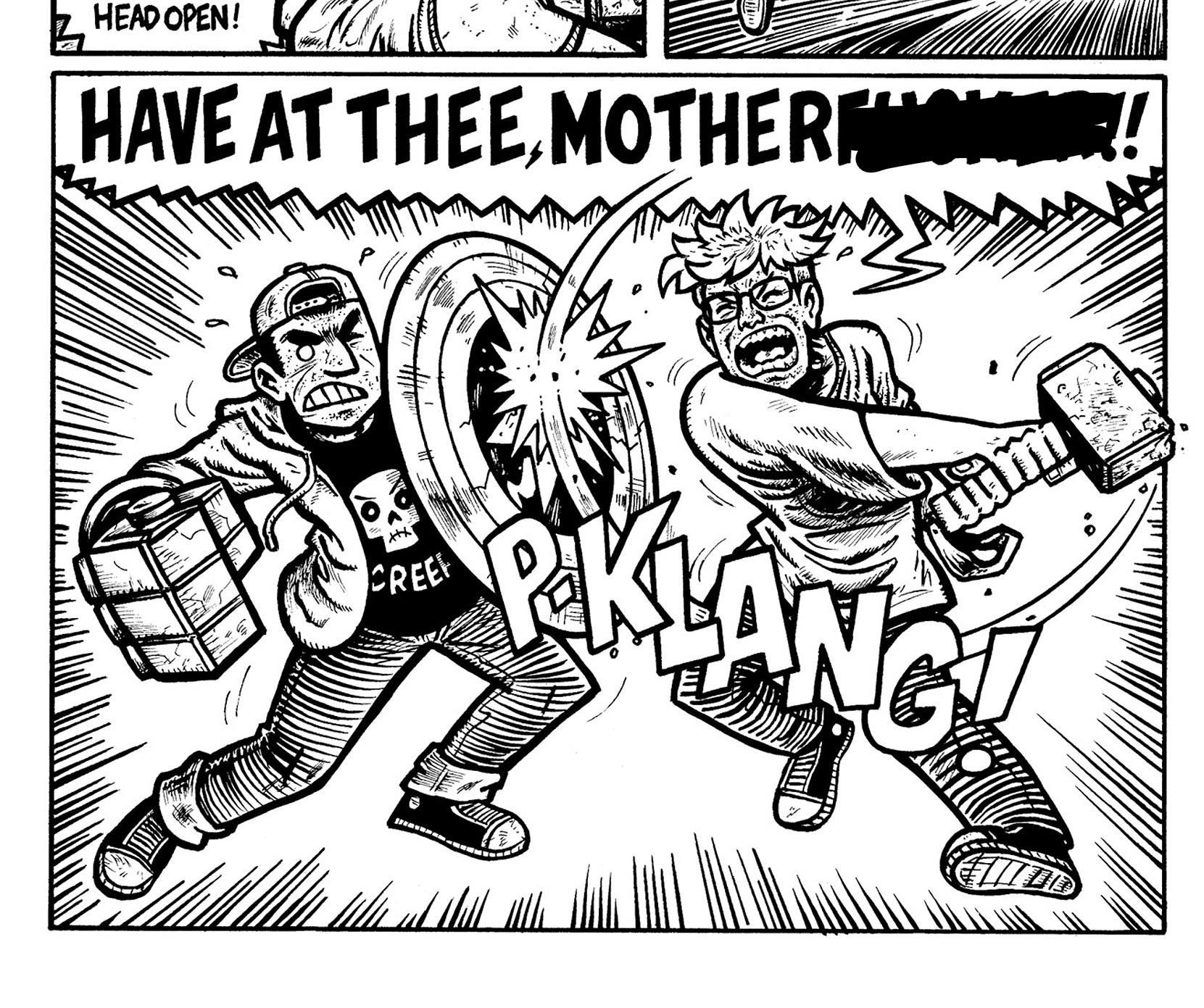 I should mention this comic is pure fun, because it really is. The aspect of social commentary is what makes The Eltingville Club so intriguing. It’s self-serious enough to get the message across, but is satisfying at the same time  because the members of the club always get what’s coming to them. They’re never meant to come out on top or be better people; we just get a peek into how low these nerds can go. The answer is quite simple: they go as low as the fandom will let them, and that bar drops lower each day.

The other commentary by Dorkin is on the world of the comic shop; the local mecca to nerds who are within commuting distance of one. One of my other favorite characters is Joe, the owner of the local comic book joint the group frequents to complete their collections and feed their fandom. Dorkin takes all of the comic shop owners he knew and bundled them into Joe, who runs his shop like most comic book places still do.

Joe is someone who is too cheap to fix the ceiling and puts in a kiddie pool to collect water, uses a laser pointer to assist a customer in finding something so he doesn’t have to leave the counter, and overprices items to keep his business surviving. Based on my personal experience, these are traits I’ve witnessed over and over again when walking into such shops.

Joe also has some good insight knowledge on the world of comics, and why discounting items is like “giving away unscratched lottery tickets.” The way the comic market is going, things that have been cheap for years will go up in value whenever movie studios want to use a comic book character, and that means demand for the comics will go up. This means comics that have been worthless for years are now helping someone like Joe make bank, which helps someone like me understand the inner workings of why shops are run the way they are. It’s the little things like this that are why I love this series so much. 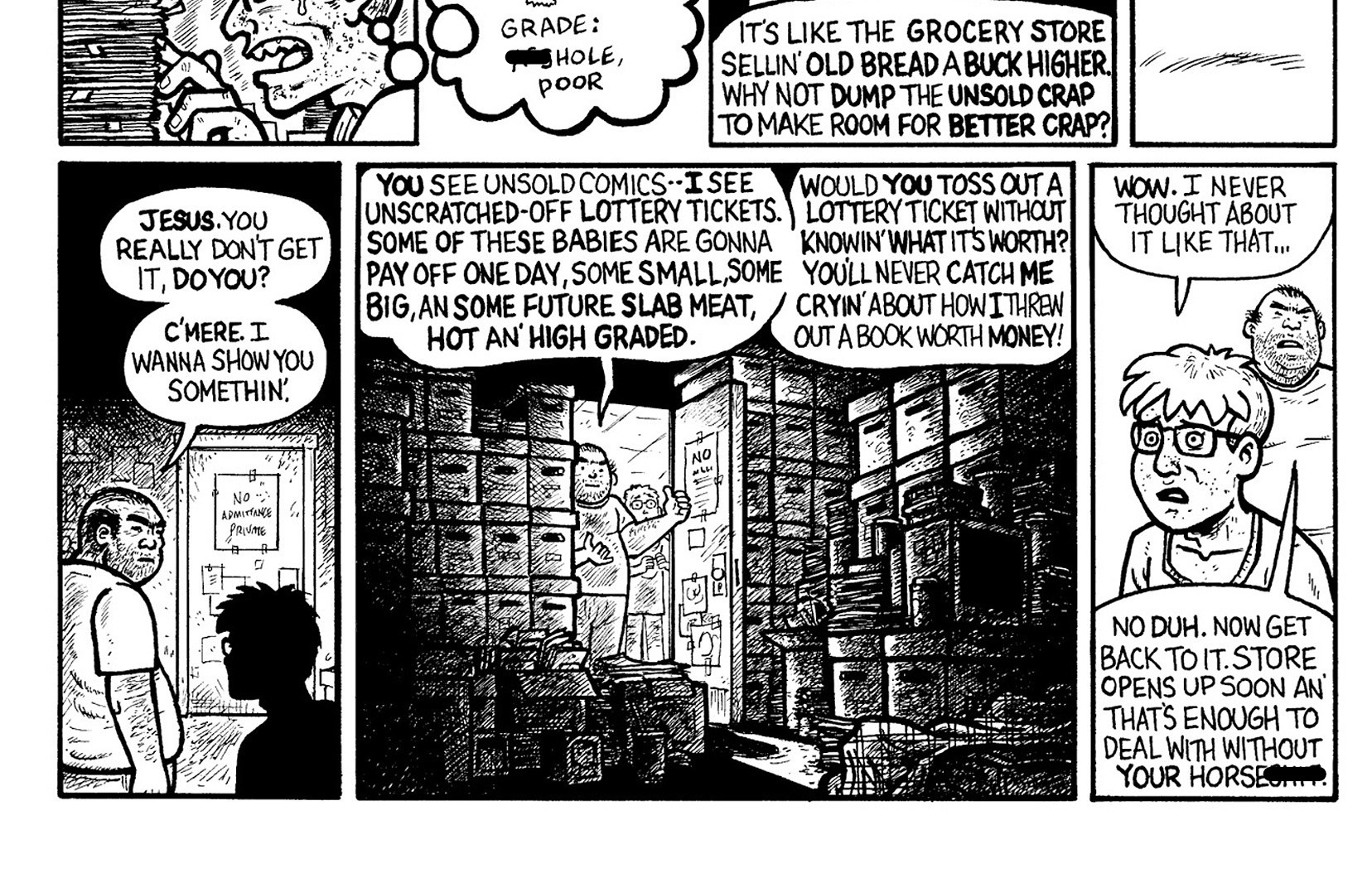 Like it or not, this is how most comic stores stay open and have lasted for years.

Eltingville is done out of so much love that it’s still one of the most entertaining comics I have ever read, and I have been a fan for many years. I actually didn’t know about The Eltingville Club through the Dorkin comic series, but through the animated pilot that aired in 2002 on Adult Swim. I actually didn’t watch the pilot until months later when I found a rip off it on the internet, and that’s where this show captivated my attention.

Now you can watch it with a Japanese Dub!!

The pilot adapts one of the stories where two members of the club, Bill and Josh, battle it out for a collectible Kenner Boba Fett with a Trivia Off. It’s safe to say that either the questions and answers in the Trivia Off were stuff Dorkin knows personally, or witnessed once in a comic book shop between two basement dwellers over a figure one time. The only answer to that lies in the head of its creator. The only physical media the pilot has ever been released on is the Adult Swim in a Box set released in 2009. Here I’ll throw in my hat as a Ska fan…The Aquabats did the theme and ending song to this show. Once its in your brain, you’ll never get it out!

As for recently printed media, Dorkin was able to conclude the club in a two-part issue having the group finally break up and then reunite a decade later. A running joke in the comics is at the end of every issue, the author would ask “Is this the end of The Eltingville Club?” Based on how this final issue went, they are officially done forever. I say it’s a good end to a fantastic series that has lasted over 20 years in comic form.

Eltingville didn’t go out with a bang, but a mere somber whimper trapped in the Ecto 1 surrounded by nerds at San Diego Comic-Con. It just seems to be the best way to end it all: with them still being bitter fans until the end.

As much as I want to have an Eltingville Club show brought to life, I’m not sure how long it would last on TV with today’s current fandom just not “getting it.” It is likely to be considered more offensive than enjoyed. If millennials read the Eltingville Club, they would demand Evan Dorkin’s head on a platter, because the world has become viler since this comic was first conceived. It goes to show the world hasn’t really changed.

In terms of time setting, this was created in the mid-1990’s. One can look at the comic as an honest time capsule of hot button issues for nerds. One such example would be their attempt to send in letters under assumed names to get the SciFi channel to air in their area (yes, that SyFy channel before they changed their name and decided to line up half the network with reality nerd shows no one cared about like “Heroes of Cosplay”).

This was also at a time where the only comic book movies being made were the Schumacher Batman films. Nerds chanted and cheered, “this is our time, look at these great films coming out!” In reality, they just had to wait 15 years before they saw their Marvel heroes on the big screen that have totally transformed comics from a niche hobby to a pop culture money maker. Of course, the Marvel Legends figures would be top tier figures to collect compared to the ToyBiz X-Men figures. Total night and day difference.

If this article has piqued your interest in reading about Eltingville because you wanna “get it,” then you can get the hardback with all of the stories plus bonus material from Dark Horse. If you are a collector of lunch box tins, then they got you covered there as well.

It sadly is Jerry…. it sadly is…

+ High attention to detail in each panel in the comic. Looking for little things as a nerd will surprise you.
+ A comedic brutal side to fandom that's straight to the point.
+ Go buy this already!

- Length of series should've been longer
- No full animated series other than the pilot that got adapted
- That's all I got!