Avengers: Infinity War is rapidly becoming one of the most successful films of all time. Having become the fastest film to earn $1 Billion in gross, the movie has become one of the most successful films ever. However, that film was inspired by a critically acclaimed 1991 comic storyline called The Infinity Gauntlet. 27 years later, that graphic novel’s success has gone on to inspire generations of comic book fans and filmmakers alike.

Spiritual Content: A character declares themselves a God after garnering omnipotent power.

Positive Content: A depiction of selflessness and heroism in the face of oblivion. 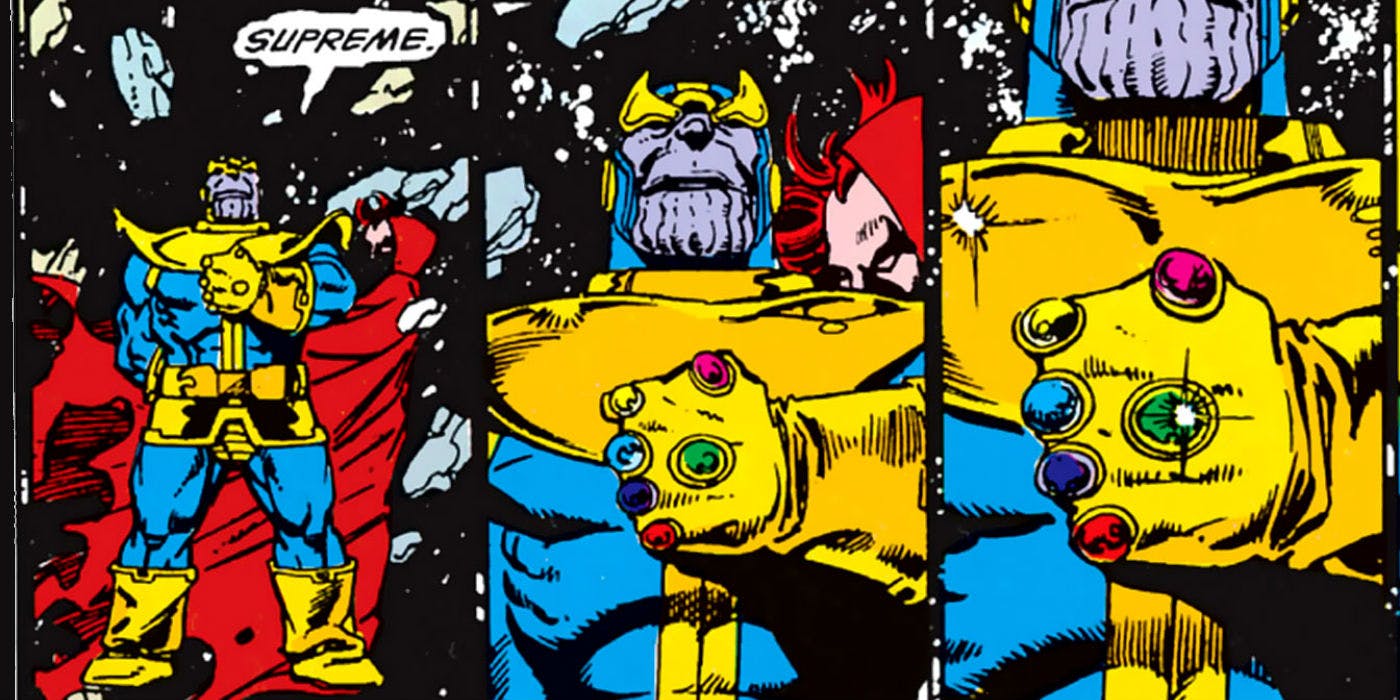 When we meet Thanos, the “Mad Titan,” in Avengers: Infinity War, he’s introduced to us as a malevolent tyrant. However, as the story unfolds, we come to understand him as a different sort of character. He sees himself as the hero of his own narrative. He’s an evil sociopath certainly, but his goals of eliminating life to preserve finite natural resources at least seems visibly understandable. His personality isn’t even necessarily “mad” as his title proclaims, merely his actions are. As we see him, he’s a fairly level-headed and intelligent being. He doesn’t even bother to kill a number of major characters attempting to kill him — possibly because they aren’t a threat, but likely because he doesn’t want to take additional life more than he has to beyond his goal of killing half the universe. At the end of the day, he wants to use the Infinity Gauntlet to attain his goal specifically because it will allow him to kill the most amount of people possible in the most merciful and painless way possible. If his actions didn’t leave death in the trillions in his wake, the movie’s representation of Thanos would almost be sympathetic. 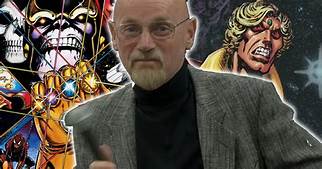 The Thanos of Marvel Comics is a completely different being entirely. What is failed benevolence in the film is active nihilistic malevolence in the comics. He was the creation of comic books legend Jim Starlin; the man responsible for a great deal of Marvel’s best cosmic stories. Thanos’ role in the comics — starting with his first appearance in Invincible Iron Man #55 — portrayed him very much as a malevolent force of destruction.  His story weaved across multiple Jim Starlin cosmic comics including Captain Marvel and Warlock for the better part of two decades before the character died in canon. With the rise of event comics and the success of the year long Secret Wars event mini-series, Marvel began to push the event bandwagon ahead and slowly began seeding future cross-series events to draw all the characters together. The planning started to come together in 1988 with Starling resurrecting Thanos in the pages of Silver Surfer, which he was in charge of at the time. Over the course of the next three years, he began to seed the comics to build up towards the planned huge event. In fall of 1990, the 2-issue miniseries Thanos Quest paved the way for the following year’s planned huge event. Thanos had been resurrected by the embodiment of death to fulfill a specific mission for her. She disdained life and wanted to kill half the living beings in the universe and Thanos, despite his immense power, wasn’t able to do it alone. In order to succeed, Thanos discovers the power of the Infinity Gems and begins a trek across the cosmos to collect the six all-powerful gems which each grant an element of immense power to the wielder and together grant the wielder total omnipotence. After collecting the six gems, Thanos returns to Death, but now wielding the power of a god. With it’s launch in July of 1991, this is the point at which the story of The Infinity Gauntlet begins. 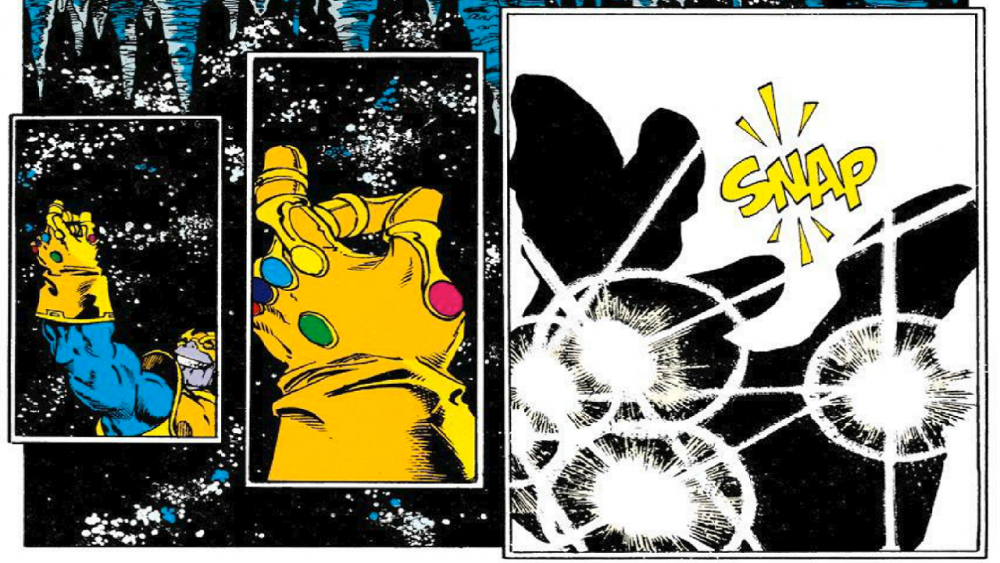 The Infinity Gauntlet begins where Avengers: Infinity War ends. Thanos is now all-powerful and merely with the snap of his hand, half of the population of the universe fades into nothingness. In the comic, we see this causing chaos across the universe, but most specifically on Earth where half of the superhero population of the planet is now suddenly missing. As this is going on, a small event begins churning in the background. When a group of young people drive themselves off the edge of a bridge, getting killed in the process, three beings use this opportunity to take the empty bodies of three dead humans as a change to resurrect in new bodies. The leader of this bunch is Adam Warlock, another of Starlin’s most famous and important characters. Warlock is something of the thematic opposite of Thanos. The two have fought and partnered up on numerous occasions and have grown to have great respect for one another. Warlock himself had been trapped in the Soul stone for the duration of the time before his resurrection in The Infinity Gauntlet. Having been trapped in the stone that is now affixed to Thanos, Warlock has a unique insight into the mind of the Mad Titan who now stands (literally) at Death’s doorstep. 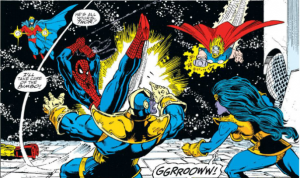 With Warlock resurrected and the Silver Surfer on Earth to warn the Avengers of what is transpiring off-world, Warlock, Silver Surfer, Doctor Strange, and the surviving Avengers gather together to begin implementing a plan to defeat the omnipotent Thanos in conjunction with help from the vast array of cosmic beings of the Marvel Universe. This includes Galactus, Eternity, and dozens of the universe’s most powerful beings. While this is happening, Thanos, joined somewhat reluctantly by the Marvel Universe devil Mephisto, is trying desperately to ply for the attention of Lady Death. Despite Thanos fulfilling her desire to kill half the universe, she has grown to slowly despise Thanos and his omnipotent power. She once loved Thanos deeply, but as a cosmic being she cannot abide by being in love with a being who seeks to be more powerful than her and who merely attempts to please her with petty acts of violence and degradation. As such, Lady Death refuses to even speak a word to the Mad Titan. Thanos bellows in rage, causing vast swaths of psychic energy to blast through the universe. Even with Earth being as far away from Thanos as it technically is, the 2% strength wave that hits the Earth is powerful enough to knock the planet off it’s orbit. The Earth’s time is running out rapidly. The only thing that can save the universe is for Warlock’s plan to succeed and for someone to rip the Infinity Gauntlet off of Thano’s wrist. With his complete control over everything there is nothing he does not know. Any attack that comes at him has to be done in such a way that Thanos would willingly give up his power and let beings fight him on even terms. Thankfully Adam Warlock knows all of Thanos’ secrets and his plan is designed to make exactly this happen.

The Infinity Gauntlet is Jim Starlin’s ultimate love letter to his creation. It isn’t merely a nihilistic power trip, but a love story and a character study all about Thanos and what drives him — even as he claims that nothing truly matters to him. While just about every major or minor Marvel character in publication gets a small appearance, the entire story is driven entirely by Thanos and Adam Warlock’s actions. Most of the characters are just there to react to the horrors of what Thanos’ omnipotent power allows him to accomplish. The story plays out according to his psychology. The revolutions that Warlock reveals provides a new dimension to the Mad Titan that hadn’t been there before. The plethora of sequels to the book, including Infinity War and Infinity Crusade, never quite recaptured the magic that this comic managed to possess. Even so, the storyline built up Thanos as one of the greatest villains in Marvel comics for a generation of fans. There is a reason why they ended The Avengers in 2012 with just a tease of the Mad Titan getting a chance to “court death”. Fans of the comics knew that the “snap” of Thano’s fingers was coming and what it meant. It’s very hard to tell where Avengers 4 is going to go and it’s more than safe to say that at this point it’s going to diverge significantly from the story presented in The Infinity Gauntlet. Regardless,The Infinity Gauntlet may very well be the greatest Thanos storyline in Marvel history and fans of Avengers: Infinity War should seek it out to see the Mad Titan in his original form.

The Infinity Gauntlet has gone on to become one of the most important and successful graphic novels in comic history. There is a reason it's the basis for the most recent Avengers films. It's a grand, melodramatic love story driven by one of the best villains Marvel Comics has ever conceived.