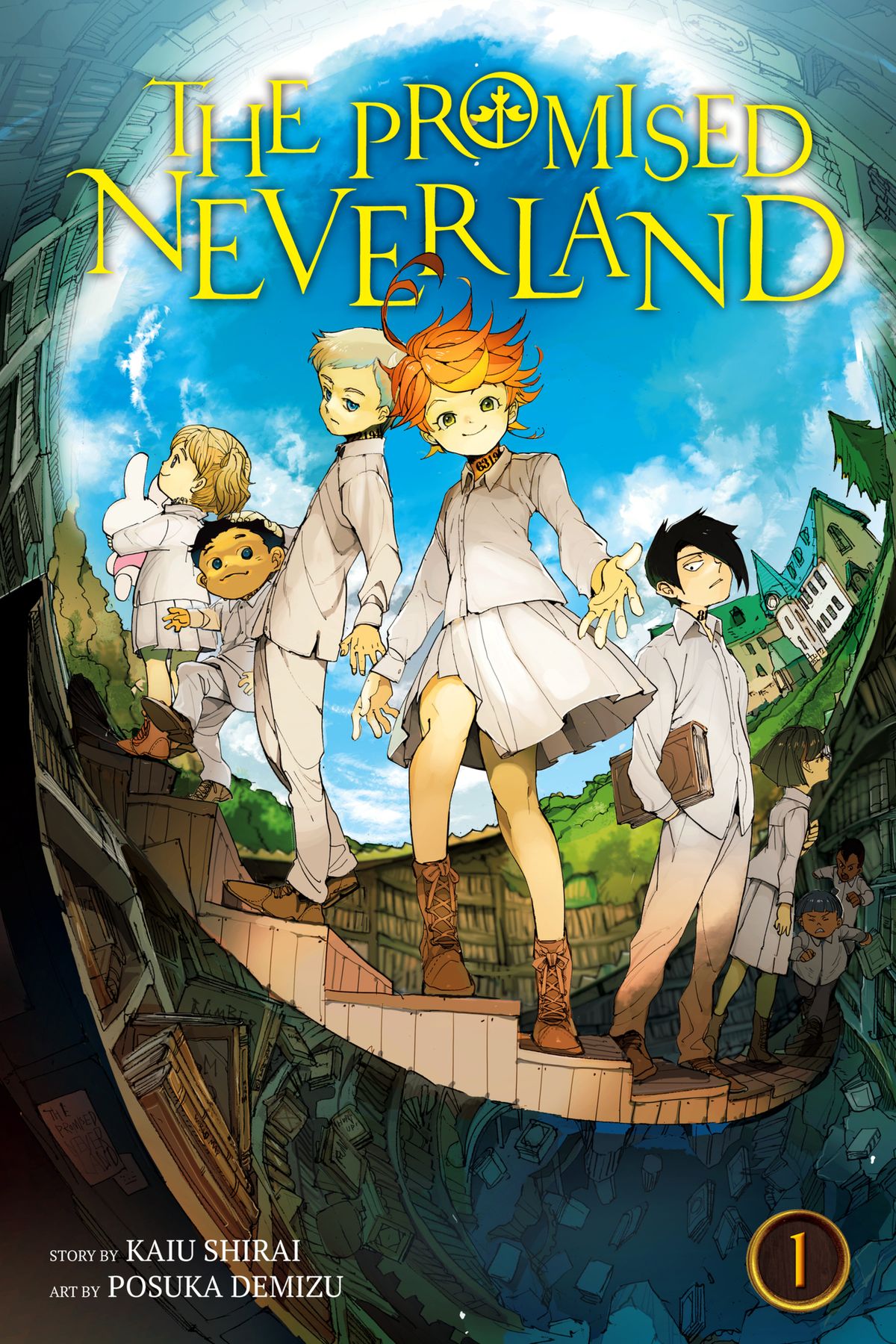 The Promised Neverland is a unique shonen manga which made its way to Weekly Shonen Jump a few years ago. A group of orphans discover their home is actually a farm where they are bred to become food for monsters they call demons. The anime adaption released a highly anticipated first season in January 2019, and its dub premiered on Adult Swim’s Toonami a few months later. Unfortunately, the second season was delayed due to COVID-19 (it is now due to air in January 2021).

Amidst the uncertainty of the anime, however, fans can indulge themselves in several other projects of the series. Both a Japanese live action movie and a Western live action television series are in the works. With the anime’s first season coming to Netflix and the manga’s final story arc officially wrapped up, this seems a good time to start at the beginning.

This review will cover the whole first story arc, stretching from Chapter 1 to Chapter 35. In terms of collected editions, that includes the first four volumes and the beginning of the fifth.

Note: Pictures are taken from both digital and paperback formats of the official VIZ Media volumes. Remember to read from right to left for the best effect.

Violence: The premise of this series involves young children being farmed to feed demons, and the illustrations leave no room for doubt about this. While no one is eaten on the page, dead kids can be seen in nearly every chapter via flashbacks, nightmares, or present reality. That said, the gore in these volumes is mild. Blood is used sparingly, and when one character breaks her leg, only a smattering of bruises decorate the area.

Scary Images: For this manga, I felt it best to separate the violence and scary images categories. Suspense and unease drive this story, and creepy illustrations are a big part of that. Pictures show the adults in unnatural angles, giving them a disturbing vibe. Books cannot easily have jump scares, but there are some moments Mom appears out of nowhere. 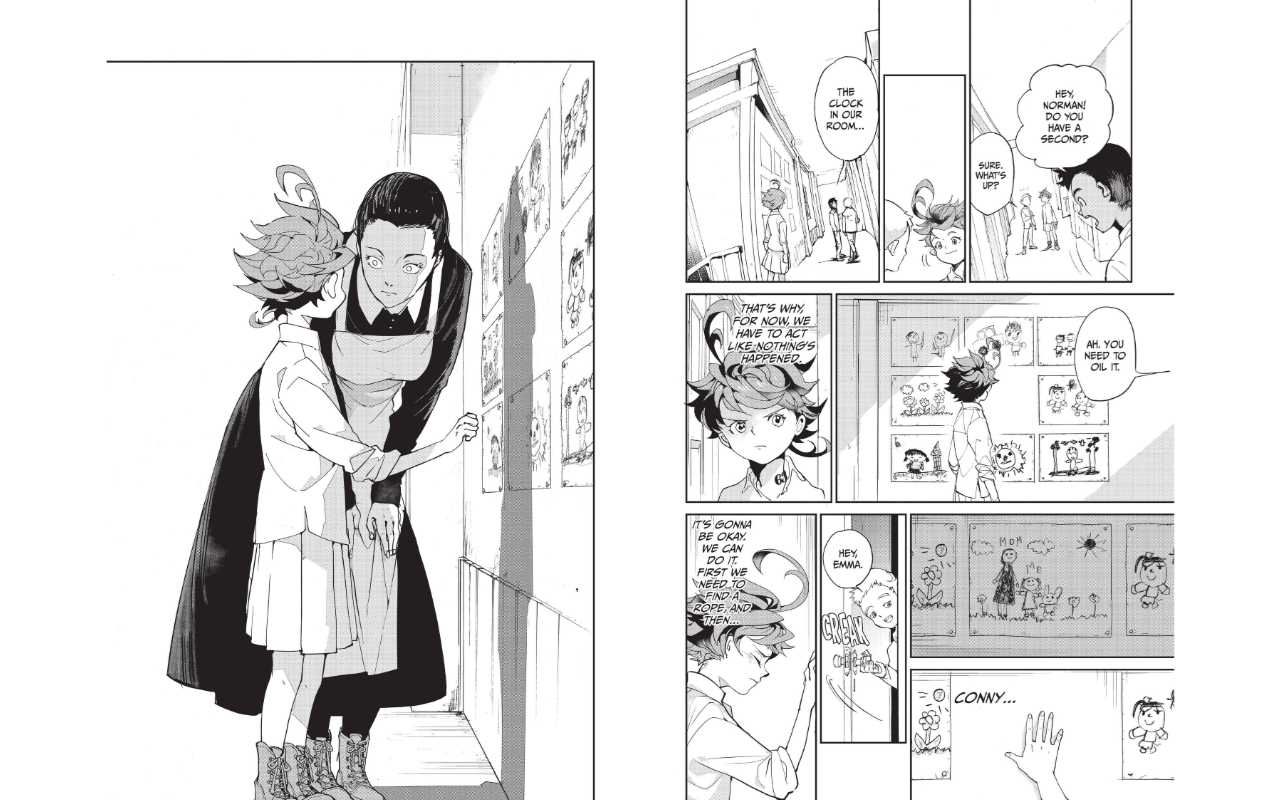 Mom watches everyone very closely… a little too closely. 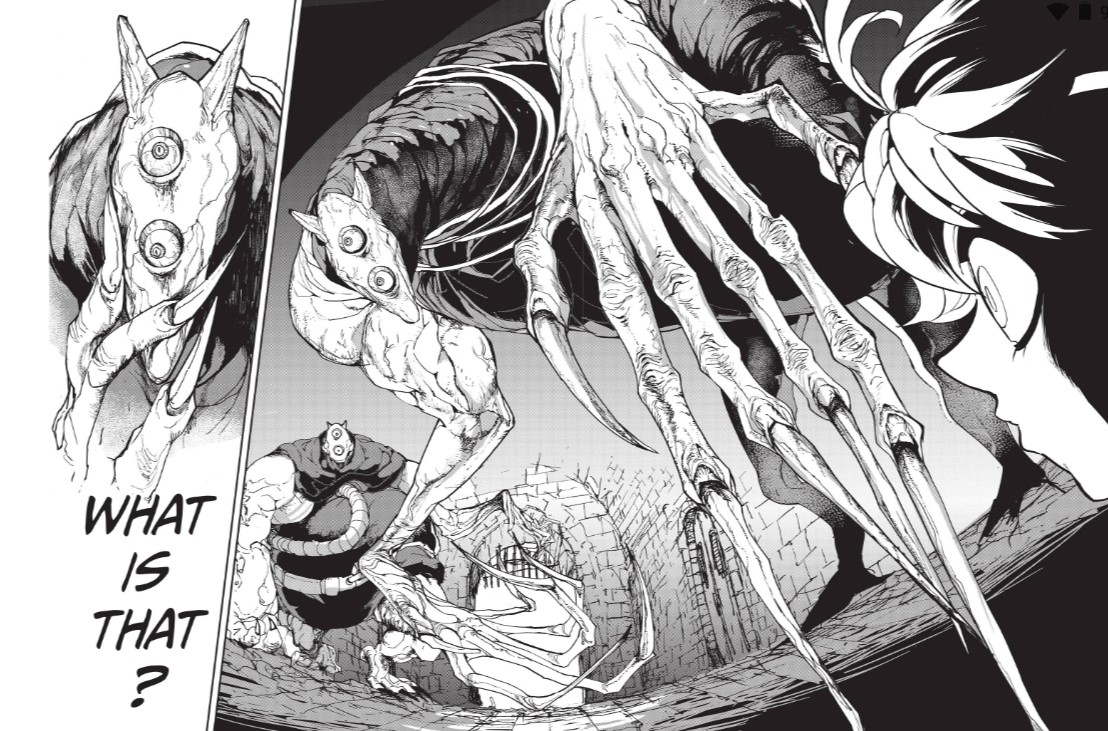 Sexual Content: Odd illustration angles may accentuate adult women’s curves, but this is for the purpose of unsettling the reader, not sexualizing the characters.

Other Negative Content: One character is a traitor to the family and complicit in the deaths of multiple children. The adults in this world agree to raise kids and hand them over to demons as food. Norman and Ray consider killing their caretakers in order to escape. Many characters act purely out of self-interest with no regard to those around them.

Spiritual Content: The monsters are called “demons” by children with limited knowledge of the outside world. Once a year, the demons sacrifice their highest quality child to an entity they seem to regard as a god.

Positive Content: Emma refuses to leave any of her family behind when they escape Grace Field. She forgives the traitor and insists on escaping with them, regardless of the danger they may pose. All the children love their family and are able to work together for the common goal of escape. 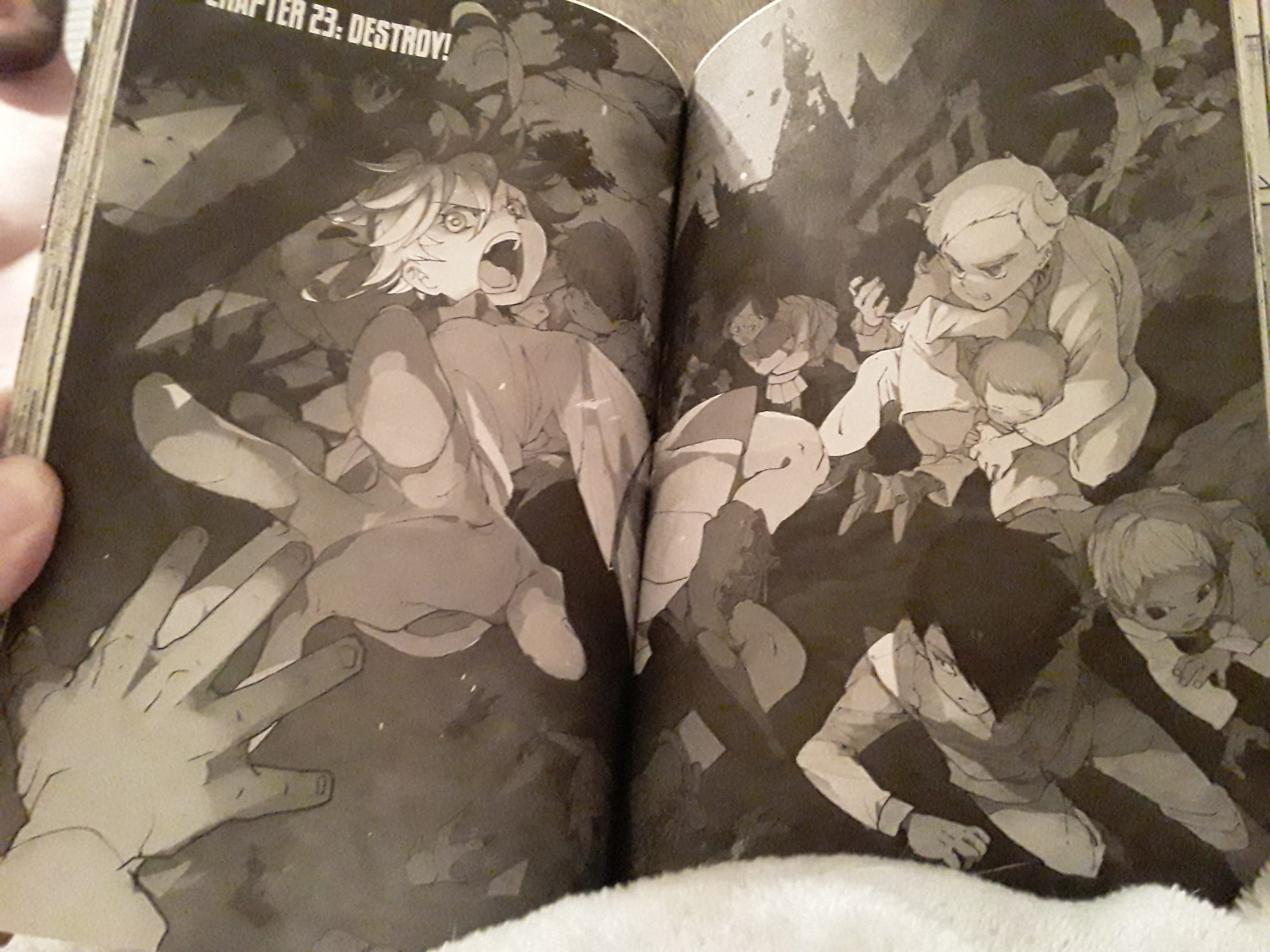 The two page spreads are gorgeous!

The Promised Neverland is an atmospheric look into the dark world of Grace Field House. Emma, Norman, and Ray are the oldest and smartest of the orphans. They spend their days playing tag, reading, and caring for their juniors. Emma and Norman discover the House’s terrible secret and share it with Ray, who helps them plan an escape.

That description alone prepares the reader for what is in store. Terrifying conspiracies, elaborate schemes, dubious betrayal, and genius children all play a part in this first storyline. Unlike other shonen manga, the majority of characters are under twelve years old, including toddlers and babies. Its unique art style highlights the trio, but also shines with background characters. Like a real orphanage, tiny tots crowd into the panels, making funny faces or crying. 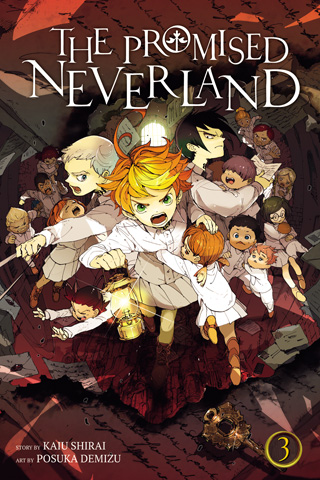 Even great stories have downsides. While the plot keeps readers guessing, the main characters are ones we have already seen. 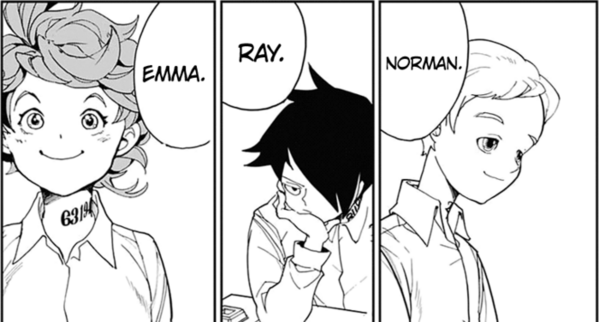 Emma is your stereotypical ditsy girl character. She is bright, but not as smart as the boys, and her overly trusting nature makes her naïve. While her feet are swifter than anyone else, she can never win a game of tag against Norman. Out of the three, she has the most trouble hiding her feelings, resulting in exaggerated facial expressions.

Ray is always reading, and his book knowledge combines with a nearly supernatural memory to create street smarts. If Emma is the athlete, Ray is the manipulator. His impassive face and neutral demeanor allow him to manage crucial events from behind the scenes. He is the classic “brilliant but lazy” boy, which TV Tropes describes as “more than capable of taking care of any situation the heroes have to deal with, but doesn’t care. They’d rather relax and do nothing to help.”

Norman is intellectually the smartest of the bunch. He is a brilliant strategist, capable of anticipating nearly any move the enemy makes. His kind heart is a weakness, and he often follows Emma’s crazy plans to appease her. Though care is clear in his actions, Norman is careful not to let his expressions give away his thoughts.

Unfortunately, the clichés do not stop there, and others are not so harmless. Sister Krone, one of the only BIPOC characters, is introduced in Chapter 5, and her appearance is not flattering, to say the least. 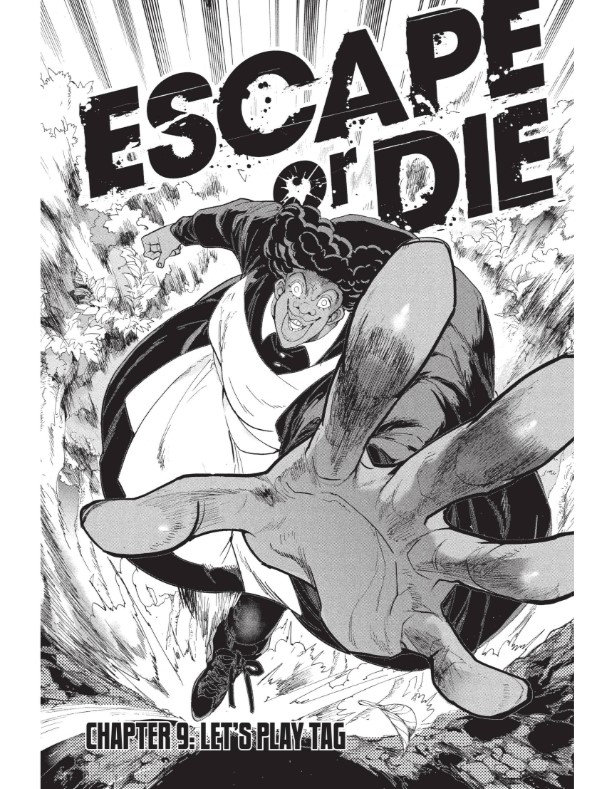 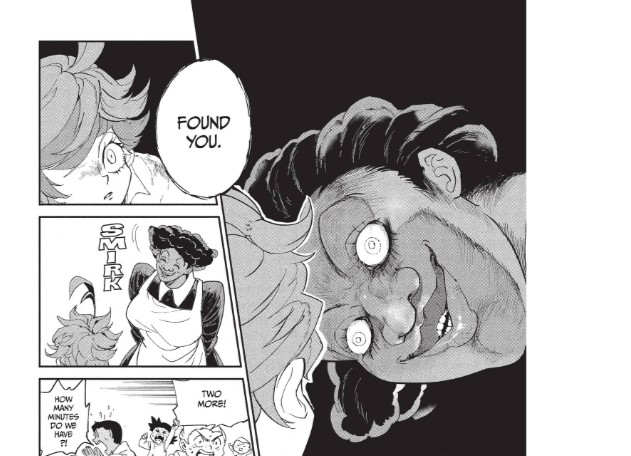 In a world where Black Lives Matter is gaining momentum, seeing such an outdated and offensive portrayal of an African American character hurts. This manga is not recent, but neither are these issues. Looking into it more, I even found an article called “What Black Anime Fans Can Teach Us about Race in America” from 2015, a year before this manga was published (slight language warning for the article). I understand the adults are supposed to be creepy and disproportionate, but there are better ways to portray that without resorting to old racist portrayals. 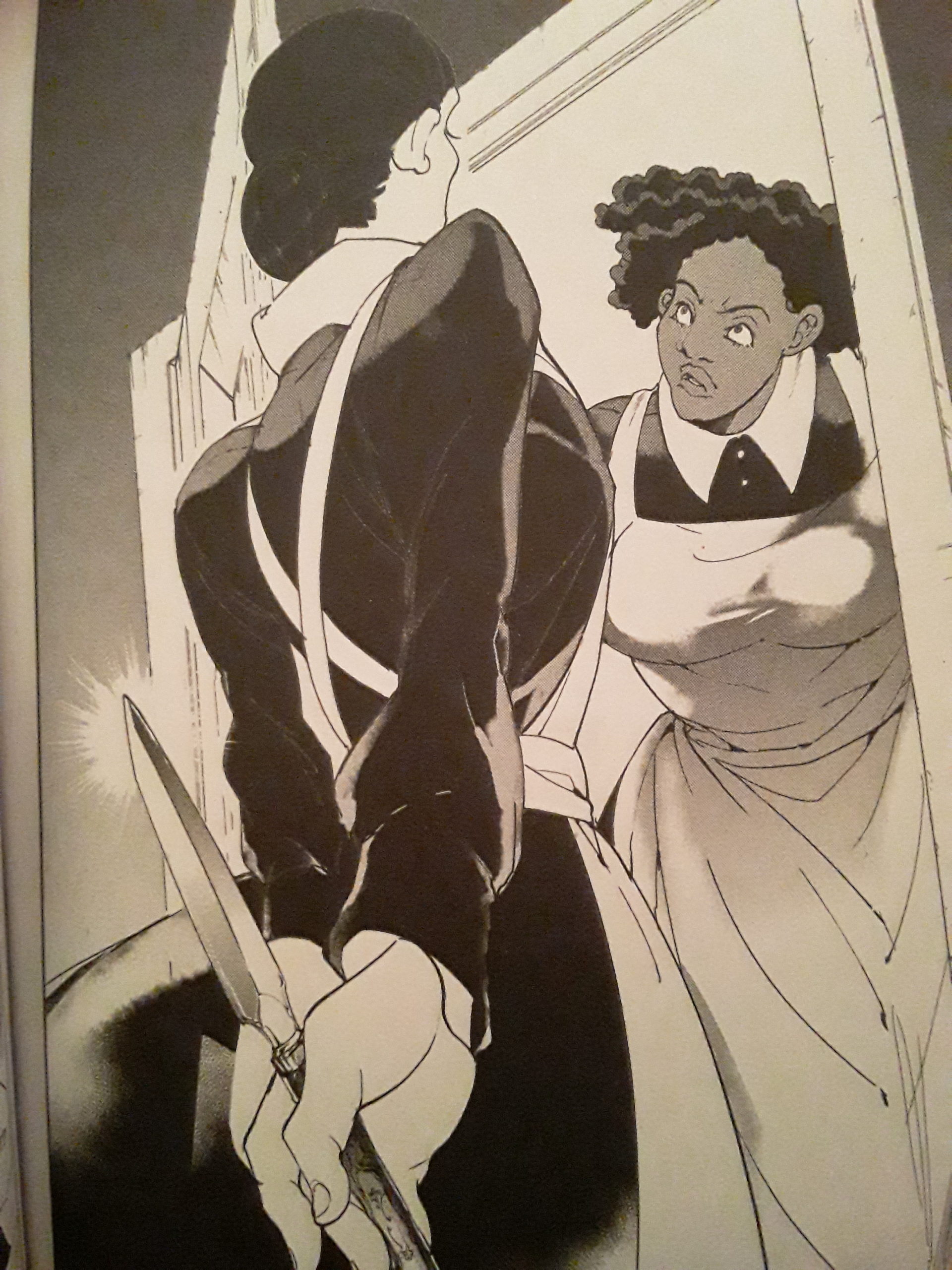 The Promised Neverland is all about suspense and tension. Readers sometimes spend pages with a single character agonizing over decisions. Despite the lack of motion, plenty is happening. Norman may be sitting on his bed for ten panels, but his mind is whirring with new revelations and future possibilities. The tension builds as he discards plan after plan. In fact, this reader found herself wondering if the author had written poor Norman into a corner.

Clandestine meetings usually reveal new information and a plethora of ways to utilize it. It can also lead to character development under the right circumstances, like when Emma decides to tell Gilda the truth about the farm. 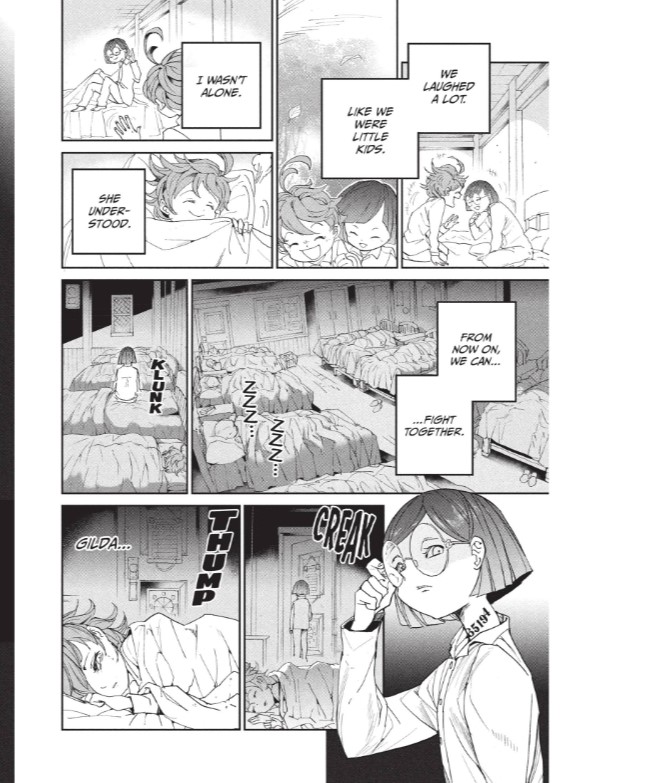 Emma’s midnight realizations about having a true friend

The pauses give readers time to process and predict the kids’ next steps. For reference, the first season of anime is twelve episodes and covers the entire escape arc. In the manga, this arc is 35 chapters long, over four collected volumes.

Unfortunately, there are times the internal monologues only act as flashbacks or needless exposition. The chapters were released sequentially in Weekly Shonen Jump, but constant reminders of the previous chapter make the collected volumes feel a bit awkward. Besides that, some characters explain things to themselves for the sake of readers, which would be fine if that fit their personality. Most of them, though, are obvious ploys for wordy explanations and forced “depth.”

In addition to the unnecessary info dumps, some readers simply may not enjoy the lack of action in these scenes. It is very intellectual for a manga about monsters eating kids, even though the OT+ rating gives more of an action vibe. The reality, though, is that this first arc involves more secret planning and less fighting killer demons (spoiler alert, that comes later).

The action that does occur is beautifully executed. In my experience, reading action-packed manga is difficult. The lack of color coupled with multiple motion lines makes it hard to determine exactly what is happening. Fight sequences could be littered with fists when, in fact, it is the movement of one person throwing multiple punches.

The Promised Neverland manages to avoid this, even though it is a shonen manga. Their scenes are rarely full of people, and the majority of fighting occurs in the mind. The individuals strategize and implement plans without lifting a hand against anyone. This limits the action, but also streamlines it. Fewer characters in a shot means fewer motion lines, and we get great sequences like this: 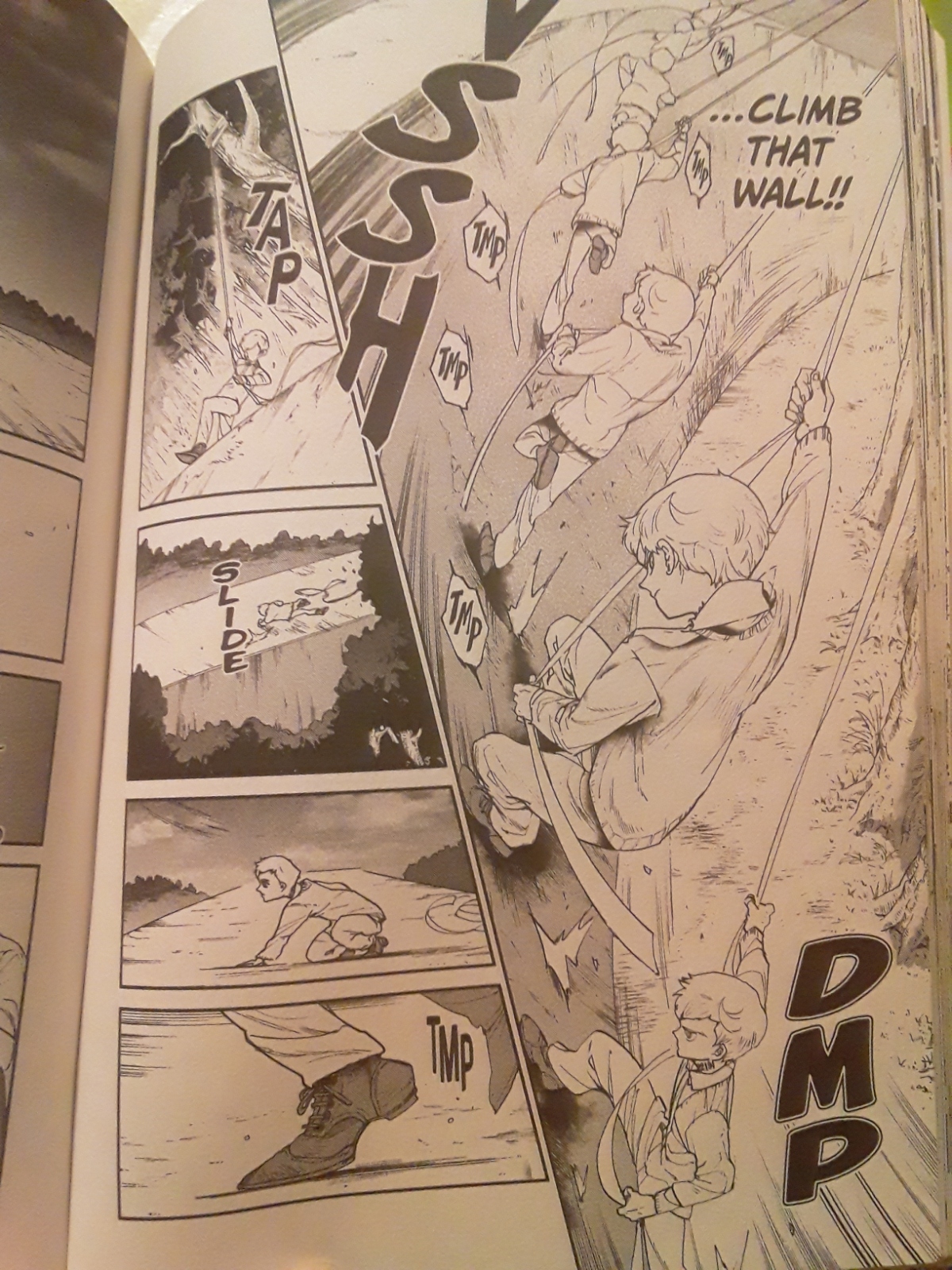 The Promised Neverland has its issues, especially in the area of character tropes and development, but there is no doubt its plot is a true gem. Manga generally hones in on teenage heroes, but the children under twelve make everything more interesting. How can a group of little kids escape the ones who taught them? Even genius children are still children, after all. The plot moves slowly, but this pace builds tension and gives the reader time to consider possible outcomes.

This manga is perfect for anyone who wants an unsettling story that keeps you guessing. For those who like a faster pace but still want to enjoy the story, The Promised Neverland anime is coming to Netflix this September. It includes all the basic elements, but progresses more quickly. You can check out our review of the first episode here.

The Promised Neverland has its issues, especially in the area of character tropes and development, but there is no doubt its plot is a true gem. It moves slowly, but this pace builds tension and gives the reader time to consider possible outcomes, perfect for anyone who wants an unsettling story that keeps you guessing. For a faster paced version of the same story, check out the anime.