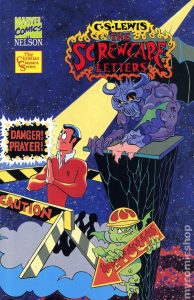 Author: Adapted by Charles E. Hall, Based on The Screwtape Letters by C.S. Lewis

From the 1970s to 1990s, Marvel Comics made a point to publish adaptations of classic literature as part of their Classics series. As an addendum to that, in participation with Thomas Nelson Publishing, Marvel Comics produced a short-lived line of religious comics called the Christian Classics Series in the mid-1990s. Among them was an adaptation of C.S. Lewis’ breakout hit The Screwtape Letters. The widely celebrated Christian classic follows two demons’ bumbling attempts to damn a man’s soul for eternity, here visualized in pulpy colorful illustrations!

Violence: None depicted or described

Sexual Content: Frank discussion of sexuality from a Christian perspective

Spiritual Content: Significant discussion of Christian metaphysics, morality, and the nature of Heaven and Hell 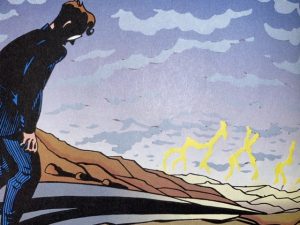 I was about as surprised as anybody else would be to find this gem! It’s strange to believe Marvel Comics at one point would release any sort of religious literature. Their superhero comics are notably agnostic on issues of faith or religion for the most part. Yet here it is. One of a handful of comic book adaptations as part of their Christian Classics Series, which was co-sponsored by the Christian publishers Thomas Nelson Publishers and Nelson Comics. The short lived ventured ended in 1994 after merely two years and six comics. Among them: In His Steps, The Life of Christ, The Pilgrim’s Progress, and C.S. Lewis’ The Screwtape Letters. It’s a shame this venture didn’t continue. It would’ve been fascinating to see adaptations of The Great Divorce or The Space Trilogy visualized with such colorful illustrations. 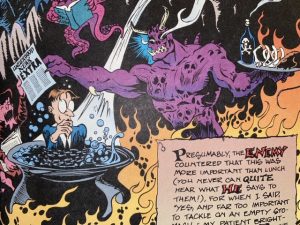 Copies of the texts are somewhat hard to come by. To date, I’ve never seen one at a used book store and pristine paperback copies of some of these graphic novels can run up as high as $50-150 depending on their quality. My used copy is an above average quality copy with some minor stains and wear and tear which set me back $30 on eBay.

If you’ve read The Screwtape Letters, you know what you’re in for. It’s one of Lewis’ most popular and retold novels for a reason. It’s been adapted into radio dramas and stage plays multiple times. It was even Lewis’ first breakout success in North America, which resulted in him being profiled in Time Magazine in 1947. 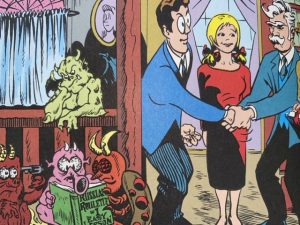 The story, for those who haven’t read it, follows a one sided correspondence between a pair of demon bureaucrats. Wormwood is implied to be a sniveling, backstabbing, and pathetic Junior Tempter who is seeking advice from his higher ranked under-secretary Uncle Screwtape. What we read in the correspondence is Screwtape’s side of the story as he explains how to turn situations that could result in a man converting to Christianity into opportunities to draw souls back to “our father’s house.” Throughout the story, we watch the the human soul go through periods of weakness, spiritual strain, repentance, and finally fully giving his heart to Christ while the two demons discuss how to best twist every development in their favor.

Lewis’s depiction of Hell is fascinating. Anyone who’s read his work can tell you he never envisioned Hell in the traditional “fire and brimstone” vision that’s been held up traditionally as a popular depiction. As we see in The Great Divorce, he sees Hell as a place where people are trapped by their own volition and suffer alone in their bitterness, rage, and egotism. In short, people stay in Hell because they can’t get past themselves. 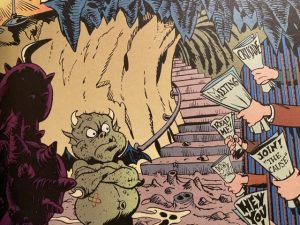 The demons in The Screwtape Letters are shown to feed in some unexplained way off of the souls of the damned, as though they merely grow strong and drunk off of the misery of the humans they ensnare. The story is a comedy, so thankfully the human character is saved and escapes the clutches of his demon tempters so we don’t have to endure the idea of being complicit of a soul being dragged to Hell.

The book has been adapted numerous times into different mediums from the radio to the stage, but Marvel Comic’s adaptation is one of the few times it’s ever been given a visual element. In truth, I would not consider this to be one of the superior versions of the story. The actual script is an abridged version of the novel, which cuts a great deal of the dialog out to hone down the story to Screwtape’s most important bits of wisdom. 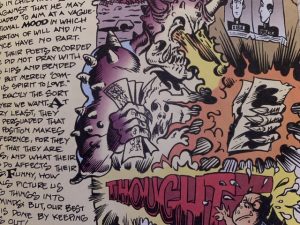 It’s not a particularly creatively laid out comic book by any means. The drawings are all laid at the margins of the writing since the book is slavishly loyal to preserving the original text of the “Letters.” As such, more than half of the page is nothing but black text on a brownish background. It’s awkwardly laid out and doesn’t draw the eye either to the images or the next text box. There were multiple times I had to search the page for the next text box or read the wrong one first because of its layout.

As a novelty, though, it’s immensely fascinating. The Screwtape Letters is my favorite book. Getting a chance to read it in a new format like this is more of a treat than a chore. 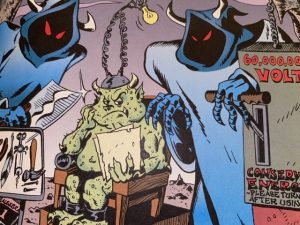 While not laid out well, the illustrator’s visions for Screwtape, Wormwood, and the other demons are fascinating, colorful, and grotesque. It’s clearly intended to be a children’s book, so the images all capture minor moments the letters imply are happening outside of the letters. They capture the uniquely comedic nature of the story as these two bumbling bureaucrats fail at the task of damnation in every way. It captures the innate appeal of getting to watch the demons squirm in the presence of the divine.

We see Wormwood depicted as a sniveling green little imp, while Screwtape is a hulking purple monster with burning eyes. Their strength visualized is a great indicator of their dynamic and relationship. Screwtape doesn’t just lord over his nephew; he enjoys the thought of destroying him should he fail and relishes the opportunity to spread Hell’s wrath any way he can, even if it’s only to his immediate family. A lot of the comedy comes just from Screwtape’s exasperation at the hands of his impotent nephew.

Even so, Lewis’ words are still haunting. The Screwtape Letters can be funny and insightful, but they’re still unsettling given the nature of what they are. We’re listening to demons attempt to steal men’s souls. We know these words have weight because these flaws in our humanity are real and WE suffer from them. All of Lewis’ most powerful reflections remain in tact throughout the adaptation. 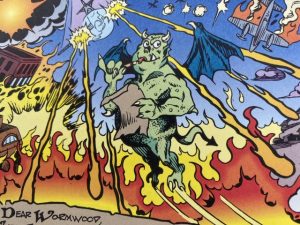 Maybe The Screwtape Letters isn’t the most ideal text to base a linear story around given the nature of its structure and how it’s told by its own terms. Making a comic about it isn’t a strong way to capture the essence of the story. This works better as a dramatic reading as was the case with Focus on the Family’s radio-drama version starring Andy Serkis. Something is lost in translation. I can’t imagine gifting this as a version of the book to someone who hasn’t read the original text. I’d sooner send them a paperback copy if I wanted to recommend it to someone. Still, I can’t argue with the results. As a chance to reread my favorite book, it was a joyful read!

To purchase a used copy of the comic book, click here.

This adaptation of The Screwtape Letters will be a fun read for fans of C.S. Lewis and his enormous body of work. For first comers, this sadly isn't the most ideal place to start.