Review: The Wheel of Time: The Eye of the World

“The Wheel of Time turns and Ages come and go, leaving memories that become legend.”

The Eye of the World kicks off Robert Jordan’s epic 14-part series, The Wheel of Time. This series is well-known in the fantasy literature world and consistently sits among many fantasy reader’s top-ten list. Robert Jordan, a former Vietnam veteran, passed away in 2007, but left a legacy that has inspired some of our modern great authors like Brandon Sanderson. Additionally, Amazon plans to create a TV series based on the books because of its immense popularity. It took over twenty years to finish this series and it is beloved by many. So, how well did the first book do? Let’s find out.

Violence: Standard fantasy violence, such as sword fighting and medieval battles. Jordan isn’t overly descriptive in his violence, unless it serves a point for the plot.

Sexual Content: Almost none. There are some characters who express a romantic interest, but that is about it.

Drug/Alcohol Use: Very little. Some of the main protagonists visit various inns throughout the story where there is some drinking and smoking, but it is very minor.

Spiritual Content: Jordan creates a world that is a pluralism of various religions. We see aspects of deism, where a creator made everything and spun it into motion in the form of the Wheel of Time, but the characters have no connection to the wheel and instead approach it distantly without any relational connection. There are western religious elements, such as prophecies of a savior, but at the same time, eastern elements find their way in by suggesting this savior has been reincarnated over and over again. Additionally, there is a militant faith group known as the Children of the Light, who use intimidation and, in some instances, aggression to achieve their goals.

Language/Crude Humor: Some swear words, such as d*** and h***, and reinvented swear words/phrases, such as “burn me!” or “blood and ashes!” One character is a well-known jokester, but he isn’t terribly crude.

Positive Themes: Self-sacrifice and doing what is right is a common theme throughout the book. We see many characters going against their instincts to help others. We see characters making hard choices and one character sacrificing himself for the protagonists, despite barely knowing them.

The Eye of the World is very much a “finally got around to it” read. I have been told by several friends that I need to read this series and I finally got around to it. I’ll be blunt, I was hesitant to start this series for two reasons: 1. I wasn’t big on the cover art (I know.. I know… don’t judge a book by its cover…) and 2. It is a daunting 14-book series, ranging between 700 to 1,000+ pages per book. However, after reading some of Sanderson’s The Stormlight Archive, I was inspired to give this series a shot. I am glad I did.

Side note: do not start this series the way I did. I started it as an audiobook, which is fine if you are reading it for the second time, but for the first time, I would definitely jump in reading it. The world is complex and the listener may miss how terms are defined if they are passively listening. The books also come with spoiler-free glossaries and maps, which are incredibly helpful. I eventually just checked out the book from my local library and had to reread different parts of the book to help clear up some confusion with the story.

As for the book itself, I was very impressed with Jordan’s characters. They start out in the village of Emond’s Field in the Kingdom of Andor. The story follows three main protagonists, Rand al’Thor, Matrim Cauthon, and Perrin Aybara, young men who are coming of age. The three  are very distinctive and definitely come with their own personalities, making them fun to read. The book primarily follows Rand’s point of view and he is certainly the central character of the three. The other characters outside of these protagonists are decent, with some fitting common fantasy tropes, such as a warrior who comes to town that is cold, quiet, tough as nails, and loyal. Sound like a familiar character type? These are not entirely bad, but unoriginal at times. 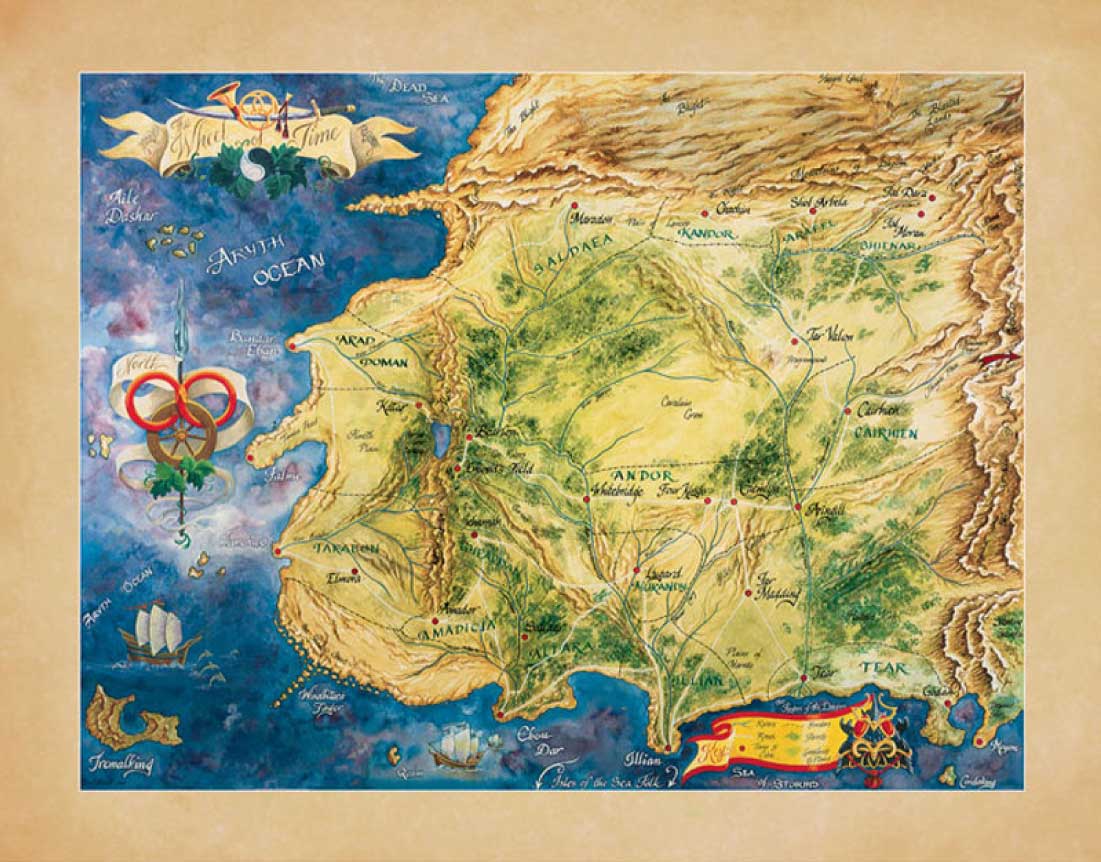 The town is preparing for the spring festival when an Aes Sedai named Moiraine and a warder named Lan come to town. Aes Sedai are basically female wizards, and warders (the warrior I mentioned earlier) are hardened warriors who are bonded to individual Aes Sedai to protect them. Their arrival creates quite the stir in the town, as many people do not trust Aes Sedai, and there are also rumors of terrible things happening in the world, creating an all-around tense atmosphere prior to the festival. I’ll leave extensive details out, but the village is attacked later that night, and Moiraine and Lan convince the three young men that the attackers were specifically after them. This kicks off the journey of our story as Moiraine and Lan tell the young men that they need to leave Emond’s Field with them. Rand, Mat, and Perrin reluctantly leave their home to find out what is going on and why they are so important in the events going on around the world.

The story from here is a lot of world building and slow journeying, which is good and bad. It reminds me of Tolkien’s Lord of the Rings, with heroes setting out on an adventure by taking a long journey. During this journey, we learn more about the Aes Sedai, who can only be female because male Aes Sedai were corrupted long ago, and we learn more about many of our characters. I always enjoy this part of any book, where our characters go on a journey and learn more about each other, but I will say… the journey in The Eye of the World moved… slowly. The dialogue was great and everything the characters discussed was fascinating, but I won’t lie, the story could have used a few faster moments. When the story did pick up, the moments were fantastic and exciting, but it was a slow build to get there.

I think if a reader does not find the world in The Wheel of Time fascinating, then the action and moments of excitement will not be enough for the reader to stay engaged. However, I think most readers will appreciate Jordan’s effort to build a world and a set of characters interesting enough to move through these slow moments. I wouldn’t call this book a page turner, but rather an engrossing read that takes time to work through and will leave the reader rewarded in the end.

Jordan created a fascinating world, but at the same time, I’m not sure I felt like he truly revolutionized the genre. I’m not even saying he has to revolutionize it, but he followed some pretty standard fantasy formulas. He certainly made the characters interesting and the magic/religious system complex, but it is still fairly standard medieval fantasy writing. This may or may not appeal to a reader. I was certainly in the mood for this type of world, but anyone looking for something truly unique may not find it here. I’ll give him points for taking the tried and true and making it strong and interesting.

I really appreciate the main protagonists, particularly Rand, because they are reluctant heroes. I think the character theme of the reluctant hero can be done really well if the character isn’t made to be “whiney,” for the lack of a better term. I felt like these characters weren’t complainers, but rather they embodied the idea of what is a reluctant hero as they just wanted to lead regular lives and not necessarily save the world. I think this is true for so many Christians. We want that nice family, good job, great church, and big house, but just like our heroes in this story who were thrust into things beyond their comfort, so often does God call us out of our comfort zones, making us reluctant heroes in God’s story. In Judges 6: 15, we see Gideon question his role in God’s plan to save Israel, proving that God will often use reluctant heroes for His purposes.

I found The Eye of the World to be a good, albeit slow, start to a great series. The characters hooked me in and the scale of Jordan’s world impressed me. The book ended on a high point as well, which made me want to read the next book right away. I know I’m late to the game in reading this series, but I’m excited to see where the series goes and what becomes of these characters I’ve already come to care about.

The Eye of the World is a strong start to a well-beloved series. The story moves slowly, but if the reader sticks with the book, then they will be rewarded with rich characters, a complex world, and a strong ending. I will certainly be reading book two, The Great Hunt.