Still the best there is at what he does 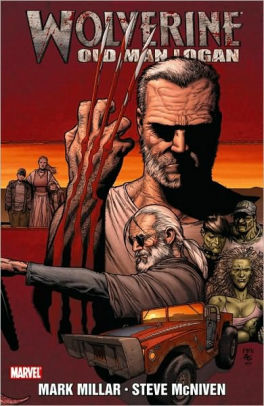 About a year-and-a-half after tearing the superhero community apart in Civil War, Mark Millar and Steve McNiven teamed up again for an eight-part saga centered on an aged Wolverine. Fans of the 2017 20th Century Fox film Logan may recall a similar story about the gray-haired berserker. Though based on Millar and McNiven’s work, the movie diverges wildly from its source material. For example, no Hulk teenagers run around the West Coast, thwomping homesteaders late on rent payment. Set in a distorted Marvel Universe, Old Man Logan presents an alternate look at a hero who is no longer a hero and a man who needs to regain his humanity. 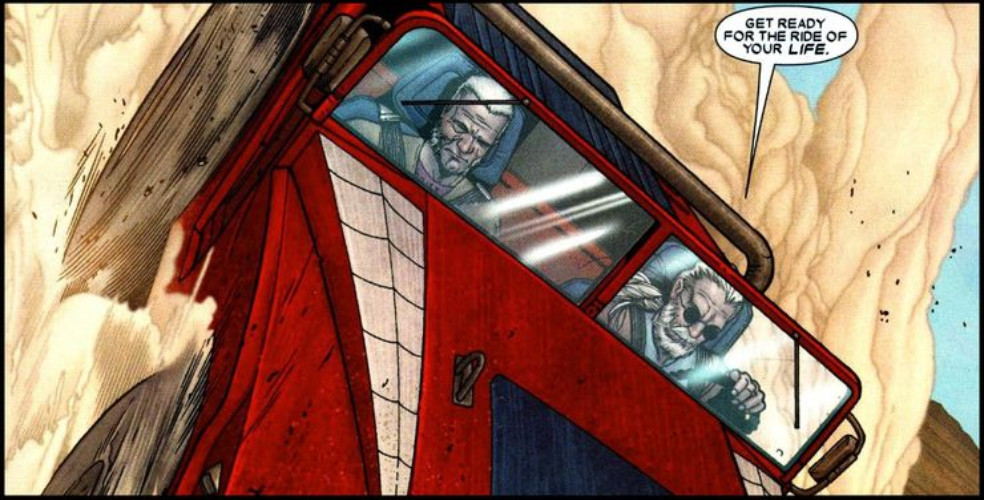 Violence: As the adage goes, Wolverine is “the best there is at what he does… and what he does isn’t very nice.” Blood gushes freely in these pages, and the body count piles high. Logan, in flashbacks and the present, liberally uses his claws to slice, stab, dismember, and eviscerate his enemies. Two scenes in particular see him cut through scores of people in multiple ways. As a result, not only do we witness acts of violence, but panels linger on dead bodies (or parts of bodies). Logan experiences his fair share of misery as well, being beaten and bruised, shot multiple times, and even eaten alive. Characters are beaten, kicked, whipped with chains, and shot full of arrows and bullets. A few men are decapitated gruesomely while two others are torn apart by dinosaurs. One person is hit by a car. Someone allows himself to be run over by a train (he survives). A character is shot in the head. A man is kicked between the legs. People are blown up.

Scary Images: Some creatures feed on the corpses of the dead. A few giant skeletons lay spread across the ground, and a pile of bones rests beneath a bridge.

Sexual Content: Someone jokingly implies that two men are in a romantic relationship. A prostitute stands on a street corner. One character implies an entire family was born from incest. Multiple women are seen in bed after an implied scene of intercourse.

Drug/Alcohol Use: Characters drink and smoke. One principal character is a former drug dealer; his ex-wife wishes their daughter had gone into his line of work for profit.

Spiritual Content: Characters kneel before Thor’s hammer to pray. People believe dead heroes will one day rise from the grave. Another character prays as he dies. Someone claims God is nowhere to be found during a dire situation. We’re told a dead family received a “good, Christian burial.” Someone thanks God.

Other Negative Content: A child betrays a parent, and a hero implies they betrayed their comrades in the past. Someone says they killed people out of boredom. A villain tricks a hero into murdering people.

Positive Content: Logan genuinely loves his family and does what he can to keep them safe; likewise, at least one member of his family stands up for him when he’s in danger. Hawkeye, though an errant parent, still helps his daughter in a moment of trouble. A character decides to return to a more heroic, helpful lifestyle. 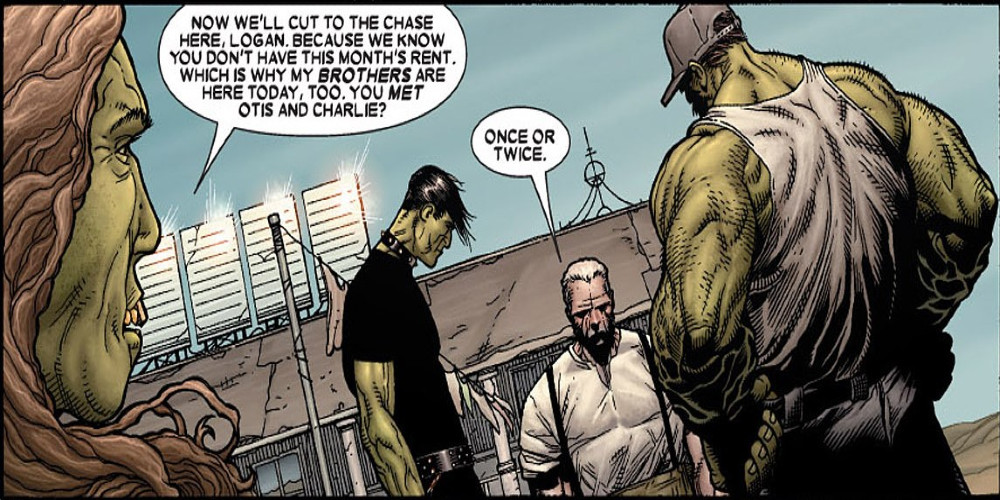 Logan represented Hugh Jackman’s final performance as Marvel’s favorite money-making mutant. Set in a quasi-futuristic world, the movie followed Wolverine as he assisted a young girl across the country with the aid of Professor X. Violent yet heartfelt, Logan allowed Jackman to (literally) cut loose in a manner denied him in prior X-Men and Wolverine films. The premises behind both the comic and the film may be intertwined, but that’s where the similarities largely end.

Immediately, the comic’s tone sets it apart from other Wolverine stories and even several X-Men films. Logan’s defining trademark is the steak knives protruding from his knuckles, and bub, he doesn’t use them for stir fry. Our hero murders many folks during his trek, culminating in a sequence of lopping, decapitating, and eviscerating. It makes you wonder how long Millar and McNiven pondered the diverse ways a human body could be split apart. Nothing is left to the imagination, in other words.

Several visceral scenes are disturbing, but as I read, I wondered: Isn’t that the point? An earlier scene in the story, perhaps its second most gruesome, is intended to horrify. Millar does this for two reasons. First, a younger Wolverine violently dispatches several enemies to protect a school full of children. Second, as the reader comes to realize, not all is at it seems. A final revelation turns the sequence on its head, putting Wolverine’s actions in a new, darker light. Writers like Chris Claremont often depicted Wolverine as a warrior or samurai, someone who may be violent but is not without honor. Millar’s revelation removes any nobility left in Wolverine’s destructive slog. 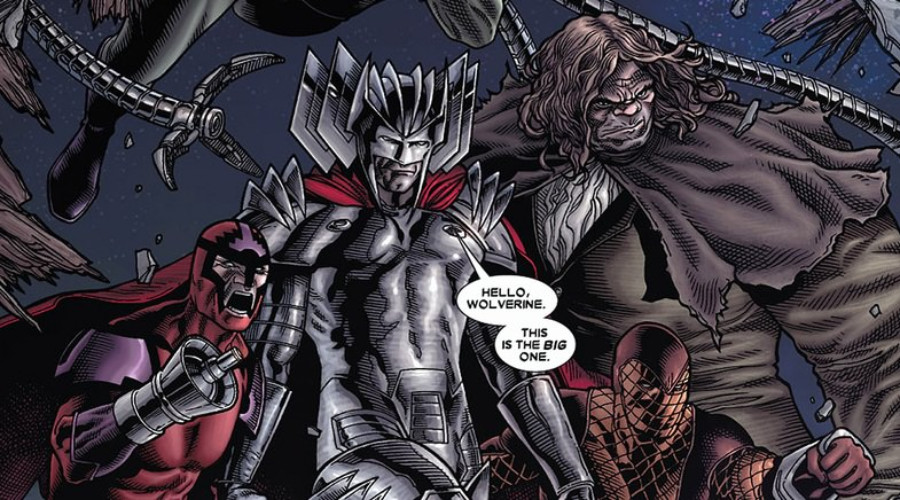 Wolverine’s actions destroy him internally, allowing Millar the chance to explore the character’s attachment to violence. Logan, in a sense, experiences a “dark night of the soul.” In the wake of his actions, Logan is broken, removing a long-standing purpose in his life and leaving him nomadic. Flashback sequences see him wandering the countryside, beaten and sobbing. Though brief, these moments are powerful, and while they don’t excuse the bloody violence, they at least give it purpose. Suddenly, Wolverine isn’t just a brutal killer. He’s a man who’s made a horribly tragic mistake, one he can never take back. Thus, Millar injects bittersweet humanity into Logan’s adamantium bones.

Contrast this idea with a later issue where a character take brutal revenge on several opponents. Millar and McNiven dedicate an entire issue to this swath of devastation as enemies meet increasingly gory ends. Suddenly, the creative duo can no longer justify the violence. These sequences are arguably more disturbing, not just for the content but for their meaning. This character cannot fall back on “honor” or “nobility” to explain their actions. They murder for the sake of hatred, deal death for the sake of fulfilling explosive rage. You can argue that the sequence is creative, that Millar and McNiven take great pride in unleashing such diverse deaths upon their story’s baddies. You could even argue this issue simply follows the same conceit as so many other narratives, indulging in that classic premise known as “vengeance.” Yet any way you slice it (no pun intended), these later scenes feel much darker.

Fortunately, Millar and McNiven’s story goes beyond blood-spattered, gore-encrusted panels. The beauty of alternate timelines is that a writer can take previously established concepts and play with them as they see fit, asking questions that cannot be asked in a mainstream series. It’s how you get stories like Kingdom Come, The Dark Knight Returns, Superman: Red Son (another Millar creation), Days of Future Past, or Marvel 1602. “What does the Marvel Universe look like when most of its heroes are gone?” Millar and McNiven ask in Old Man Logan. 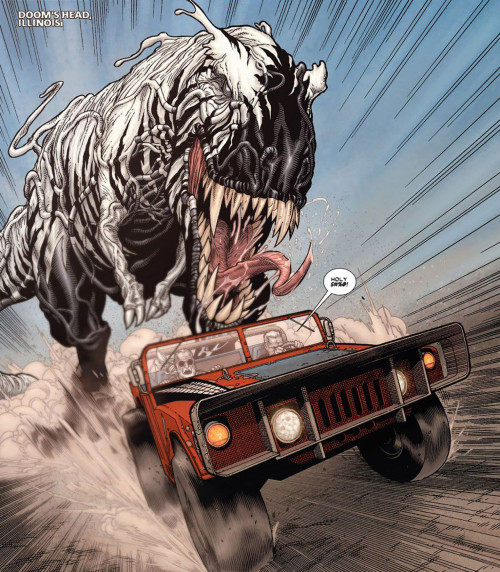 The answer: a fairly bleak world, but certainly not one lacking creativity. Millar and McNiven revel in creating a possible future world almost as much as they enjoy painting it with buckets of red. Former Avenger Hawkeye is still an amazing archer but now has to contend with being blind. The Red Skull lords over America from the White House, gazing upon his personal collection of trophies, including Captain America’s shield. People seek hope by praying to an ancient heroic artifact, Thor’s hammer Mjolnir. Men taking after Ghost Rider zip around as almost Mad Max-style biker gangs. Alternate versions of Emma Frost, the Inhuman Black Bolt, the Venom symbiote, Daredevil, and the Kingpin appear.

Millar and McNiven’s world is inventive, and fans of Marvel’s comics will certainly enjoy the range of characters and Easter eggs that enter the narrative. Additionally, several of these references and character appearances serve the main plot; having Black Bolt or the Kingpin show up at specific moments feels purposeful. No character is thrown in just for fun, no reference to outside continuity is made just for comic readers to smile at. Each creative decision feels intentional. 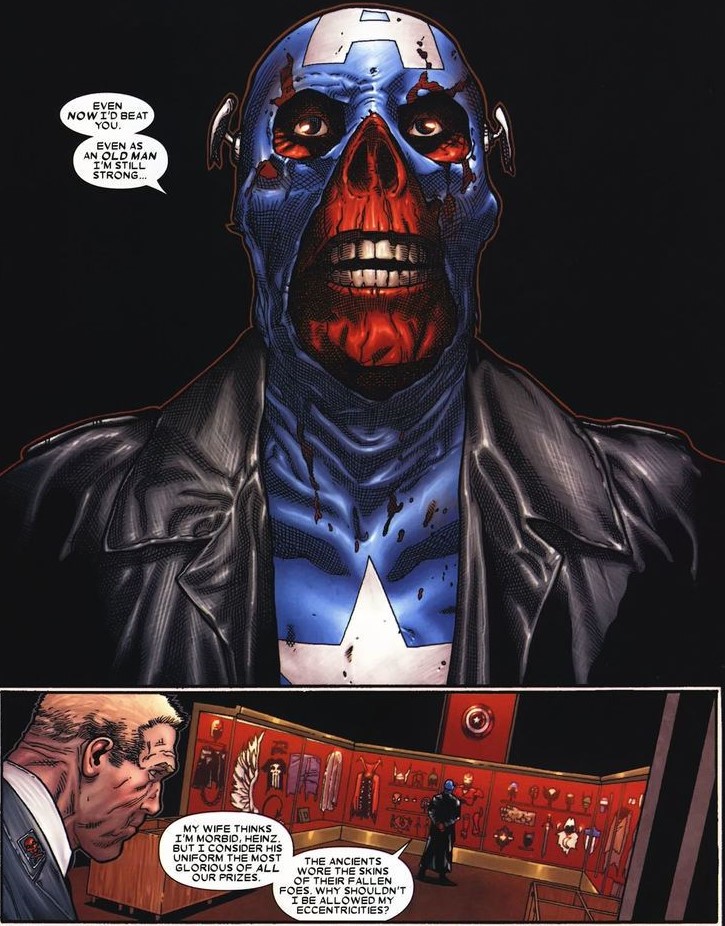 Just as Millar and McNiven’s world runneth over with imagination, it also contains beautiful hints of hope. You’d think, with the dystopian setting and gratuitous violence, hope would be a difficult commodity to come by. It is. I believe that’s intentional, similar to how Millar and McNiven handle the violence and Easter eggs. Over the course of the series, we watch a broken, defeated Logan slowly discover identity and meaning again. Villains may run the country, but we see characters stand against them. Heroes like Spider-Man and the Avengers may have been wiped out, but hints of resistance exist in this dark world. Moments of hope are sparse, but like McNiven’s depiction of a beaten Wolverine, they work as powerful reminders. The world as Logan once knew it is gone. There’s no going back. The only option is to move forward. Therein lies the hope of a brighter future.

But is it worth it? you may ask. Should I go through pages of blood and gore just to be told that hope still exists? There are certainly more wholesome avenues for discovering hope – Scripture being one of the key sources – but I would be hard-pressed to discredit Old Man Logan on the basis of its bloody backdrop. As stated earlier, Millar and McNiven give narrative reasons for the violence. Occasionally, “shock value” is one of those reasons, blood for the sake of blood. McNiven’s art, though gorgeously detailed, can feel a bit too real. Other times, the violence carries a point: transformation. Logan doesn’t just fight any old human he comes across. He fights villains, wicked embodiments of a world gone wrong. “Logan, the noble warrior” lurks beneath the bruised surface of “Logan, the fallen hero.” 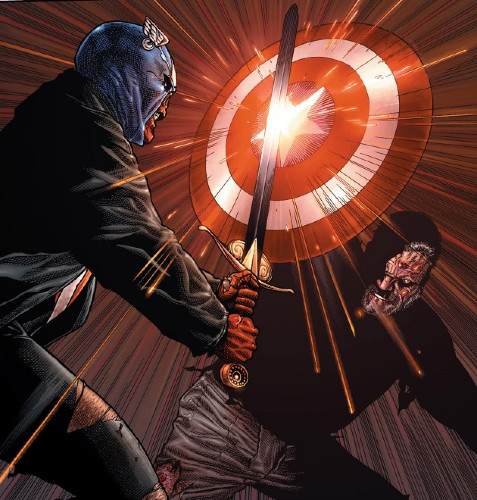 So is it worth it? That depends. If you’re looking for a hopeful story, you’ll have to contend with a bit of a slog to get to those final, fruitful pages. Strip away the violence, however, and you still find an engaging narrative. Millar and McNiven craft an intriguing story around a legendary character that doesn’t solely rely on him using those steak knives. Maybe the story isn’t always pleasant, but it’s not hopeless either. Triumph exists at the end. A character who was once thought thoroughly destroyed finds hope and purpose in a dark world. Remove the dirt-digging Moloids, green-skinned Hulk children, and blind Jeremy Renner, and you discover a surprisingly relatable narrative. Enough clever material exists in each issue to hold your attention even if you’re not overly fond of Wolverine’s pig stickers. Millar’s version of the character may not be Christ Claremont’s Logan, but this adamantium-infused old timer is still a fascinating individual to follow.