(This post contains many spoilers on the fairly recent game Celeste. Do not read if it’s one you intend to play blind. Check out the GUG review here!)

In a world where society decries the artistic and relatable value of video games, there’s a little puzzle platformer called Celeste. In it you play as Madeline – a girl who’s decided to climb a mystic and challenging mountain to prove something to herself. There are spikes, falling platforms, and strange physics to conquer, but the mountain brings out more than just material obstacles to overcome.

Madeline suffers panic attacks and sometimes near crippling self-doubt. She hates this side of her – even more so when it takes physical form as a dark and red-eyed version of herself. This other self is antagonistic and critical at every turn but tells Madeline repeatedly she knows what’s best for her.

I, too, have experienced panic attacks and apathy born of self-doubt and self-disrespect. Much of what Celeste’s developer, Matt Thorson, describes of this mental battle is fairly spot on to what I experienced. Your defense mechanisms go on high alert and aggressively assure 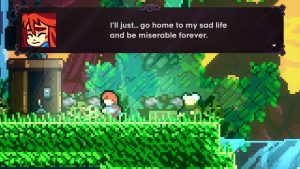 you that staying down and refusing to care are the only ways to protect your soul.

Through the game Madeline must learn that ignoring or attempting to remove this “Part of Her” does not answer the core issue. Her struggles and fears shape her just as much as her triumphs and strengths do, and accepting the whole Madeline paves the way to her ultimate success.

As a Christian, I thought – and still sometimes think – it was my job to get rid of my garbage, to be strong and “with it” so I could be best used for Christ’s kingdom. When my own “Badeline” (as I’ve heard her coined) showed up with insecurities, fears, and unknowns, I would shut the door on her and stuff her down for as long as possible, until my continued uncertainty and struggle brought her raging to the forefront.

When Jesus said, “Come to me, all you who are weary and heavy-burdened, and I will give you rest” (Matthew 11:28), what do I think he meant? There’s a Part of Me (and maybe a Part of You) that seems so wrong and shameful to present to Christ. He means rest for all who were strong to begin with, right? The ones who have it together and just need a breather?

But who really has it together? When Celeste was speed-ran for charity, countless donations poured in from players who remarked how meaningful the game had been to them in a dark and difficult point of their life. “Badelines” seem common among the human race, and if I present a white washed, come-to-Jesus-when-you-deserve-him attitude to the people who need him most, wouldn’t that show them a God of conditional love?

The fable of Celeste is to learn to love yourself and accept all parts of you, to work with your perceived flaws instead of against them. There’s a disconnect these days between our need to over affirm ourselves and an urge toward absolute self loathing. Even while 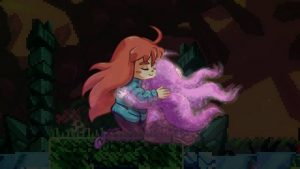 Madeline battles her inner (now outer) demons, she doggedly pursues the peak of Celeste Mountain. She wants to be worth that achievement.

I may not be the perfect messenger, but wherever you are in your climb, know  there is a God who already loves all Parts of You, even when you don’t, and He is for you even when you think the peak is impossible to reach. It’s important to realize your intrinsic value. I won’t deny that. But maybe realizing your value comes from a detail-oriented Creator will help when your own failure to achieve makes you question your purpose in this world.

At the end of Celeste, when Madeline has accomplished her goal and celebrates by baking a strawberry pie, her other self makes a final little jab and says she’s never been a good cook. Madeline replies with, “You also said I wasn’t a mountain climber.” In issues of mental health, it’s important to remind ourselves of the truth. Even when you fall to the bottom of the mountain, there is a God of the valleys, and He values you and knows He’s created what is good.