Bloodied and battered, Matt Murdock, aka Daredevil, is in rough shape at the start of season 3. According to him, God has destroyed everything he has ever cared about. It is to this point, that he compares himself to the Biblical character Job. It is Matt Murdock’s belief that he has been nothing but a loyal 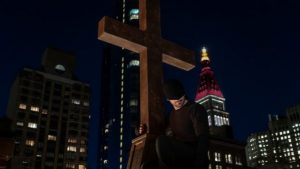 servant to God and in return was given nothing but torment. Job has a complicated, but similar story. God allows Satan to test Job, God’s most faithful servant, who seems to have everything he could hope for. Satan literally strips him of everything he holds dear in the most tormenting ways imaginable. According to Murdock, the difference between him and Job, is  Job is a p***y. He is weak and unable find the courage to curse God. It is Murdock’s belief that Job would have been better off listening to his friends, cursing God, and fixing the issues in his life himself. this idea seems to run rampant among church goers today. We tend wait until something doesn’t go our way, pray about it, and when it still doesn’t go our way, we decide to fix it on our own. It isn’t weakness to follow God even when what happens to you doesn’t make sense, when everything around you seems to be falling apart. On the contrary, it tends to take more strength and courage than the common Christian is able to muster.

In the first chapter of Philippians we find the Apostle Paul in a Roman prison. It’s not exactly a place one would hope their faith would take them. The easy thing for Paul to do would be to give up, to complain about his situation, and to curse God. Paul not only refrains from doing so, but he takes his terrible situation and figures out how he can use it to serve God even more. He begins to evangelize to the guards. The church hears of his steadfastness and find courage themselves, and the kingdom of heaven continues to advance. Paul is awesome. The guards threaten to kill him and he rejoices because it would mean he gets heaven, they threaten to keep him in prison and he rejoices because he gets to share the Gospel. It takes strength to take a bad situation and decide to serve God through it at all costs and hold to what God can do through you, rather than what has happened to you.

Another misunderstanding the Devil of Hell’s Kitchen seems to have is the thought that he is deserving because of his serving. He feels entitled, as if he has worked hard enough for life to not happen to him. The Bible says every good deed is but filthy rags to God. There is nothing we can do that makes us deserving of Heaven. It sounds dreary but it’s actually the best news we can receive. God’s standard is too high for us to work towards. It’s why we have Jesus, who sacrifices himself for us and says “Through me you are now made new.” We are perfect and blameless in God’s eyes because of Jesus. Having faith in Jesus is all it takes and having faith brings about our servant-hood. It’s a serving out of love for God and what He has done. It’s not a serving out of fear of not being good enough.

Jesus says there will always be trials in this world. Having faith in the midst of those trials, having the courage to glorify God in those trials, takes real strength. Job was not weak for believing in God while his world fell before him. In the end, because of his strength, God delivered him back his blessing twofold. Matt Murdock on the other hand, as shown in the rest of the episode, needs to learn to get back up, keep fighting and find his strength.

YouTuber, Geek and most importantly Christian. You can always find me at www.YouTube.com/ArmourCody giving you the news, or on Twitter @CodyArmour