Have you had questions about the Bible that have stumped you? Are there verses that make absolutely no sense to you, and on top of that, you’ve never heard anyone preach/speak on before? Was there just some concept you were reading about in your bible that had you scratching your head even after you looked it up?

I personally am not a theologian, nor do I claim to have all the answers, but I do love reading, studying, and listening to God’s word. When I first gave my life to Christ, I immediately grabbed my bible (which I had never read before) and started devouring every page. I didn’t read the entire book, but came pretty close. I read through the entire New Testament and some books of the Old Testament. I continue to read and learn more and more every day.

Yet, the more I read, I find verses that are just…odd. Not only are they confusing, but I’m not sure what to make of them or how God wants to apply them to my life. I know I’m not the only one, so I decided to poke the minds of our fellow geeks over at our Facebook Group and see what they had to say!

I will not post the names of those who asked these questions for privacy, and I will also make my answers short and sweet with scripture to back my opinion. Again, these answers are coming from someone who has studied the Bible for years, but I am not certified in any way by an institution to be an interpreter of scripture. My interpreter is the Holy Spirit, and that’s enough for me. 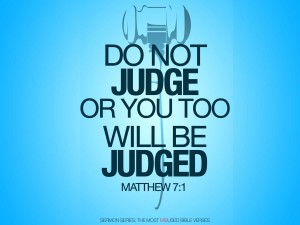 1. Can Christians Judge Others?

Yes, we can. In fact, we are expected to judge sin when we see it, but Christ is looking at our heart and intentions as to why we are judging. Let me explain by highlighting the verse that everyone loves to use about judging others:

Of course, it clearly says not to judge others, in fact, the sub-heading in these verses is “Do Not Judge Others”. Yet, that is pretty confusing, because if you continue to read, Christ explains to us that we are to judge only after we have judged ourselves and dealt with our sin.

In verse 5, you see Jesus says we are to deal with the speck in your friend’s eye only after we handle the log (the huge area of sin that we are dealing with) in our own life.

So for example, let’s say you deal with gossiping or lying. You are chatting with a friend who starts gossiping about someone they know, and you are quick to tell them, “You know, you shouldn’t be gossiping about that person.” But you are the same person who will call someone up and tell them the latest news on someone else’s business!

Judge sin privately when you are speaking with someone. If you wish to confront someone and guide them to forgiveness and freedom from what they are dealing with, make sure you have that under wraps in your own life before you even say two words to them. If you are still struggling with that issue, then go to the scriptures and see what God has to say about it, so you can receive freedom yourself in Jesus’ name. 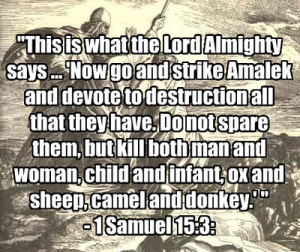 2. Why did God tell the Israelites to go and kill certain groups of people in the Old Testament?

I myself have asked this question, and the Holy Spirit has given me an answer. You may not like the answer, but I believe this was from God and I will share it after I give you the answer that comes from scripture:

2 This is what the Lord of Heaven’s Armies has declared: I have decided to settle accounts with the nation of Amalek for opposing Israel when they came from Egypt. 3 Now go and completely destroy the entire Amalekite nation—men, women, children, babies, cattle, sheep, goats, camels, and donkeys.”

16 In those towns that the Lord your God is giving you as a special possession, destroy every living thing. 17 You must completely destroy the Hittites, Amorites, Canaanites, Perizzites, Hivites, and Jebusites, just as the Lord your God has commanded you. 18 This will prevent the people of the land from teaching you to imitate their detestable customs in the worship of their gods, which would cause you to sin deeply against the Lord your God.

These are two of the toughest sections of the Bible to understand. Why would a loving God who is literally the embodiment of love (1 John 4:8) want to kill an entire tribe of people, including women, children and animals? The answer that the Bible gives in Deuteronomy 20:18 may not be enough for some. God explains if these people are not destroyed, their customs to worship other gods that are not the true God, Jehovah, will cause them to sin against God which will lead them to stray from Him, which in turn will rain destruction down upon them.

The reason why God sent King Saul in 1 Samuel to destroy the Amalekites is that they would become a threat to Israel in the future. If you’ve never seen the movie One Night With The King, you need to check it out. It explains this situation very well. Basically, because of King Saul’s disobedience to the Prophet Samuel, four hundred Amalekites survived and one of those who was a descendant of Agag the king, Haman, who almost wiped out all of Israel if it weren’t for Esther (see book of Esther).

What did the Holy Spirit share with me about these verses? God will protect His children from anyone who dares to attack them. Israel, in the Old Testament, was the entire family of God (Christians today) in one group. So if the people of Israel were to be wiped out, Christ could have never been born, thus ending the chance for salvation for the entire human race! Yes, it’s cruel, but God is a Father who defends His children from anyone, including entire groups of people who wish to destroy His people. 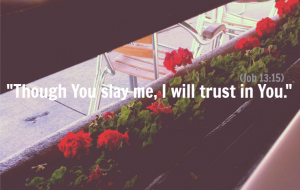 3. Why did God allow the suffering of Job?

This question is difficult to answer, and to be honest, I don’t believe I will present the answer you are looking for. The easy answer, of course, would be that God doesn’t allow suffering, and it was all just a mistake with Job. That would not be true, because we can all testify to suffering we have here in our lives. I will show you what the Bible says about this, but the truth may not be what you want to hear:

The short story of the book of Job is that he was a man who loved God with all his heart. He gave the proper offerings for his sin and even his family’s sin (Job 1:5) just in case! So basically, he was a little overly paranoid about sin and refused to be on God’s bad side.

Satan decided to enter Heaven, hiding among other angels (Job 1:6-7), and offered God a bet that Job would turn on Him if He allowed Satan to mess up his life without taking it. God said yes, and Satan wreaked havoc on Job through situations like the death of his children, wife, the destruction of his home and becoming very sick. He didn’t curse God, instead, Job wanted an answer as to why this was happening to him. In Job 13, Job is preparing to argue his “case” before God, and you can see in verse 15 he is not even afraid if God kills him as long as he gets the answer.

The book of Job is pretty long and full of conversations between Job and God. It boils down to Job trying to debate God about how great of a servant he is to Him, while God explains to Job that yes, he is a great servant, but he still cannot fathom the depth and infinite wisdom and power of the Almighty.

Why did God allow this suffering? My personal opinion is that Job was trying to be so self-righteous in doing everything correctly he lost sight of who God really is: our Heavenly Father. It’s not just about following all the rules, but having a close and intimate relationship with Him which I believe Job was able to experience (Job 42:5). Job was also given back everything he once had (Job 42:10) after he prayed for his friends who tried to convince him that God was a liar and wouldn’t save him (Job 42:7).

At the end of it all, I cannot say why God pulled down His hedge of protection over Job just to test his faith and prove that he would continue to serve Him. It honestly doesn’t seem fair, but in the end, we see that Job was surrounded by people who hated God (His wife and friends. See Job 2:9.), and I feel that God wanted to pull out all that misunderstanding he had about Him. It was a difficult time, but it also showed me that many occasions where “bad things happen” it is often the Devil behind the acts. Though it seems like “bad luck” or you’re having a bad day (or year), it’s actually the demonic forces at work in our lives.

Well, that’s the end of part one of this series of Q&A. I enjoyed writing it, and I hope you enjoyed reading it! It was challenging for me to seek God through study, reading His word and prayer to find these answers. Again, some are not what you are looking for, so I encourage you to read His Word and find out the answers for yourself. Don’t just jump on a random website and read someone’s opinion, read the original source material.

Were the answers what you were looking for? Did God speak to you through anything that you read above? What other questions you would like answered that have stumped you?