Dinosaurs and the Bible 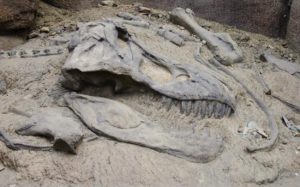 “65 million years ago dinosaurs roamed the earth”. Many museum displays, documentaries, and even fictional stories contain this or similar statements about how old dinosaurs are. Some movies like “The Good Dinosaur” present dinosaurs and humans as coexisting, but most imply that dinosaurs went extinct long before humans came into the picture. There are countless theories about dinosaurs and the age of the earth, but theories are all they are. We can never know exactly what they looked like or how they lived because we were not there. However, as Christians, we might be able to get some clues about these great creatures by looking at scripture.

The beginning is always a good place to start. Looking at Genesis 1:1 we see that “God created the heavens and the earth”. Looking at verses 20-25 we see the account of the fifth and sixth day, when God created all creatures that filled the air, the sea, and the land. These creatures would have included dinosaurs. Secular scientists have fought hard against creation in an attempt provide a naturalistic explanation for the world that excludes a divine creator. As Christians we are not bound to the need for naturalistic explanations and should not be afraid to let the supernatural influence our ideas of creation and history. Even secular science cannot avoid evidence that points to the biblical account, as can be seen in studies such as this which indicate that 90% of all creatures appeared at about the same time.

The best known example of a possible dinosaur in the Bible is found in Job 40:15-24. God challenges Job to teach him humility and begins describing a creature referred to as a Behemoth. Several living animals have been presented as an explanation for this magnificent creature, such as an elephant or a hippo, but upon further investigation none of these creatures match the description that God gives. A mythical creature has also been suggested, but God is using the behemoth as an example of his power. To use a mythical creature would be a weak example and imply that his greatness was merely mythical since he did not in reality create such a creature. The behemoth must have been something that really existed and that Job was familiar with.

The description of the creature shows us it was vegetarian, even though it was incredibly large. Its limbs were incredibly powerful including it’s thick tail. It lived near rivers, but the strong currents, even of flood waters, did not bother it. It could not be domesticated. Hippos, elephants, and rhinoceroses, all of which are large and strong and eat vegetation, do not have strong tails like trees. The best explanation is a creature that is no longer alive and the description brings to mind a dinosaur.

If we read on in the very next chapter of Job we find a description of the Leviathan. The most commonly suggested identification of this creature is an alligator, but the description in Job seems to paint a picture of a far more powerful animal. It was a creature with scales no known weapon could pierce. It could survive on both land and water and somehow had fire and smoke that came from it’s mouth. Bombardier beetles shoot boiling chemicals from their abdomen and we know of creatures that can create electric currents, so it is not out of the question that one of God’s extinct creatures could produce something resembling flames or smoke. Mention of the Leviathan creature can also be found in Psalm 104:26.

We should not be surprised that creatures such as dinosaurs have gone extinct. Adam and Eve’s sin put a curse on the earth and allowed death to enter where there had previously only been life. Most of creation was wiped out in the flood in Genesis 7 but the ark had ample room for at least 2 of every kind of creature, especially if the pairs Noah took on the ark were juvenile and not fully grown. The post flood world would have offered a myriad of difficulties for large creatures like dinosaurs including climate change and a smaller supply of food, which all could have contributed to their extinction.

Romans 8:20-22 says “Against its will, all creation was subjected to God’s curse. But with eager hope, the creation looks forward to the day when it will join God’s children in glorious freedom from death and decay. For we know that all creation has been groaning as in the pains of childbirth right up to the present time.” Because of the curse, animals go extinct, and dinosaurs are some of those creatures, but this is further evidence they existed with humans. Humans brought the curse on earth and the curse is what brought death into creation.

I am not a biologist and am not here to make an argument for the age of the earth. I’m simply a Christian who wants to look at the Bible literally and learn what God is teaching. Whether it was millions or thousands of years ago, God created dinosaurs for the same reason he created everything else: to bring glory to himself. The characters in Jurassic Park learned a similar lesson when they came face to face with a creation that they could not control. Ellie says “You never had control! That’s the illusion!” because she was forced to recognize the humility of humans against nature. God is more powerful than nature. The power and might of dinosaurs is a testimony to what he can accomplish. Our response should be the same as Job’s when he was confronted with the amazing power and beauty of creation in comparison to his small role in it “I know that you can do anything, and no one can stop you.” (Job 42:2)