Geeking About the Psalms: Psalm 13

1, How long, O LORD? Will You forget me forever? How long will You hide Your face from me?

2, How long must I take counsel in my soul and have sorrow in my heart all the day? How long shall my enemy be exalted over me?

3, Consider and answer me, O LORD my God; light up my eyes, lest I sleep the sleep of death,

4, lest my enemy say, “I have prevailed over him,” lest my foes rejoice because I am shaken.

5, But I have trusted in Your steadfast love; my heart shall rejoice in Your salvation.

6, I will sing to the LORD, because He has dealt bountifully with me.

This psalm formulates a staircase pattern indicative in the psalms, starting at a lower point leading up to a bigger point. In this case, David is in despair, but the Lord is gracious in his despair. Four times David says, “How long?” Each “how long” is in relation to God, to himself, and to his enemies. This despair David is experiencing is something we all can relate to. Think of times in your own life when you’ve said, “God, how long will You forget about me?” Or, “How long will I continue to feel this way?” Or, “How long will my enemies continue to press against me?”

David feels as if God has forgotten about him. Have you ever felt like God has forgotten about you? I know I have. Sometimes we suffer experiences of feeling God is indifferent towards our suffering and that He has forgotten us. Nothing could be further from the truth, which we will see at the end of the psalm. There’s nothing inherently wrong with feeling this way. We’re sinners, so we’re bound to distrust God and misunderstand who He really is. What’s wrong is when we live in this perpetual condition of distrusting God. That’s not the relationship God has intended to have with us.

As Christians, Jesus has restored our relationship to God—this is called reconciliation. “Therefore, if anyone is in Christ, he is a new creation. The old has passed; behold, the new has come. All this is from God, who through Christ reconciled us to Himself and gave us the ministry of reconciliation; that is, in Christ God was reconciling the world to Himself, not counting their trespasses against them, and entrusting to us the message of reconciliation” (2 Corinthians 5:17-19).

Here, David is desperate to be heard by God. “Light up my eyes” tells us David is afraid to go to sleep. It’s likely he wrote this when Saul was pursuing his life for several years. In this psalm, David was so afraid for his life that he was afraid to sleep. In verse four, David was so certain that if he died, people would see his death as God’s judgement on him. David feared for his life because he was surrounded by his enemies—likely Saul’s army. Even though I was in the military, I was fortunate enough to have never feared for my life. Yet I, and I’m sure many of you can relate, have felt as if everything was against me.

I suffered with depression for most of my teenage years. I was clinically depressed throughout all of middle school and most of high school until I was seventeen. For those who suffer clinical depression, they all experience it differently. For me, I felt as if everything—even God Himself—was conspiring against me. I hated God. I was convinced He was this cunning Being who liked to toy with certain people and make them suffer. Maybe you’ve felt the same once, or maybe you’re feeling it now, but in the last two verses we find out something completely different.

David suddenly realizes his situation depends not on his enemies or himself, but God. On this psalm, Derek Kidner writes David “turns his attention not to the quality of his faith but to its object and its outcome” (Kidner, 95). When you’ve talked to a fellow Christian about problems you’re having, have they ever told you, “Just have more faith”? This is terrible advice! The quality of faith is not what matters. Let’s examine Luke 17:1-6:

And [Jesus] said to His disciples, “Temptations to sin are sure to come, but woe to the one through whom they come! It would be better for him if a millstone were hung around his neck and he were cast into the sea than that he should cause one of these little ones to sin. Pay attention to yourselves! If your brother sins, rebuke him, and if he repents, forgive him, and if he sins against you seven times in a day, and turns to you seven times, saying, ‘I repent,’ you must forgive him.” The apostles said to the Lord, “Increase our faith!” And the Lord said, “If you had faith like a grain of mustard seed, you could say to this mulberry tree, ‘Be uprooted and planted in the sea,’ and it would obey you.” 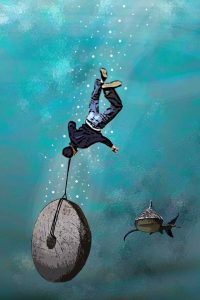 At this point in Luke, Jesus is talking about the effect sin has on our lives. He was talking about the severity of causing someone to sin, especially causing infants to sin. Jesus takes it so seriously He says it would be better for one to be cast into the sea with a millstone around his neck.

The image on the right portrays what Jesus is talking about. Imagine being cast into the sea with that thing around your neck. Obviously, Jesus takes the issue of causing others to sin seriously, and rightly so. Who hasn’t caused another person to sin? I’m certainly guilty of this.

The disciples recognized their guilt, too. So in response to this recognition of their sinfulness, they asked Jesus to give them more faith so they’d be able to do the things Jesus told them to do. So, what does Jesus do? Does He lay His hands on them and give them “mountain moving faith”? No, He doesn’t. Instead, He says even faith as small as a mustard seed is enough. If you saw the featured image for this article, that seed being held in the person’s finger is a mustard seed. Even faith that small is enough for God to do His work.

The size of faith doesn’t matter because God is the one doing the work through faith. This is what Jesus meant when he said, “Have faith in God. Truly, I say to you, whoever says to this mountain, ‘Be taken up and thrown into the sea,’ and does not doubt in his heart, but believes that what he says will come to pass, it will be done for him” (Mark 11:22-23). Faith is something God does for you. It’s never something we do; it’s always God in action.

Think of faith as a key to opening a door that brings God into our lives. God gives us that key of faith; it’s a gift (Ephesians 2:8-9). Does it matter if you have a bigger key ring? No, it does not; all you need is that one small key, and God gives it to us. He opens the door to faith for us with that one small key we can always use, and He is the one who moves the mountains for us.

David merely trusted in God—he had faith God would sustain him, and He did. This wasn’t because of anything David had done, but merely because David trusted in God’s good and gracious will. David’s heart rejoices in God’s salvation because He saved him—because the only plausible response to God’s gracious act was to praise Him. Just as God has saved us from the grip of the Devil and sin, so our only plausible response is to sing praises unto God.

Father, I am finding it difficult to trust You right now. I am trying, but it is difficult. I believe; help my unbelief! I know You are good and gracious. Help me to trust in this. [Feel free to be specific with God about your problems. Lay out your troubles before Him.] These things cause me grief and they seem greater than You are. Therefore, I surrender myself to You. I know not how You will work, but I trust You will do what’s best, for You are my Creator and know all that is best for me. I know not how You will deliver me; all I know is Your promise to be with me. Amen.

Garrick Sinclair "Ricky" Beckett first started his Christian writing on a blog titled "The Lutheran Column" where he hires proficient Lutheran writers to convey biblical truth. Along with the blog, he also writes poetry, string quartets in music composition, enjoys doing photography, reading, and playing video games. Ricky is a graduate from Concordia University-Ann Arbor from the Pre-Seminary program with a major in Christian Thought and a minor in Theological Languages. Currently, Ricky is a seminarian at Concordia Seminary in St. Louis as he works on his Masters of Divinity to become a pastor in the LCMS (Lutheran Church Missouri Synod).