Geeking About the Psalms: Psalm 14

The Fool Says, There Is No God

1, The fool says in his heart, “There is no God.” They are corrupt, they do abominable deeds, there is none who does good.
2, The LORD looks down from heaven on the children of man, to see if there are any who understand, who seek after God.
3, They have all turned aside; together they have become corrupt; there is none who does good, not even one.
4, Have they no knowledge, all the evildoers who eat up my people as they eat bread and do not call upon the LORD?
5, There they are in great terror, for God is with the generation of the righteous.
6, You would shame the plans of the poor, but the LORD is his refuge.
7, Oh, that salvation for Israel would come out of Zion! When the LORD restores the fortunes of His people, let Jacob rejoice, let Israel be glad. 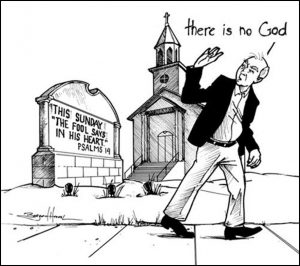 In this psalm, David juxtaposes unbelief with belief, distinguishing between the righteous and the wicked, which is a common juxtaposition made in the Psalms.

Atheists make every excuse to dismiss God. Such petty excuses include, “I can’t see God,” “God is racist/sexist and approves of slavery and rape,” and many other untrue accusations. The former is lazy reasoning. In the latter case, the skeptic fails to make the distinction between prescription and description in Scripture.

Prescription is when God prescribes certain actions and behaviors, such as the Ten Commandments. Description, however, is the detailing of historical events. For example, when David’s daughter Tamar gets raped (2 Samuel 13), this book as a historical narrative (genre is key to understanding context) is merely describing the events that happened; the context nowhere suggests God prescribed this as a correct course of action.

While it’s true there are none who do good whether one is righteous or wicked (Mark 10:18), in this specific context David is contending unbelievers cannot do good deeds; their deeds are abominable. To understand this requires both exegesis and applying the hermeneutical principle, “Scripture interprets Scripture.”

Second, since Scripture interprets Scripture, this also falls into the apostolic context, “Without faith it is impossible to please God” (Hebrews 11:6) as well as, “So faith by itself, if it does not have works, is dead” (James 2:17). James is not saying we are saved by works. What he is saying is this: Faith becomes evident in works—not for salvation, but for our neighbor (see vv. 15-16), which adds nothing to our salvation.

If you claim to have faith but do nothing in response to that faith, you might as well have no faith at all. In other words, if you don’t love your neighbor, what’s the point in saying you have faith at all? In verse 19, the demons’ believing is not being equated to our faith. Faith is the confidence of the heart that trusts in its object.

For us, it’s trusting in Jesus as Lord and Savior, which the demons decidedly do not have. They have a head knowledge—a base knowledge God exists and Jesus is the Holy One of God (see Mark 1:23-24), but they do not believe Jesus is their Lord and Savior and has come to save His fallen creation, especially humans. Biblically, faith, not works, is the essential framework of Christianity. We are created to trust, and from that trust flows works (see Ephesians 2:8-10).

Therefore, as the author of Hebrews uses multiple biblical characters as examples, it’s only possible to please God with faith. Because good works flow from faith, our works can only be designated as good if we have faith. “What about when an atheist gives to charity?,” one might ask. Sure, the world views it as good, but it’s not good works in God’s eyes because it’s lacking the component to make a work good: Faith. Because without God—without faith—it’s impossible for them to do good works and thereby please God. So when God looks down upon these unbelievers, He sees nothing good. This is the point David is making in that simple line.

David makes note of two characteristics belonging to unbelievers. In verse three, he makes mention of their disregard for God’s Law. 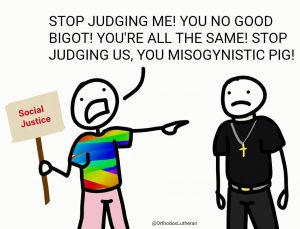 Flowing from their disregard for God’s Law is the second characteristic of unbelievers: Their oppression of God’s people. David asks, “Have they no knowledge?” Despite the prior bold statements he makes of unbelievers, David seems to be confounded these unbelievers have no knowledge of God.

As Paul says later, “For what can be known about God is plain to [the ungodly/unrighteous], because God has shown it to them. For His invisible attributes, namely, His eternal power and divine nature, have been clearly perceived, ever since the creation of the world, in the things that have been made. So they are without excuse” (Romans 1:19-20). Unbelievers—the ungodly—are without excuse because God the Creator is clearly evident in creation—there are marks of intelligent design (this is what theologians call natural theology).

This is why David is confounded, and I think we all can relate. At times, the reality of God is so clear to us we cannot understand how someone could not possibly believe in God. This may be while we’re examining God’s creation in a forest or at the Grand Canyon, or while we’re observing the starry sky. Such evidence for intelligent design—and a personal being behind it—leaves no excuse for unbelief.

Unfortunately, in their unbelief, David notes a behavior pattern of these types who oppress God’s people, whether intentionally or unintentionally. David uses a strange Hebraic idiom—all the evildoers who “eat up” David’s people. To confirm my prediction of this phrase, I turned to my Hebrew Bible, which, as I predicted, the word used for “eat up” is אָכַל (akal), which can either mean “to destroy” or “to eat” depending on the context it’s being used in. We can tell “eat up” is being used metaphorically since 1) it’s a poem that uses metaphors, and 2) we’re smart enough to know David doesn’t literally mean unbelievers actually eat God’s people. I suspect the translators of the ESV use “eat up” since David is contrasting them with the believers who “eat bread,” giving it a nice poetic flow. As God’s people eat bread (commune in peace), God’s enemies eat up His people—they seek to devour their peaceful communion with God.

This pattern of behavior for the unbeliever to “destroy” God’s people can convey numerous things. It can, of course, mean actual destruction in the military sense (think of ISIS today and their efforts to murder Christians who refuse to be subjugated to the Quran). It can also mean verbal destruction—or verbal abuse—such as militant atheists on the internet who go out of their way to insult and mock Christians.

What do we make of this? I’m sure many of us—dare I say all of us—have experienced such destruction from unbelievers. What do we do when this happens? Should we defend ourselves? Unless your life is being threatened, I don’t think so. When we get to Psalm 18, we will see how God is our defender (or deliverer), which is David observing the Law: “Vengeance is Mine, and recompense, for the time when their foot shall slip; for the day of their calamity is at hand, and their doom comes swiftly” (Deuteronomy 32:35). Paul accentuates this in Romans 12:19.

This is an eschatological reality of God’s justice for His people. Verses 5-7 are actually repeated again in Psalm 53:5-6. Both times David is exercising faith, looking forward to the Messianic promise to come out of Zion, which Isaiah later prophesies in 2:1-5 and 24:21-23. David is looking forward to “the salvation of Israel”—Jesus the Christ (Messiah). We have the same hope David had all those thousands of years ago.

As David looked to the first coming of Christ, which was culminated at His Incarnation in the small town of Bethlehem, His life and ministry in Nazareth and Galilee and other places, His death on Mt. Calvary, and His resurrection from the tomb, so we also look forward to the second coming of Christ, which we can trust to happen just as David trusted in His first coming.

I realize looking forward to our deliverance from the evils of our time may seem uncertain at times. I don’t know about you, but sometimes when I watch the news or hear of the increasing number of people rejecting Christ and even Christians who are abandoning God’s Word for the deceitful philosophies of the world, I get overwhelmed and even angry. Sometimes I relate to David with being overwhelmed with all this ubiquitous evil, becoming uncertain of God’s promise. But when I remember who God is by turning to His Word, He restores my hope.

David was in despair of evil many times, but each time as we have seen in the psalms so far, he remembered the promises of God by returning to God’s Word, and Jesus really did come. And so today, we can continually hope for Christ to come, returning to His Word tirelessly to find hope and reassurance in God’s promise.

Father, help me not to despise the unbeliever. Though I fail to understand their ignorance, lead me to love them and show them Your grace and mercy by simply being with them. Use my gifts, talents, and abilities to speak to whom You will. May their eyes be lifted up toward You, my Comforter and Defender, Justifier of my sinful condition. I also pray for my brothers and sisters in Christ who are suffering persecution. Grant them peace and patience; return them to the hope set in Christ. Most especially, deliver them from their enemies, yet not as I will, but as You will.

If you find yourself having difficulty trusting in Christ, pray this: Lord, I am in despair. Where is my hope? I know You have promised to come again, but it has been so long and in my suffering I grow weary of waiting. Bring me back to Your Word so I may find the hope that rests in You again. Grant me comfort in Your Spirit. Teach me to be patient. In Your name I pray, amen.

Garrick Sinclair "Ricky" Beckett first started his Christian writing on a blog titled "The Lutheran Column" where he hires proficient Lutheran writers to convey biblical truth. Along with the blog, he also writes poetry, string quartets in music composition, enjoys doing photography, reading, and playing video games. Ricky is a graduate from Concordia University-Ann Arbor from the Pre-Seminary program with a major in Christian Thought and a minor in Theological Languages. Currently, Ricky is a seminarian at Concordia Seminary in St. Louis as he works on his Masters of Divinity to become a pastor in the LCMS (Lutheran Church Missouri Synod).