Our God is a God of Forgiveness

On the night of Jesus’ arrest Peter denied him three times. Peter was even told in advance of his future betrayal. He told the Lord that even if everyone else left him he never would. You can imagine the crushing grief and regret that Peter felt after that night of weakness.

Jesus had every right to remind Peter of his mistake when they met again after his resurrection. The thing about Christ is his ultimate desire is for restoration in our lives. Instead of putting him down, Jesus asked Peter three times if he loved him. Of course he knew he still loved him, but he knew Peter needed to receive that forgiveness in his heart. He was in need of restoration that could only come from the Lord. Peter confirmed his love for Jesus three times. This made up for the three denials the night that Christ was arrested. Once he was made right with Jesus, Peter had the restoration in his heart he needed to fulfill the Lord’s calling on his life. 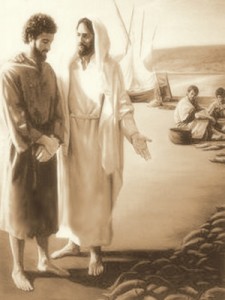 In many instances today, you’ll hear people say that what they’ve done in the past is unforgivable. That there’s no way God can forgive them for their sins. If you’re struggling with this in your life right now, I’d like to invite you to read the whole account of this week in Peter’s life. He was in the inner circle of disciples being one of Jesus’ closest friends. Yet when the Lord was arrested Peter denied him and Christ was crucified. Romans 8:38 tells us this; “And I am convinced that nothing can ever separate us from God’s love. Neither death nor life, neither angels nor demons, neither our fears for today nor our worries about tomorrow–not even the powers of hell can separate us from God’s love.” Scripture tells us that nothing you can do can cause him to stop loving you. He is a God of forgiveness, but the path to restoration has to start with you.

Christian Living Writer at Geeks Under Grace. Follower of Christ. Husband. Father of 1 with another on the way. Founder of Doulos Evangelism & Outreach Ministries. Writer of Regular Christian Guy @ regularchristianguy.com. Proponent of radical, countercultural Christianity.