A car I thought I’d keep for years got totaled before I’d even paid it off. That’s providence for you.

Poor Calcifer, my beloved Nissan Sentra. He was sturdy, red, comfortable, reliable, and never gave me an issue. We took drives into the mountains and went on small bachelorette adventures. I named him, and I intended to give him his own vanity plates once he was paid in full and my own. I made plans to make him last.

And in five seconds of pure, metal-against-metal chaos, I lost him for good.

The SUV plowed into me full speed from behind, pushing me into the left-turning car I’d stopped for. I think I screamed. I think I tried to steer my completely stationary vehicle in hopes I could escape. I know I lost my sunglasses with the force of impact. Once it was through, there were questions from strangers, reassurances from paramedics, the arrival of friends from a birthday party I’d been about to attend. Though shaken, I was wrapped in care and support.

The man from the car I’d bumped approached to discuss the accident. In my shook-up, zombie state I took in what he said at surface level. His wife had recently had neck surgery, he said, but the impact from my car was mild enough it didn’t seem to have affected her recovery. I offered a somewhat dazed: “Glad…glad she’s all right…” while my mind went wild with questions of insurance, no car, and legal issues. 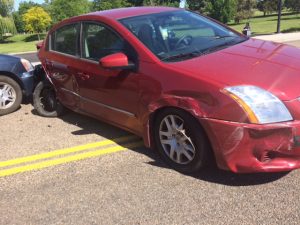 It was later, in an epsom salt bath, I reflected on the man’s remark more coherently. He’d said, “I saw you stopped behind me; I know this wasn’t your fault.” I thought of his daughter racing to the scene, whipping her car into a parking spot, bolting toward the wreck, nearly throttling a police officer to get to her mother. I thought of his wife sitting perfectly still in the back seat of their car as chaos and cleanup went on outside.

I thought of the woman in the SUV behind me, crying on her steering wheel. I thought of me, passing her at the previous traffic light, wondering why she’d paused so long after the light turned green. Was she so distracted? When I merged ahead of her, did I become an incidental buffer?

I think, in this life, there are stories you will only see through a narrow window of circumstance.

Though it sounds crazy, I began to think I was meant to be between those two cars. Oh, I’m definitely not overjoyed to have said goodbye to Calcifer, but between the material dreams I had for him and the wellness of a wife and mother – how can I cling to what God asked me to surrender for the sake of another?

We sometimes believe God will only give us niceties in this life – maybe not consciously, but do you honestly praise God when events go completely against even your basest comforts? Yet maybe we don’t know the grace our losses provide for others. In the end, I couldn’t magic my car back (I’m not Howl, after all). I could only say, “Your will be done.” (Matthew 6:9-13)

But it’s also true the Lord who takes away will give again.

Now, I have a new car, Soot Sprite (Ghibli fans unite!), who is black (natch) and a happy replacement for what I lost. I plan to take him on adventures and make him last, too, but I know in all circumstances God looks after His own — even when He uses His own to look after others. That’s providence for you.