The Fear She Carries: Pyra’s Innermost Being in Xenoblade Chronicles 2

is black as ash.

the one still alive?

if i can’t just die,

will have to be

i will let the

on the pyre of my past

and let the heat

lull me to sleep.

i have enough Foresight to know

that one day you’ll wake me from this slumber

but not enough to trust

that you can accept my mistakes.

i will give you half of my life force

the fear i carry

In the setting of Xenoblade Chronicles 2, the center dynamic is between “Blades” and “Drivers.” Blades, for the most part, look and act just like humans, except they have powerful abilities, and their lives are tied to particular humans, or Drivers. They never die, but instead return to their Core Crystals when their Drivers die, and are reborn again when a new Driver bonds with them. The game centers on two extemely powerful Aegis Blades named Mythra and Malos, with the latter bent on destroying the world, because it’s a JRPG of course! The main character, Rex, is Mythra’s Driver. However, Rex first knows her as Pyra. 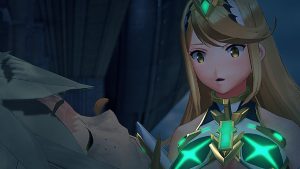 Five hundred years prior, during what becomes The Aegis War, Mythra and Malos have an epic battle in which Mythra defeats Malos at the expense of an entire continent – and the life of a young child and dear friend of Mythra’s, Milton.  a dear friend of Mythra’s. Mythra, shattered by what has happened, creates a new persona for herself (Pyra) to hide her pain. Her driver at the time, a man named Addam, seals her away so that her power cannot be used again.

At the start of Xenoblade Chronicles 2, a group Malos leads uses Rex after he is weakened from his previous fight to find Mythra (now Pyra). Malos is intent on using Pyra’s dormant powers to heal himself, and the group wans to kill Rex. Yet Mythra saves Rex, and she shares her Core Crystal (where Blades come from) with Rex to sustain his life, allowing him to become her Driver. For most of their time together, Pyra does not reveal to Rex her true nature as Mythra, and instead takes on a timid, fearful persona that acts much differently than the cocky, brash Mythra. 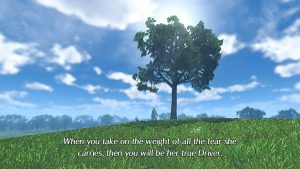 In the back half of the game, Rex has a vision where he meets Addam. Addam tells Rex that to rise to the challenge of being Pyra’s Driver, he must learn to shoulder the fear she carries. Later, in an intense fight with Malos, Pyra explains to Rex that their mission was to go to their birthplace to ask their creator to let them die. When Rex tells her that the entire journey has been for her, she finally reveals to Rex the true nature of the destructive power she carries, and when she sees that Rex accepts all of her, she is able to wield even stronger powers than before and evolves into her final incarnation, Pneuma.

What can we as Christians learn from this? 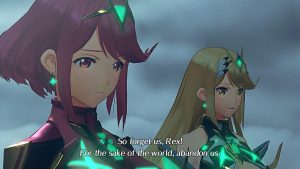 As someone who attended a Christian liberal arts university and now teaches at one, I see my faith most often through the lens of college students. We try to be intentional at faith-based campuses about being “real” as Christians, but for all the talk, students are very wary to reveal their innermost being. As I was the same way as a student, I am able to diagonse that there are still too many surface-level relationships. It requires great vulnerability to let someone see your warts, your ugliness, your darkness. Yet we have the promise that God accepts us as we are, despite seeing all of us at any given moment, including our sins. In my mind, we are “dead to self” in the wrong way at first. We don’t properly “kill” our old selves as the Bible calls us to, but we instead hide our skeletons deep in the closet, terrified that someone will someday find them. But 1 John 4:18 tells us that perfect love Drives out fear ( did you see what I did there with the capital “D”?). To be dead to self as we are called to do in Romans 6 is to accept that past, to accept God’s forgiveness, and to move forward in our faith without constantly looking back in fear. The war is won; we should not be fretting over the battles we lost. 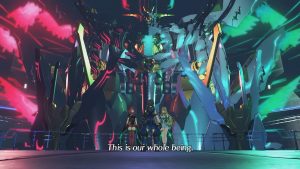 In my mind, this is exactly the mistake Mythra makes. Terrified by her sin, she hides “Mythra” deep in the darkness and becomes Pyra. She “dies to self,” but not really. In Torna ~ Golden Country, we see at the end of the final battle of The Aegis War, that Mythra’s Foresight (her special ability to see the very slightly into future) goes into overdrive, and she has a brief “flash forward” of Rex. She knows that one day, she’ll meet someone special who will become her Driver, and because of that, she chooses to hide her innermost being. I believe that her telling Rex that she will share half of her life force to save his life is symbolic. She is floundering, searching for the right way to be “dead to self.” First, she tries hiding under a new persona. Then, she makes it her mission to seek assisted suicide. It isn’t until she truly feels that Rex loves her and that she can trust him that she lets go, truly becoming “dead to self” and ascending to her form as Pneuma. At the end of the main game, she gives Rex her entire Core Crystal (Aegises can live briefly without it) so that Rex is not at risk while she stops a structure from falling. Later, she reappears from the Core Crystal without having half of it tied to Rex. Why did she not do this to begin with? In my mind, it’s because the fear of her past keeps her from completely sharing a bond with Rex. 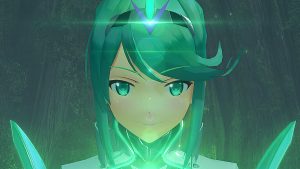 In this analogy, we are the Blades and God is our Driver. Throughout Xenoblade Chronicles 2, you meet Blades with every possible level of connection to their Driver, but the game establishes a tenably powerful hope and goodness that comes from Blades and Drivers who share a deep bond—particularly Jin and Lora in Torna ~ The Golden Country. But unlike those characters, we have a Driver who cannot die, cannot lose, and will not abandon us or ever stop loving us.

Because of Jesus, it should be even easier for us to step into the bond that God desires than it is for Pyra to meld her fate completely with Rex’s. It’s also worth noting that when Rex finally convinces Pyra to connect with him completely, a large part of his argument concerns the faith they both have in their traveling companions, and how much Pyra is loved not only by Rex but by everyone. Likewise, when we step into that deep, intimate place with God, we should be compelled to seek that kind of genuine intimacy with our Christian brethen, and to count on their support in the times when we are tempted to pull away.

What fear are you carrying, that you should be giving to God instead?