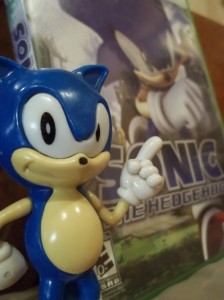 Seen as a possible Sonic Adventure 3, this title took brand new ideas and introduced them into gameplay very similar to Sonic Adventure . It was also the debut of Silver the Hedgehog, Iblis, Mephiles the Dark, and Elise (the Human) . Sonic’s story follows Dr. Eggman (who has been given a new realistic appearance) and his attempt at world domination and Sonic’s subsequent thwarting of said plans. Silver’s story shows a future ruined by a lava monster named “Iblis”. Silver travels in time to attempt to eliminate the one who triggered Iblis who he believes is Sonic the Hedgehog because Mephiles told him so. Shadow’s story begins with him attempting to rescue Rouge the Bat from Dr. Eggman, but later antagonizing Mephiles the Dark and sealing him in a scepter, which he later breaks free of. The near-end of the game requires a prelude to understand.

When Elise was little, Iblis was sealed inside her, but she was warned not to cry. The future shows that if she cries, Iblis will be released. If Mephiles the Dark combines with Iblis, a monster known as “Solaris” is the result. With the ability to exist in the past, present, and future and destroy dimensions, this creature proves a strong entity. In the end it is revealed that Mephiles fooled Silver into trying to kill Sonic so that Elise (who is a human and in love with Sonic) would cry, releasing Iblis and giving him the ability to transform into Solaris. Shadow had previously sealed Mephiles in the Scepter of Darkness, but Mephiles claims what worked ten years ago does not work now. Silver eventually comes to the truth and even defends Sonic, but the blue hedgehog is eventually killed by Mephiles, causing Elise to cry and the flames to be released. Later, all characters are teleported into a bleak dimension where they go to previous zones to collect the Seven Chaos Emeralds to revive Sonic. He is revived and he, Silver, and Shadow transform into their Super Forms and defeat Solaris. Solaris is reduced to a simple candle flame, which Elise blows out, though it takes the cast back in time before Sonic and Elise met and erased the memories they had of what happened.

Okay, now that the story is out of the way, let’s get to the gameplay. Sonic runs through zones attacking with a spin dash, homing attacks, sliding attacks, and bound jumps. Some zones are extremely fast-so fast that if Sonic runs into something not usually harmful (like a rock)  it will cause him damage and possibly throw him off-course. Shadow’s gameplay is similar, with melee attacks performed mid-air after the homing attack, and different attacks like the Chaos Spear throw. Silver uses a different method altogether . He is empowered with “Psychokinesis”, an ability similar to The Force. He uses it to throw things at enemies, pick up and move objects, and even fly.

So what fifteen things are lovable in this game? Well……

3. Very lengthy, lots of things to do.

4. Many different attacks for each character, not just boost and homing attacks.

5. Fun boss battles (even the monsters, which are usually not as much fun to play as Eggman’s Robots).

8. Realistic re-design for Dr. Robotnik, though it probably wouldn’t work well in any other game.

9. GREAT music. Even people who hate the game love the music.

10. Robotnik is much more evil and less comedic, which bares similarity to SatAM”s rendition of him.

11. Voice acting. Though it gets awkward at some points, it is overall good.

14. Elise gets captured by Robotnik, so she isn’t going crazy over Sonic in every scene.

15. Shadow does a total round-house kick on Silver in one of the cut-scenes. Quality comedy entertainment.

16. (Extra present for you!) A nice multiplayer mode that uses cuts from some of the main game’s zones.

So what do the masses of Geeks Under Grace think of Sonic 06? Is it just an annoying half-finished sequel to Adventure 2? Or is it the best game in the series? Well, that’s up to you.

*Information on what Systems it was created for used from Wikipedia , see http://en.wikipedia.org/wiki/Sonic_06