A Robot Brings the Fight to Nintendo Switch

Do you like Metroidvanias? Do you like roguelites? Well then rejoice, for A Robot Named Fight!, a “metroguelite” by solo developer Matt Bitner is now available for the Nintendo Switch on the Nintendo eShop (and Windows Store) thanks to publisher Hicents.

From our writer Simon Jones:

Originally released on Steam in 2017, the game has gathered a loyal fan base with almost 200 “very positive” ratings on Valve’s platform, and an overall “Strong” rating on Open Critic. You can read our full review for the PC version of A Robot Named Fight! here. Expect 16-bit graphics akin to the days of Super Nintendo and a certain bounty hunter, but with randomly generated power-ups and perma-death. 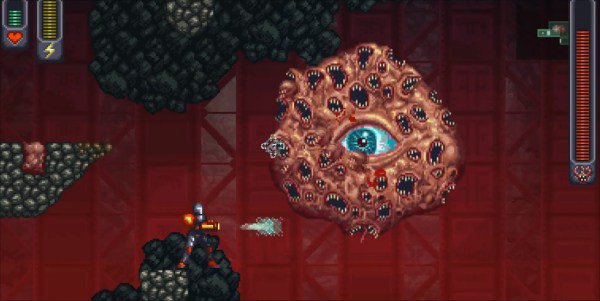 The Nintendo Switch version of A Robot Named Fight! includes 100% feature parity with the current Steam build, with support for seeded runs, new weapon and power-up combos, and even a new (secret) ending!

A Robot Named Fight! can be purchased for $12.99 on the Nintendo eShop. The game is rated T for Teen.