Are You a Good Man, Arthur Morgan? 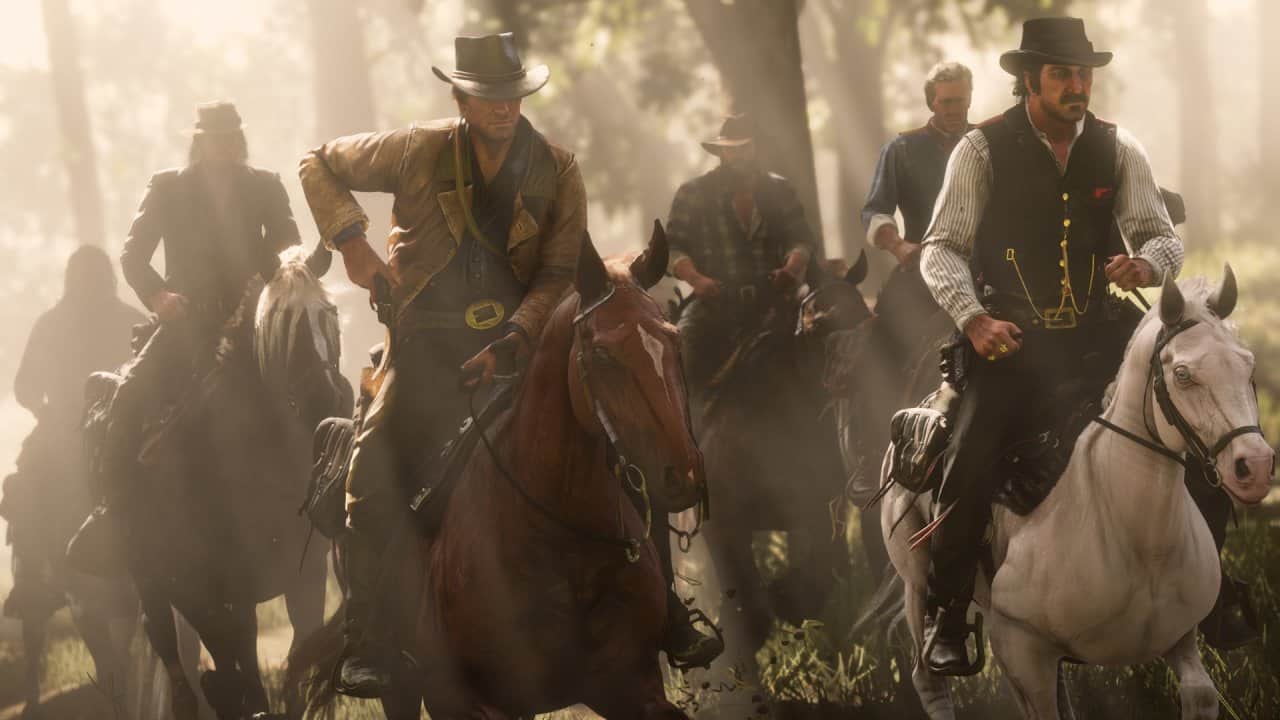 The world of Red Dead Redemption 2 is a harsh one, with most people struggling to etch out an honest living, while others form gangs instead. Some of these gangs are unrepentantly violent, taking what they want with no regard to how savage their actions can be towards others. The Van der Linde gang is anarchistic by nature; they instill in each other a deep resentment and mistrust in the federal government, and yearn for the bygone days when the bureaucrats had less control over peoples’ manner of living. Being an outlaw in a world that is becoming less and less wild by the day is a terrifying prospect for the Van Der Linde gang, but despite rival gangs and government agents threatening their very existence, they continue to press on under the charismatic leadership of their leader, Dutch.

RDR2’s main protagonist of the game, Arthur Morgan, acts as enforcer for the Van der Linde gang, and it’s through his perspective that the player begins to witness how this paradigm will change for himself as well as the other members. Arthur presents himself as very much a thug and Dutch’s strongman, but a closer look while playing as him reveals someone who is far more intelligent and caring than he tends to let on. He notes his deepest thoughts in his journal, privately commenting on events as the story progresses, and speculates that Dutch is beginning to grow more paranoid and less altruistic, and that the gang as a whole is straying from the values from which it had been founded on. 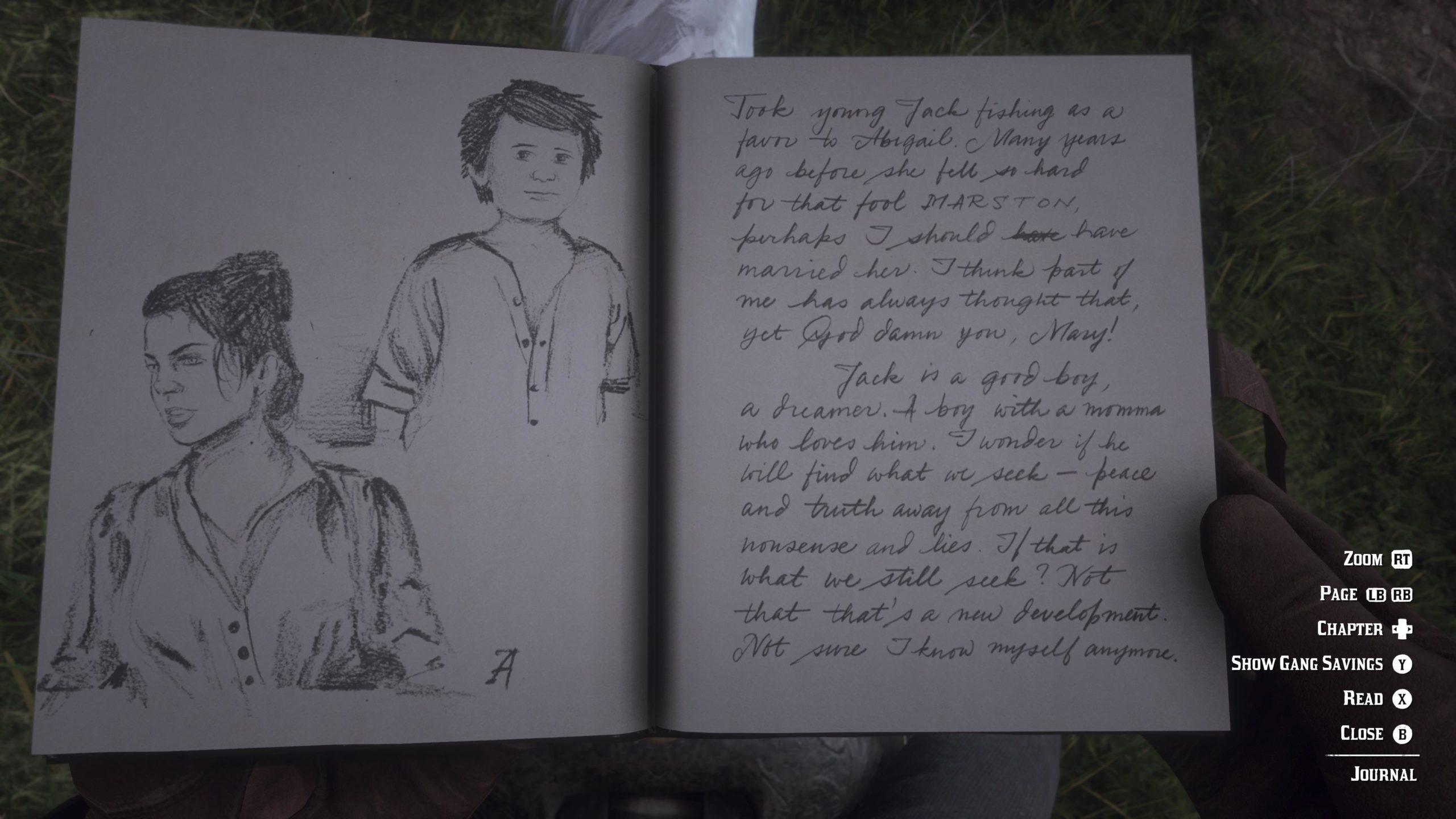 As a game mechanic, Arthur is given an Honor meter that measures the merit of his actions throughout the game. Performing positive actions raises his honor towards the right, whilst negative actions will draw it towards the left. Its impact seems subtle at first, ranging from the nature of the interactions Arthur has with other members of the gang, to his own comments concerning how his choices affect others.

On numerous side quests throughout RDR2, if the player makes Arthur perform a generous act or refuse a reward, more than one stranger will make the comment that Arthur “is a good man.” Arthur is quick to brush off these comments, stating that he is nothing of the sort; after all, he has killed and harmed more people in his life by his actions than he has helped. A closer examination into Arthur’s journal reveals a man in conflict with his actions, and yearning for forgiveness and the hope of a better world. His inner turmoil intensifies as he sees Dutch begin to develop paranoia and grow unhinged, leading to members of the Van Der Linde gang getting killed by rival gangs and Pinkerton agents, forcing them to move their camp from one area to the next and disheartening the surviving members. 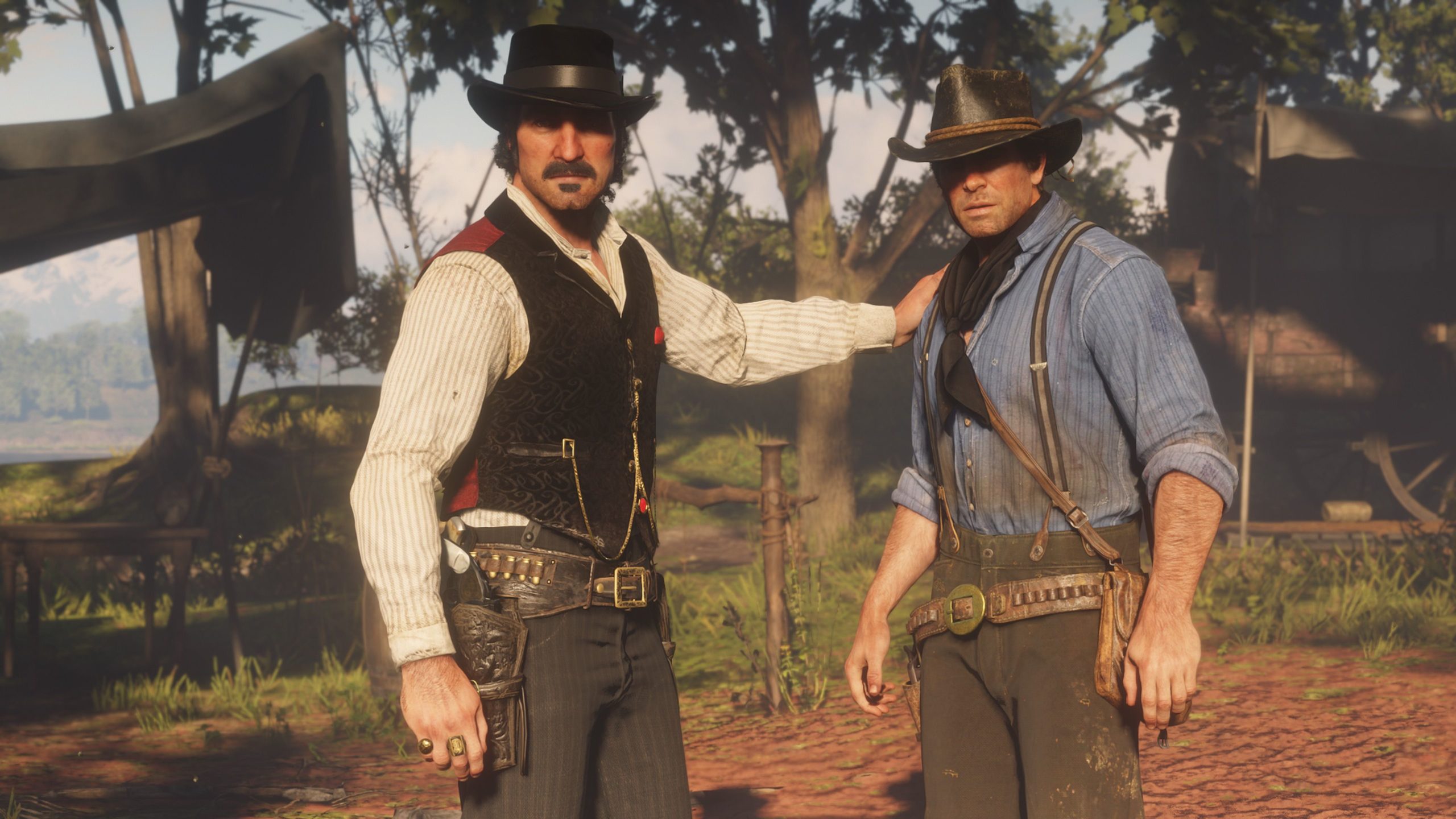 At a certain point in RDR2 in the bustling city of Saint Denis, Arthur can encounter  a priest by the name of Brother Dorkins near the cathedral. Completing his mission then introduces Sister Calderón, a motherly nun who is quick to see beneath Arthur’s hardened exterior. She warmly offers him advice and words of encouragement, and in return she is one of the few people Arthur comes across in his travels who he shows nothing but respect for. Through his own convictions and her guidance, Arthur gradually begins to change and behave more altruistically towards others, in contrast to Dutch who becomes more selfish and violent with each progressing chapter. Although Arthur’s past is one full of violence and sin, he also strives to live honorably and assist others where he can without asking for any reward.

Arthur will meet Sister Calderón one final time at a train station near the climax of the game. By this point, Arthur has been diagnosed with tuberculosis, a terminal disease during this era, contracted when he beat a helpless farmer to death earlier in the game during a loan shark mission. He comes clean to the Sister, confessing that he has lived nothing but a bad life filled with terrible choices that he has made, many of them affecting the people he has claimed to love. She then counters that the real problem is that Arthur doesn’t know himself as well as he thinks he does. She shares with him that she has also lived a terrible life that was of her own making, but she discovered that while life can be painful, it can also be filled with joy and beauty as well. She advises him to see his prognosis as a blessing, that he has a chance now to do something good, like helping someone, before it is too late. “Take a risk that love exists, and do a loving act,” she suggests to him. When Arthur confesses that he still doesn’t believe in anything, the Sister surprises him by sharing that often neither does she, until she encounters someone like Arthur, who is willing to help others he encounters on his travels, before everything starts to make sense to her. Inspired by her words and taking them to heart, he begins to work on repaying those he has wronged, and to save the members of his gang that he feels are in immediate danger as Dutch’s sanity wanes, and the gang slowly begins to turn on one another. 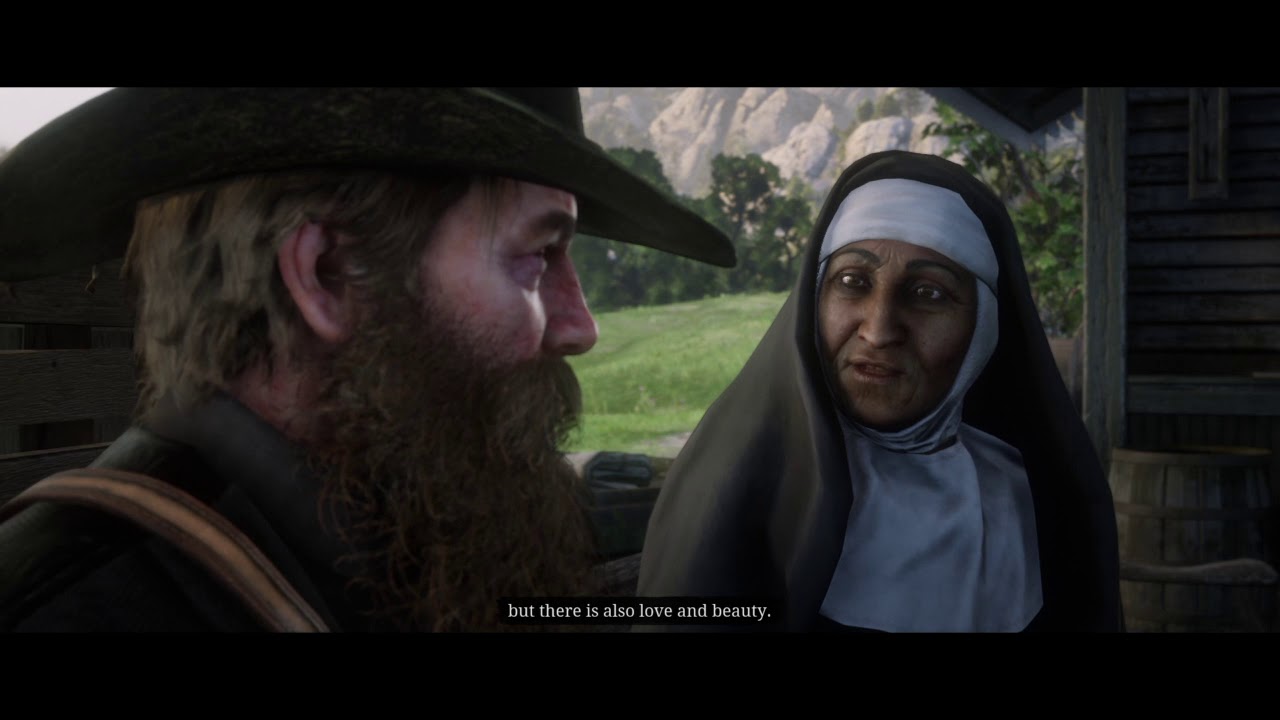 In a game that increasingly becomes bleaker with each progressive chapter, it is refreshing to play a morally complex character such as Arthur Morgan, who puts the needs of others before his own, whether they are members from his own gang or complete strangers. The choices the player makes reflect Arthur as a developing character; this is shown best when Arthur rides one final time back to camp, echoes of those closest to him and his decisions that have impacted others are magnified, giving weight to what kind of legacy he—as the player character—will leave behind. One of these echoes can best sum up Arthur’s struggle throughout his story, that of his old flame Mary: “There’s a good man within you, Arthur, but he’s wrestling with a giant. And the giant wins, time and again.”

The Bible is filled with stories of the ongoing struggle between good and evil, since the fall in the Garden of Eden. We see how many times the Israelites fell into sin before repenting and promising to God that they would do better, only for them to sin again, and the cycle to repeat. We read about heroes such as Gideon, David, Solomon, and many others who fight in the name of God, only to succumb to their vices and sin, with great repercussions following for their actions. The same can be seen in the story of Red Dead Redemption 2, when the Van der Linde gang’s crimes and notoriety finally catch up with them; the gang is disbanded via police massacre, its surviving members silently taking flight into the night, or going all-in with Dutch in his descent into madness. 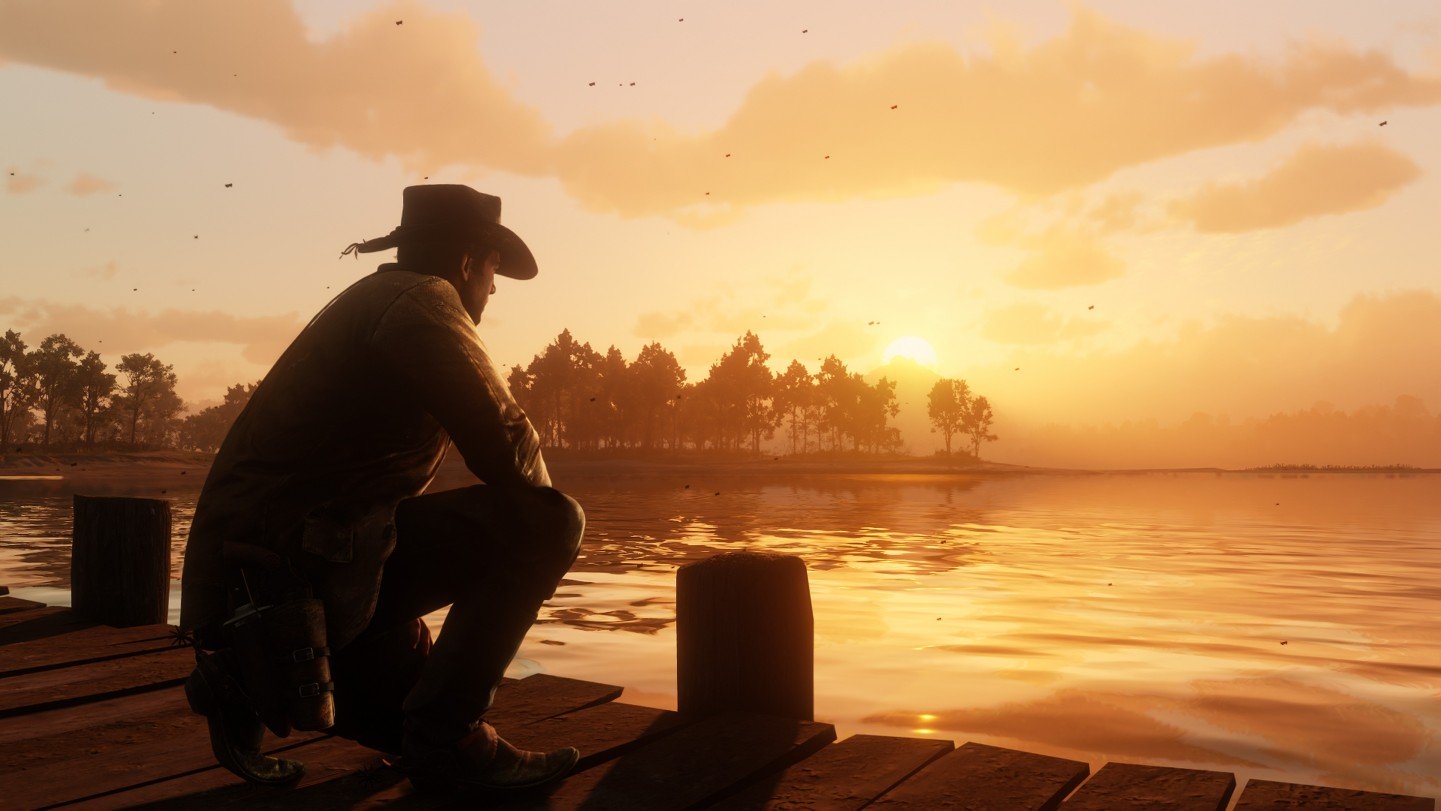 Arthur’s own struggle with morality leads him to believe that he is not worthy of being seen as good or even of having his sins forgiven, no matter how much he wants to find redemption deep down inside. Before Arthur can find forgiveness from others, he needs to first forgive himself. We can identify ourselves in Arthur’s struggle as sinners, when we don’t feel we are worthy of forgiveness for our past actions. Time and time again in scripture, however, God is moved to forgive the Israelites and individuals who have sinned against him when they seek His forgiveness. This comes to a point where God unveils his plan to redeem all of mankind of sin, by sending Jesus to die on the cross for our sins, as Paul notes in Romans 5:8. Sister Calderón also assists Arthur on his path to redemption, although not in an explicit way. She helps him make peace with his upcoming death, and encourages him to use what time he has left to help others and do good. This motivates Arthur to save his friend John Marston and his family, and help them escape Dutch’s clutches when he turns on them.

Is Arthur Morgan a good man? He is not in the narrow sense of the word. However, he has the capability to do good, as do we. Arthur’s story of redemption encapsulates our own struggle between good and evil, as we often struggle with our own giants in life. Just as Arthur finds peace by doing a loving act, we may also find true peace and joy when we show others kindness and grace, just as Christ did for us through his sacrifice.