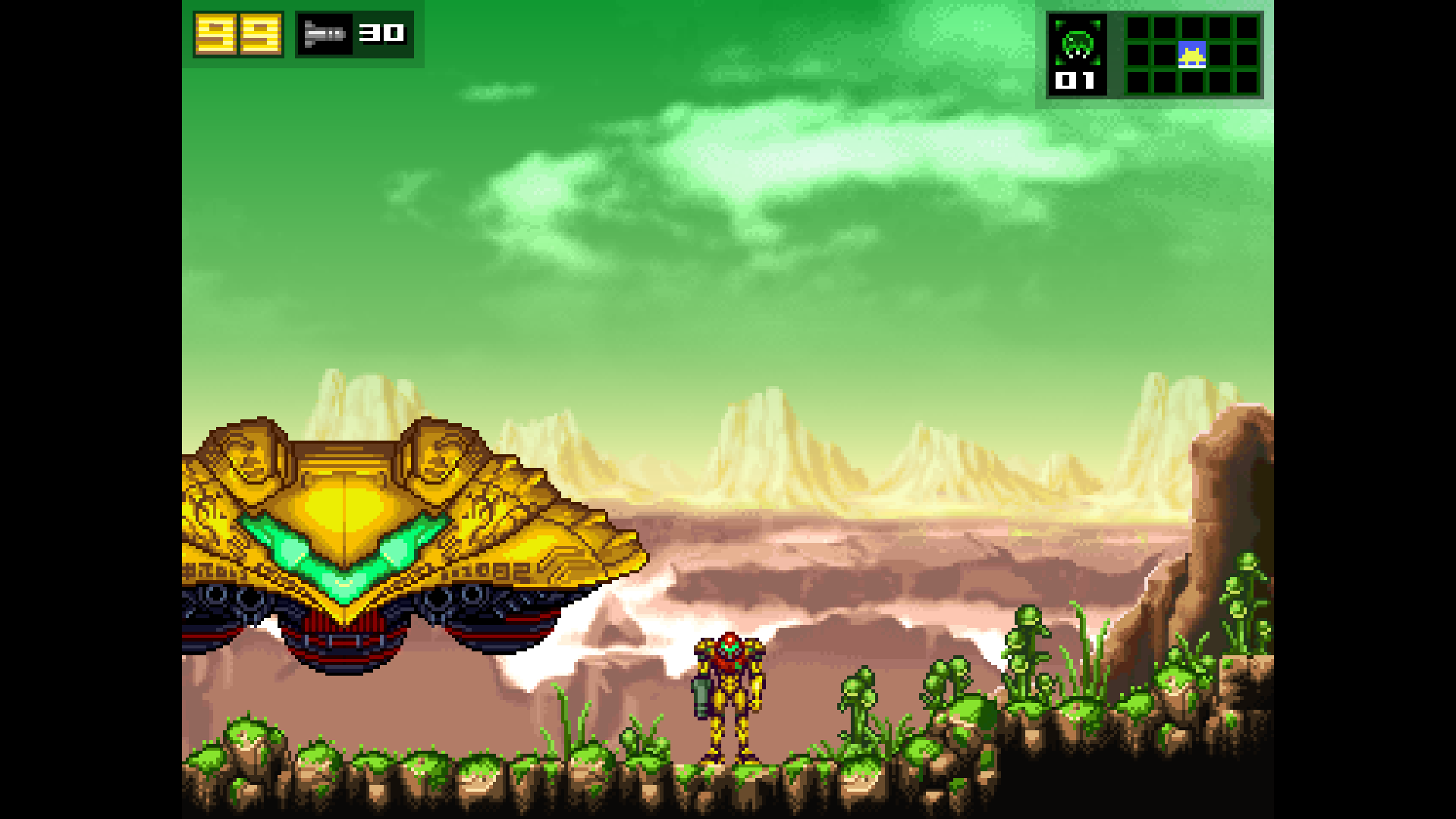 An inattentive readier might mistake this screenshot for Super Metroid. Compare this to the Metroid II screenshot on the previous page. Eyeballs everywhere sigh in relief.

As I have said, I have never played Metroid II, but the way that AM2R opens should hit every Metroid fan right in the feels. I would argue that Samus’ gunship is the most iconic space ship in all of video games, immediately recognizable like a Star Wars tie fighter or the USS Enterprise in Star Trek, and I mourn the fact that the shooter mini-game utilizing the gunship will die, little-known on the Wii U’s Nintendo Land. In a standard Metroid game however, it would be my favorite location to save; I would often trek back up to the surface of the planet to save, quit, and reload, just hear one of my all-time favorite fanfares, “Samus Appears.” Ogling over the gunship and  listing to “Samus Appears” is essential Metroid tradition for me.

Though I did play Super Metroid first, the Metroid Prime methodology of stripping Samus of her power suit upgrades and asking players to reacquire them is a tradition that sometimes gets old, even if I do enjoy acquiring the Varia Suit. At least AM2R begins with the basic missile launcher and “grip,” which was apparently canonized in the DS Metroid games. Here is an example of morph ball (and bomb) immediately paying dividends with a missile upgrade. Credit to Nintendo, this is excellent that Guasti has taken note. 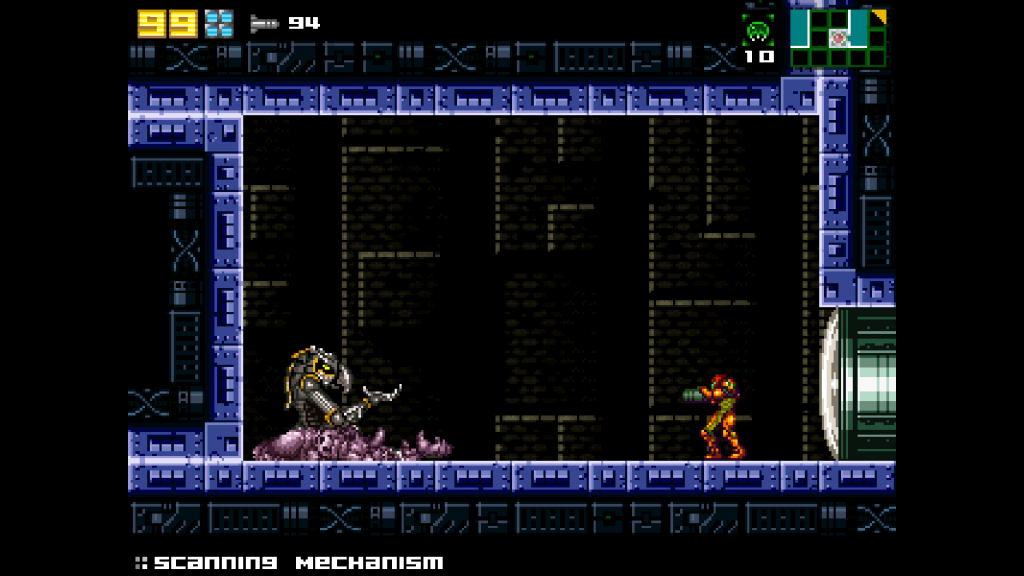 It took me 1500 words to decide if it would be fruitful to compare Samus Returns to AM2R, especially because I did not want to steal Gareth Tucker’s thunder as he wrote our official review; I have determined that the comparisons are inevitable. This screenshot reminds me that the boss encounters in AM2R are overall better, with the exception of the final fight in Samus Returns. Taking a cue from Super Metroid, the power up room treats players to an unexpected boss fight. From this point forward, incredulousness is warranted. 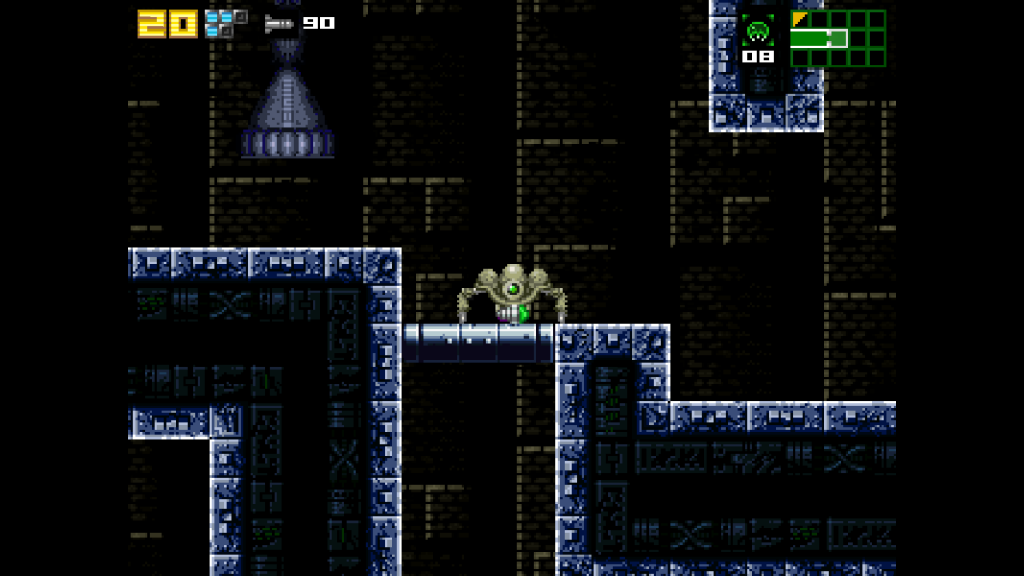 Where is Samus? She is off-screen controlling this robot.

In fact, I would say that AM2R’s encounter design surpasses what Samus Returns has to offer. The aforementioned Kotaku post notes that Nintendo producer Yoshio Sakamoto had heard of AM2R, but at the time he was questioned as late July 6, 2017, he had not seen it. The implicit question here is why would the official developers care what the unofficial developers were doing? To borrow some of those ideas might have meant that Nintendo could owe royalties to an otherwise counterfeit operation. Well, at least looking at AM2R—even with a clandestine side-eye—would have paid dividends. 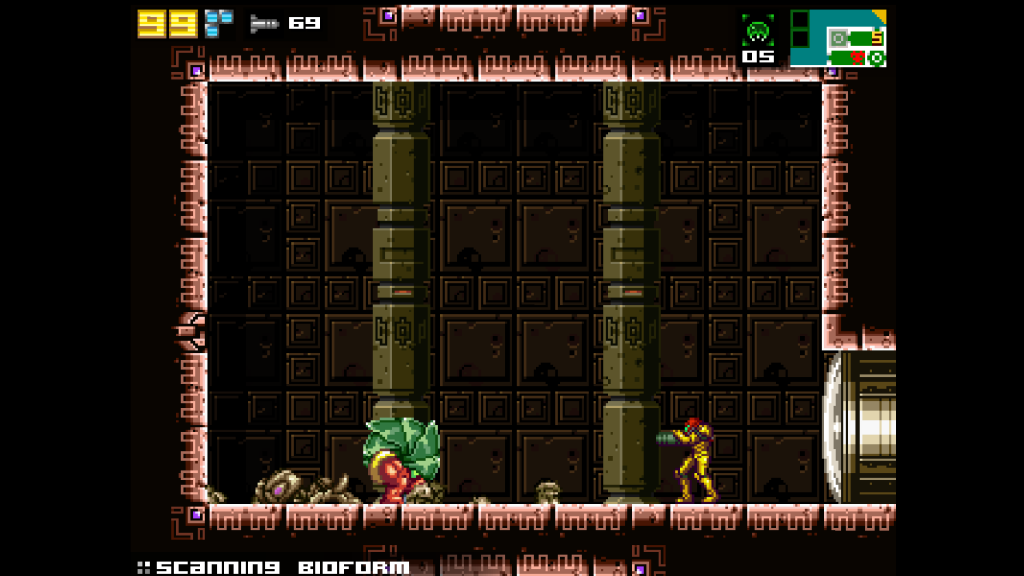 AM2R has memorable boss fights beyond fighting Metroids through their life cycles.

In addition to traditional earthy, volcanic and aquatic environments found in every Metroid game, AM2R takes players through an underground energy plant, a robotics facility, and a Federation campsite, with the option to visit a derelict Federation ship. With every new environment brings forth new enemy encounters as well, such as the robot above. Samus Returns, on the other hand, presents roughly three types of enemies throughout its adventure with little variance or digression: an air type enemy, a ground-type enemy (charger), and a fixed environmental hazard that can be destroyed. Four hours into AM2R, I was still excited to see what comes next; four hours into Samus Returns, I wondered to myself if I had already seen all the enemies the game had to offer. 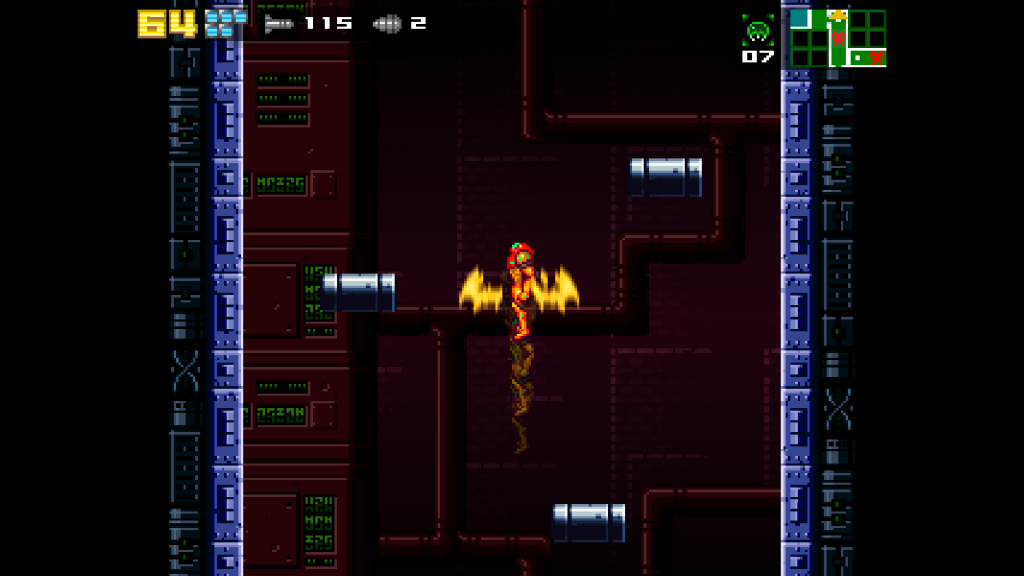 Speed boosting is one of my favorite things to do in Metroid. It is in AM2R, but conspicuously missing in Samus Returns.

The games are relatively equal when it comes to upgrades. I do mourn the lack of speed boosting in Samus Returns. Instead, Nintendo included an Aeion option to slow time, preventing Samus from instantly dropping through disintegrating surfaces upon contact. Indeed, the Aeion abilities, toggled by the 3DS directional pad, are the grand spanking new mechanic in Samus Returns, and they are adequate enough to render the missing skills from AM2R negligible. 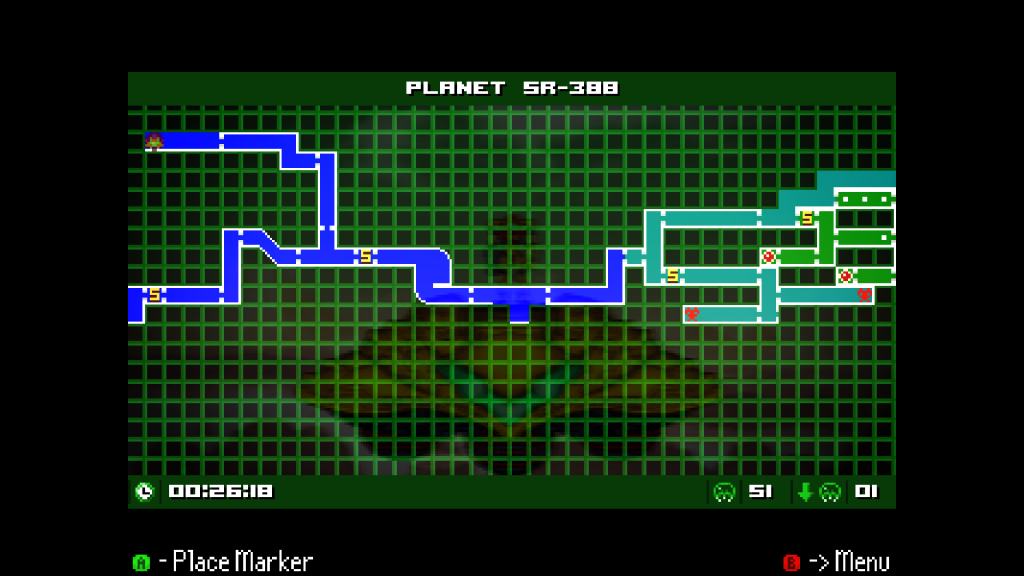 Old-school Metroid fans who reminisce about having to draw their own maps back in the early NES and Game Boy days can have a seat in the corner. Ain’t nobody got time for that! Like Zero Mission, AM2R also does not leave players in the dark by including an easily interpreted map. Whenever I felt stuck, I would just look at my map and see where the solid white lines break. Where those gaps occur, I had not visited.

Both games add quick travel features to minimize the lull of backtracking. For this purpose, Samus Returns includes a shute in every sector. AM2R is stingier, requiring players to advance far enough in the game to unlock a specific room where the fast travel pipes are located; after using them once, players can go to their end points to return to the quick travel hub, and then proceed to the next location in the network. A significant difference between the games is that Samus Returns abuses the use of elevators to connect each section of the map, creating a disconcerting segmentation that presents different areas as stages or levels, a sensation unfamiliar to me in any Metroid game. On the other hand, AM2R‘s map is completely contiguous, enhancing immersion, and staying true to the formula.

All of this ties directly to pacing. In addition to the departure in map structure, as Gareth notes in his review of Samus Returns, the introduction of the melee counter-attack reduces the game from a run-and-gun to wait-bait-haters-gonna-hate. There are several situations where it seems as though a fight will last forever unless players trigger an enemy’s “twinkle” attack—taking cues from games like Punch-Out—to earn a counter opportunity for heavy damage delivered through a quick time event animation. Perhaps Nintendo is adapting to industry’s penchant for cinematics. I would have preferred that they leave that to the slower-paced FPS adventure that is the Metroid Prime series. AM2R allows a skillful player to be appropriately frantic as well as precise. 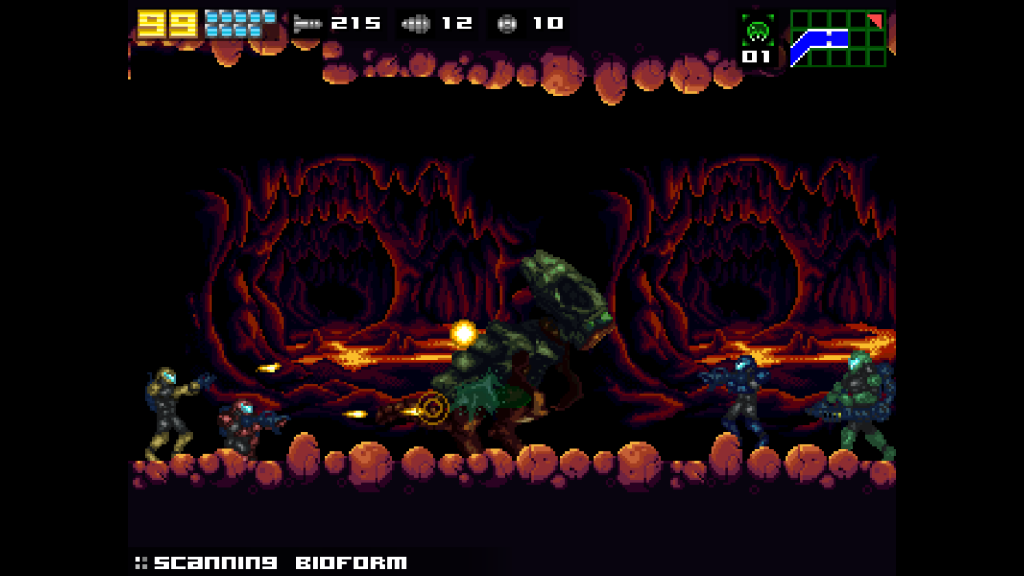 The cutscene demonstrating how Federation forces struggle to take down a metroid is a compliment to Samus.

In both games, however, chasing down metroids in Samus’ genocidal escapade gets old. Samus Returns prolongs the endeavor by introducing metroids that have to be chased through several screens and arenas. The repetitive nature of this core gameplay objective strongly reminded me that Metroid II was designed to be mobile, and thus, not played for long sessions. Had I taken more breaks, would I have returned refreshed enough to do more of the same?

In a vacuum, AM2R‘s cutscenes are great despite their small numbers and 16-bit assets. Samus Returns blows it out in the category of visuals; it is, in fact, celebrated as one of the best-looking 3D games despite the repetitive foregrounds and backgrounds. I do very little portable gaming myself, yet I kept my playthrough in 3D mode for the duration of my sessions. 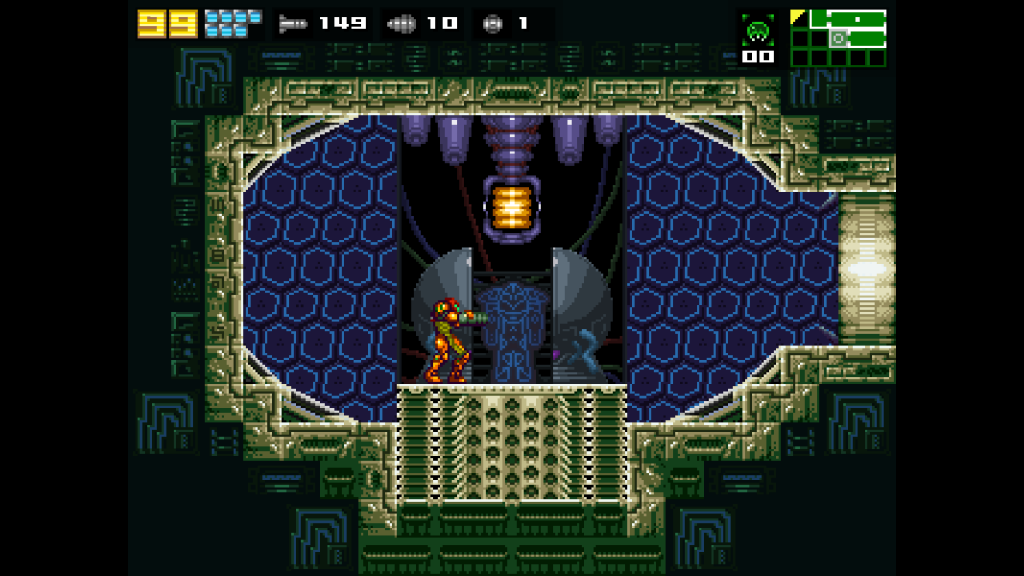 I was never a fan of the gravity suit because its purples would override Samus’ traditional orange.

Even though Nintendo possesses the official license, AM2R strikes me as a more faithful adaptation to what I believe a modern Metroid II should be than Samus Returns’s interpretation. I say this before even mentioning AM2R’s outstanding soundtrack, which Guasti composed himself. Go ahead, give it a listen!

Of course I recommend that everyone tries out AM2R, but I am not going to provide a download link. Though I am obviously in favor of emulation, I will not badger others to participate—Romans 14:13-23 “do not cause others to stumble” applies here. Instead, I will end with a playthrough video with the hopes that the hesitant will join us fans in the celebration of this monumental accomplishment. Again, Milton Guasti taught himself practically everything about video games over the course of eight years amidst tragedy as well as new life. He gets a job in the video game industry while others continue to make excuses.