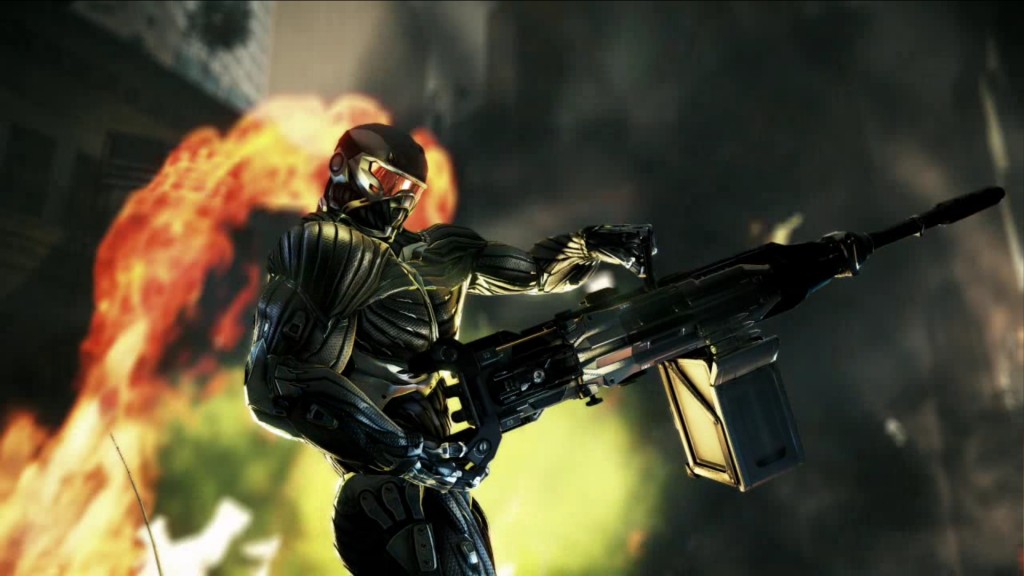 Time to flex your ridiculously proportioned bodies (in suits) and whip out your tape measures to compare BFGs! It’s FPS time!

SPOILER WARNING: For those unfamiliar with my Backloggery Beatdown series, these are not reviews, but instead, clairvoyant apotheoses of gaming. The assumption of this series is that readers have already played the game, and are interested in further reflection.

The original Crysis made my “Games of the Generation 2006-2013”list—a considerable feat because I am not easily impressed, especially by additions to the most saturated genre in modern times that is the FPS. Technically speaking, Crysis still makes some PCs whimper despite being released in 2007, and it justifies its hardware demands by remaining easy on the eyes to this day. This is particularly true for Crysis: Warhead, the stand-alone expansion/sequel which runs on an optimized version of Cryengine 2.

In terms of gameplay, I’ll just fabricate a scenario and explore how it holds. The objective is to hack into a heavily-guarded computer in the center of a military outpost. You can:

-Use stealth to sneak in and out (while hiding behind buildings, within shrubs, and under vehicles as suit energy recharges.

-Use sprint (maximum speed) to run in and out like Sonic.

-Use strength to jump over the walls from the side or rear of the outpost.

-Use a vehicle to ride right through the barricaded entrance blazing everything in sight with mounted gun until vehicle has to be abandoned due to damage before it explodes.

-Attach C4 to a vehicle, charge the barricade, abandon vehicle, and set off explosives.

-Chuck grenades over the walls of the outpost until soldiers come out to investigate.

-Or ninja it—decloak, headshot, recloak, repeat. Use maximum strength and melee if that suits your fancy.

The number of options for achieving a goal are variable and satisfying. Crysis/Warhead is the closest I have seen to a sandbox style game with appealing gunplay, with the radial providing a selection of  silencers, grenade launchers, or tranquilizer darts as well as a few crosshair options. A handful of corridor sections such as the aircraft carrier hull or the adventure inside of an alien space ship did not denigrate the open-ended first three quarters of the game.

Crysis 2 reverses the progress that Crysis had achieved for the FPS genre. While the majority of the game takes place outdoors, few times do I actually feel like I am outdoors. There are no oceans to swim in, winding trails to venture, or elevated summits to conquer. A generic war-torn cityscape encircled by skyscrapers as boundaries supplants tropical paradise as the setting for Crysis 2, reducing the sandbox style FPS into not quite a corridor shooter, but at the very least an arena-style military shooter as seen in—sigh—Call of Duty. 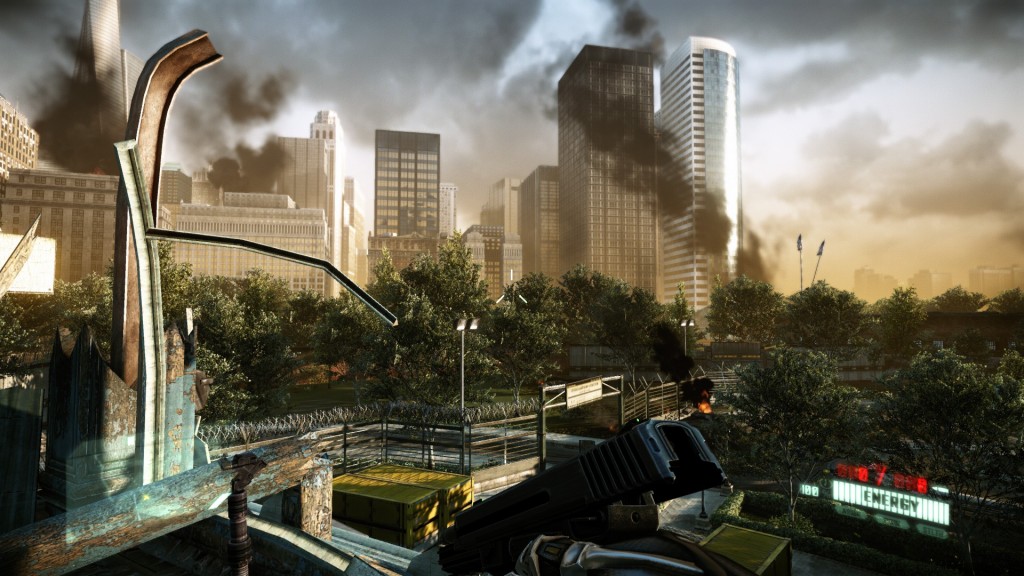 NYC is under attack! This is NOT a cliché at all.

The game is not bad, but it also does little more to present itself as anything other than another notch on the log that is my backloggery. With the exception of the theme song,(that I found out on YouTube that Hans Zimmer helped produce) Crysis 2 is unremarkable. All of those goal-achieving options that I listed in Crysis are now spoon fed rather than left to the devices of the individual as the suit says “tactical options available” whenever the player enters into a new room—I mean, “area.” A new feature, the visor, is used to scan the area for these options which include collecting ammunition, flanking the enemy, or simply exploring. The latter does not provide many options, however, because this is indeed an arena shooter, but I suppose those who do not mind their hand being held to conquer areas of the game will find this feature a welcome edition.

Speaking of goals, while Crysis  is not exactly cutting-edge in terms of its offerings for players to do, its “capture the flag” style is preferable to Crysis 2’s “KILL THEM ALL” method. Bypassing difficult fights is not completely absent, however; toward the end of the game, I could use stealth to disable a tentacle-shaped bio-WMD without fighting a mini-boss. Nevertheless, the “KILL THEM ALL” theme was forged as a fundamental aspect of the game because killing the Ceph—the aliens from the last game—are the only way that the player can upgrade his/her suit, as these enemies drop biomass that the suit transmutes into, uh, upgrades. Furthermore, the explanation for the suit being able to process organic matter is woven within the story. 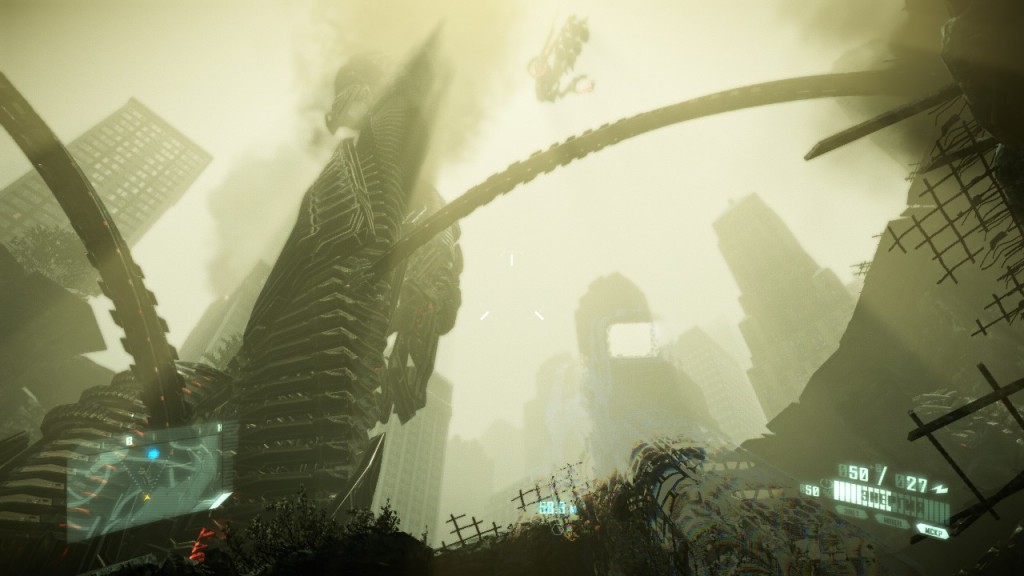 It’s the attack of the prodigious tentacled phallic symbol which emits a “mist” from its apex that reduces humanity into viscous carrion. I’m sure Crytek had a chuckle.

Indeed, the story, or the genuine attempt to justify spending ten hours runnin-an-shootin. The Ceph, after the KPA (Korean People’s Army) awakens them from their dormant state in Crysis, pour out of their mothership while unleashing what is dubbed the “Manhattan Virus” in their wake in an effort to terraform the planet by reducing humans into biomass. Off-screen during the prologue, Jacob Hargreave pisses off Prophet by revealing that he uses the squad in Crysis as test subjects; the Nanosuits were prototypes developed from stolen Ceph technology and the former wanted to see how humanity could stand up to the extraterrestrial. Prophet goes rogue and steals Nanosuit 2.0, but becomes infected by the virus. There is apparently only one version of this suit exists, and Crysis point men Nomad and Psycho are nowhere to be found as Prophet runs riot, searching for a way to repress the Ceph invasion while a special task force group, C.E.L.L. (Crynet Enforcement & Local Logistics), hunt Prophet because they are told that he is a walking biological weapon, spreading the virus everywhere he goes. But in actuality, the meta-narrative of Crysis 2 is that Nanosuit 2.0 becomes sentient—dare I say symboiotic. Unprompted, the suit begins to process an antigen for the virus, but because Prophet had long ago contracted it, he would not survive long enough for the suit to complete a cure. Besides, the suit still needed a catalyst. By pure serendipity, Prophet encounters a cadaverous Alcatraz , who was waylaid by a Ceph scout ship, and pulls his body out of the water and places him in the suit. Prophet commits suicide, hoping that Alcatraz will act upon all that he tells the mortally-wounded soldier in their short time together; these promptings such as “find Nathan Gould” are strategically revealed to the player during opportune moments of the game as part memory, part subliminal messaging emitted from the suit as it continues to develop its own personality derived from Prophet. Nobody knows that Prophet is dead, so Gould, C.E.L.L., and Hargreave continue to hunt for Alcatraz-as-Prophet, though it is the suit that everyone really wants: C.E.L.L. because it is stolen tech; Gould because he knows it is the only viable weapon humanity has against the Ceph; Hargreave because he personally designed the suit as a biological weapon against the Ceph.

Hargreave flipping the Ceph’s tech against them is the irony in all of this, and the fact that he himself is like (New Vegas Man) is the big plot reveal that “justifies” Prophet stealing the suit and setting the plot in motion rather than Hargreave using the suit to defeat the Ceph himself. Wait, didn’t we see a similar demonstration of hubris by an individual who had survived a calamity and planned over an entire century how to triumph above all when the stuff finally hit the fan in some other game? 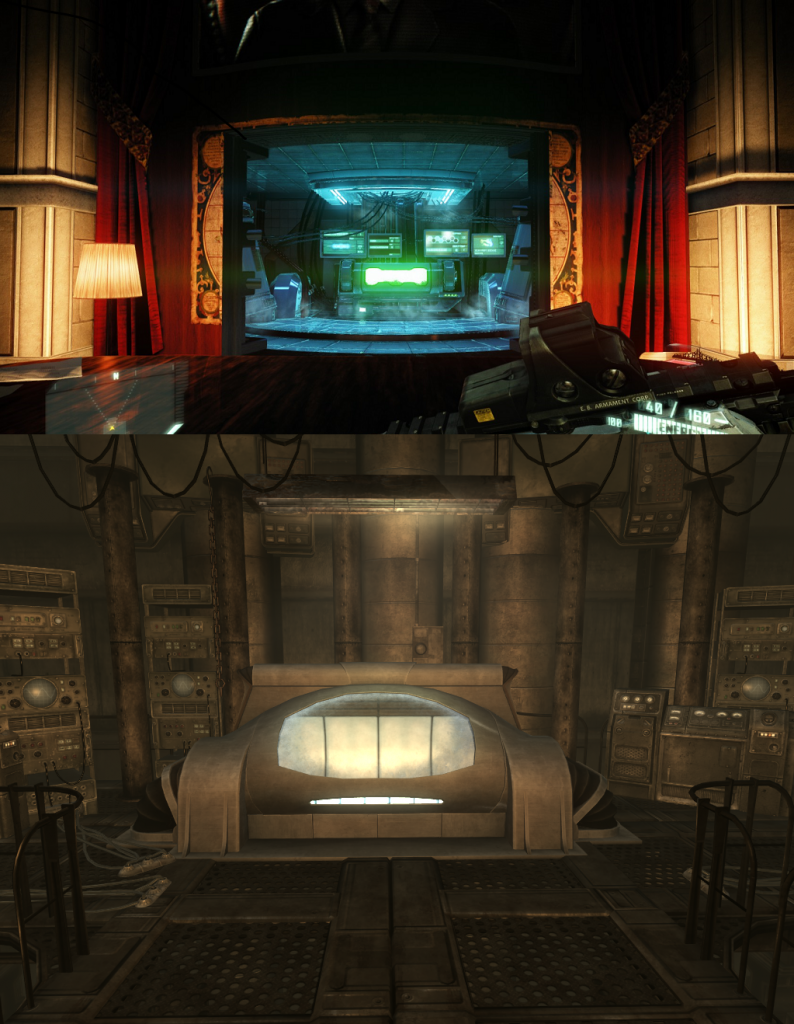 Now I put all that story together in the neatest paragraph that I could manage because the story is unveiled in nonsequential fragments, but Crysis 2 does not explicitly state that the suit is symbiotic. That is my interpretation, but what other explanation could justify Nanosuit 2.0 synthesizing enhancements and miracle cures without being told to do so? Even so, Nanosuit 2.0 is not significantly improved over the original model. The enhanced armor mode is now an active ability that drains suit energy rather than the passive default mode in the first game, and while it may feel cool to stomp around with semi-invulnerability like the Terminator with the suit’s increased density and weight, it is a necessary feature only because the majority of the options that I mentioned above in Crysis are now impossible. In other words, this addition is one made for “balance.” Stealth remains as the most useful ability even though players will inevitably find themselves in a shootout rather than assassinations. and I spent the majority of my ten-plus hours of Crysis 2 saving to upgrade it because the other abilities are underwhelming, particularly the new usages of strength. Speed is not integrated, and I never felt like I could sprint like Sonic. Reasons for using the power jump are always telegraphed and obligatory rather than an option among several for conquering the enemy, and not once did I ever find it useful to melee anything. 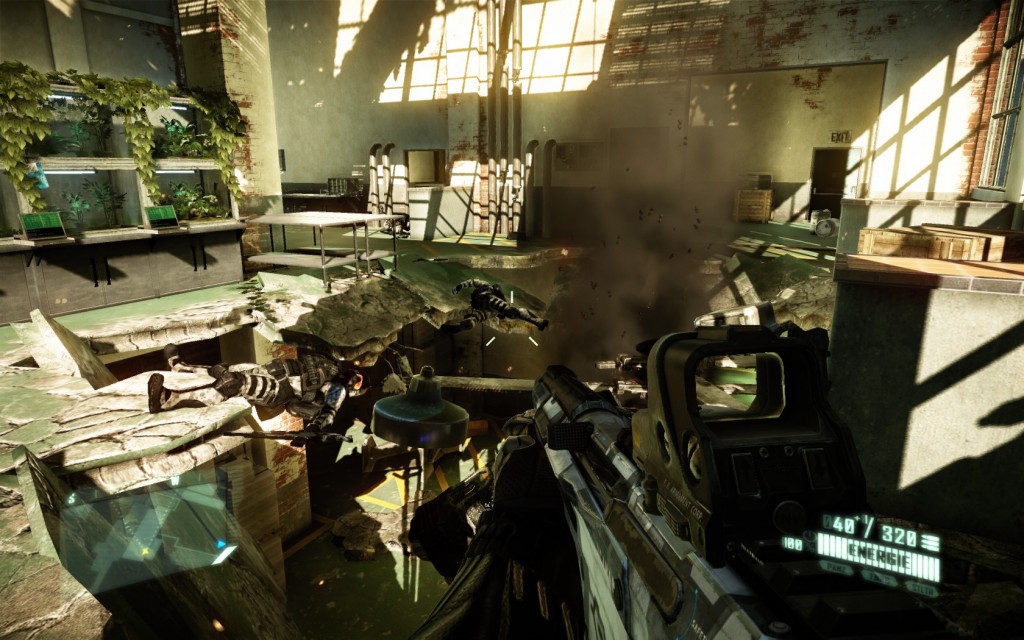 The AH50 boss fight almost made me quit the game simply because I disliked the idea of being trapped in a room to fight a helicopter when the previous Crysis games provided open spaces and opportunities to evade major encounters altogether. Rather than being expansive, Crysis 2 is constraining, and players have no choice but to use the enhanced armor to survive being bombed in this sequence.

Besides the ubiquitous covert ops soldiers, the also generic Ceph share screen time as the enemies in Crysis 2. The Yautja-like enemies are hardly threatening, and I was disappointed at how easily they are dispatched, particularly with my favorite weapon, the X-43 MIKE, which fries the insides of even the most heavily armored Ceph until they explode. I had no reason to ever use a different weapon besides my X-43 MIKE and SCAR with silencer. Yeah, that’s about as conventional as it gets, as there was nothing more interesting than a gun that is standard issue for special forces and featured in every FPS post-CoD:MW2, and a gun that was cool way back in 1996.

The design of this Ceph Stalker is blatant mimicry of a certain alien species of sci-fi lore that hunts combatants for sport, bipedal with blades and dreads.

When I find myself hoping that a game ends sooner than later, and sighing when the plot takes a turn and provides a list of objectives to make the game longer, that’s not a good look. Crysis 2 is categorically average, and I do not feel bad about waiting so long to play it, nor do I feel bad about not (yet?) owning Crysis 3.

**Feel free to make requests for me to play through games on my Backloggery for future articles in the comments. You can also hit me up on Twitter @AbsoluteZero0K.**