I absolutely hated playing through the first act of Rayman Origins. The fact that I have dedicated myself to clearing Origins, Rayman Legends, and then Donkey Kong Country: Tropical Freeze from my backlog, and in that order, did little to improve my perception of the former because it unintentionally presents itself as an obstacle preventing me from enjoying the rest of my Wii U collection, and so I outright disliked the game. I will admit that this an instance of being a pedant and certainly a too much of a good thing situation, though being “obligated” to play one game before others is not the totality of my negative feelings toward Origins. 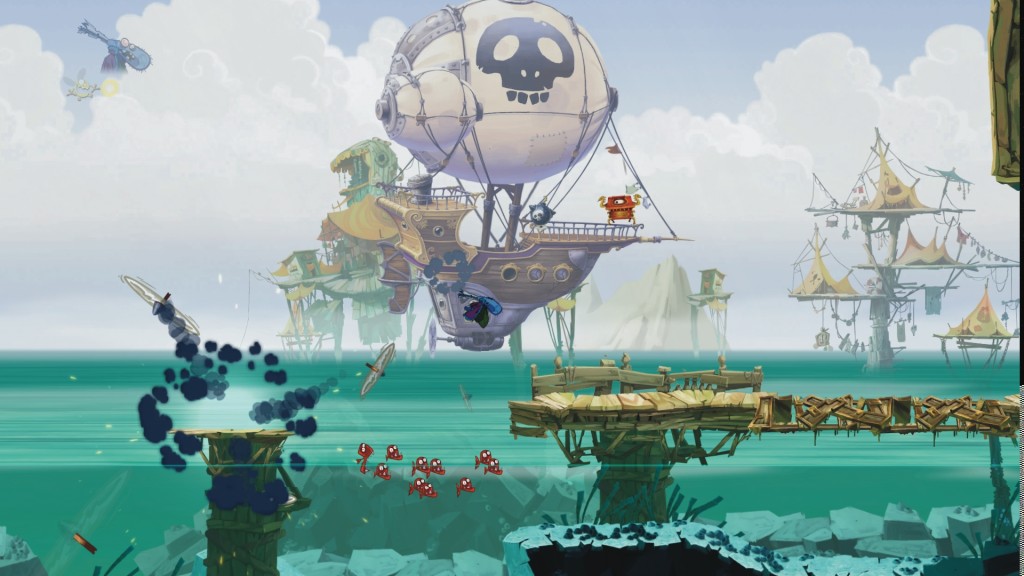 On the contrary, my greatest gripe with Rayman Origins is that it is much too comfortable with its conformity to the conventions of the platformer. I at first wondered if I was being too critical of a game that does not seek to reinvent the wheel in a long-established genre and that certain aspects are to be expected. However, I have never once been bored with a Metroid game no matter how many times Samus loses her powers which take hours to recover as is the case in the majority of those games. In contrast, the first act of Rayman Origins involves procedurally visiting one themed area at a time, gaining a “power” that should have been a basic ability unlocked from the beginning of the game such as attacking, floating, running up walls, changing size, and swimming—yes, attacking and swimming are unlockable powers. I know that “Origins” implies that this is a reboot from the 1995 original Rayman, but c’mon son!

Adding to the tedium of unlocking fundamental abilities, I found the aesthetics of Origins—the very foundations of the game—unremarkable. Don’t get me wrong; I loved the original Rayman ported over to PSX from the 3DO and still fondly remember “Harmony” as the heralding of CD-quality soundtracks in games just as I remember the game’s cartoon-like animation. It would be silly to ask for an introduction to Mario in a Mario game because of his notoriety, but we still get introductions to him nevertheless because an introduction to a character is also an introduction into their world. Observe the festival during the opening to Mario Galaxy: its introduction of the Mushroom Kingdom is something gamers expect and anticipate even if we are familiar with it. In contrast, I could simply be unimpressed by the intro to the Glade of Dreams and the wackiness of Origins in general. Maybe my initial disdain for Origins stems from the fact that the secondary characters, Globox and Teensie #1 and #2 are so generic that they triggered my PTSD of Big the Cat from Sonic Adventure. Nothing, not the art direction, the humor, the collectathon of Electoons, nor the music, clicked with me.

Nothing clicked with me until Act 2, that is. 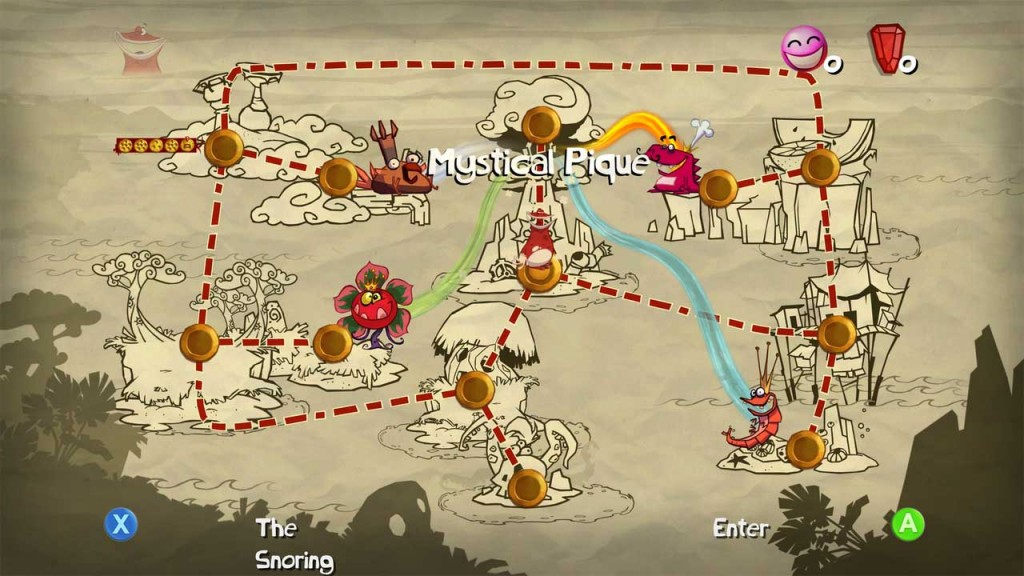 I was bored by the basic lands, but those demarked by the bosses sitting outside of them (and Land of the Livid Dead at the bottom) re-engaged me. 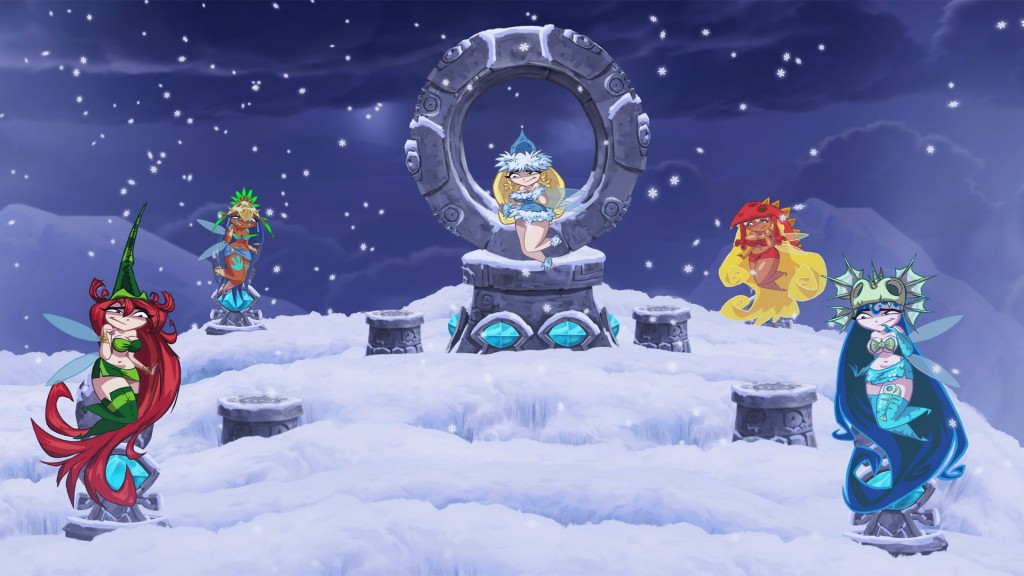 If I were to give this entry a “content warning,” it would certainly be because of the voluptuous Nypmhs whom, you must save, whom do not know how to dress appropriately for the weather.

I made a similar mistake of dismissing New Super Mario Bros Wii U by completing the first world while half asleep from boredom and then putting the game down for months before picking it up again. Turns out that it’s the best 2D Mario game of all time. Rayman Origins does not approach that caliber of greatness as it is merely a good, not great game. Still, I managed to eek out a few hours of entertainment after first disliking it. I firmly believe that Origins became appealing only after the difficulty spiked—again, like NSMBWU. The stages in the second act require players to be precise in their platforming skills because collecting enough Lums (usually 300 per level) to unlock Electoons in addition to the ones hiding in bonus stages throughout the levels becomes challenging, and I found myself often committing suicide repeatedly in order to perform certain sequences correctly in order to maximize my Lum profit, especially after collecting a King Lum that temporarily turns all nearby yellow Lums pink for double their worth. This metagame in Origins is difficult enough to remind me of the original Jak and Daxter and the kind of tricks and multiple tries necessary for me to collect all of the orbs for 100% completion. I did not strive to 100% complete Origins, but I wanted to at least unlock the best ending.

I still disliked Desert of Dijiridoos because with the exception of Journey and Sonic and the Secret Rings, I generally abhor desert settings. However, I looked forward to scaling walls in Mystical Pique, speed running through Gourmand Land, and leisurely swimming through Sea of Serendipity. The finale, Land of the Livid Dead, is one long challenging level broken down into several sections which appropriately put all of my Rayman skills to the test. The speedruns on YouTube clock the entire level in about 4 minutes. It took me an hour-plus! However by then, I was satisfied. Though I stand by my initial impression of the game as being formulaic, I did eventually enjoy the sections that ended with bosses rather than bonus level/Nymph. 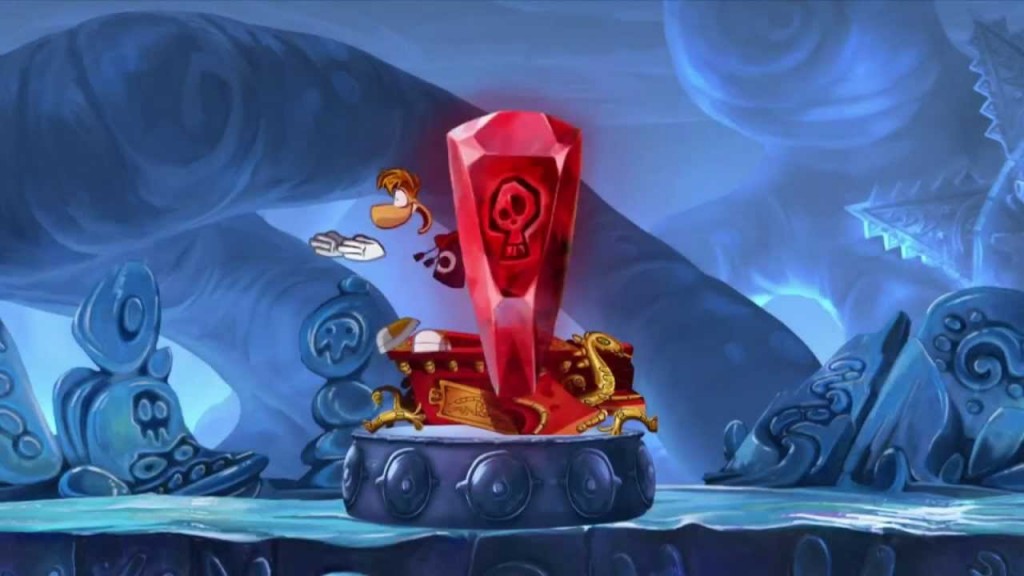 I have not seen animated celebratory pelvic air thrusts since Crash Bandicoot. How…nostalgic.

I do have to say that the music grew on me faster than the gameplay. I am particularly fond of  “Dashing Thru the Fire” (and the vocal-free version) from Gourmand Land. I feel like beats were synchronized with instances where I had to leap and dodge fire during the running sections. The Latin-themed melodies fit well with the themes of the stages.”Steampunk Suspense” from the Moody Clouds sounds as the name indicates with its clockwork-style aesthetic. I also enjoyed “Scaling the Mountains” and its nod to frolicking in the snowy lands of the Nordic. I even found “Big Mamma’s Lullaby” charming in its own bizarre way. By no means does this exhaust the great music in this game, but it’s a start.

**Feel free to make requests for me to play through games on my Backloggery for future articles in the comments. You can also hit me up on Twitter @AbsoluteZero0K.**