Backloggery Beatdown: Ico and Shadow of the Colossus Collection 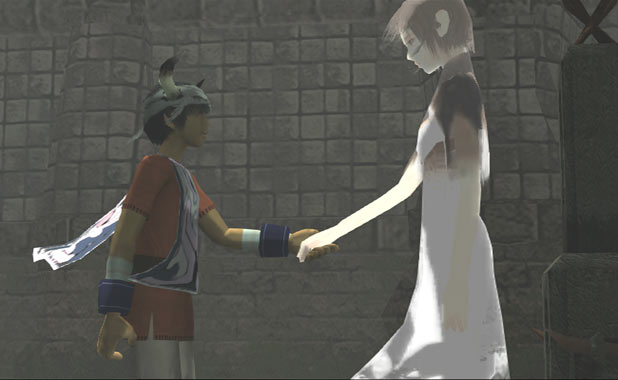 SPOILER WARNING: For those unfamiliar with my Backloggery Beatdown series, these are not reviews, but instead, clairvoyant apotheoses of gaming. The assumption of this series is that readers have already played the game, and are interested in further reflection.

“BOOORRRIIING!!!” my wife exclaimed from my rear, peering over my shoulder to the TV screen attached to my PS3 in our room. “How much longer do you have to go?” she asks, in her most convincing are-we-there-yet tone of voice.

I sigh and press on, having no idea why I am doing what I am doing in Ico. I know that the game was released two generations ago in 2001, but the template for production value for all future video games, Metal Gear Solid, was released in 1998; I find the profound contrast between the magnanimous scope of the environments and the minimalist narrative tone in Ico perplexing. I observe the opening sequence with intense concentration, knowing that when this game was released, it was received favorably, and I am trying to figure out why. A cadre of armored individuals appear to be escorting a young boy whose bandaged head features two notably protruding horns into a massive island castle only to imprison him in one of dozens of stone pods located in some sort of shrine room. By sheer serendipity, an earthquake causes the boy’s pod to fall and break without breaking the boy inside, liberating him. The only meaningful course of action that is available for me to take is to ascend a spiraling staircase. After enduring that painstakingly long climb, the boy encounters a taller, young ethereal girl locked in a giant birdcage similar that seen in a prior cutscene which featured an amorphous black blob struggling to maintain its physical integrity instead of a girl. I feel as though I was never provided a compelling reason for the act of kindness that is the boy liberating the girl, which would have been a relief since shadow creatures whose movements and intelligence resemble the Putties from the Power Rangers often inconvenience the couple by giving chase to the girl, ending the game in a greyscale flash if they succeed in capturing her within one of the floor portals from whence they emerge. 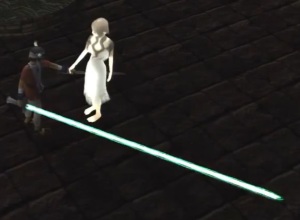 The brave souls who manage to endure Ico twice have the option to find the Shining Sword after finding the Morning Star the first time around and be treated with innuendo every time the boy holds Yorda’s hand.

Even after finishing the game,  why Team Ico would develop a game with the worst video game trope ever that is the escort mission as its crux remains an enigma to me, even after watching the on-disc developer commentaries. Was Team Ico aiming for empathetic appeal given that the boy himself was imprisoned? A demonstration of childish benevolence? Did the boy find simply find the girl, Yorda, HAWT? I do not think Ico provides enough context clues to say for sure unless I am a victim of overthinking, and the reason the boy brings Yorda along is simply because she inadvertently opens the door to the next room out into the rest of the fortress?

Again, inadvertently, because when the player leads her to the first door, her body language conveys shock and awe as energy emanates from her body to the door before it opens accompanied by a chime. I have to admit that at least in this first room, this is good game presentation. Ico is an adventure game, so some exploration and experimentation is to be expected; in order to “unlock” the rest of the game, the player must pull a lever or two, jump, climb, hold Yorda’s hand and lead her around. Implicit tutorials are almost always preferred over explicit ones, but unfortunately the rest of the game does not uphold the promises of the introduction. Ico lacks in ambiance and soundtrack. Yes, the scale of the environments is impressive considering that the original game was released in 2001 on PS2, but I still would have found the game spiritless even then. Sandwiched between scampering around large sections of real estate looking for a door similar to that in the first room are encounters with the shadow creatures which remain as unremarkable as they were in the initial encounter despite some of them growing in size and sprouting wings. I may have been impressed if I hadn’t played Tomb Raider during the PS1 era, but we’re actually talking about a game released in 2001. Even considering that this is an upscaled port, the game does not just show its age, but its flaws. 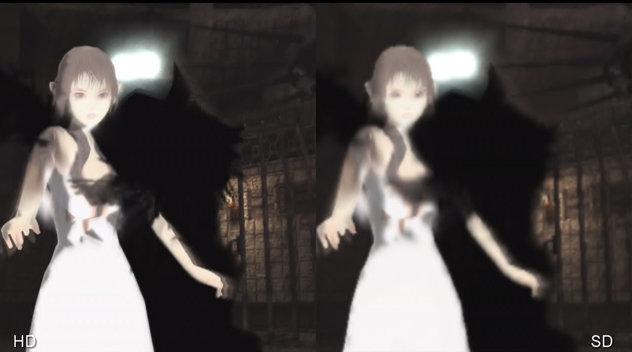 This still captures the improvement far better than it looks in motion. I was not impressed.

I spend the majority of my playtime in Ico hoping that the game will end sooner than later. I am irritated at the fact that Yorda would be of negative use, balanced to zero because she is a living tool whose presence is a requirement for escape. She is more liability than companion because as I fight, she cowers, helplessly falling to the ground more than running; if a puzzle needs to be solved, her contribution is to aimlessly wander around rooms like a toddler until I call her over, and that goading is what I find myself doing for most of the duration of the game. Here, I wish Team Ico would have taken queues from Oddworld: Abe’s Oddysee, a 1997 release that is my personal standard for all adventure games, including those in 3D.

Ico interrupts my bouts of ennui with snippets of story that produce more questions than answers. The Queen of the fortress interrupts Yorda and the boy’s first escape attempt when she blocks the door and informs the couple that Yorda is her daughter and they cannot leave and she powers down the gate so that the doors close (was it always open to allow tributes or sacrifices, Ico does not say). I then spend the following segment of the game traveling to two antipodal citadels whose function is to charge and unlock the east and west gates. Once I complete this quest over the course of several gaming hours, I return to the gate and the Queen foils another escape attempt by retracting the bridge crossed during Ico’s opening sequence. This time, she mentions that Yorda cannot survive on the outside, though since she desires to retain the girl for her own uses, I suspect it would be beneficial for her to lie. On the other hand, Yorda does show signs of fatigue the longer the game lasts up until she is all but incapacitated when the Queen decides that she has had enough of her games with the boy and turns her into stone. The game then turns into a rescue mission–or was that the game’s basic function all along,  and the purpose of the “extended escort” convention is to train players to care for Yorda in a “Well heck, I been protecting her this long, may as well finish the job!” kind of way? That is the impression that I received. Nevertheless, Yorda is now imprisoned in a state that requires a direct showdown with the Queen, once again, and the boy weaponizes himself by way of The Sword in the Stone trope.

And you’re not going to be able to escape from where you’re headed after this.

The boy succeeds, but at great cost, as the power released from the Queen upon her death blows him away, breaking his other horn (the first breaks from an earlier, similar demonstration of power by the Queen prior to their showdown), and knocking him unconscious. The ensuing procession that is the ending is vague in its transmission, which is what makes it worth attempting to interpret. There is possibly a binary relationship between the Queen and Yorda, suggested by the fact that Yorda is resuscitated as a black shadowy incarnation of herself similar to the black shadowy consistency of the Queen; it appears that one gains strength at the cost of the other, and with the Queen defeated, this new fusion awakens like a Protoss Archon and heads straight for the throne room. She–or it–picks up and carries the boy to the cavern where the Queen’s sword was located and places his body on a boat which floats away from the crumbling citadel. It is not known if the fortress crumbles because of the Queen’s death or because it is (this new incarnation of ) Yorda’s desire to eradicate her former prison. Fans of Ico probably enjoyed this sequence because of its extensive length, but I could not wait for it to be over, so when I finally regained control of an Ico awakening on a beach shore, I met this post-ending sequence with an exasperated sigh when I usually welcome them. Just as the game began with a lengthy walk before encountering Yorda for the first time, the game ends with a self-referential trek. She, too, apparently survives the castle drowning into the sea, but rather than as the obsidian cloud of a figure, she has been restored to her celestial form. Ico then fades to black. 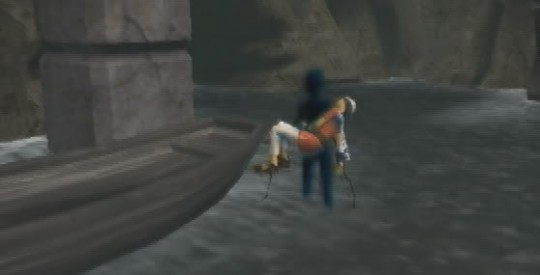 After escorting Yorda everywhere, “she” carries you to safety this time.

I confess that I have read that the ending is a possible dream sequence. If Ico and Yorda are dead, then what does it matter? Only if they survive gives license to anything resembling possible closure. A positive interpretation lends to the entourage at the beginning of the game knowing all along that something malevolent was in progress, thus a horned boy of legend was always intended to save the day. This is pure conjecture, because the game does not provide enough information, and Team Ico is content to leave players with the “intentional ambiguity” excuse in the developer commentaries. In the end, Ico tries to sell the coming-of-age trope through the budding relationship of a cunning young boy, arcane girl, sinister evil, and a mystical sword used to slay such evil. But quite frankly, The Legend of Zelda does it better.

CONTINUE ON TO PAGE 2 FOR THE SHADOW OF THE COLOSSUS!