Backlogs. We’ve all got ’em. For some, it’s an abundance of unread books creating a makeshift, homemade library. For others, it’s half of BoardGameGeek’s top 100 in shrinkwrap, cluttering 7 IKEA Kallax shelves.

OK, so I might be spilling my guts about my hoarder habits, but don’t worry, I found an effective solution. 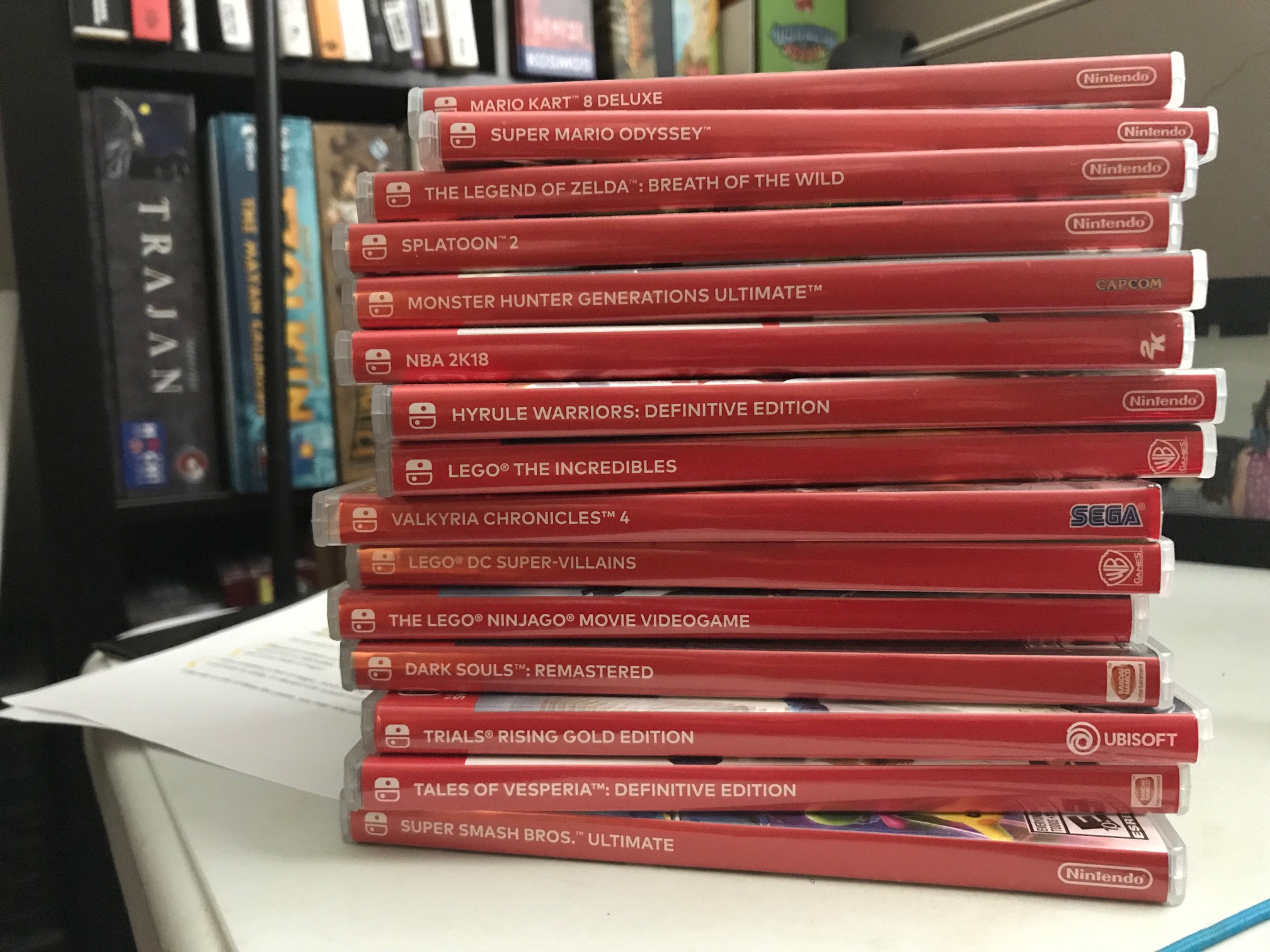 Backlog Golf is coined by Eric Bryant, a guy from a Facebook group I’m in called The #Backlog Book Club. Backlog Golf is “… designed to encourage you to spend less on games and decrease your backlog.”

Backlog Golf is played with a group of friends over the course of one year.

A backlog game is “any game owned and not beaten [main objective not finished] or completed [Platinum trophy, 100% achievements, etc]…  including games in progress.”

I mentioned Backlog Golf to a few GUG staff members and within a day or two, we started our own game of Backlog Golf. 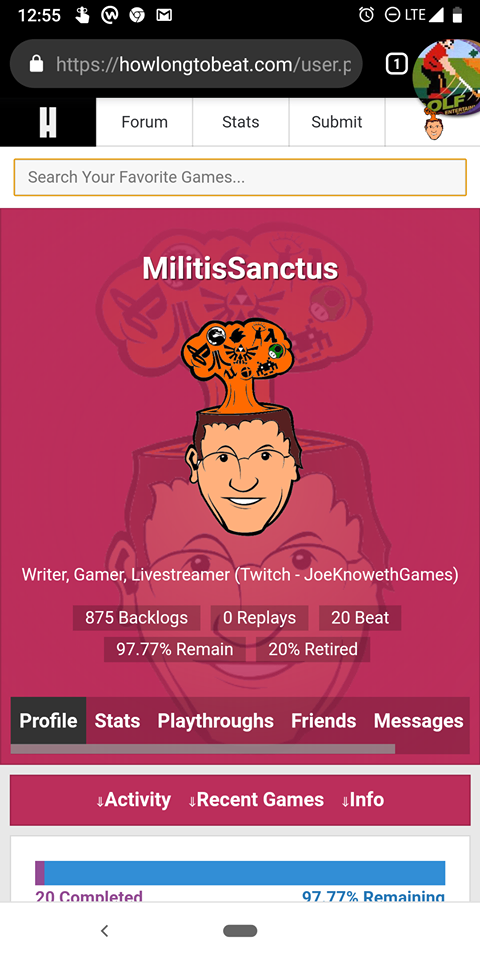 Not to rat on anyone, but uh–some of us really need Backlog Golf.

Since I’ve started, I’ve finally played through some of those indie games that have been sitting in my Steam library since 2013. Yes, I finally played The Shivah from Humble Jumbo Indie Bundle 3 or something like that. It was pretty good, too. I don’t have a repertoire of point and click adventure games under my belt, but now I’m interested in trying more. Maybe I’ll finally download Grim Fandango Remastered from another mid-2010s Humble Indie Bundle.

One of the joys of Backlog Golf is trying out games of yesteryear and getting into genres I never had considered before. Sometimes it’s because howlongtobeat.com tells me a game is only a couple hours long. Other times it’s finally playing Tomb Raider (2013) after I bought it five years ago for $5 on a Steam sale.

You know that feeling where you start four games in the period of a few weeks but you don’t play more than two hours of any of them? Or when you play half of a game, and life happens? You come back to it a year later and have to start over because you hardly remember the protagonist’s first name.

In April, I booted up The Legend of Zelda: Breath of the Wild again. I’d put in around 40 hours last year and completed three divine beasts, but I never finished it. Backlog Golf inspired me to get back into it to finish what I’d started. Granted, I decided to rush the castle and beat Ganon. -1.

I’ve even started working toward completing games. I’ve so far attained 100% in Dark Souls II: Scholar of the First Sin, Sekiro: Shadows Die Twice, Incredipede, Riptide GP: Renegade, Celeste, and Bloodborne. I’ve never been one to pursue achievements, so this is a first for my gaming career.

Backlog Golf works, and not only because you want the lowest score at the end of the year (by the way, the prize is just bragging rights). The accountability aspect of Backlog Golf is one of the biggest reasons the game works so well.

Whenever you buy a new game, beat a game, abandon a game, etc. you need to post it to your game group. This is many times accompanied by a triumphant screengrab of conquering a final boss or finally earning “The Dark Soul” achievement in Dark Souls II. Farming Sunlight Medals off Falconers in the Things Betwixt area sucks, by the way. 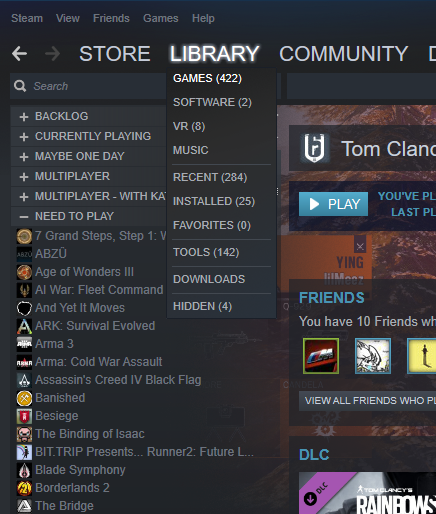 422 and counting. This doesn’t include everything I’ve bought on other consoles.

But it’s also a thing of community-building and stewardship. It’s a bit embarrassing if I go on a JRPG-buying spree because Target had a great price matching opportunity for Xenoblade Chronicles 2 on Switch. I not only add points for my purchases, but I have to show and explain those points to my Backlog groups. Sometimes I get messaged by another participant asking if the deal is still running, but usually it’s a “haha, you bought 3 games? Enjoy your +6.”

It’s a light jest, sure, but it’s also a gentle reminder we are all working toward the goal of enjoying the things we’ve been given. I love hoarding things I enjoy, and I’ve always been a gung ho hobbyist. However, I have 422 titles in my Steam backlog and I’m pretty confident I haven’t touched 70% of them.

There’s a pretty big disconnect here between calling myself a good steward of the things God has given me, and the way I treat the things he’s given me. Many times, I show dissatisfaction with what I have, in favor of newer and better things. It’s quite materialistic of me, even though I pride myself on “saving money” by waiting a year or two for new releases to drop to $10-20.

So, that said, have you long sat in front of your game library, feeling ashamed at your growing list of unplayed games? Ever get stuck wondering what game to download and end up spending three hours scrolling Reddit instead? Do you play too many multiplayer games and miss out on enjoying so many engaging single-player titles?

Don’t worry. I’ve done all of those things, but it’s never too late to switch things up!

Find a group of friends and get golfing!

If you need inspiration check out the image gallery below of some of our staff’s finest and proudest Backlog Golf achievements.