Last month, I discussed Bioware’s treatment of their religious characters, specifically looking at Mass Effect Andromeda’s Suvi Anwar and Dragon Age II’s Sebastian Vael. While these two characters served to comment on many issues relevant to Christianity, they were by no means the only religious characters Bioware has in their games.

With that being said, I thought it would be interesting to discuss two other characters and how their religious views are presented in their respective games. These two characters are Dorian Pavus of Dragon Age: Inquisition and Thane Krios of Mass Effect 2 and 3. It should be noted that Dorian and Thane’s beliefs have less direct parallels to Christianity than Suvi and Sebastian. Therefore, this article will serve more as a general discussion of their beliefs with occasional divergent discussions relevant to Christianity.

Be warned that this article will have spoilers for both characters’ stories. 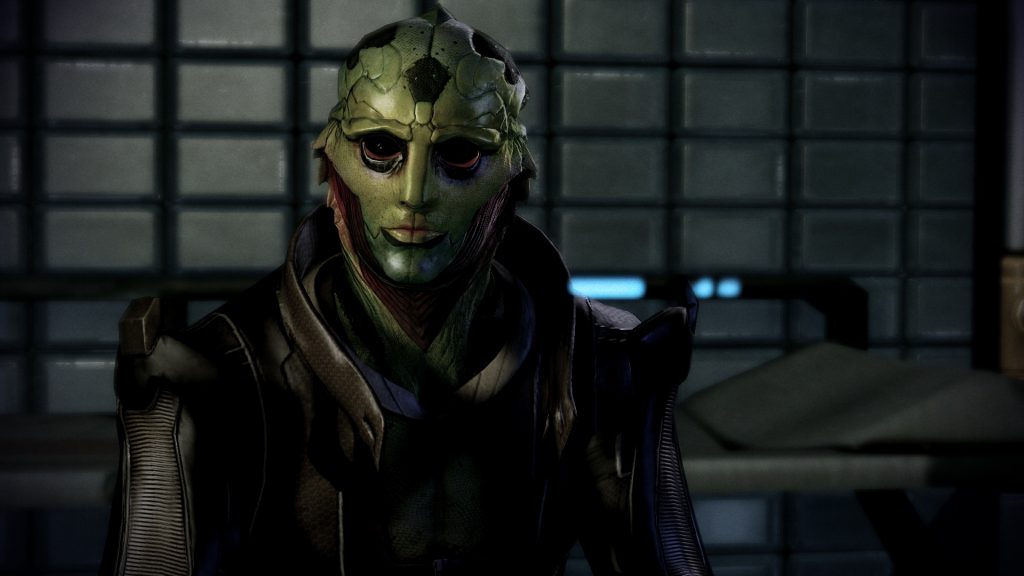 Thane, a member of the drell, subscribes to a set of beliefs that is unique to his species. His belief system goes unnamed throughout the  original Mass Effect trilogy, but several tenants of it are revealed. Firstly, it is polytheistic, including at least 3 gods: Arashu, goddess of motherhood, Amonkira, the god of the hunt, and Kalahira, the goddess of the afterlife and oceans. Secondly, the drell believe that the spirit and body are entirely separate entities. When the body dies, the soul leaves. This ideology is what allows Thane to be an assassin as he believes that his body is simply a tool for others to use. He is no more responsible for the people that he kills than a gun would be. Despite this, when the protagonist, Commander Shepard, first meets Thane after one of his assassinations, he is praying, noting that “prayers for the wicked must not be forsaken.” Shepard assumes that Thane is referring to his victim, but he clarifies that he is referring to himself as wicked. Whether Thane is praying for forgiveness because he really does believe he holds some amount of responsibility for his killings or he just believes that he is inherently wicked is unclear.

Thane’s belief that he is not responsible for the people he kills was initially not very strong. In an early assassination attempt, the woman who would become his wife stepped in front of his target when she noticed Thane was trying to kill him. At that moment, he remembers feeling, “unfamiliar emotions…Guilt. Shame. Regret.”* Wanting to start a life with her later down the line, he asked to be released from his contract. Upon his request being granted, the two married and had a son. However, when he realized he was unskilled in any traditional occupations, he decided to freelance as an assassin. He recalls that his wife understood, saying that “She knew [his] soul.” This reinforces the drell belief that the soul can be pure despite what the body is doing, showing that at this point in his life Thane no longer felt guilty about his assassinations. About one job in particular he thought “…my conscious mind slipped away from my body…and I was content to let it.” 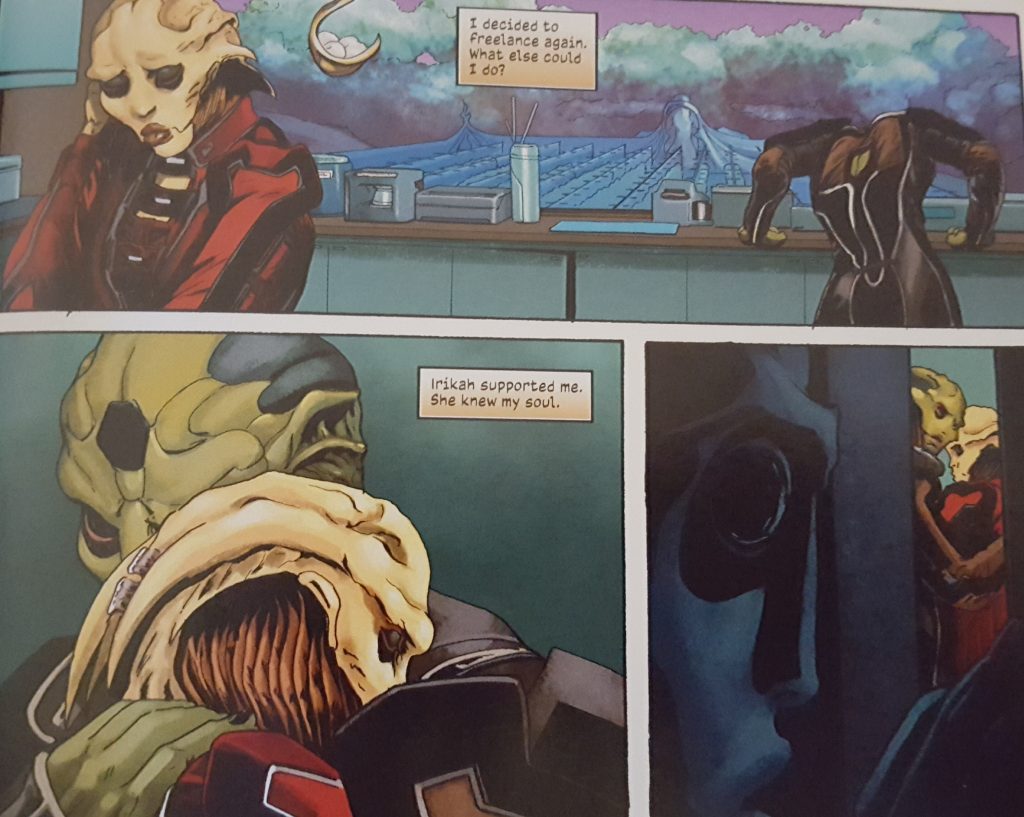 Years later on Thane’s deathbed, Kolyat, Thane’s son, asks Shepard to read a prayer to Kalahira with him. Regardless if Shepard agrees to participate or not, the prayer is read. It reads:

Kalahira, this one’s heart is pure, but beset by wickedness and contention. Guide this one to where the traveler never tires, the lover never leaves, the hungry never starve. Guide this one, Kalahira, and he will be a companion to you as he was to me.

Depending on the gender of Shepard, s/he will ask for clarification about the prayer. If Shepard is a man, he will ask Kolyat why, if Thane’s last moments were that of a hero, was he was praying for forgiveness. Kolyat then tells Shepard that “his prayer was for you.” This conversation implies that Thane and Kolyat believe salvation can be earned by good deeds.

Thane’s beliefs are contrary to Christianity to be sure, but that doesn’t mean that there aren’t a few moments to look out for. The concept of the soul being separate from the body is consistent with Christianity, though the concept of the one’s actions not affecting the soul is not. Thane’s prayers for his own wicked self are key too as humanity is inherently sinful, and Christians often pray prayers of forgiveness to God. The prayer on Thane’s deathbed is also very interesting as despite the fact that he was dying, Thane’s primary concern was for Shepard’s heart. This is the kindness and concern for others that Christians should exemplify. 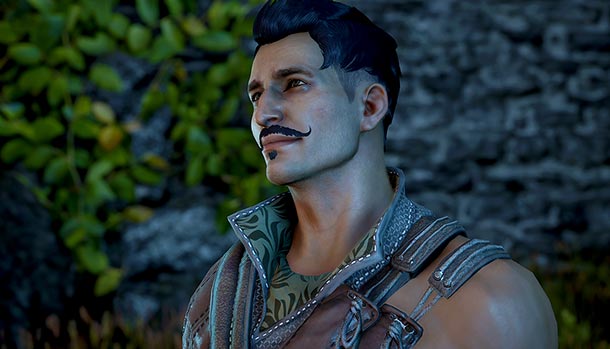 Dorian Pavus’s beliefs on the other hand, center around the same belief system of Sebastian Vael, that being Andrastianism (a fantasy parallel of Christianity). Dorian comes from a different region of the world, Tevinter, in which a different denomination of Andrastianism exists. This, of course, colors his perception of the faith system as a whole. While Dorian will not say much on the subject through normal play, he will discuss it in great detail should the Inquisitor wish to.

• All Chantry (church) leaders are men, whereas they are women elsewhere.

• The verse “magic exists to serve man, never to rule over him” is interpreted differently to mean that mages can serve by being good leaders.

• Mage training is done through prestigious academies rather than prisons intended to contain the threat of magic.

• Templars exist to be soldiers, not a specific group trained to dispel magic

• Andraste is believed to have been a mortal woman, not the Bride of the Maker (God).

The differing opinions on whether men or women should be the ones leading the church is a very pertinent issue as it’s one that still can divide Christian churches to this day. Different interpretations of verses is also a very common issue that arises in present day churches as can be seen in the aforementioned debate about women in leadership positions (among other topics). Dorian even brings up that many women in Tevinter are upset with the idea that all church leaders must be men. Dorian says the reasoning for these gendered leadership positions is “…because that’s how it has always been done,” before quipping sarcastically, “excellent reasoning.” This highlights an important facet of faith: that it’s important to understand why you believe what you believe. 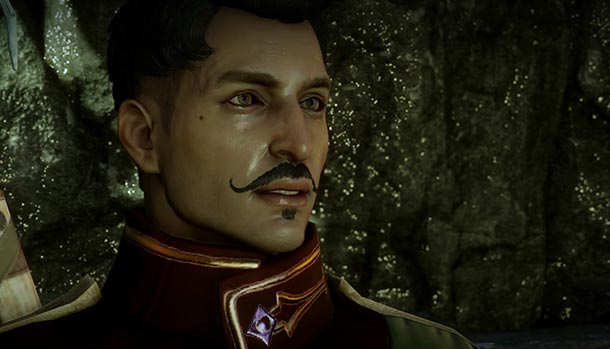 When asked if he is Andrastian, Dorian responds, “It might surprise you that I do consider myself Andrastian. I simply do not believe in the Chantry. It is a relic, whether back home or here in the south―something from a bygone age desperately clinging to relevance…I’ve seen too much to believe I know everything. The world is bigger than I, even bigger than you. It laughs at all the things we think we know. The Maker doesn’t need me to believe, but I do.”

This bit of dialogue highlights how many people do feel burned by the church. They want to believe in God, but have experienced things from the church body itself that have turned them off from the religion. Church politics and traditions can get in the way of leading people salvation. Bioware wrote a character of faith like Sebastian who is very fervent in his belief, Dorian instead serves to represent the group of people who want to believe, but are bogged down by the pride and hypocrisy sometimes demonstrated by the church. Both are relevant and necessary representations.