He's such a lovely robot, he's such a tip-top bloke, and if it weren't for claptrap, your life would be a joke

In the first major DLC expansion to Borderlands: The-Pre Sequel, Gearbox and 2K Australia deliver one of the best experience in any Borderlands game to date. Claptastic Voyage is no mere money-grab, as many players complained about the Holodome expansion. Instead, this DLC is chock-full of narrative significance, new weapons, new locations, challenging new enemies, and some key revelations about the lovable Claptrap told through allegorical manifestations of his subconscious. To think that all this time you assumed robots didn’t have feelings!

Following the events of the main story line of Pre-Sequel, Jack, now officially known as the dastardly “Handsome Jack” from the Borderverse’s latter chronology, follows all possible avenues to consolidate his power, and some of those avenues lead to strange and unexpected places.

Handsome Jack calls his mercenary cronies to the mysterious Deck 13 1/2 aboard Hyperion’s Helios station. After scouring the guts of Helios’s engineering tunnels and doing just a tad of creative jumping, the antiheroes enter Jack’s secret lab where he takes a play out of Tron’s book: he wants to “digitize” the vault hunters and send their digital projections into the depths of Claptrap’s mind to retrieve the late Tassiter’s super-powerful “H-Source” file, which will grant Hyperion’s megalomaniacal new CEO even more power to crush any and every one attempting to roadblock his burning, bloodied path to glory and order. 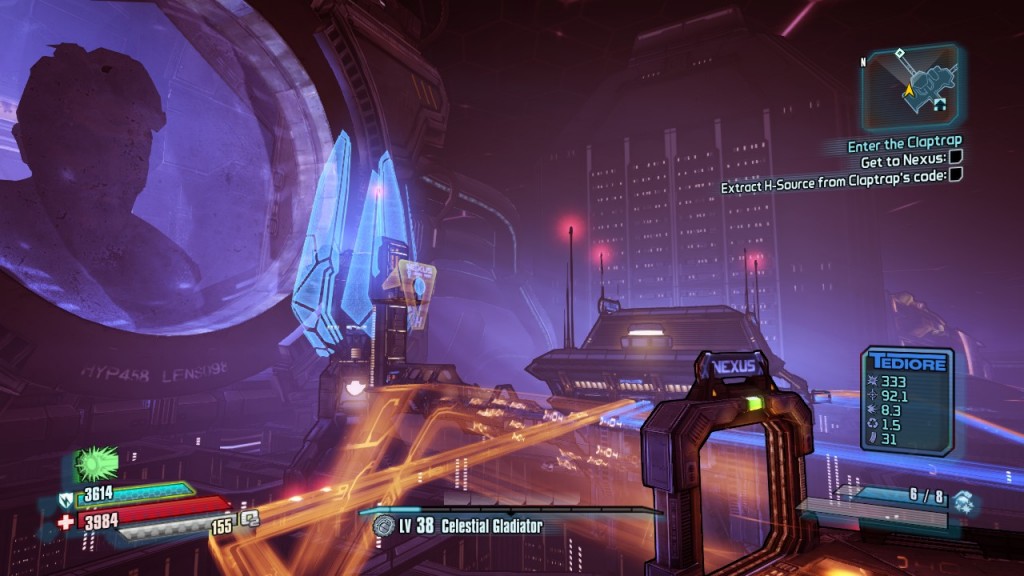 Cataracts of this severity will require the expertise of an Opthalmologist. (That’s Handsome Jack from behind Claptrap’s eye.)

Of course, it would be no fun if everything went off without a hitch. After fighting through malware, spyware, viruses, and the digital equivalent of white blood cells, the H-Source vanishes from your grasp, and you’re forced to delve deeper and deeper not merely into the Tron-esque “Nexus” and “Motherlessboard” zones, but into Claptrap’s embarrassing allegorical “memories” where we see more and more why pretty much everyone insists on mistreating him despite his upbeat and friendly demeanor.

After joining forces with a rogue program to undo Tassiter’s defensive subroutines, you are (predictably; I think one of the characters even jokes about how predictable it is at one point) betrayed by said rogue program who in fact wants to take over all of Claptrap, eradicate human life, and conquer the galaxy. Jack of course never cares about anything more than getting that H-Source,  but if you’re questing as one of the “good” playable characters, your more noble goal is to stop this rogue AI from killing everyone.

And so you chase this rogue program into Claptrap’s Subconscious and Sub-Subconscious, where you learn more about Claptrap’s personal feelings about being berated all the time, and the landscape becomes more and more farcical, like a twisted, modern version of Alice in Wonderland. 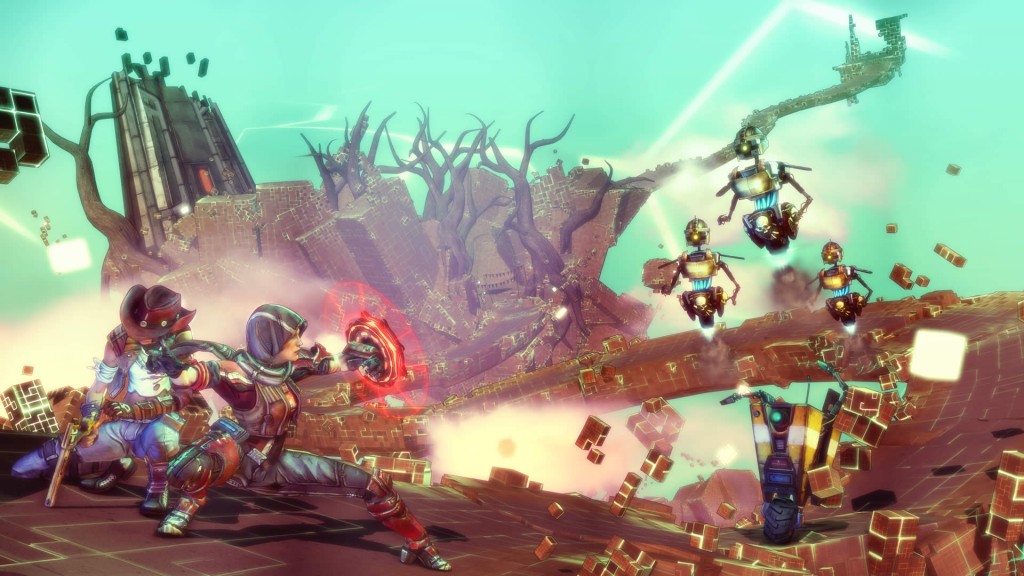 You take the blue pill, the story ends, you wake up in your bed and believe whatever you want to believe. You take the red pill, you stay in Wonderland and I show you how deep the rabbit hole goes. (Image from the official website.)

You finally come face-to-face with this rogue program, and after the most heinous battle I’ve ever experienced in a Borderlands game (it took about an hour), are awarded with the traditional loot drop before returning victoriously with the H-Source and handing it over to Jack.

I won’t spoil what happens in the conclusion. Suffice it to say we learn how Claptrap ends up as the only working Claptrap unit on the frozen surface of Pandora’s Southern Shelf region. It is a surprisingly sad and moving sequence that makes a tremendous contribution to the overall lore of the Borderverse and further links Pre-Sequel with Borderlands 2. 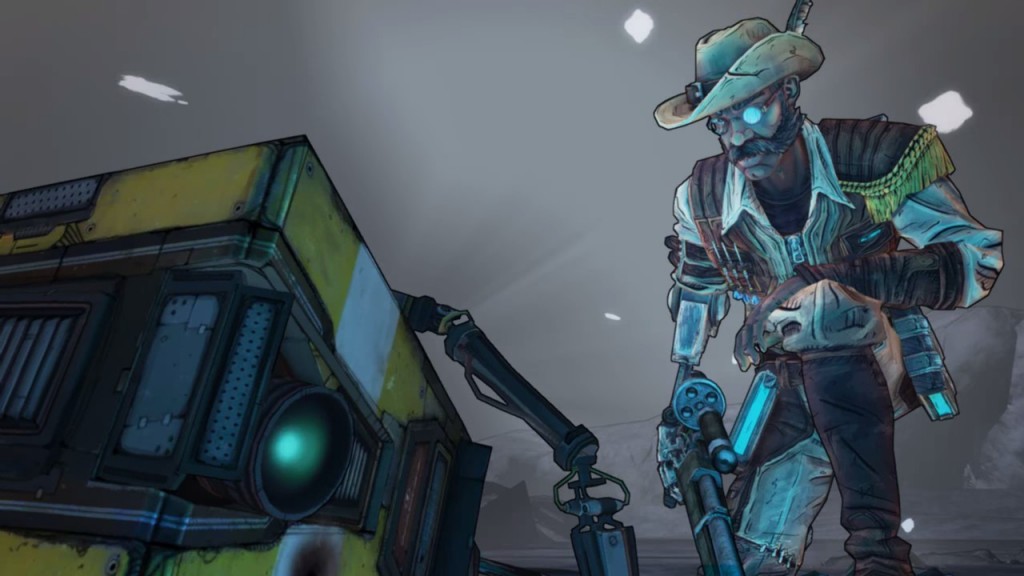 Why, oh why, didn’t I take the blue pill?

Nothing tremendously different from any of the other Borderlands games. In fact, since all the enemies are technically digital projections, no one actually “dies” in this DLC, and there is no gore, either. The one character who dies (in a memory) has a conspicuous “CENSORED!” bar thrown up before he’s crushed by a giant meat press. Coarse language (everyone is always calling everyone else and their mother is an “a****le” in the Borderverse) continues to be a factor, but with the lack of “actual” death and the complete absence of Mad Moxxi, both violence and sexual innuendo are at an all-time low for a Borderlands game. I’m truly at a loss, here.

For more in-depth appraisals of the content of the Borderlands franchise, see the content warnings in my reviews here and here.

Claptastic Voyage does not tremendously change the Borderlands experience. Instead, it reuses some of the content from previous iterations, tweaks them, and weaves them into the game. So the mechanical dog programs who run you down bear a close resemblance to skags, and some of the “virus” and “malware” enemies leap and charge at you very much like the bullymongs of Borderlands 2.

There are novel foes, though. The “viruses” are challenging mobile tanks that pelt you with elemental damage from afar and adapt their attack patterns according to yours. Shoot them with corroding shots, then get ready: now it’s a corrosive virus immune to your attacks that hits you with corrosive explosions. This can get frenetic with elemental barrels and several viruses charging at you simultaneously.

The new “glitched” weapons are an intriguing addition. On top of being overall of good quality, glitched weapons will randomly change attributes in mid-combat. So my Jakob’s glitched sniper rifle, on occasion, turns in a rapid auto-firing machine gun that does all the damage of sniper rifle with a much higher DPS rating thanks to the increased fire rate. On top of that, the ammo is drained by about one bullet per three seconds while firing, so I could mow down hordes of foes thanks to the “glitch.” Similar randomized effects turn shotguns into elemental shotguns, or pistols into shotguns, or submachine guns into sniper rifles.

Be prepared for a table-flippingly-challenging series of boss fights, especially on True and Ultimate Vault Hunter modes. Three games into the main series, Gearbox ain’t messing with you no more. Even if you’re on-level with the bosses, there is a good chance the digital floor is gonna be mopped, buffed, and re-buffed with your face. Be prepared for giant bosses one or two-shotting you, hordes of spawned mobs distracting you while the boss’s shields recharge (a bleed or elemental DoT effect will be very helpful in this regard) and arenas with death pits and lakes of digital fire that are nearly as deadly as the enemies themselves. Without help from some friends or PuG allies, you may find the experience…unpleasant. Painful. Frustrating. Y’know…uh…your housemates might pop their head into your room to see why you’re grunting and snarling at your computer screen. That sort of thing.

Presentation is one of the strongest aspects of Claptastic Voyage.

As far as I can tell, it seems that a lot of the textures and models are recycled from the main story lines and DLC content from previous games, but all the textures, even ones that look like medieval castles (from the Tiny Tina DLC from Borderlands 2) are infused with glowing, digital lines that pulse like electric Tetris grids. Enemies fade and crumble into blue-white digital cubes in a fashion that is again reminiscent of the “deaths” portrayed in Disney’s Tron films. The world bends and twists into an absurd, nightmarish nether – think the upside-down hallway in Ocarina of Time’s forest temple – as you go deeper into the darkness of Claptrap’s electronic psyche, and the mood and music respond appropriately.

It should go without saying by this point that all the voice acting is phenomenal. If you’ve read anything else I’ve written about these games, you know my feelings on this. Par for the course; no complaints here. The actors are still weaving the dream.

Music continues to be a high point. The tracks inside Claptrap are predictably mysterious and electronic, in line with the space rock aesthetic already established in this installment of the series. A surprising and humorous departure from the expected is one track in particular from one of Claptrap’s fudged memories, were he made himself believe a lie to cover up the awful truth of an event that took place on Pandora.

In addition to being an immersive and just plain fun DLC, I was pleasantly surprised at the writing in Claptastic Voyage. This doesn’t just feel like a side-adventure with negotiable canonicity. This is a real turning cog of the Borderlands story. On top of that, the writers took care to give the player a more serious appreciation for Claptrap, who for two games has been treated like an annoying sidekick by essentially every major character in the franchise. This DLC succeeds at showing everyone to be real jerks for not attending the little guy’s birthday party and showing why Claptrap wants to get at Handsome Jack so badly in Borderlands 2.

This is an essential piece of DLC for anyone who owns Pre-Sequel. And at just under ten bucks for a price tag, you can afford to lay off a few visits to Starbucks to pick this one up….MINION!

The .gifs, music, and images in this post are the properties of their respective owners.

Agree? Disagree? Something nice to say? Leave it below.

Don't be mislead by the goofy presentation: this is a must-own DLC pack with quality music, a legitimate addition to the overall Borderlands story, and plenty of challenging fights that will push you beyond anything else you've done in the Borderverse.