This last week I was invited to join in a special play test of the new Massive Online Battle Arena (MOBA) Games of Glory with the developers at Lightbulb Crew. I want to thank the team for the amazing opportunity they have given me and the amazing game they are producing.

At first, I was a little lost when we loaded into the game. The teams were on a shared Skype call so we could ask questions about game play and throw out any input during the test. Characters have two weapon slots that can be equipped with a ranged weapon, or a melee weapon. By default players start with their fists, but characters can acquire and upgrade pistols, shotguns, rifles, as well as other glorious weapons to aid in the struggle for victory. The round had begun, and so had my confusion. The interface looked and felt like games I had played in the past, similar to DOTA2 or League of Legends, with branching upgrade trees for weapons to improve my character. I selected the shotgun and proceeded to march to the battlefield.

As soon as I found some neutral AI minions I could destroy, I fiddled with the controls. I learned that the weapons are actually direct fire! You point in the direction you wish to direct your fury towards and fire away. This was a shocker, and made me realize this game was going to be interesting. Our team proceeded to use our abilities and fight to destroy the enemy base, stunning, exploding, and rolling over our opponents.

The graphics are very sci-fi themed, with aliens and high tech weapons galore. The one map that was shown to us had arrays of shield generators, energy walls, and many effects. The map we played on had a great design, allowing for interesting fights, dodging around corners to evade enemy fire, and teleportation pads to get across the map. Particle effects coming off of weapons and abilities looked very well refined, with distinctive colorings and patterns to indicate what is going on. 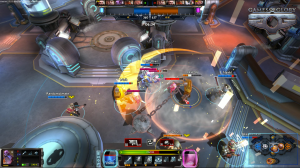 Underneath the game’s beautiful exterior, there is an underlying plot to the game that lorists will enjoy. Players handle Clones that battle in a coliseum and are selected for combat to settle intergalactic disputes on behalf of different empires and clans. It is not known how much the game’s story will effect future game play, but it was revealed to those of us in the test session that more maps will be made with new stories to accompany them.
Overall, I was very impressed with where the game was going and how well it handled. The game will need to be tweaked and balanced continually, part of the never-ending cycle of developing a MOBA. The combat mechanics are a fresh change of pace from the intricate laning stages of other MOBAs. It will take time to find the balance and optimalization for the game, however glorious it will become.

Want to learn more about this game? Head over to their website Here!

Special thanks to Lightbulb Crew and the invitation. God bless and make this game grow!