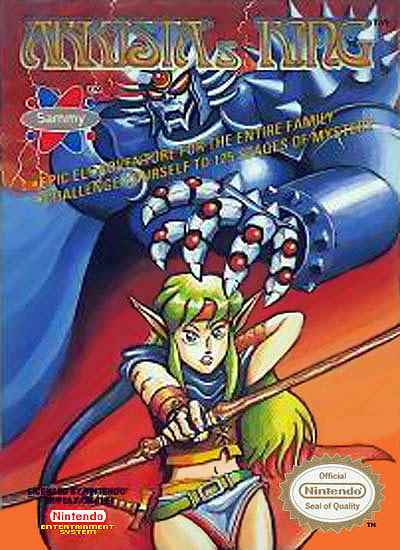 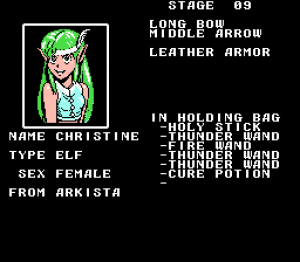 No complicated inventory management on this status screen!

The peace of the Elven Kingdom has been shattered. The Elven Ring of Arkista, the kingdom’s most precious and mighty relic, has been stolen by an evil overlord known only as the Shogun. Without its serene power, birds don’t sing, monsters run amok, and the kingdom is plunged into terrible darkness, in which evil thrives. The Elves’ only hope is a champion, a warrior-maiden named Christine, whose proficiency with the longbow is unparalleled.

The journey to the dreaded Ninja Dungeon will be a perilous one, through unforgiving, labyrinthine terrain filled with nefarious monsters. 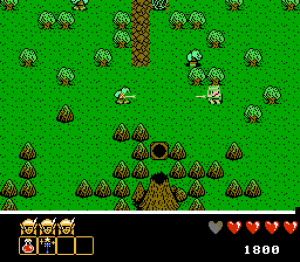 Unlike Link, your quiver is fortunately bottomless. Fire away!

Arkista’s Ring is a top-down action-adventure game, much like The Legend of Zelda, but that alone represents 90% of the two games’ similarity. Christine’s primary means of attack is her elven longbow, and unlike Link, she has unlimited ammunition. Enemies will also occasionally drop useful items, like magic wands that shoot fire, pieces of armor that help her defensively, or healing potions. Additionally, Christine will obtain upgrades to her bow, which will increase the range of her arrows and the damage they can inflict. Finally, while your inventory space will gradually increase as you become stronger, it is ultimately limited, so divide your space judiciously.

Christine’s quest spans 32 completely linear levels, that encompasses fields, forests, castles, dungeons, tundra, and crypts. The object of each level is to defeat enemies until a key appears, which will unlock the path to the next level. Working your way through to the Shogun culminates in an epic battle, which upon winning, transports you all the way back to level 1. That’s right; you go back to level 1. However, you will find that the enemies are faster and tougher than before. You just completed the game on ‘easy’, and have been instantly moved to ‘normal’. This cycle will repeat until you reach level 128, which is the end of the 4th loop. When you defeat the Shogun on ‘very hard’, you will finally get your long-awaited ending.

On a final note: There is no save feature at all, but you have 10 continues. Best of luck; you’ll need every one of them! 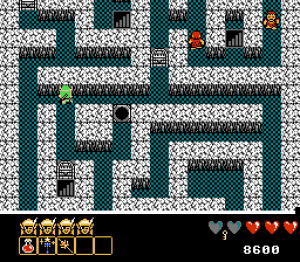 Sometimes there is more than one exit. Or is there?

Visually, Arkista’s Ring is pleasing, if simple. Interestingly, despite being the game’s protagonist, the enemies are actually slightly better-detailed than Christine herself. And does this game ever have enemies! They like to come at you in a lot of different mixed groups. This will force you to change up your tactics on almost every screen, as certain enemies fall prey to different attack styles. Some enemies can only be defeated, or are only defeated easily, with a certain item, but I’ll let you figure that out for yourself.

The environments are actually very diverse. While some of the sprites are palette-swapped, they combine with other environmental elements to create believable surroundings. The instruction manual has a crude map of all the major waypoints of Christine’s journey. While playing, the designers really give you a sense that you’re moving through a larger world, instead of just 32 separate screens. 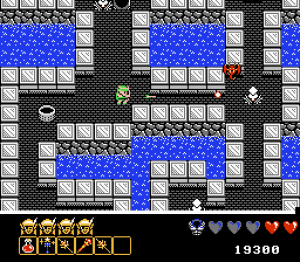 For some reason, I loved playing this screen more than any other screen.

Arkista’s Ring has, including the title theme and ending theme, six music files. That’s roughly the same number as the original Super Mario Bros. and The Legend of Zelda. Since this game was released in 1990, a fair number of years after both of these iconic titles, one would expect a greater variety of background music. However, the music provided is both memorable and fitting. Plus, Arkista’s Ring mixes it up a bit. You may play a couple levels with one theme, then move on to play a few levels with a different one, then later play another level or two with the first theme.

Outside of the generic fantasy elements of this game like elves and magic, there’s not much to write home about in terms of spiritual conflict. Enjoy!

Arkista’s Ring is considered to be a poor Zelda clone by many people. However, I feel this game stands on its own in presentation and quality. While clearly not on the level of other 8-bit classics like The Legend of Zelda and Metroid, it certainly deserves an honored spot in any collector’s case. It’s a great game to pick up, pop in, and kill 20 or 30 minutes, since you don’t have to worry about saving your game anyway. 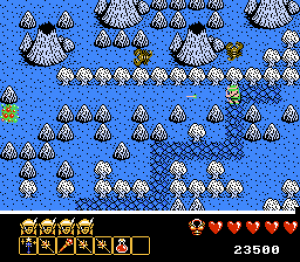 Some creatures are not susceptible to your bow; try magic!