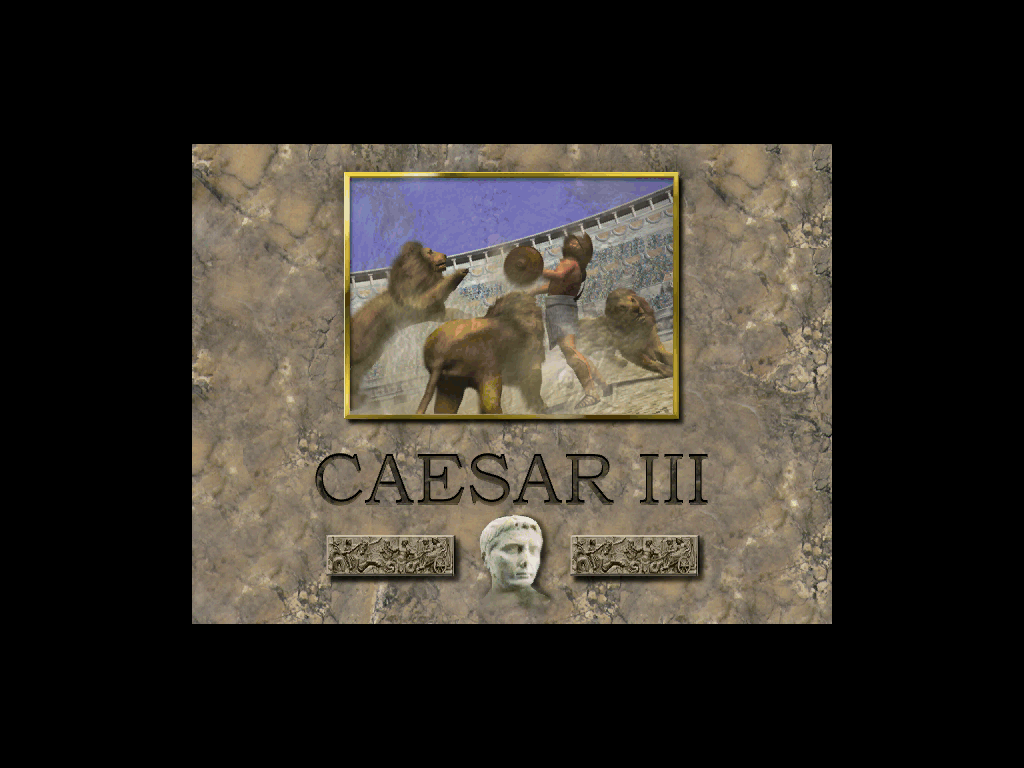 “Central Italy; 750 years before the birth of Christ.” 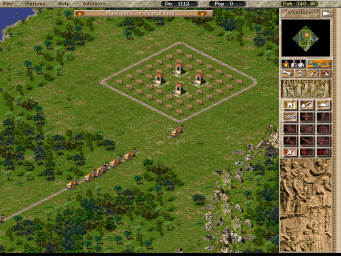 Placing plots for new housing will usually net you a flood of eager immigrants.

Participate in the construction and defense of one of the greatest empires in history. You begin as a lowly new governor, tasked by Caesar with building a new settlement in order to expand the borders of Rome. Once you’ve proven your aptitude for governance, you are brought forth to take on a more strategically important assignment. Caesar, or his Proconsul at times, will give you detailed instructions about each new city, and the achievements you are to attain. As you fulfill the emperor’s increasingly complex demands, you will ascend the ranks of Roman nobility, gradually gaining the emperor’s acclaim and personal confidence. Eventually, Caesar may find you worthy enough to take up the mantle of Roman Emperor for yourself…

Unlike Caesar II, there is no province management layer. In each assignment, you are responsible for your city, and your city only. 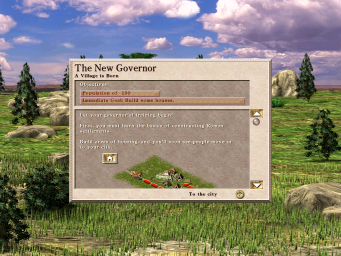 You’ll receive instructions from either Caesar, or his Proconsul.

In the case of most assignments, you will begin with an empty tract of land on which to build your new city. The core of any settlement involves seven things: plots laid for people to build housing, farms to produce food, a granary to store the harvest, a market to distribute the food, an engineer’s post to ensure the integrity of the buildings, a prefecture to monitor crime & fire risk, and a clinic to help keep your populace healthy. This is the minimum amount of infrastructure necessary to keep your city going. However, you will not impress the emperor by building a bare-bones city. Additionally, you will often have to work around the terrain as you plan your city’s layout, clearing trees and bridging rivers. Furthermore, you may have to contend with wolves or barbarians, that will harass your citizens if not dealt with properly. 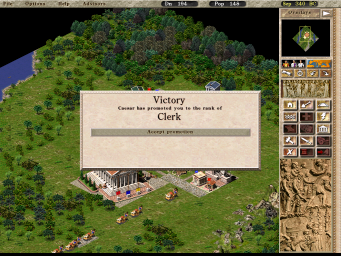 In future cities, you are given to option to continue governing if you’re having too much fun!

As you work your way through Caesar’s governing appointments, you will gradually gain access to new buildings. The buildings are categorized by function for your convenience. These include water structures, security structures, military structures, entertainment structures, and many more. In most cases, you must make sure that your citizens have ready access to these places. On the flip side, there are certain structures that people absolutely hate living next to, because they are noisy, dirty, or just plain ugly. These include, but are not limited to, military structures, reservoirs, granaries, wheat farms, and workshops.

Building the senate–available from your first assignment on–gives you a place to store your denarii (money), and also gives you your ratings at a glace. You are measured in 4 key areas: culture, peace, favor, and prosperity.

In addition to your four ratings, you can also see the percentage of your unemployed plebs, as they crowd and clutter the steps of the senate. This can also negatively affect your prosperity rating. 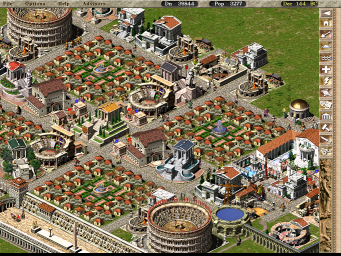 You may find yourself running out of space if you do not plan carefully.

The artwork in Caesar III is quite pleasing to the eye. The colors are vibrant, and the environments are drawn beautifully. The animation of citizens is a dramatic improvement over that of Caesar II, and they will move around the streets of your city, going about their daily grind. There are herds of animals that inhabit your territory, occasionally wandering into your city. The rivers flow, and their direction can be ascertained by the flotsam. The buildings themselves are incredibly detailed, and seeing a screen full of buildings in a prosperous city is a sight to behold.

There are also FMV clips that will play between assignments, and during the opening and ending credits. These are every bit as colorful as the strategy maps, but are about as realistic as you would expect for a Windows 98 game. 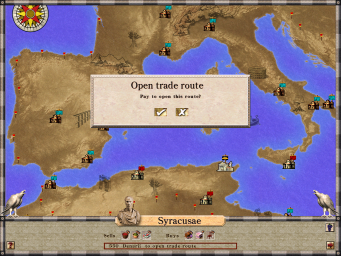 As the empire grows, so to does the potential for lucrative trade.

The background music of Caesar III is phenomenal. It starts off very serene and temperate. As your city grows, the music will change to reflect various population milestones. Each new iteration becomes more grandiose than the last. You truly feel waves of ancient Roman magnificence wash over you as you listen to some of the more orchestral pieces.

Perhaps considered cutting-edge for the time, Caesar III also has ambient sounds. You can hear sweeping winds, rustling trees, babbling water, and of course, the sounds of your city running. These sounds change based on your view. If you scroll far away from your city, you will receive more environmental sounds. If you are directly on top of your city (where you should be most of the time) you can hear people bustling, children playing, audiences applauding, and industries booming.

There is also quite a bit of voice-acting involved. During your scenario instructions, Caesar, or occasionally his Proconsul, will tell you about your mission and what to look out for. When you right-click on one of your citizens, the game will pause, a text box will pop up, and they will talk to you, giving feedback that reflects there current state of affairs in your city. There is a good mix of voices as well. There isn’t a single female voice for all female characters and a single male voice for all male characters (though, the actual number of voice actors used remains a mystery to me). 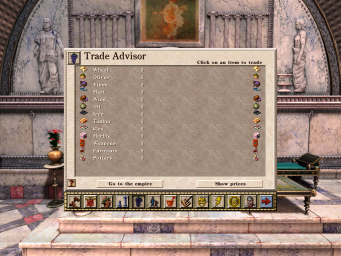 You have a chief advisor, as well as a separate advisor for each aspect of your city’s pulse.

For those not wishing to partake of the voice-acting, you also receive written instructions for every scenario. These are always detailed, and often contain tutorials that introduce a new concept that has not been used in previous scenarios. Right-clicking on a building will give you a brief description of it, along with pertinent information, such as the number of employees currently working there. There is also a question mark symbol that shows a help feature. Within that help feature, you can also access a small data file that will tell you more about that structure and its significance in the Roman Empire. Though, it should be noted that there is a disclaimer in the game itself stating that it should not be used as an educational tool.

The moral quandary that someone may face while playing is the concept of appeasing the Roman pagan gods. Caesar III features 5 gods: Ceres, goddess of agriculture; Mars, god of war; Mercury, god of commerce; Neptune, god of the sea; and Venus, goddess of love & fertility. In context of Caesar III, these gods absolutely exist, as failure to show them due respect will result in incurring their wrath, causing mayhem in their sphere of influence. Now, it is possible to turn god effects off, but you will still be required to build temples to improve your culture rating, and refusal to build temples will still worry and anger your citizens.

Caesar III is a fantastic and fun game. If you can find a copy of it, I can’t recommend it highly enough. With a peaceful and militaristic paths, and a virtually unlimited number of possible layouts for your city, the replay value on this title is nearly limitless. 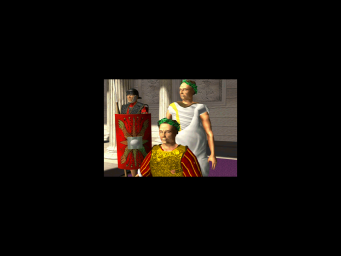 All deeds gather their just reward.