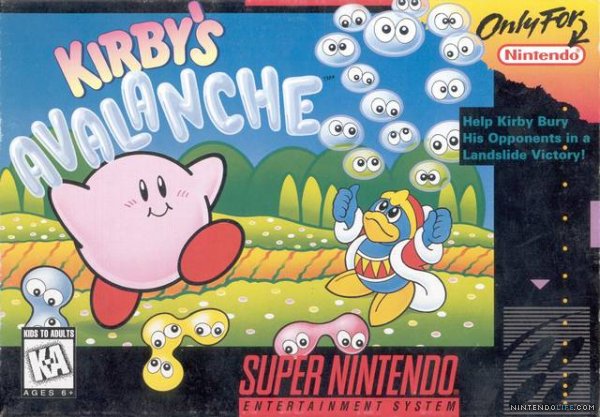 Similar to Dr. Robotnik’s Mean Bean Machine, Kirby’s Avalanche is a game that challenges players to use their brain to overcome obstacles. Progress can only be made by outsmarting the other opponent. Brawn has no hold here. 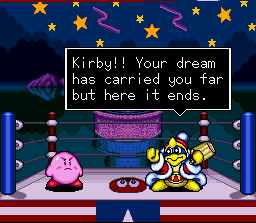 When King Dedede challenges the residents of Dream Land to the First Annual Dream Land Avalanche Competition, Kirby quickly joins the fray, along with a host of other colorful characters. With so much opposition, Kirby will need your help if he ever wants to win the much-coveted Dream Fountain Cup!

The story’s lacking a bit, isn’t it? Take it from me and don’t play this game for the story. The story’s there to create an excuse to have the game in the first place. Kirby’s Avalanche is praised for its play, not its plot.

Positive Elements
There really aren’t any “positive” elements in Kirby’s Avalanche because there’s not much of a story involved. The game encourages brainpower, but little else.

Language/Crude Humor
Before each battle, the boss and Kirby will have a brief conversation. These are usually innocent taunts with a corny punch-line tacked onto the end. One character tells Kirby to “shut up.” 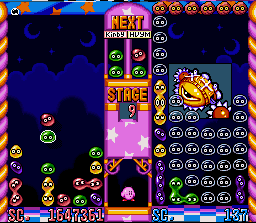 Kirby’s Avalanche is largely a battle of wit, making it the perfect challenge for the player who finds video games in general to be “too easy.”

Basically, the screen is divided into two sections: you and your opponent. Your goal is to keep your side of the screen from filling up and, oppositely, to get your opponent’s side to fill up. As different colored blobs begin to descend from the air, you must place them craftily around your space. Combining four blobs of one color causes them to burst, creating space on your side and sending extra bothersome blobs over on your opponent’s side.

Of course, things get really interesting when it comes to combos. If a player is witty enough, they can create combo after combo of bursting blobs, sending whole armies of unneeded blobs to his/her opponent. 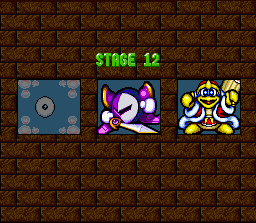 The game’s setup is very simple, making it easy for just about anyone to play. The only rule is that you’ve got to have a sharp mind that can processes quickly. As the levels progress, so does the difficulty… and the speed of the falling blobs. That means you only have seconds to place your colors.

Alternate modes, such as the VS mode, allow a player to battle another human player in the same manner as they would a CPU. It’s a lot of fun and makes for an interesting battle experience.

For those who are newbies to the game, there is a training mode in which the player fights three characters one after the other. This is a great place to practice before attempting the actual main mode. 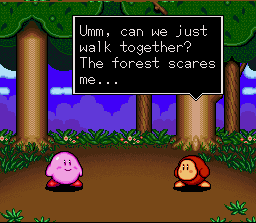 The music is generally repetitious but never really grating on the ears; a rubbery base and positive pitch give it a light-hearted, atmospheric tone. There are only a handful of different tunes used in the actual gameplay, so it can get old rather quickly. The music becomes more intense as the player begins to lose a round, however, which adds heavily to the experience.

Sounds “feel good” to hear. Hearing the “pop” of your blob combos feels rewarding, though some may find the vocal exclamations that tag along with them to be annoying.

Kirby’s Avalanche was my very first journey into Kirby’s magical world, as well as my first experience with Puyo Puyo gameplay. Ever since then, I have loved the style. It just doesn’t get old and it’s never “too easy.” Battling Meta Knight as a kid took me 20+ tries… battling him several years later still takes me 20+ tries. Simply put, this game is challenging.

If you’ve got a knack for puzzle-solving and using your brainpower, you’ll love Kirby’s Avalanche. It will put all of your wits to the test. If blowing stuff up is your thing, well… you’d better pass this blob-fest up.