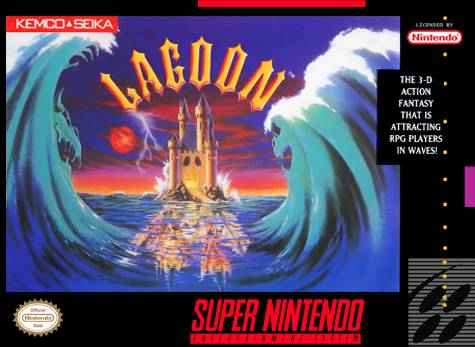 Mathias raised you from infancy. You can trust him.

You are Nasir, the child raised by the good wizard Mathias to be the Champion of Light. You were raised in the peaceable country of Lakeland, where people lived and worked happily. However, that peace was disrupted when demons start appearing and the waters of Lakeland became dirty. With the importance of clean water being without question, Mathias sends young Nasir out to investigate the connection between the evil monsters and the waters’ contamination.

Over the course of your adventure, you meet many other people, some of whom will give up crucial items and equipment. These include humans, elves, dwarves, gnomes, and nymphs. In typical RPG fashion, you will end up performing some sort of errand in each area, on your excursion to Lagoon Castle to confront the forces of evil. On your way, you will also meet up with several of the game’s antagonists, one of whom you meet very early on…

You will find several suits of armor.

Combat in Lagoon is simple at heart. You can equip one sword, one shield, one suit of armor, and one ring. You have a single attack, and the range of that attack is quite short. Even when you obtain noticeably longer & stronger swords, your striking distance does not change. This is, in my honest opinion, Lagoon’s biggest flaw. Fortunately, you pick up some magical artifacts in your travels, which will give you command of powerful elemental abilities.

You also have the ability to jump at will. While not particularly useful in most combat situations, you will find it necessary to hop over many holes, pits, chasms, & gaps along the way. In fact *minor spoiler*, there is a level later in the game that involves nothing but jumping, so, master this skill early on. Now, one area in which Lagoon does fall short of The Legend of Zelda is in defense. Your shield is primarily for show. It raises your defense stat, which helps reduce the amount of damage you take from enemies, but it will not block any projectiles. Additionally, all of your fun magic is completely useless against the boss demons. That’s right. All boss fights are hack ‘n’ slash, so put on a pot of coffee and prepare to go through a lot of trial and error.

It’s more of a butter knife than a sword, really…

Defeating enemies will grant you experience, which helps you level up. This will increase your HP, MP, and combat damage. You will also receive gold for purchasing (healing) items.

While the story progression is linear, the dungeons in Lagoon are anything but–the castles and caves you are expected to explore are a myriad of twists, turns, and dead-ends. In an age where recycled terrain was the order of the day to save cartridge space, this can prove vexing when two, three, or even four hallways look exactly the same. Take heart, however, because occasionally a dead-end will have a treasure chest sitting in it, and the extra fights will help build your strength and fatten your coin purse. 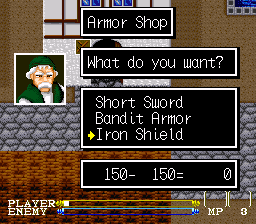 There’s no auto-equip here. Don’t forget to put on your gear!

Visually, Lagoon has a cartoonish charm to it that makes the game a bit light-hearted, even in the most tense situations. The environments themselves are diverse, and you’ll travel from verdant meadows to barren deserts to frozen caves. The numerous boss demons that inhabit the corrupted areas of Lakeland have their own personalities, and you never feel like you’re fighting the same (palette-swapped) boss twice.

Water is a motif in this game, and backdrops featuring distant bodies of water, or running waters, can be seen from many of the Lagoon’s vistas.

Fun Fact: The Sharp X68000 version of Lagoon contained cut-scenes, which were removed from the SNES version, likely because of memory constraints.

Atland, a town you know well.

The music of Lagoon is quite good. As I’ve referenced in my review of Shadowgate, Kemo-Seika knows what they’re doing in the music department. The score in this game runs the emotional gamut, with the Elf Field filling you with a sense of adventure & daring, to the Gold Cave which stirs within you with a sense of tension & apprehension. While some people have criticized the music of Lagoon as repetitive, I find it to be quite catchy. In fact, I have 3 different midi files from this game in my personal music folder: the prelude, Elf Field, and Philip’s Castle. Check them out and just try to dislike them. I dare you.

Some NPCs will give you important information or items, so talk to everyone!

Lagoon’s dialogue is easy to read, which is expected of a game that is rated E, for everyone. Like most (if not all) RPGs, many townsfolk will talk about the problems of the world, discuss their personal issues, or provide some generic statement about your quest that doesn’t really give you any new information. However, there are a select number of NPCs that will guide you along, giving you bits of information and the occasional item.

Through communication, the player can move through each town and pursue their goals, without feeling bogged down or lost. Lagoon, through its writing, helps the player along while managing to avoid leading the player by the nose. You never run into a situation where you are stuck because the programmers left you to figure some instruction out for yourself. There are also no false clues to keep your running around (and possibly swearing) for hours, like in Castlevania II: Simon’s Quest.

“Fun” Fact: Christianity is actually the religion of the world of Lagoon. However, only in the Sharp X68000 version of the game is this evident. All religious iconography was removed by Nintendo in both the North American & Japanese releases.

It never hurts to stop by the church to ask for a blessing before setting out on a dangerous quest!

All in all, Lagoon is a nice little game for what it is. While some people may put this game in and scoff just a bit, they’re likely to look at the clock at some point and realize they’ve been playing for 4 hours, and they just can’t put it down. Lagoon is definitely a game that’s worth your time and money.