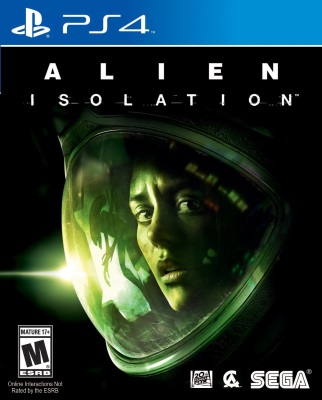 Alien: Isolation is deeply rooted in a harsh, deadly science fiction world. As such, it shares many of the same harsh tones as its parent films. With coarse profanity (including f***, g**d***, etc.), the language alone could be considered harsh enough to warrant an “R” or “PG-13” rating, were it a film.

On top of the language, Isolation depicts scenes of intense horror and violence, with many of the deaths culminating in either having your head bitten or chest impaled, or your being dragged into a vent. 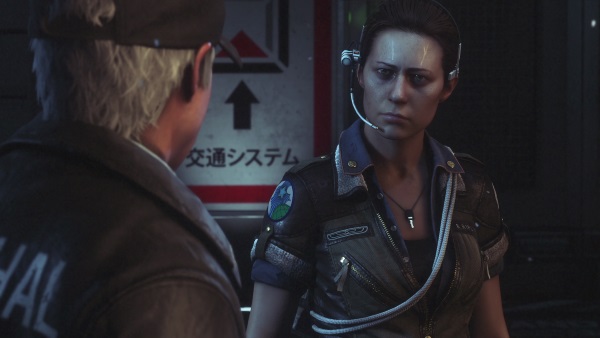 When I first started playing through Alien: Isolation, I was horrified. This game was going to give me a heart attack. I just knew it. As I spent time in the world and with the game, though, I became accustomed to the environment and actually grew to appreciate the tension you have to live with on the Sevastopol. Now I’m coming away with broader horizons, including a viewing of the original 1979 film, Alien. How is the journey alongside a xenomorph? Let’s dig in. 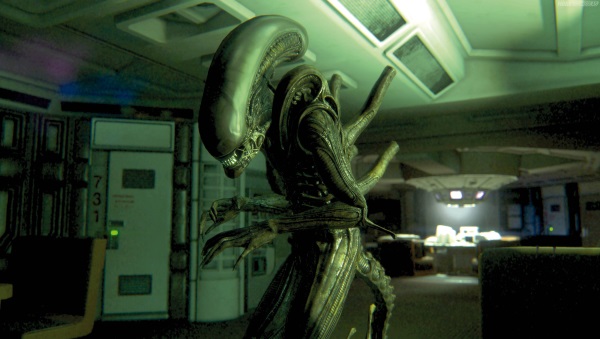 Set fifteen years after the events of Alien, Amanda Ripley is still searching for answers. The daughter of the Nostromo‘s Ellen Ripley, Amanda is approached by a Weyland-Yutani bigwig with a proposition. He has information that the flight recorder of her mother’s destroyed ship is on Sevastopol Station. Seeking closure, she agrees to go to Sevastopol. When they arrive, things are already bleak with much of the station in shambles and many of Seegson Corporation’s Working Joe androids going on destructive rampages. It’s not long before another threat is discovered, though.

Told through a series of in-engine cutscenes and logs stored on computers throughout the station, the overarching narrative paints a chilling turn of events that take Sevastopol from a lively hub of commerce to a ghost town full of folks scrapping to survive. It’s interesting to witness the story unfold, but the game ultimately feels like it is stretched far too long. It will take most folks twenty or more hours to complete, when it could have delivered a tighter experience in half the time. 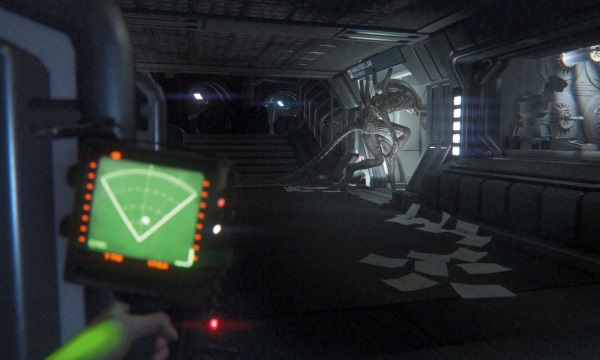 Alien: Isolation is built to deliver a tense, gripping game of cat and mouse. It sometimes fails to deliver on that goal, but when it succeeds it feels like something straight out of the movies.

The Sevastopol, much like the Nostromo, is a tremendous structure with a vast array of air ducts, rooms, floors, and sections. As you make your way around it, you need to be aware that, at any moment, our friendly neighborhood xenomorph could (and does) burst out of the vents, either taking you to your desired doom or taking a stroll while it looks for you. With the assistance of the motion tracker, you can always keep a general bead on the creature. This also has the added benefit of creating tension that draws you into the game.

As you work around, you’ll need to keep an eye out for a few things. First, always, always know where you’ll hide should the alien approach. Hiding effectively means surviving effectively. Unfortunately, it can start to feel like middle school all over again, jamming yourself in a locker only to emerge when the bully’s gone. 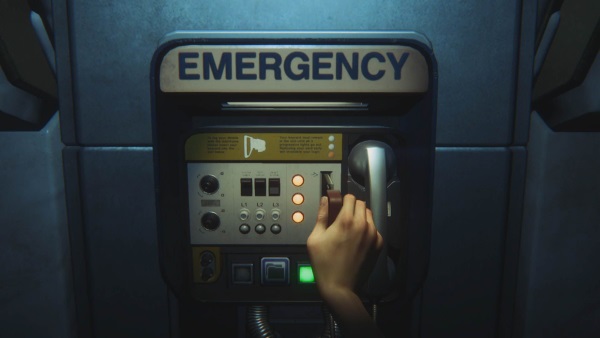 You’ll also want to keep an eye out for any computers or save points. Computers will often contain world-building backstory in the form of emails, audio logs, etc., as well as the occasional 4-digit code or door lock override. As a way of ratcheting up the tension, the game has a manual save system where you’ll have to walk up, insert a keycard, and wait for a period before you can save. This has mixed effects. First, it successfully adds tension by the fact you can be killed while using the station. I had one particular situation where I threw a noise maker and, as the alien attacked some enemies, I sprinted for the save point. The keycard went in, the lights started to blink, and… I looked down to see the alien’s spear-like tail explode from my chest. It was intense. Unfortunately, the system can also be a little frustrating. If it’s been awhile since you’ve saved, the game isn’t shy about setting you back every minute of your progress.

When the game begins, you’re alone in a dark and forbidding place. While that doesn’t necessarily change much over the course of your journey, you will gain a few new tricks along the way to help you survive. As you scour the space station, you can pick up scrap, blasting caps, ethanol, and more. With a few schematics you’ll pick up along the way, you’ll be able to build med packs, EMP mines, and more. My personal favorite, the noise maker, will let you distract the alien (often to the demise of hostile humans). All of that considered, while you can’t kill the alien, you aren’t left totally to the mercy of your situation. 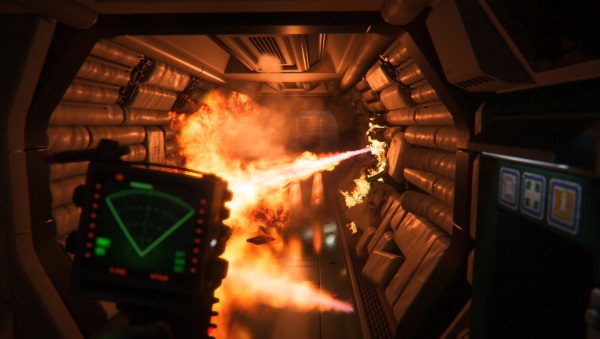 Having watched Alien in preparation for this review, I feel like I can, in good conscience, say Isolation has some of the finest attention to detail any game has ever given its source material. Everything on the Sevastopol, down to the cereal containers and door designs, are lovingly built straight out of the film. Like a time machine, it’ll take you right back to 1979.

As far as the music and environments go, Isolation masterfully employs sound and haptic feedback to make you uneasy. On the PlayStation 4, the controller will rumble and change LED color in sync with the motion detector. The scratchy, uneasy violins meshed with excellent use of the controller’s features help provide a wonderfully unnerving gameplay experience.

The look, the feel–the feel–Isolation has nailed it all. If I had one frustration, it’s that I hate seeing VHS tracking footage on my menus. 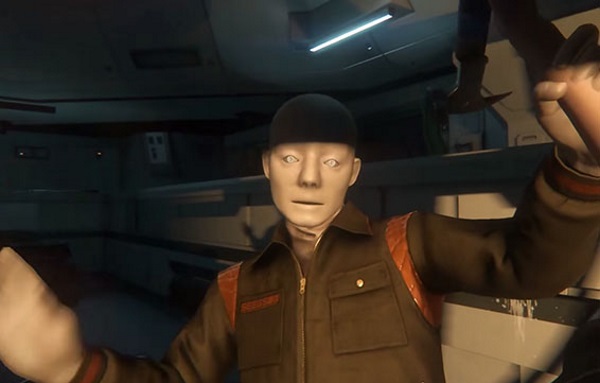 If you’re a fan of the Alien franchise, or if you’re looking for a game that will get your heart rate up, Isolation is a great choice. Through masterful use of sound and haptic feedback, the game does an excellent job conveying the desperation and tension you want from a game like this. Franchise fans will also appreciate more than a few nods to the source material. The game feels hampered by a narrative that could have been trimmed up, but folks who are seeking that creepy, run-hide-survive mechanic will be happy with Alien: Isolation.