Back To The Future 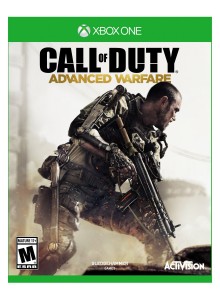 While it likely comes as no surprise, a game like Call of Duty: Advanced Warfare aims to bring the grit and tension of war into your living room with all of the explosive action of a big summer blockbuster. As such, the game features intense violence and explicit language.

In terms of violence, your standard big action shooting is here. You’ll literally be dropping hundreds of enemies over the course of the campaign (there’s a tracker that rewards you). There are also some cringe-inducing moments, like using your exo-suit bolstered strength to kill a man by crushing his face on pavement or throwing a car door at him.

The language is equally as intense. While the multiplayer call-outs aren’t dropping the F-bomb liberally like they did with Ghosts, Advanced Warfare‘s story contains plenty of salty language unfit for the ears of children. 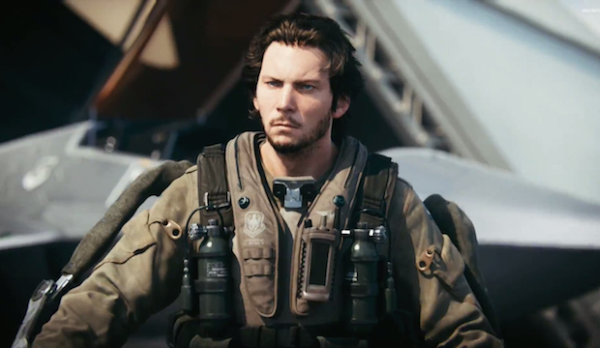 I’m one of those guys that yearly promises myself I won’t end up with another Call of Duty game but inevitably purchases it on launch. It’s like I have some kind of sickness. After Ghosts, I had said I wouldn’t be picking up any more Call of Duty titles at all, but when I saw Advanced Warfare‘s trailers, I knew Sledgehammer would be doing something to shake up the series and I immediately wanted in. What I ended up with pleasantly surprised me, and I continue to enjoy it on a daily basis. The heart of Call of Duty is back. 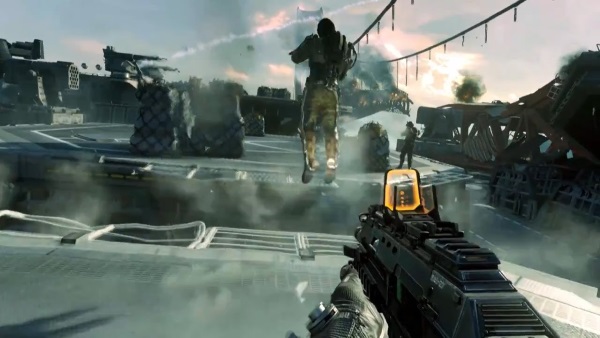 In 2054, the world’s super powers fight their wars by hiring private military corporations (PMCs). As the premiere PMC, Atlas has flourished. Their CEO Jsonathan Iron (Kevin Spacey) hired you, Jack Mitchell (played by Troy Baker), as a mercenary after you lost your arm in combat with his son. Equipping you with a new arm, you become on of the point men for the ever growing military corporation, but not everything is as clear as the surface appears.

The plot feels like something out of so many different modern war stories. PMCs fight our wars and prosper, growing ever bigger. While the narrative may feel rote, the action and performance delivered along the way is standout. Advanced Warfare does a fantastic job fleshing out each of the major characters along the way: Mitchell, Irons, and your comrades Gideon, Ilona, and Cormack are all given time and investment to flesh out their characters.

Advanced Warfare does an excellent job mixing up the gameplay to prevent things from becoming stale. There’s plenty of time as a boots-on-the-ground soldier, but you’ll also get several opportunities to shake things up along the way. At the end of the day, there’s nothing ground breaking here but Advanced Warfare delivers what feels like a top-notch summer blockbuster. I dare say this is one of the best Call of Duty campaigns since the watershed Modern Warfare. 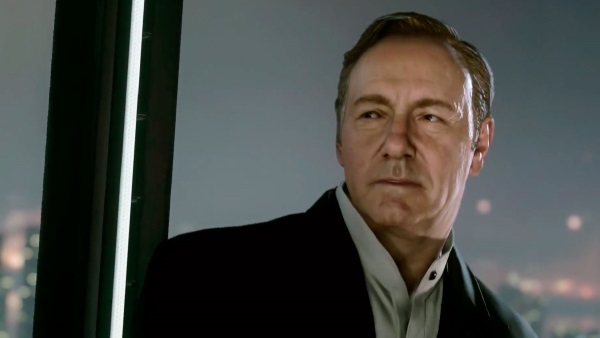 “The Illusive Man” comes back down to Earth as the CEO of Atlas?

If you’ve played a Call of Duty game, you’ll feel right at home with Advanced Warfare…for the most part. Moving through cities, targeting and shooting all still feel like a traditional FPS. Advanced Warfare welcomes players with several new mechanics to freshen things up though.

This time around you’re equipped with an exo-suit. These futuristic exoskeletons can augment everything from your strength and jump height to granting you special abilities, like sonic blasts and even a temporary slow-motion effect. These shift throughout the campaign depending on the mission.

You’ll see plenty of other futuristic gadgets along the way: mute bombs to contain sound within their blast radius, grappling hooks to zip around the battlefield, drones, grenades that can home on enemies or paint targets, and much more. Yes, your standard assault rifle and shotgun are here, but so are plenty of other toys to play with. 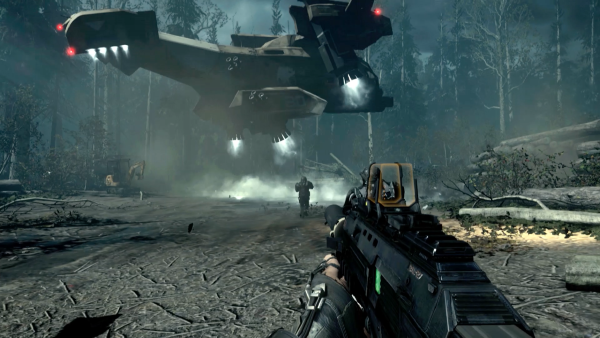 On top of an excellent campaign, Advanced Warfare is back with a vengeance on the multiplayer side this year. In keeping with other fast-paced shooters this year, like Titanfall, everyone is equipped with an exo-suit that grants double-jump, air dash, and suit-assisted dodging. This notably changes the dynamic of maneuverability by keeping things fast and lively in every match. It also adds a dimension of verticality to the action.

In Advanced Warfare, you’re initially granted five loadouts. Each loadout gives you a point allotment to spend however you like. You can equip up to two weapons, various attachments, grenades, perks, and score streaks. As you play and level up, you can unlock new weapons and get “supply drops” – containers that give you new versions of weaponry or new articles of clothing to customize your avatar.

Character customizing is something else that’s been taken to a new level in Advanced Warfare. You can totally customize your look including eyewear, shirt, pants, gloves, boots, and even your exo-skeleton. You can also earn some neat items based on your performance that will expire quickly, like a WWI-era pilot’s cap and goggles. It’s a fun system that ensures you have some agency in your character.

Overall, I feel like Advanced Warfare‘s gameplay has brought some exciting changes with it and re-energized the franchise. I will be playing this one for quite some time, and my faith in the series has been renewed if only for another season. 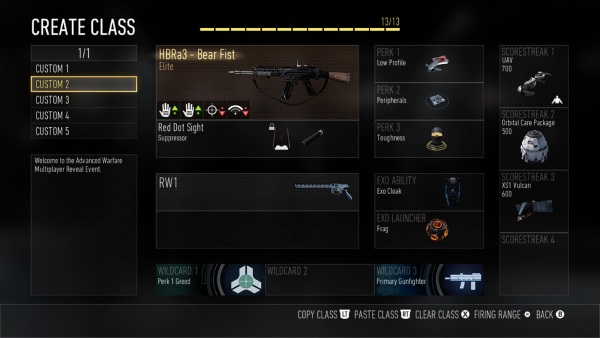 Advanced Warfare is a great looking game. Sledgehammer went out of their way to make everything feel like it belonged in a world set forty years in the future. There are a lot of big action moments that, just like any Call of Duty title, aim at keeping your heart racing and your senses heightened. The look, feel, and animation of characters feels fantastic. This is carried out by the performances of Spacey, Baker, and their ensemble in the virtual realm.

The sound design in the game is also top notch. A bass and electronica-filled soundtrack helps drive home the tension and action on screen. The main characters’ voice acting is great. The high pings of bullets striking nearby began to grate on me after a while, though. It sounded like a child with a box of tightly strung rubber bands getting constantly plucked. 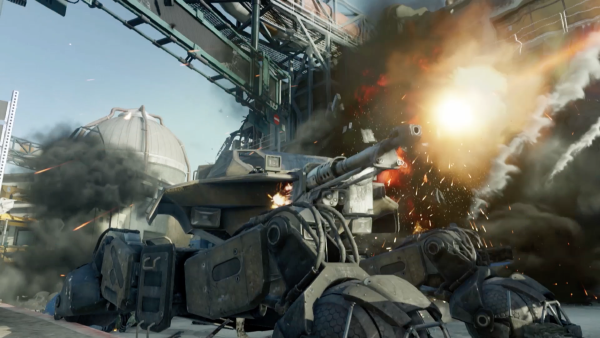 The Call of Duty franchise will always have its naysayers. I’ve often found myself in that crowd. Sledgehammer Games and Advanced Warfare have renewed my faith in the franchise, though. With a fun campaign, excellent on-screen performances by the actors, and intense, fluid action, Advanced Warfare is the shot in the arm the series has needed for several years.

If you’re a fan of Call of Duty, Advanced Warfare is a no-brainer. If you’re on the fence, you should definitely consider giving it a try. I’m glad I did.

Call of Duty: Advanced Warfare feels like a great shot in the arm for a series that was starting to get stale.