When I think about my favorite fictional video game creatures, at the top of the list, is the Toads. This adorable race of mushroom-like people have been my favorite ever since Super Mario Bros. 2. What’s not to love? They’re loyal, they have perfected space travel, and they’re fun guys. (Get it?) Any chance I get to play as one (Mario Kart, Super Mario 3D World, etc.) I always choose them. So of course, I was excited to get the chance to play Captain Toad: Treasure Tracker.

Just a pair of fun guys.

Our first introduction to this style of game came in the Super Mario 3D World on the Wii U. In a few stages you could play as Captain Toad. In these levels you had to collect stars and navigate, all without the ability to jump. At the time of the game’s release, there was quite the community on the Wii U’s Miiverse calling for Nintendo to make a Captain Toad game. The creation of Treasure Tracker is a good sign that Nintendo is (hopefully) listening to their fans.

Truthfully, there’s nothing to warn about with Treasure Tracker. I thought long and hard about what I could possibly put into this section, but just couldn’t think of anything! This game is safe for the whole family. 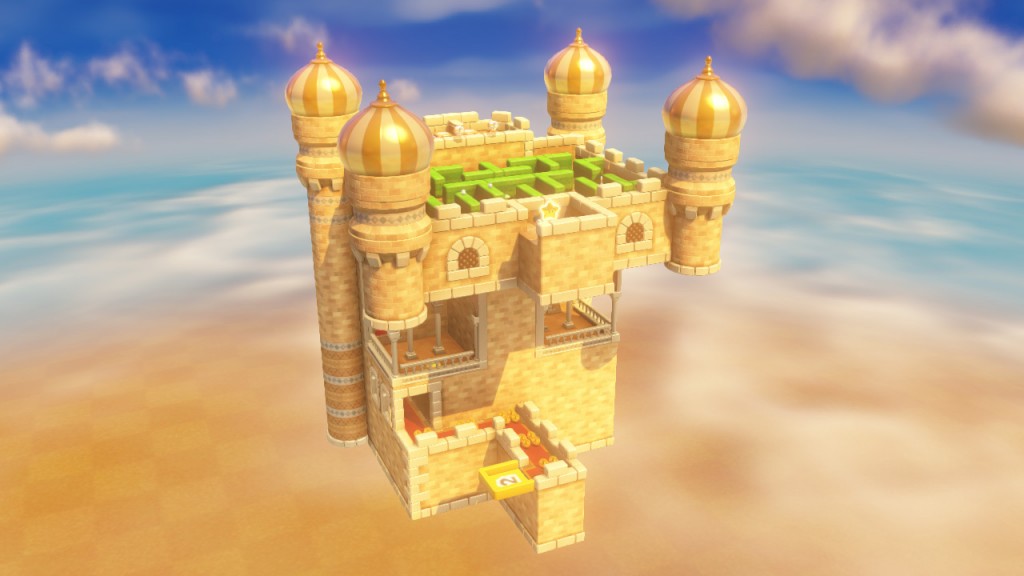 One of my favorite stages!

Captain Toad: Treasure Tracker plays almost exactly like it does in Super Mario 3D World. On most levels, you control Toad and navigate a 3D diorama-style stage in order to collect diamonds, coins, and a golden star. Good news though, Nintendo added a few new elements for this game. You can make use of power-ups like the super pickaxe, double cherries, turnips, and more. A few stages also use a mine cart and offer a first-person perspective as you shoot turnips at enemies and blocks.

Overall, the gameplay is very simple. Many stages introduce different elements to change things up, but it never gets too complicated. Each stage offers a main goal (obtaining a gold star), but also has an optional hidden goal—like defeating all enemies or collecting a certain amount of coins. These goals offer you another opportunity to play a level. Once you figure out the more common hidden goals, however, it’s easy to accomplish these in one try.

The only bit of complexity I experienced was during the mine cart levels; you have to use the gamepad’s motion to look around. Any other level gives you the option of maneuvering the gamepad or using the control sticks to move the camera. The gamepad’s motion controls are a bit too sensitive, and on levels when you’re forced to use it, a bit awkward. The problem with this complexity is that the challenge is in overcoming the controls rather than overcoming the level—which is not the same thing. 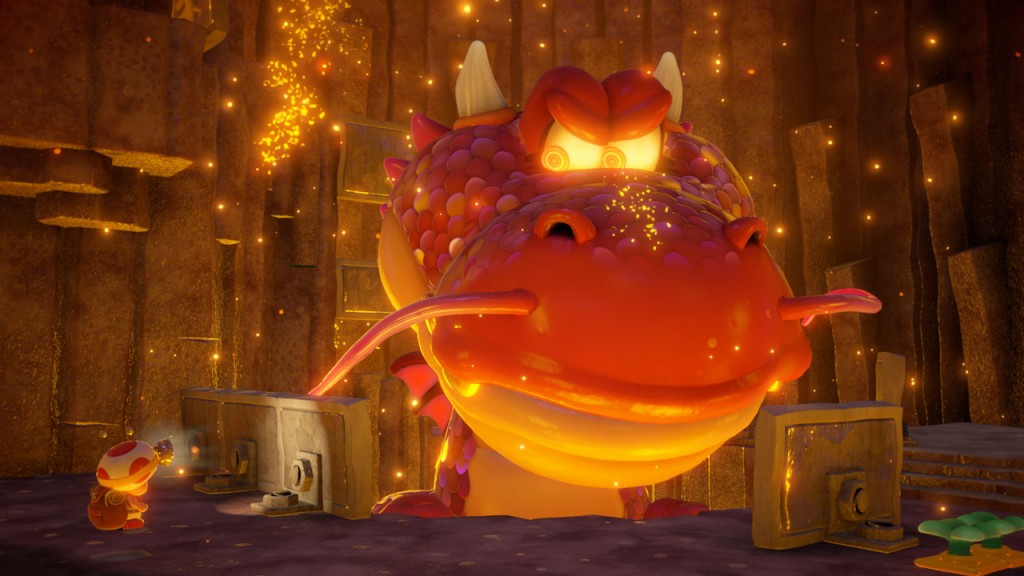 That dragon is throwing shade at Captain Toad.

There are boss fight levels in the game that add a little excitement to the mix. Again, these levels aren’t too difficult for the average gamer. One minor complaint: there are only a few different types of bosses, and you fight the same characters a couple of times. As varied as the levels are, I wish we could have seen a few more bosses. This may have been a play taken from Super Mario 3D World. In the original game you fight the same mini-bosses multiple times with increased difficulty. Perhaps with Treasure Tracker designers wanted to follow a similar plot.

Though this game boasts more than 70 stages, it lacks replay-ability. After you’ve collected the stars and completed the optional challenges, there isn’t any reason to go back and replay levels. While there are certainly some that I will go back and play (because they were fun), the levels don’t take long to complete. Replaying them doesn’t really add much to the game.

Where Treasure Tracker really shines is in design. Each stage is unique and intricate in its details. Though there were some repeating elements, each level feels fresh and new. I loved seeing the details. Not only did the designers pay close attention to lighting (sun, night, and sunset), they really focused on the subtleties too—like an environment’s grass and flowers. Seriously, each level is its own unique, little world. I enjoyed being able to see what the next stage design would be. 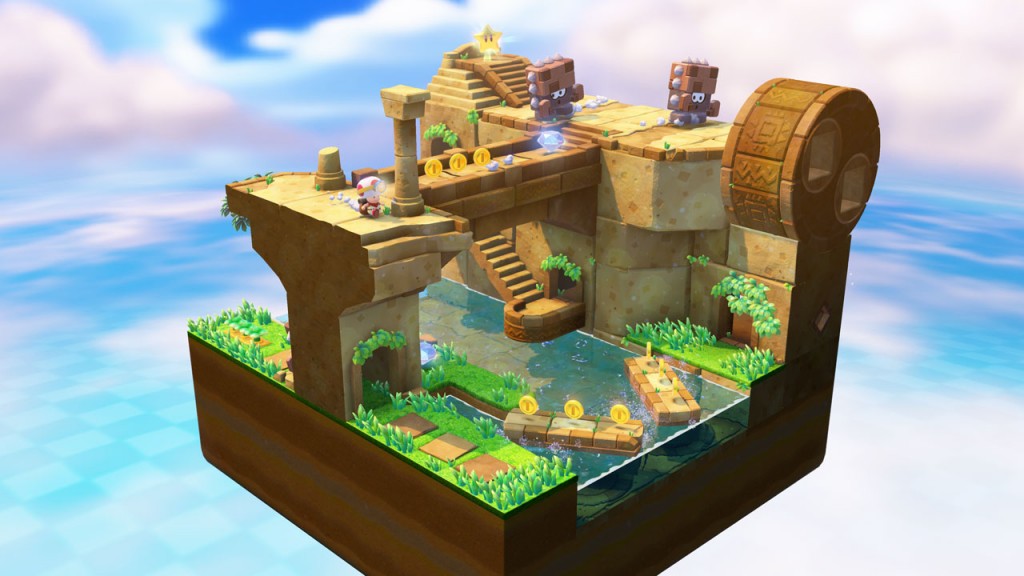 I want to go to each of the levels. They look so much fun!

The game also excels at its hidden areas in levels. There were so many times that I found myself having to search for a hidden diamond in unexpected places. I definitely experienced a few “a-ha!” moments as I figured out how to get to a certain area. Also, as you’re playing each level, keep an eye out for 8-bit Luigis. This is a callback to the Super Mario 3D World which also had these Luigis hidden around stages.

Treasure Tracker isn’t the type of game that will wow you with graphics since it really doesn’t push any boundaries. But there were many times when I smiled as I took in the charming designs. Even Toad and Toadette’s expressiveness is delightful; they’re so happy to get a star and so afraid to see a boss. 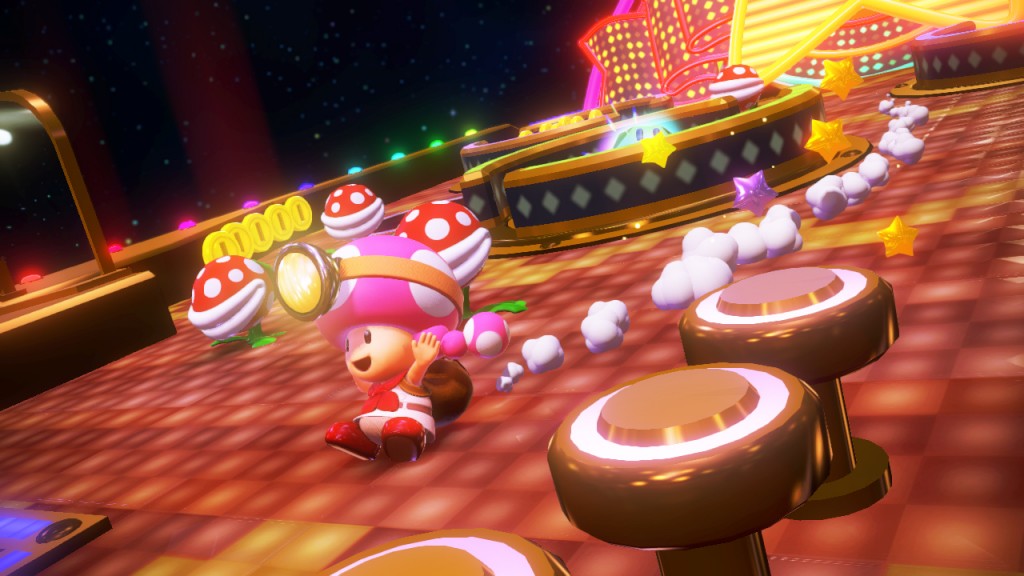 You will share the same expression as you play the game.

Captain Toad: Treasure Tracker is a great game for the whole family. The simplicity of the gameplay will be attractive to casual players looking for a light-hearted, stress-free adventure. However, the lack of intense challenges could seem boring to serious gamers looking for a difficult puzzler. This is a great game for those who loved the Captain Toad levels of Super Mario 3D World. Adults and kids alike will enjoy the steady gameplay and charming designs. And of course, the $40 tag makes this game worth the price.

Have you picked up Captain Toad: Treasure Tracker? Do you think Captain Toad’s a fun guy?

If you're looking for a stress-free and fun puzzle platformer, check out Captain Toad: Treasure Tracker. If you loved these levels in Super Mario 3D World, then you will love this game.