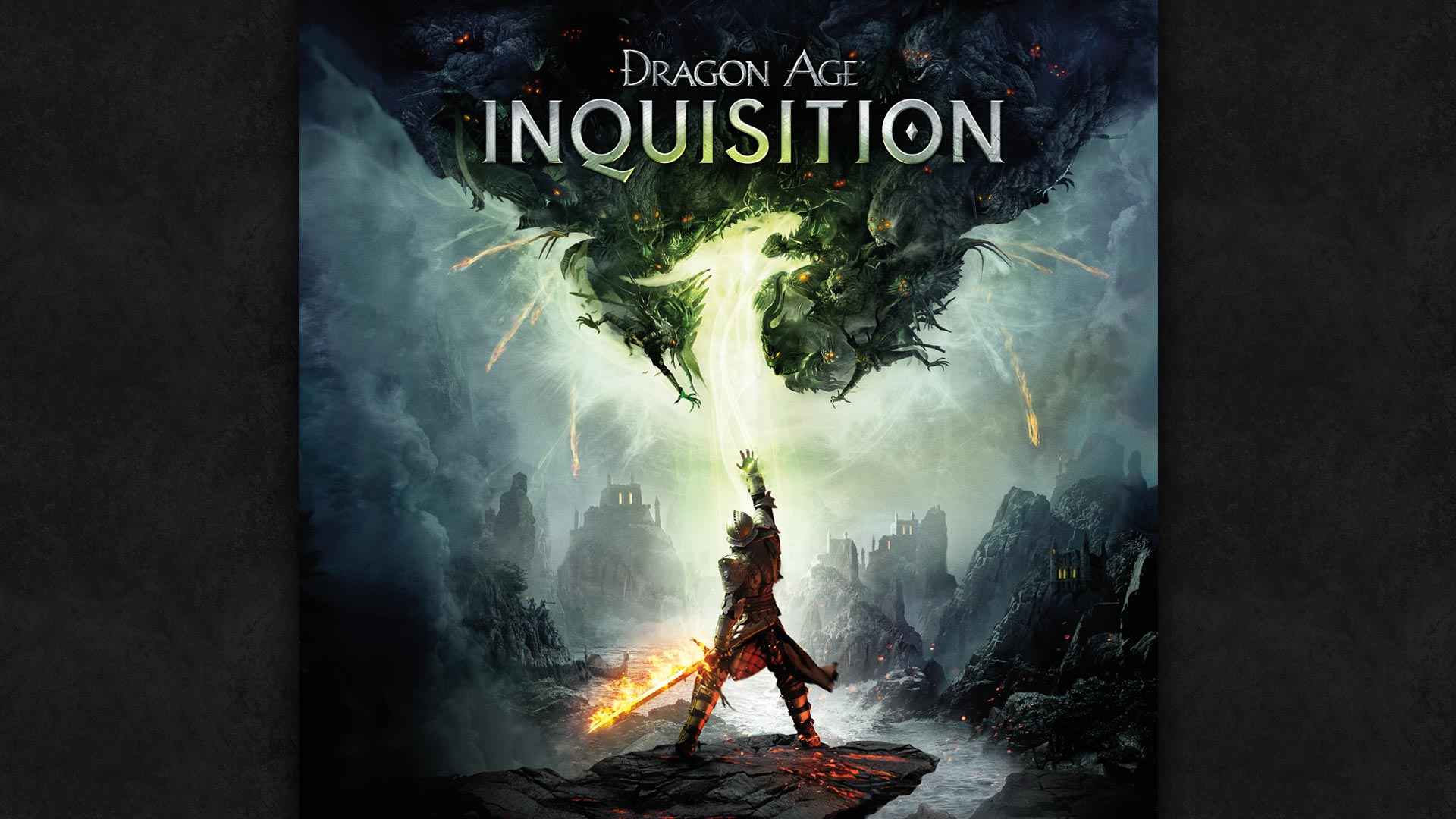 By Christian review, I have determined that Dragon Age Inquisition is absolutely not a game that young, impressionable Christians should play! 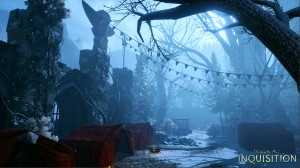 Every region has areas that can be claimed for The Inquisition in order to grow your influence.

Dragon Age Inquisition takes place one year after the events of Dragon Age II, in the year 9:41 Dragon. The mages are now in full rebellion and the circles fallen. The Templars have split off from the Chantry, and now oppose the mages in open bloody conflict. The Grey Wardens have all mysteriously disappeared.

Orlais is engaged in a civil war. Ferelden has not fully recovered from the blight and civil war that took place there. The Free Marches are ablaze with activity after the events surrounding the Champion of Kirkwall and whispers of a possible Exalted March to quell the conflict.

The only chance for peace was a conclave within the Temple of Sacred Ashes between most of the Grand Clerics of Thedas and Divine Justinia herself. However, this last ditch effort to stem the tide of chaos was shattered when an explosion destroyed the temple and ripped open a massive rift in the sky. The Breach, as it came to be known, started loosing hideous demons all over the land.

Suddenly, a lone survivor of the temple’s destruction is found. This individual possesses a strange mark on their hand that seems attuned to The Breach in some way. The bearer of the mark has no recollection of how they arrived there, the temple’s explosion or his/her role in it. That person is you. While your guilt or innocence in the death of The Divine remains to be seen, sentencing will have to wait as there is work to be done. 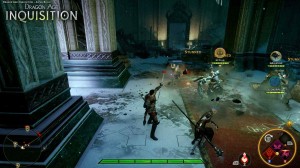 Cross-class combos are still here. Shattering a frozen creature is still my favorite.

With more ground to cover than ever before, exploration is at the forefront of activity in Dragon Age Inquisition. You will make excursions into the many wild areas of Ferelden and Orlais, including areas mentioned but never previously seen.

Within these areas are tons of side quests, which will actually consume more of your time than the main story itself. However, many of the side quests you complete can improve the power or influence of The Inquisition. For example, you might be able to recruit someone you help as an agent of The Inquisition, which will in turn help your advisers do their jobs better.

In combat, you still have a four-character party, composed of members fitting the three major archetypes of warrior, rogue, and mage. However, in true Dragon Age fashion, you can choose different talent trees for yourself and your party members, in your pursuit of a perfect combat team to suit your play style.

Sadly, anyone who had the dream to play a healer is in for a bit of a shock. BioWare has done away with healing magic altogether. Instead, mages are given a barrier spell that shields party members from damage. I find this decision flawed, because it essentially forces you to spend talent points on healing for all of your mages. Instead of just being able to learn Heal and then go specialize in a different talent tree, you have to devote at least part of all mages’ development to the Spirit tree, lest your party become super squishy. The only “healing” magic to speak of are a revival spell and a contingent revival spell.

Tactics have likewise been removed, so micromanagement junkies like me–who pride themselves on creating game-winning custom tactics for their party members to follow–have much to lament. Instead, we are given a tactical camera, which when activated, gives you an overhead view of the battlefield. This lets you position party members and choose certain actions for them to take. You can also move the action forward frame-by-frame an make adjustments as necessary.

While it’s a nice little feature in theory, I honestly only ever used it twice: once during the tutorial, and once much later to tell Varric that he doesn’t have to stand underneath a dragon in order to properly shoot it. The only tactics present here are a few little decisions, such as determining the pain threshold at which a party member drinks a health potion.

When back at your base of operations, you can customize your gear, talk to your companions, and start events that propel the story forward. In your War Council chamber, you survey the map of southern Thedas and assign missions to your advisers. Your advisers then send out their dignitaries, spies, or soldiers to deal with the various problems and concerns around the region. These missions can garner useful pieces of gear, bonus influence, or monetary rewards. Additionally, you can dispatch crews out into the countryside to collect crafting materials.

Finally, what would a Dragon Age game be without a little romance? Not everything has to be monster-slaying and politics after all. You have eight romance options to choose from: Six party members and two advisers. BioWare had stated that the sex scenes would be “mature and tasteful.” Unfortunately (from a review standpoint), I cannot attest to this. I managed to pick a romance option that contains no sex. In fact, all it amounted to was a few make-out sessions. So, while I can warn you that Dragon Age Inquisition does contain sexual content, I cannot do so from firsthand knowledge. 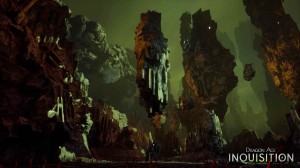 Once again, you have the opportunity to travel into The Fade. What secrets await you there this time around?

BioWare truly outdid themselves in producing expansive environments for the Inquisitor and company to explore and exploit. The places you can go include hot deserts, frozen mountains, lush forests, peaceable fields, and murky wetlands. You can also travel to the Orlesian capital of Val Royeaux.

However, the amount of city you are able to access is significantly less than in the cases of Denerim or Kirkwall.

While impressive in scope, the visuals of Dragon Age Inquisition are not done justice by the Xbox 360. In addition to a woeful level of detail, the loading times were insane. This does not just apply to area transitions either.

Elements of the environment were sometimes drawn right in front of me, while the draw distance for some other objects was questionable at best. Additionally, I experienced a significant amount of lag in combat, particularly if I used the Whirlwind ability. As if that were not enough, menus took forever to load. It was a very common occurrence to scroll to a party member and wait for them to appear in the menu screen. After they appeared, I would then have to wait for the various levels of detail to slowly add. Take my advice and wait to play this game on either Xbox One or PlayStation 4. 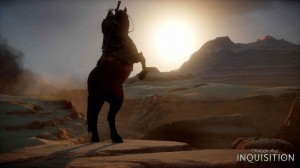 New for Dragon Age: mounts! There are a goodly number of mounts to find, too. Try to find them all!

The music of Dragon Age Inquisition is nice, if a bit subdued in certain circumstances. While I make it a point to brag about video game music as much as possible, the background music seemed to live up to the literal meaning of its name, and stayed as part of the background. In other words, during much of the game, I did not notice the music hardly at all.

I am unsure if this is because of some sound setting I failed to tweak, another weakness of this title on the Xbox 360,  or the result of intentional design that prioritized ambiance over accompaniment.

Whatever the reason, the music I did hear was quite standout, especially during boss battles and dragon fights. The FMV cut-scenes also include some very good music. 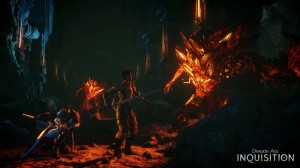 This bad boy probably doesn’t want to talk. To arms!

Dragon Age Inquisition has quite a long script. Even minor and secondary characters are given a chance to display their personality through the hours of fully-voiced dialogue.

Given the decision-based nature of the world state, it stands to reason that you will not be able to experience all possible dialogues in a single playthrough. So, once you finish the game for the first time, go back to the Dragon Age Keep and rearrange the tapestry, and see what new surprises await.

As with any good game, there are elements of comedy and lightheartedness. However, there is also coarse language throughout, and this installment is the first to include f-bombs (at least that I was able to notice), so keep the kiddies out of the room while you’re playing.

Spiritual Content: Anyone who has played the first two Dragon Age games already knows that the world of Thedas has the Andrastrian Chantry, a religion that mirrors Christianity in many ways. There are also the pantheistic elves, the Old Gods of Tevinter, the dwarves who venerate The Stone and their ancestors, and the Qunari who live only by the word of The Qun.

All of these systems of belief have varying levels of spirituality that I will not delve into here. There are numerous sources on the internet where one can learn more about the in-game lore. All I will say is that this world and its lore are the product of writers, and any opinions expressed by NPCs (non-player characters) on aspects of Andrastrianism should not be taken as a commentary on Christianity, despite the numerous parallels.

Homosexuality: All of the Dragon Age games have included romance options that are bisexual. This has not changed in Inquisition, but instead goes a step further. There is now a gay character (Dorian) and a lesbian character (Sera), and they can only be romanced by same-sex party members.

The replay value that is inherent to the tapestry is rivaled by the fact that it took me 107 hours to complete my first playthrough, and I didn’t even do everything. Additionally, the epilogue left me feeling rather unfulfilled, as it is very short and answers few questions. There was no “where are they now” narrative for the main characters except for a couple party members who are shown to be more important than the game seemed to suggest.

I can tell you succinctly that it will be some time before I pick this game up again. If you truly want to appreciate Inquisition, play it on the Xbox One or the PlayStation 4. It plays terribly on Xbox 360. Despite some questionable design decisions, Dragon Age Inquisition is a good game.

While far from being called epic, Dragon Age Inquisition has hours of action and adventure that hardcore fans will appreciate. It takes some of the best aspects of the first two games and improves upon them, but also repeals a few, including RPG staples like healing magic.