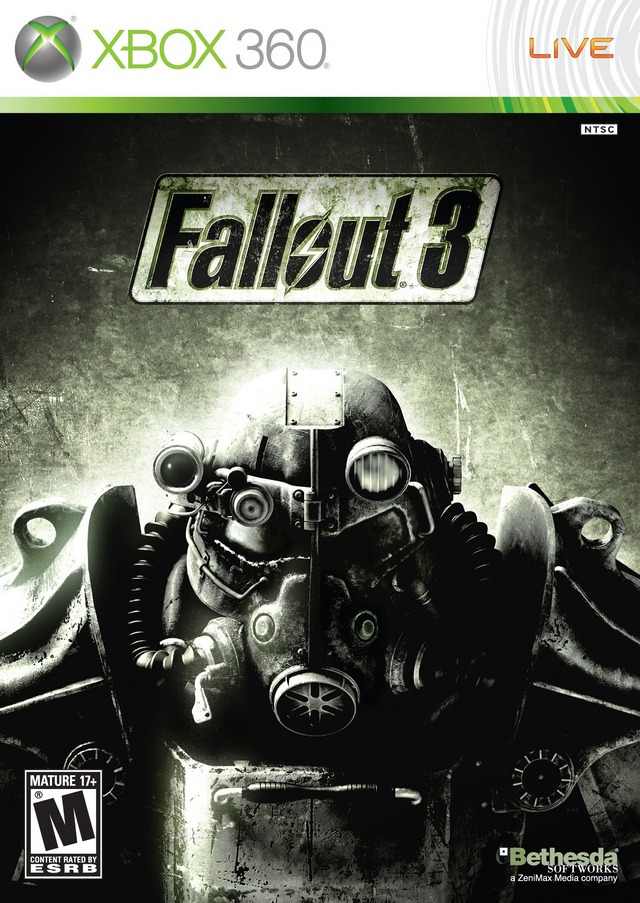 By Christian review, I have determined that Fallout 3 is absolutely not a game that young, impressionable Christians should play!

Fallout 3 is a continuation of the already established Fallout storyline. During the Great War in 2077 the nuclear powers of the world engaged in a two-hour series of nuclear bombardments. This left the landscape of the participants in a sorry state. The pockets of people lucky enough to be safely locked away in their vaults during the conflict continued life underground largely, if somewhat claustrophobically, uninterrupted. Over time they spawned new generations of humans.

Now in 2277, Fallout 3 introduces a new hero, who must leave home to search for a loved one. Along the way, he/she becomes embroiled in a clash between the Enclave and The Brotherhood of Steel that will determine the future of the Capital Wasteland. 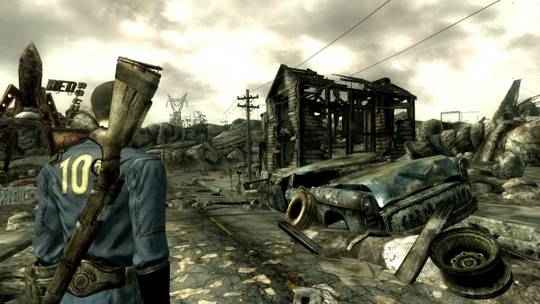 Nearly the entire landscape is as desolate and ruined as this.

You start by playing through the events of your birth, infancy, childhood, young adulthood and adulthood, then the game begins in earnest. During these various growth periods, you will set your character’s appearance, roll their base stats and abilities, and learn the basic controls of the game.

Essentially, it’s a playable tutorial. While you cannot skip it should you decide to play through a second time, you do get a separate auto-save right before the exit to Vault 101 (your home), which allows you to go back and rearrange your vitals in order to play a new character.

Fallout 3 takes places place in the destroyed remnants of Washington D.C. It is a massive open-world, and in true Bethesda fashion, you are not required to pursue the main quest’s objectives upon emerging from the vault. Gameplay is as would be expected from a Bethesda RPG game: it is very free. You explore the environment, collect items, perform quests, upgrade your equipment, make friends and enemies, score yourself some cool new digs, and yes, eventually save the world.

Steve’s Tip: Some people who have played through this game were shocked to find out that there is a flashlight that you can use in conditions of poor illumination. I was one of them, as I did not find out about it until after around thirty hours of play. So, for the benefit of those playing for the first time, you turn the Pip-Boy flashlight on and off by holding down B in the 360 version, circle in the PS3 version, or the TAB key in the PC version. Now, you can explore anywhere without straining your eyes or simply giving up and leaving. 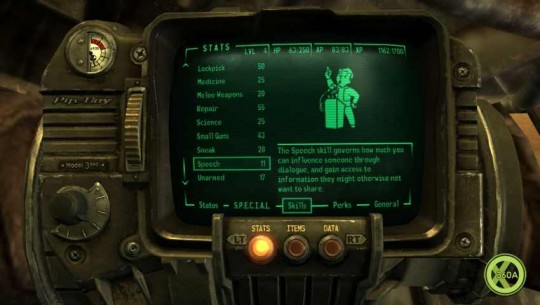 Your Pip-Boy helps you keep track of everything. It even knows the types and quantities of equipment you’re carrying. Could it be self-aware?

The world of Fallout 3 is incredibly detailed. Everywhere you look in the Capital Wasteland, there is evidence of a widespread nuclear disaster.

There are obliterated highways, downed high-tension power lines, irradiated oddly-colored water, woefully deformed people and a plethora of deserted buildings. Particularly patriotic players may experience a palpable sense of shock when they gaze upon the ruins of their beloved nation’s capital. The crumbling ruins of the Washington Monument can be seen from far distances, and serves as a constant reminder of the bleak reality you are facing.

While this building may be without context for The Lone Wanderer (you), you as a player form a combined perspective with your avatar. Day changes to night, as in many modern open-world games, with transitions that are seamless and appropriately rendered. Though some make the argument that Bethesda was a bit too generous with nighttime ambient light, I personally don’t like exploring overland at night anyway, so I just wait until the sun comes back up.

Beyond the environment, the inhabitants of the Capital Wasteland are similarly well-drawn. They are believable enough to provide proper immersion, though their faces do tend to lack appropriate expressions. Explosions are big and satisfying, as enemies or what’s left of them go flying after being subjected to grenades, mines, or big guns.

Finally, while the Capital Wasteland is large and realistic, it is demonstrably bland in appearance, and continuously staring at the same ruined, beige landscape can make your brain numb. 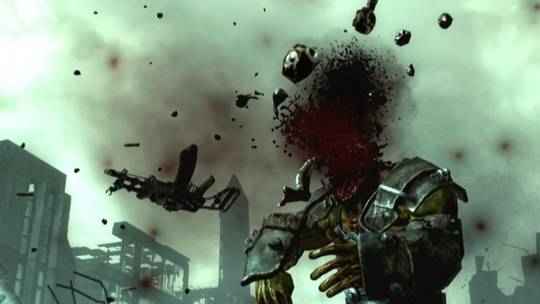 You can end a fight quickly with a well-placed shot.

Fallout 3 does contain ambient sounds like steaming pipes and high-frequency buzzing, characteristic of derelict facilities. Your Pip-Boy also features a Geiger counter, which will start audibly measuring if you come too close to source of radiation.

If you want different music than what is provided in Fallout 3, you have to tune your Pip-Boy to one of the radio stations broadcasting throughout the Capital Wasteland. Each has its own track listing of songs it cycles through for as long as you’re tuned in. The soundtracks consist of retro music, fitting with the game’s retro-futuristic themes, from pre-1960’s America.

The voice-acting is well done too. The game begins in traditional Fallout fashion with opening narration by actor Ron Perlman. There are other characters who are central to the plot who are likewise well-voiced. Sometimes the voices of some NPCs (Non-player characters) can sound a bit over-produced, but overall, the speech manages to convey emotion effectively. The tone and cadence of these characters are proper, so you won’t have issues with the voices being too loud in relation to the music, but the option to tweak these various sound levels exists as well.

The dialogue in Fallout 3 is well-written, if rather profanity-laden. There are literally hours of dialogue to read or listen to, should you engage in every conceivable conversation possible in in the game. You are given many, many conversation choices throughout, to portray yourself as nice, tough, mean, or sarcastic.

Additionally, there are various books and missives that you come across in your travels, which provide information about the post-apocalyptic world. The writers do a good job of providing clues and propelling the story forward through the game’s dialogue, and one piece of writing in particular will spell victory or defeat in the game’s climax… 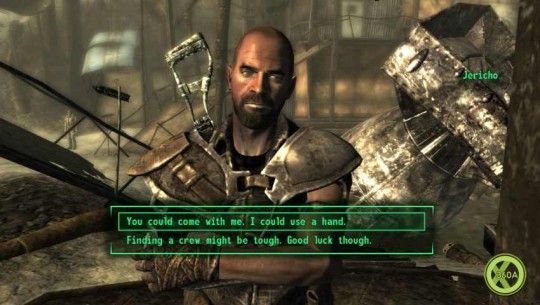 You have the ability to make permanent friends… or enemies.

This is without a doubt a very objectionable game, and is rated M for mature for very good reason.

There is highly-detailed gore, with headshots occasionally making someone’s head explode in a burst of bloody, brainy pulp. In fact, there is even a perk called Bloody Mess, that increases the damage from your attacks and makes kills even more messy and violent. This game is also unapologetically vulgar in terms of the uncensored language used.

Another concern is a religious cult called The Children of Atom. These people worship the Atom, and believe that every single atomic mass contains an infinite universe. Therefore they see the nuclear destruction caused by the Great War as a holy event, with an unconscionable number of universes being created through atomic fission. They similarly see death as a blessed event, as a person begins to become one with Atom.

In the midst of all this, Christianity does play an interesting role in the game. A passage from the book of Revelation is mentioned numerous times, and is woven into the plot. That’s as much as I can say without creating a spoiler. Despite this, the game remains quite offensive, so do not play it if your sensibilities are easily rattled.

Fallout 3 is a good game, if you can get past its coarse threads of language and rampant gore. There are plenty of quests outside the primary one to keep you busy for hours. There are also five DLC (downloadable content) expansions, with Broken Steel essentially being a continuation of the main story. It also raises the level cap from 20 to 30. The Fallout 3 Game of the Year Edition has all five DLC packs included, so if you’re going to start playing Fallout 3, that’s the route to take. 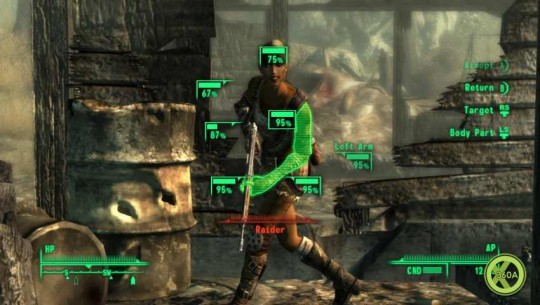 In V.A.T.S., you can take your time and choose your shots carefully.

Playing Fallout 3 is like playing an Elder Scrolls game with guns and grenades. It's explosive fun, but not for the whole family.